As Harvey recovery aid starts coming in, some Southeast Texans are facing tough decisions — and asking hard questions. Here's what you need to know:

• Some updates out of Houston: Start off with this read on how low-income residents in the car-centric city of Houston are still struggling after Harvey destroyed their vehicles. It's the domino effect — those affected from the storm already have to buy new clothes and find new places to live; most can't do that without income or transportation, and many in southeast Texas now have to repair or buy new cars. Also in Houston, the last 900 Harvey evacuees left a convention center there on Monday and moved to a community college nearby. Progress, yes — especially when you consider the fact that more than 10,000 people were housed at that center at the peak of Harvey's recovery efforts.

• The continuing aftermath: An AP report found several Houston-area Superfund sites leaked possible cancer-causing chemicals during the storm. Also, the Army Corps of Engineers is facing hard questions from some for its late-night decision to release water from two reservoirs in the middle of Harvey — a decision that flooded several neighborhoods in West Houston and ended with the drowning deaths of two people. There's also concern about how students living in areas hit hardest by Harvey will catch up; schools across the state have endured extended closures thanks to damage, and in a way, many of those students are still in the eye of the storm. But despite all that and the several hurricanes that have already — or are set to — hit the U.S. coast, folks are still flocking to the area.

• News from D.C.: U.S. House Speaker Paul Ryan is set to come to Houston on Thursday, where he's scheduled to tour areas damaged by Harvey. Details per a spokesperson are coming soon. Also, the federal government has sent Texas more than $1 billion in funding for recovery efforts so far — but several officials have said there's no way to predict how long they plan to offer Texas aid or how much money the state will need for relief efforts. Here's a quick rundown of how FEMA is allocating money to individuals and businesses affected by Harvey.

• An elderly woman in North Texas sold her home and wired $200,000 to a mysterious bank account. It was all a scam. Now, there's a new Texas law aimed at helping the state's elderly who are fooled by scammers.

• Gov. Greg Abbott's office is about to get a major staffing shake-up.

• The city of Houston wants the U.S. Supreme Court to review a ruling that said the landmark decision legalizing same-sex marriage does not fully address the right to marriage benefits.

• A group of Dreamers shouted down House Minority Leader Nancy Pelosi during a news conference on Monday. Also, U.S. Rep. Jodey Arrington said DACA is not right during a town hall in Abilene. (Bloomberg and Abilene Reporter-News)

• A city council member in Bellmead says his Facebook was hacked after racist things were posted to it. (Waco Tribune-Herald)

• Dallas ISD was initially going to research 20 campuses whose names had Confederate or slavery ties. Now they're just focusing on four schools. (The Dallas Morning News $)

• A city staffer in Austin used public resources to sell beauty products while on the clock. (The Austin American-Statesman $)

• Here's an exhaustive look at the GOP's latest bill to repeal Obamacare — plus comparisons to the bill that failed to pass in July. (The Washington Post $) 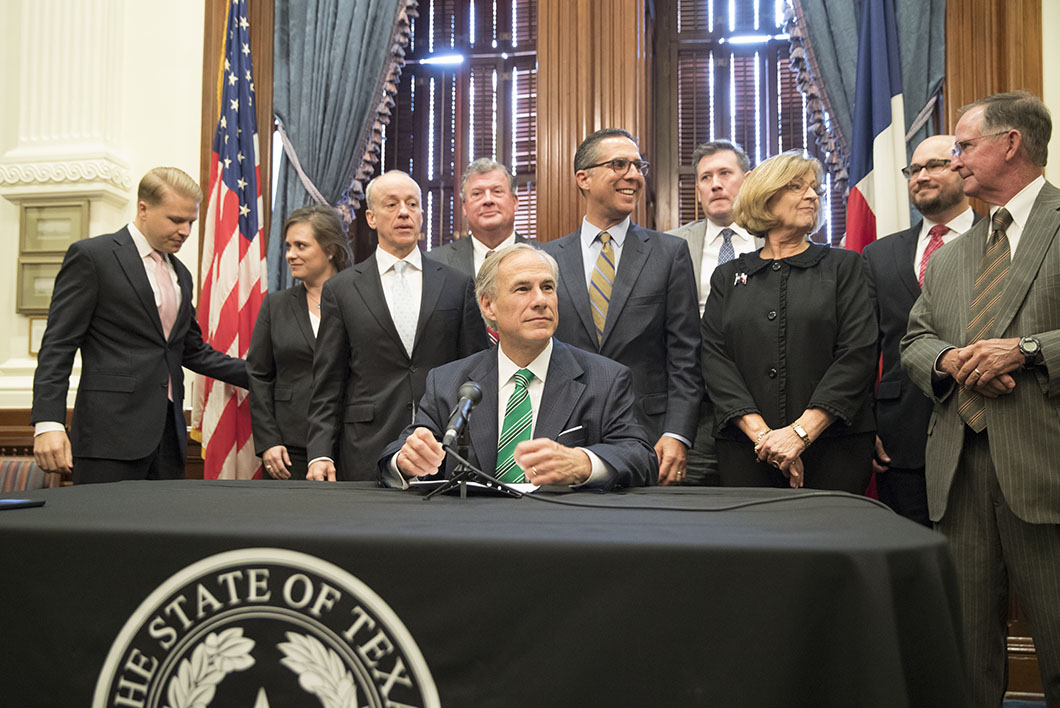 "When we asked her why she did that, she said, 'Well that’s what you do when you’re in love."

— Julie Krawczyk, director of the nonprofit Elder Financial Safety Center, on why a Dallas-area elderly woman said she fell victim to a scammer.