Travis County prosecutors are holding back — for now — on pursuing felony corruption charges against state Rep. Dawnna Dukes. Here's what you need to know:

• New information came to light, Travis County District Attorney Margaret Moore told the Austin American-Statesman on Thursday, having to do with Duke's 13 counts of tampering with a governmental record. Those were based on allegations that Dukes made false entries on travel vouchers to obtain money for expenses she was not entitled to. Moore said the fresh information on those vouchers "has created a need for further investigation by this office and the Texas Rangers."

• Let's recap: This all started back in February 2016, when The Texas Tribune found that the State Auditor's Office was investigating Dukes over whether she improperly required her legislative staffers to spend time working for a nonprofit group she founded. Then came personal accounts from a former babysitter who said she ran Dukes' personal errands and emails that showed the lawmaker directed state staff to work on a festival. In November 2016, Dukes easily won re-election to the Texas House — despite the ethics questions at hand — and in January of this year, a grand jury indicted her on office-of-abuse charges.

• Fast forward to this summer, when Dukes pleaded not guilty to those charges. Prosecutors told Dukes they would drop the charges if she resigned from office, paid $3,500 in fines and agreed to a drug and alcohol assessment, but they dropped their offer after she didn't respond by their deadline.

• What's next? Dukes is still facing two misdemeanor charges of abuse of official capacity, and prosecutors said Thursday that they are ready to go to trial on those in October, as scheduled.

• From Ross Ramsey: Forget about new political maps in Texas ahead of the 2018 elections. Well, probably.

• Texas school districts can now store leftover food on campus and distribute it later instead of throw it away.

• What will President Donald Trump — and Congress — decide to do with DACA?

• The next legislative session is in 2019, and House Speaker Joe Straus has ordered research on Harvey-related policy issues to happen before then.

• Dallas County GOP chairman Phillip Huffines talked about his twin brother, the border and the "bathroom bill" on Thursday as the race for Texas Senate District 8 gets underway.

The Texas Tribune Festival is almost here. Join us next Friday, Sept. 22 at the University of Texas at Austin. There is still time to register, or volunteer and attend for free.

• A doctor in Fort Worth got more than 16 years in prison after he fraudulently billed the federal government more than $50 million. (Fort Worth Star Telegram)

• The city of Killeen spent more money than it made for a decade, according to a new audit. (Killeen Daily Herald)

• Gov. Greg Abbott is meeting with a state lawmaker who wants Confederate monuments on Capitol grounds altered or removed. And up in Dallas, a Confederate statue was removed after delays last week. (Dallas Morning News $)

• The EPA doesn't want to release benzene levels collected post-Harvey. But a private firm has found that those levels of dangerous chemicals are now higher than normal.

• And now the question becomes: Will Hurricane Irma pull federal resources away from Harvey aid?

• Sewage plants on the west side of Houston have been fixed — which means residents there can flush and shower again. Also, the former president of Shell is the new point man on everything Harvey recovery-related in Houston. (The Houston Chronicle $) 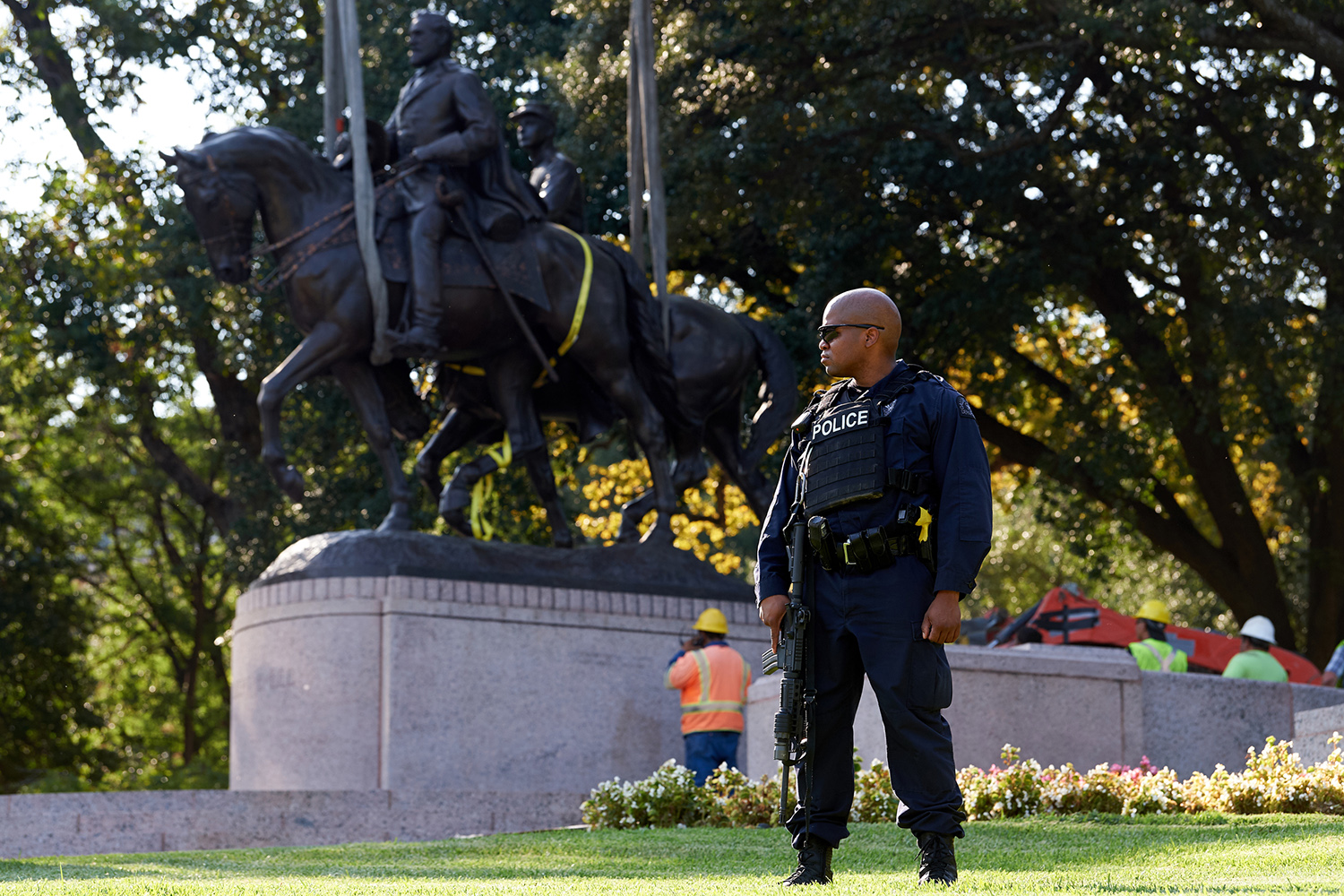 An officer looks on while workers remove a statue of Robert E. Lee from a public park in Dallas on Thursday, Sept. 14, 2017. Photo by Cooper Neill for The Texas Tribune. See more photos on our Instagram account.

"The law is only as good as the support that’s behind it."

— State Rep. Celia Israel, D-Austin, on legislation she proposed to allow Texans to register to vote online. It failed to pass the Texas Legislature.