Where did Texas universities fall on this year's U.S. News and World Report's college ranking list? Here's what you need to know:

• Rice University is by far the best-ranked school in Texas, and the University of Texas at Austin sits in the state's No. 2 slot. On the national stage, Rice is ranked the 14th-best school in the country — and UT-Austin, ranked 56th, edged out Southern Methodist University at 61st. Texas A&M University is fourth in the state this year, bypassing Baylor University, which dropped four spots this year to 75th in the U.S. overall. Some warn the U.S. News rankings should be taken with a grain of salt, but the rankings still carry a lot of weight, even if it's only from a marketing standpoint.

• Since we're talking about higher education, let's not fail to mention Hurricane Harvey's impact on universities in Southeast Texas. At the University of Houston, classes were canceled for a week, and when school finally re-opened, the 45,000 students plus faculty began their semester already facing a wide swath of challenges related to the storm. Rice University — home to around 6,000 students — was "spared" by the storm, as the campus put it on Sept. 5. All things considered, most campuses in the region saw delayed start dates and minor damage.

• And now, a belated introduction... Our "Now on the Books" series was originally set to kick off Sept. 1, when more than 650 new state laws went into effect. But then Harvey happened — and everyone's priorities shifted. We're ready to kick off a month-long series outlining several new measures the Texas Legislature passed this year, and how they may affect you. Dive into today's feature, which is about a law expanding knife owners' freedom to carry one almost anywhere in Texas, and revisit Monday's story here.

• State Rep. Larry Phillips, R-Sherman, isn't running for re-election. There are now six open seats in the Texas House ahead of the 2018 elections.

• U.S. Sen. John Cornyn wants the former White House chief strategist to target Democrats instead of incumbent Republicans ahead of the 2018 elections. (The Washington Examiner)

• A Confederate statue in Amarillo was vandalized over the weekend. (Amarillo Globe-News)

• Donald Trump, Jr. is speaking at a private business conference in Fort Worth today. Hillary Clinton is coming to Austin in November for a book signing. (Fort Worth Star-Telegram and The Austin American-Statesman $)

• Texas GOP leaders appear to have their eyes on a long-delayed reservoir project that experts say would have saved thousands of Houston homes from flooding.

• Fifteen women affected by Harvey are set to receive abortions at no cost.

• All but two refineries in Southeast Texas have restarted or are beginning the process of doing so. (Beaumont Enterprise)

• Mexico said it's dropping Harvey aid to Texas because it has its own natural disasters to worry about. (The Dallas Morning News $)

• Students in Houston ISD returned to school on Monday — but the school district's future still hangs in balance. (The Houston Chronicle $) 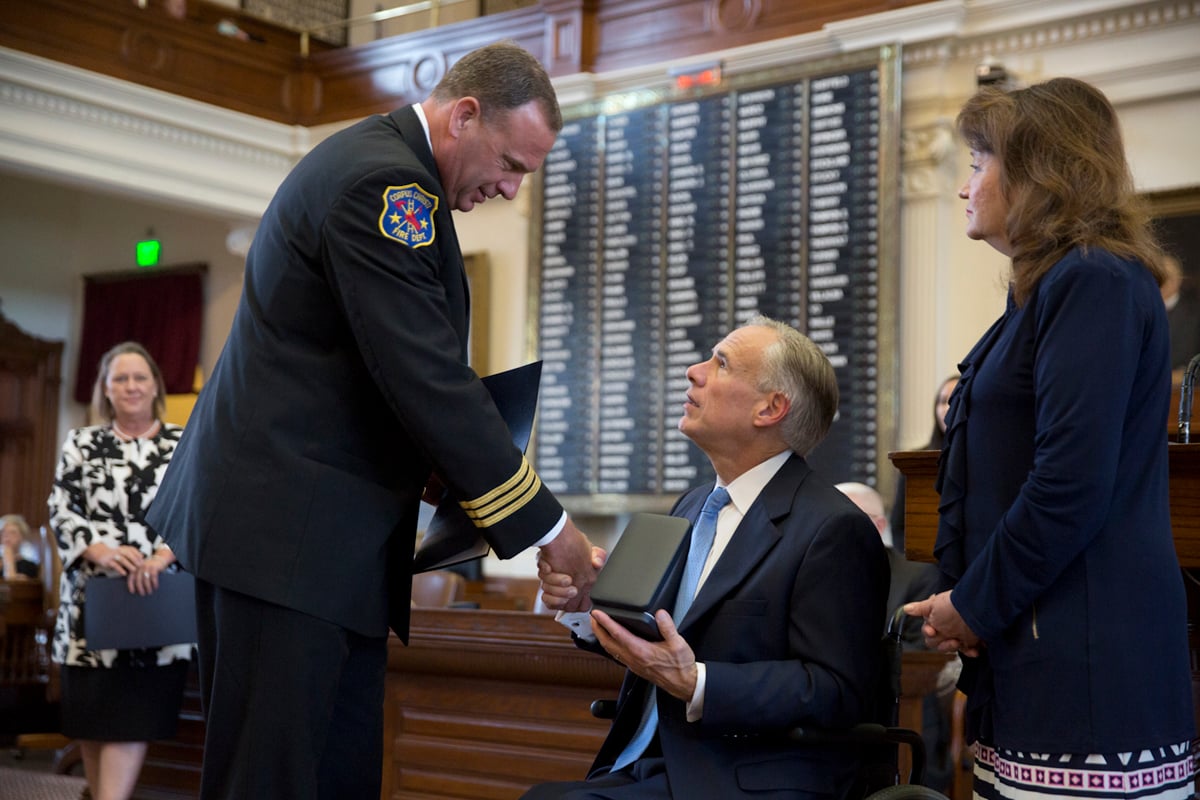 Gov. Greg Abbott presents the 2017 Star of Texas awards to family members of men and women who have been killed or injured in the line of duty, on Sept. 11, 2017. Photo by Marjorie Kamys Cotera. See more photos on our Instagram account.

"They have no choice. If they don’t do that, we’re going to get another one of these, you know, maybe not in five years but ... within the next decade."