It's been 16 years since Sept. 11, 2001 — the fateful day terrorists flew commercial airplanes into the World Trade Center and the Pentagon. Nearly 3,000 people died, and what happened that day altered the nation forever. Here's what you need to know:

• Texans now in Congress were scattered across D.C. — in the Pentagon, the U.S. Capitol and the White House. U.S. Rep. Jodey Arrington, R-Lubbock, a young White House staffer at the time, was in the building that day, interviewing appointees for positions in the federal government. "People were running down the hallways screaming," he said, "and literally women were taking off their heels and running." Democratic U.S. Reps. Sheila Jackson Lee of Houston and Eddie Bernice Johnson of Dallas were at the U.S. Capitol in a meeting, when someone ran in and said, "'We don't know what's happening. Get out!'" Jackson Lee said all they could see were "people running" and "shoes off their feet." State Sen. Brian Birdwell, R-Granbury, a lieutenant colonel in the U.S. Army, was in the Pentagon that morning — and he was only yards away from where the plane crashed.

• Spend time this morning revisiting The Atlantic's montage marking the 15-year anniversary of 9/11. People from all around the world re-opened wounds and shared their stories from that day. Juleyka Lantigua-Williams, a journalist who was in Times Square at the time, remembers it all being "so surreal and unbelievable" as people quietly watched CNN show footage of a plane hitting one of the towers. "I hope you never have to experience anything like that," she wrote to her goddaughter in 2006. Once you're finished with that, read this gripping piece from The Washington Post, which retraces Birdwell's reunion last year with the man who "held his leaky IV line and tried to keep him conscious as he lay on a gurney, parts of his body and half his face burned beyond recognition."

• This is President Donald Trump's first commemoration of 9/11 as commander-in-chief — and it's all happening just as one coast is recovering from Hurricane Harvey and another is enduring Hurricane Irma. Per the White House, the president and First Lady Melania Trump are set to observe a moment of silence this morning around the same time the first airplane struck one of the Twin Towers. Trump is also scheduled to attend an observance at the Pentagon.

• Thanks to a new state law, all newly purchased school buses must have seat belts.

• The U.S. House sent a $15 billion Harvey aid package to President Trump, which he has already approved. Four of Texas' 36 members voted against it — and none of them represent counties that were directly hit by the storm.

• The city of El Cenizo — a small Texas border town — is defying a crackdown on immigration. (Texas Monthly)

• Harvey has stirred up old anxieties at La Marque schools.

• Add this one to the list: the extent of water contamination is also still largely unknown.

• A law firm says the San Jacinto River Authority released water from Lake Conroe that flooded thousands of homes and businesses — ones that had escaped damage from Harvey's rainstorms. (The Courier of Montgomery County)

• Harvey has required a relentless response from Gov. Greg Abbott — one that often begins before sunrise and ends in the wee hours of the morning. (The Dallas Morning News $) 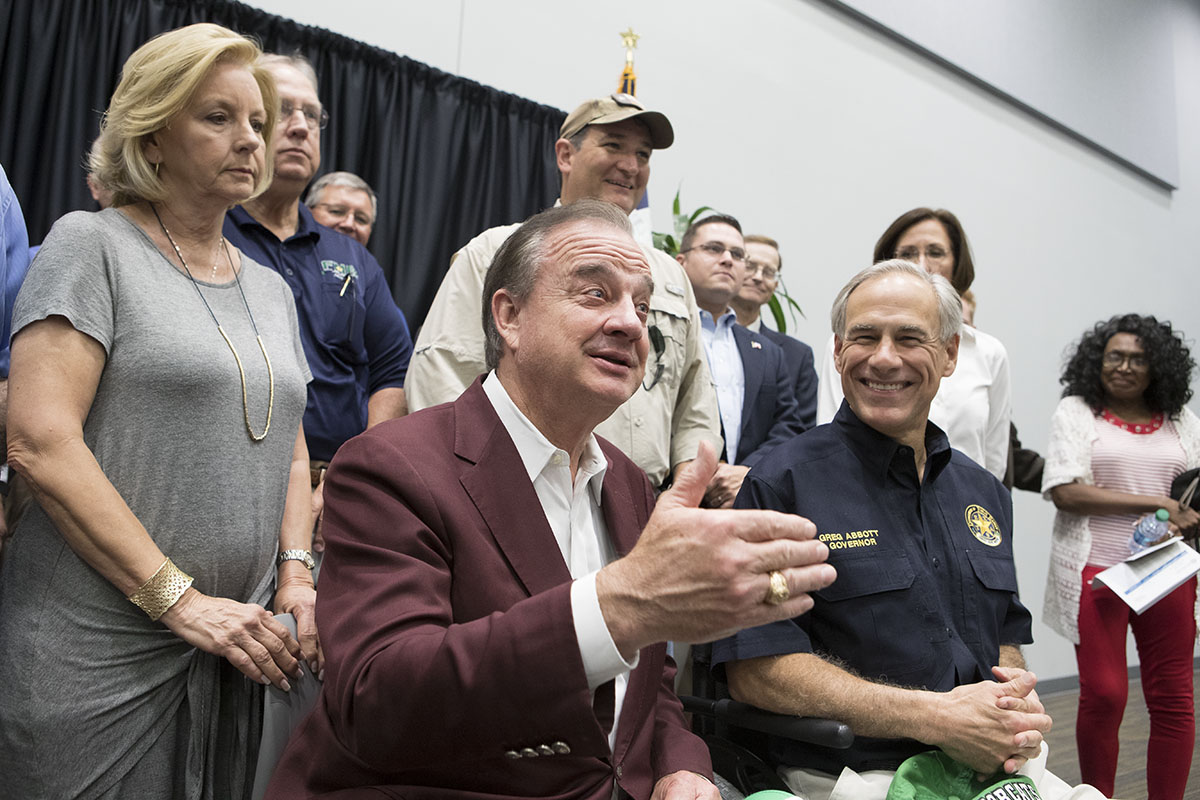 "I was wondering how long this relocation is going to last."

— Nicole Gardner, who has children enrolled in Texas City ISD schools that have been closed temporarily due to damage from Harvey.