• Sharp is the new Harvey czar — and he's set to chair the just-formed Governor's Commission to Rebuild Texas, a panel focused on rebuilding the state's infrastructure, per Abbott's office. Sharp's experience is long and wide; he's been at A&M since 2011, and before that, he served as a Democrat in both the Texas House and Senate, as a railroad commissioner and as the comptroller of public accounts. Sharp's not expected to leave his post at A&M for his new leadership role.

• This is round two of sorts for Sharp, who in 2006 was tapped by then-Gov. Rick Perry to lead the Texas Tax Reform Commission — a panel of 24 Texans who developed plans to overhaul the state's tax system and to ensure public schools received proper funding. The Wall Street Journal, which first reported Abbott's appointment, said the move represented a bipartisan gesture for the Republican governor.

• Abbott's set to make an announcement on the new commission and Sharp's chairmanship in a news conference at the Capitol this morning. Follow Texas Tribune reporter Patrick Svitek for updates. Before that though, read this Texas Monthly profile on Sharp from July, and this Tribune piece from 2013 on how his political acumen was charting a smooth course for big changes at A&M. Then read this one — on Perry and Sharp's fun times as students at A&M — just for kicks.

• One more thing: Recovery means money — and a fat slab of that will come from D.C. In short, President Donald Trump on Wednesday sided with congressional Democrats in a deal tying Harvey relief funding to raising the debt ceiling and one other fiscal measure. Earlier in the day, the U.S. House passed a nearly $8 billion short-term aid package for Harvey relief. That measure now heads to the Senate, where U.S. Sen. John Cornyn, R-Texas, has said he'd back coupling Harvey aid and a clean debt ceiling hike into one bill.

• A House committee is holding a hearing this afternoon at the Capitol to discuss the state's response to housing needs created by Harvey. Follow Brandon Formby for updates.

• Hunting feral hogs and coyotes from hot air balloons may now be legal, but it's not exactly easy to find someone offering the activity.

• Angela Paxton, wife to Attorney General Ken Paxton, is officially running for the Texas Senate in 2018.

Join us at 8 this morning for a conversation with three Tribune reporters who covered Hurricane Harvey. You can also watch the livestream here.

• Remember the long lines at gas stations and high gas prices last week? The Texas Railroad Commissioner says most of those stations in Texas will be refueled by Friday. (Laredo Morning Times)

• Texas has issued its first medical marijuana license — and two more are coming down the pipe. (The Austin American-Statesman $)

• The Dallas City Council voted Wednesday to immediately remove a Robert E. Lee statue. But then a federal court temporarily halted it. (The Dallas Morning News $)

• Hey, Harvey evacuees — we want to know how you're getting your kids back in school.

• Harvey brought exploding chemical plants and spikes in cancer-causing emissions. How much do you really know about potential dangers from the oil and chemical industries?

• Back in 2016, Harris County's flood control chief told us he saw "no looming issues."

• Nearly 8,000 Texans have taken refuge at state parks because of Harvey, including the Ding family. (KUT)

• Here's a closer look at Alonso Guillen, a DACA recipient who died saving the lives of flood victims from Harvey. (Texas Monthly)

• One of the many things Harvey highlighted: The role of immigrant labor in the state's economy. (Marfa Public Radio)

• The city of Houston is seriously looking at leasing a warehouse to house 300 storm evacuees for up to a year. (The Houston Chronicle $) 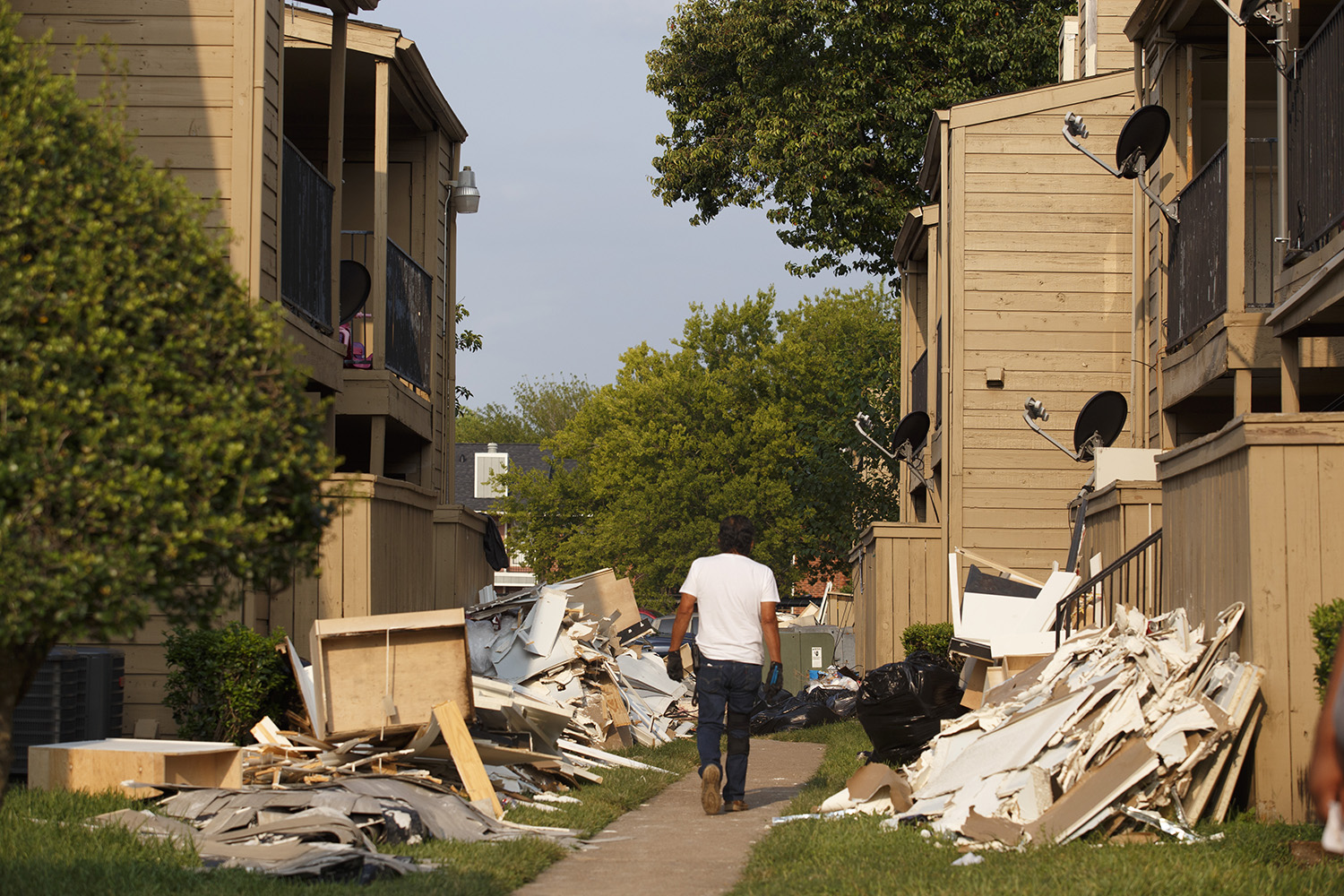 A clean up worker in an apartment complex near Greens Bayou in the Greenspoint area of Houston on Sept. 6, 2017. Photo by Michael Stravato. See more photos on our Instagram account.

"Could you stand in my shoes and tell my students, who have only known the U.S. as home, that they don't belong in this country?"

— Plácido Gómez, a teacher in the Rio Grande Valley, on how she discusses DACA with her students.

Disclosure: Texas A&M University has been a financial supporter of The Texas Tribune. A complete list of Tribune donors and sponsors is available here.