The Deferred Action for Childhood Arrivals' days appear numbered, but the fight over what that exactly means for the more than 800,000 recipients of the program — including more than 120,000 Texans — is still on the horizon. Here's what you need to know:

•On Tuesday, U.S. Attorney General Jeff Sessions announced the Trump administration was phasing out DACA over the next six months. The program, which started under former President Barack Obama in 2012, applies to undocumented immigrants who came to the U.S. before they were 16 years old and were 30 or younger as of June 2012. But in June, Texas Attorney General Ken Paxton led a coalition of states in laying down an ultimatum to the U.S. Justice Department: end the program or we'll expand our 2014 lawsuit to include a legal challenge to DACA. Following Tuesday's announcement, Paxton said he had dismissed the lawsuit.

• The reaction to the news was widely varied, even among Republicans. Texas Gov. Greg Abbott told reporters in Austin that the issue was one Congress — not the president — should take up. He declined to offer specific guidance for how DACA recipients in the state should prepare. U.S. Rep. Will Hurd — a Republican representing the state's most competitive congressional district — in a statement called for Congress to make a "permanent, legislative solution." Mayors from Austin and Houston — both Democrats — made clear their opposition to the Trump administration's decision. Notably absent from weighing in was U.S. Sen. Ted Cruz, R-Texas, who was critical of Obama's executive action on immigration in 2013.

• But then the president tweeted again. Hours later, President Trump muddied the waters, tweeting that he would "revisit" the DACA issue again if Congress isn't able to address it in the next six months.

• Keep an eye on Capitol Hill in the coming months, where the clock is ticking for lawmakers to hash out details on items such as raising the debt limit and extending government spending to avoid a federal shutdown. The GOP's expanding to-do list now includes Harvey aid and immigration reform — and it may not mesh well with the series of other deadlines they face. As for Dreamer legislation, Senate Majority Whip John Cornyn, R-Texas, told POLITICO Tuesday "there's no way" lawmakers would take it up this month, adding he didn't think "it will stand alone."

• In other immigration news... Paxton wants an appeals court to halt last week's ruling that temporarily blocked major parts of the state's "sanctuary cities" law from going into effect — and he wants a decision in two days. Paxton's appeal is with the Fifth Circuit Court of Appeals in New Orleans, and he's asked the appellate court to keep it on hold while that process plays out. In a statement Tuesday, Paxton called the sanctuary cities law "wholly valid," and added Texas "has every right to prohibit its own localities from having sanctuary city policies."

• Texas will be able to use its revised voter ID law for the upcoming November elections.

• Texas Agriculture Commissioner Sid Miller's back in the news, this time over a new state audit that says his agency dramatically raised fees on farmers, ranchers and lawmakers on a wide range of services.

Join us on Thursday for a conversation with three Tribune reporters who covered Hurricane Harvey.

Is Capitol Hill clueless over a DACA fix? (Politico)

El Paso ISD is paying a consultant $1,500 a day — and he just so happened to help arrange meetings between the district's superintendent and a company that won a bid to lead the district's $669 million bond program. (El Paso Times)

Another day, another settlement reached in a Title IX lawsuit against Baylor University. (Waco Tribune-Herald)

• All 36 Texans in the U.S. House will hold a rare, bipartisan meeting to discuss Congress' role in Hurricane Harvey's aftermath.

• Harvey delayed a week's worth of classes at the University of Houston, which re-opened Tuesday with a student body facing a wide swath of challenges related to the storm.

• Watch out for alligators, skunks and other wildlife as Harvey clean up efforts continue.

• "We lost everything we worked for," say residents in Northwest Forest. (Beaumont Enterprise)

• Lawmakers in D.C. are back — and tackling Harvey aid is at the top of their list. (Associated Press)

• In other Harvey aftermath news, President Trump canceled his Dallas fundraiser that was scheduled for Sept. 27. (The Dallas Morning News $) 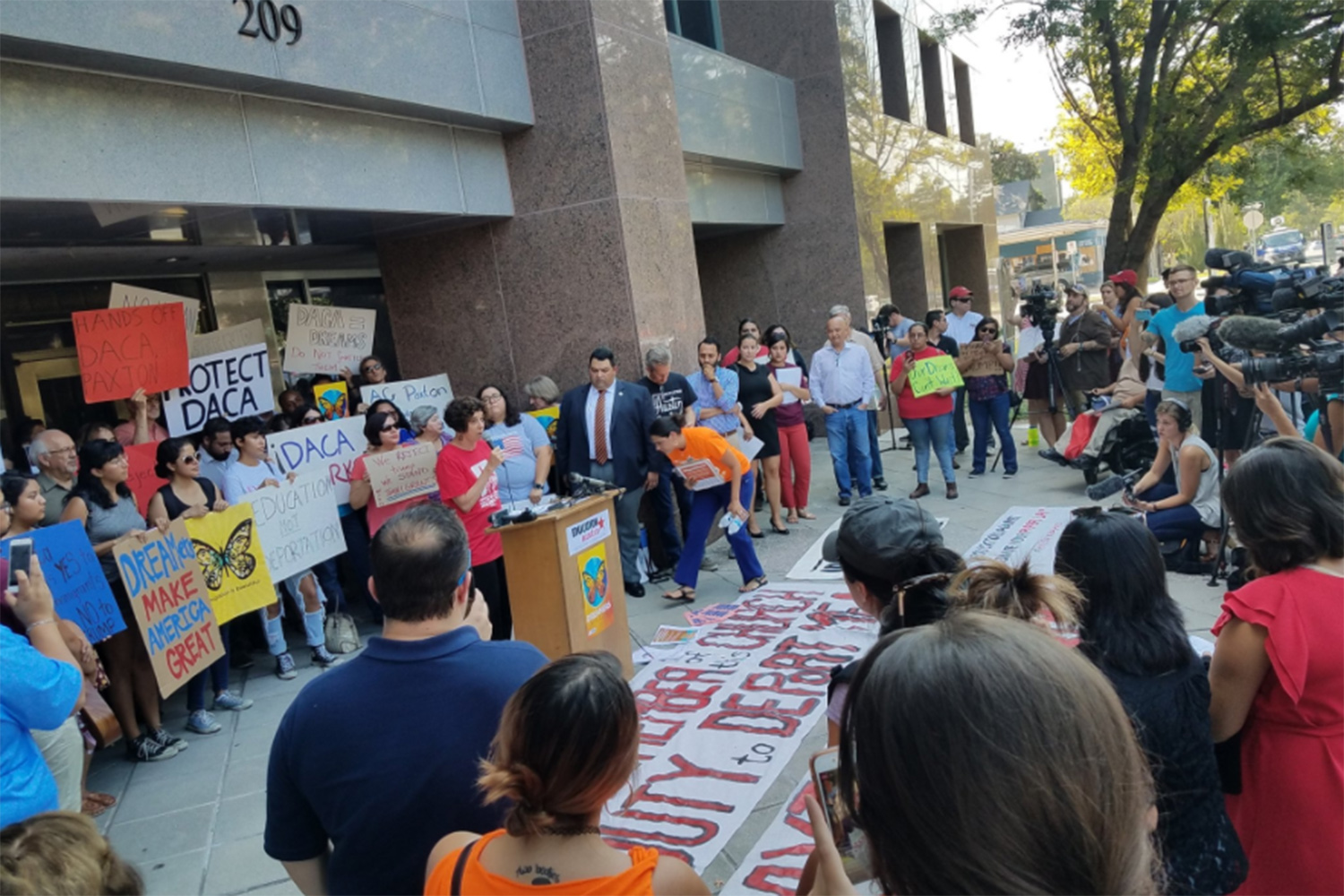 DACA supporters held a press conference in front of the Texas Attorney General's Office in Austin on Tuesday, Sept. 5, 2017, after the Trump administration announced the program was ending. Photo by Julián Aguilar. See more photos on our Instagram account.

"It will be a total Hail Mary."

— Jackie Watson, an Austin-based immigration attorney, on the possibility — and uphill battle — of taking legal action should DACA get axed.