The conversation swirling around President Donald Trump's comments on white nationalists and whether Confederate statues should be torn down doesn't appear to be going away in Texas — or around the nation — anytime soon. Here's what you need to know:

• A quick recap of what the president's said this week: After being criticized from Republicans and Democrats for the way he reacted to news out of Charlottesville, Virginia, President Donald Trump said at a news conference Tuesday there was "blame on both sides." He denounced white nationalists — who on Saturday led a protest over the removal of Confederate statues that left several injured and one dead — but also the "alt-left" for being violent, too. "This week it's Robert E. Lee. I noticed that Stonewall Jackson is coming down," Trump said. "I wonder, is it George Washington next week and is it Thomas Jefferson the week after?"

• The Charlottesville rally — and Trump's response — have renewed the argument in Texas over Confederate statues. The Austin City Council has approved a process to rename Robert E. Lee Road. Houston's mayor announced he asked the city to look into whether Confederate monuments in public areas should be removed. The mayor of Dallas wants a task force to evaluate taking down Confederacy-related statues around town. A San Antonio City Council member is pushing a measure to remove a statue in one of the city's parks.

• What do your representatives think? We asked all 38 Texans in Congress if they thought the president's reaction to white nationalist-fueled violence had encouraged the movement — and we reported their responses here. Several members said they were bothered by it, Democrats said they were outraged and many more decided to not weigh in at all. U.S. Sen. Ted Cruz called the violent protest in Charlottesville "tragic" and "ugly" and said "the Klan, the Nazis, the white supremacists ... they're racists, they're thugs, they're bigots and they're advocating evil." U.S. Rep. Beto O'Rourke said Trump's comments made "him unfit for office." U.S. Sen. John Cornyn and U.S. Rep. Michael McCaul, along with several others, didn't respond to a request for comment.

• Gov. Greg Abbott thinks removing Confederate monuments "won't erase our nation's past" and "doesn't advance our nation's future." In a statement Wednesday, the governor said, "Racist and hate-filled violence — in any form — is never acceptable, and as Governor I have acted to quell it. ... But we must remember that our history isn't perfect. Instead of trying to bury our past, we must learn from it and ensure it doesn't happen again." The state's other top two leaders — Lt. Gov. Dan Patrick and House Speaker Joe Straus, both Republicans — haven't weighed in, yet.

• Texas has the second highest number of Confederate statues, according to the Southern Poverty Law Center, just behind Virginia's 223 monuments. Be mindful of its 2012 publication date, but we have an interactive map on our site of memorials on Texas Capitol grounds that mention the Confederacy. Speaking of, a state lawmaker wants one of those plaques outside his office — and all the rest of them — removed from the state building.

• Power Trips: This is the third story in The Texas Tribune's series exploring the fight between state and local officials over regulatory power. We tackled ride-hailing first, and then bathroom regulations. Now, we're exploring property taxes. Which local control issue should we explore next? Tell us here.

• In which Ross Ramsey asks: Is it really a good idea to make a majority of a minority, as some Republicans in the Texas House hope to do?

• President Trump's coming to Dallas in September to fundraise.

• Gov. Greg Abbott put his pen to use on Wednesday, signing a bill to extend the state's maternal mortality task force and another to regulate local tree ordinances.

• The special session dust is settling — and the spotlight is on the Texas Speaker of the House.

• After months of controversy, protests and debate, the Texas "bathroom bill" is dead, for now.

• The House is mainly to blame for the special session's shortcomings, said Gov. Abbott, who also didn't rule out calling state lawmakers back for a third overtime round.

President Trump is ending the business advisory council that some CEOs were resigning from in response to his Charlottesville reaction. (Politico)

A federal court told Arkansas they can block Medicaid funding to Planned Parenthood, which is a 180 from what another federal judge told Texas in February. (AP News)

More drugs were found at the U.S.-Mexico border — this time, around $10 million in liquid meth. (San Antonio Express-News $)

The cities of Fort Worth and San Marcos aren't joining the legal challenge against the state's new "sanctuary cities" law. (Fort Worth Star Telegram and Austin American-Statesman $)

But the city of McAllen is. (The Monitor) 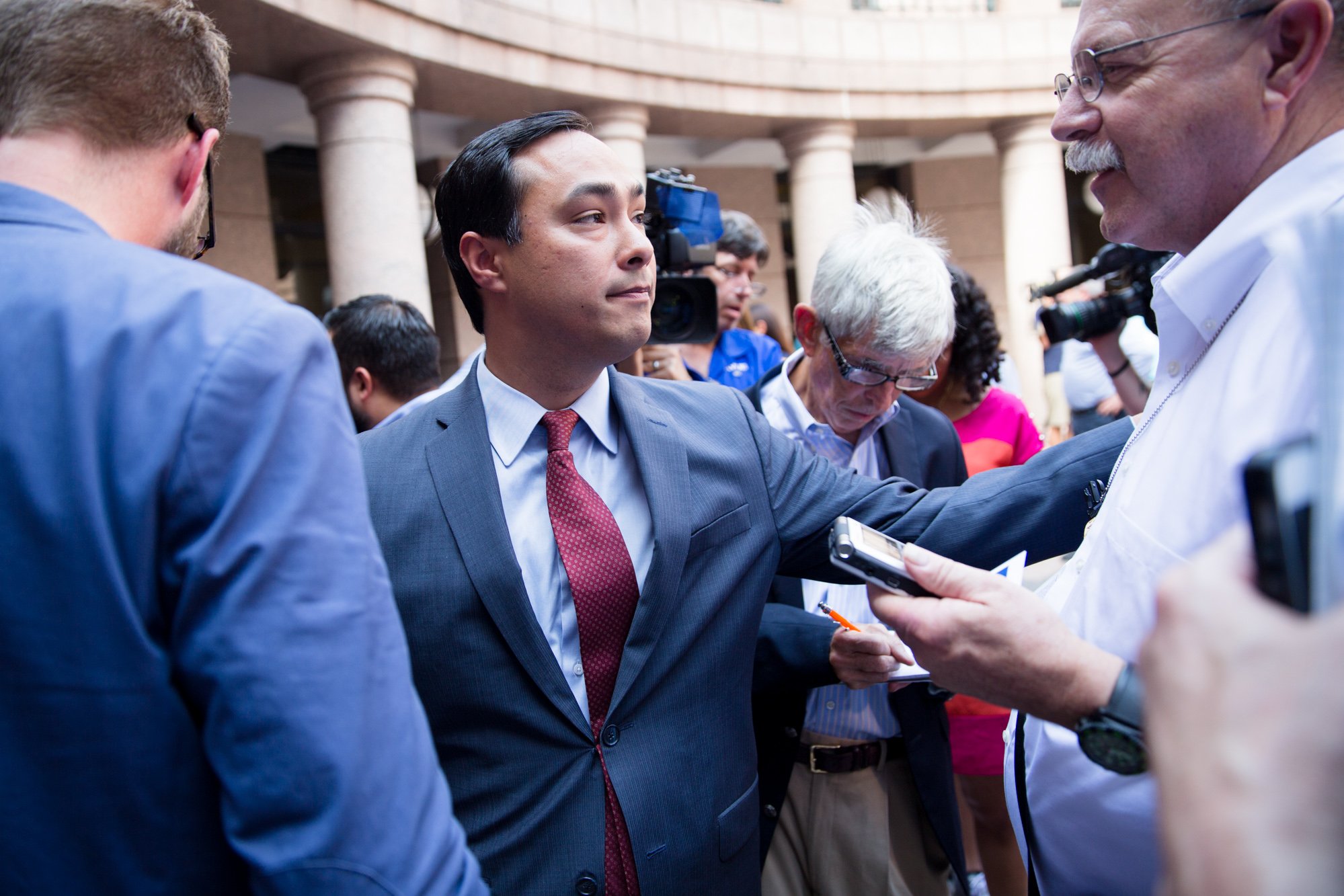 U.S. Rep. Joaquin Castro, D-San Antonio, talked to the press in the outdoor Capitol rotunda on Aug. 16, the day after the special session ended. Photo by Austin Price. See more photos on our Instagram account.

"The jury's out, and we'll see what Republicans decide."