There are more than a dozen monuments, markers and statues on the Capitol grounds that overtly reference the Confederacy in one way or another, according to the State Preservation Board.

Below, we provide an interactive guide to those memorials with photos and writings that accompany each memorial. 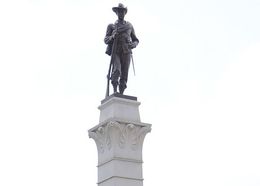 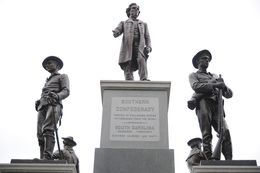 Died for States' Rights Guaranteed Under the Constitution. The people of the South, animated by the spirit of 1776, to preserve their rights, withdrew from the federal government in 1861. The North resorted to coercion. The South, against overwhelming numbers and resources, fought until exhaustion. During the war, there were twenty two hundred and fifty seven engagements. In eighteen hundred and eighty two of these, at least one regiment took part. Number of Men Enlisted: Confederate Armies, 600,000 : Federal Armies, 2,859,132. Losses From All Causes: Confederate, 437,000 : Federal, 485,216. 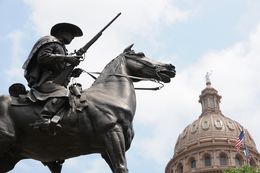 Side One In Commemoration of the Valor of the Eighth Texas Calvary, Better Known as Terry's Texas Rangers. Provisional Army of the Confederate United States. 1861-1865. Erected 1907 by Surviving Comrades.

Side Two "There is no danger of a surprise when the rangers are between us and the enemy." -General Braxton Bragg "The Terry Rangers have done all that could be expected or requested of soldiers." -Jefferson Davis

Side Three Last Order: Headquarters Cavalry Corps April 24, 1865 Gallant Comrades: You have fought your fight. Your task is done. The bones of your comrades mark the battlefields of Kentucky, Tennessee, North Carolina, South Carolina, Georgia, Alabama, and Mississippi. You have done all that human exertions could accomplish. In bidding you adieu I desire to tender my thanks for your gallantry in battle, your fortitude under suffering, and your devotion at all times to the holy cause you have done so much to maintain. I desire also to express my gratitude for the kind feeling you have seen fit to extend to myself and to invoke upon you the blessings of our Heavenly Father in the cause of freedom. Comrades in arms, I bid you farewell. --Joseph Wheeler, Lieut. Gen. Commander Calvary Corps, Army of Tennessee

Side Four "With a little more drill, you are the equals of the Old Guard of Napoleon." -Gen. Albert Sidney Johnston "I always feel safe when the rangers are in front." -Gen. Wm. J. Hardee 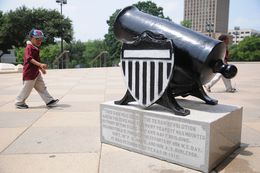 From the Texas Revolution and Civil War
Location: South Entrance 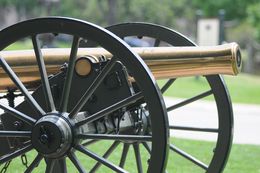 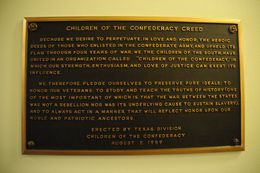 Children of the Confederacy Creed

Because we desire to perpetuate, in love and honor, the heroic deeds of those who enlisted in the Confederate Army, and upheld its flag through four years of war, we, the children of the South, have united in an organization called "Children of the Confederacy" in which our strength, enthusiasm, and love of justice can exert its influence. We, therefore, pledge ourselves to preserve purse ideals; to honor our veterans; to study and teach the truths of history (one of the most important of which is, that the war between the states was not a rebellion, nor was its underlying cause to sustain slavery), and to always act in a manner that will reflect honor upon our noble and patriotic ancestors.
-Erected by Texas Division, Children of the Confederacy, August 7, 1959 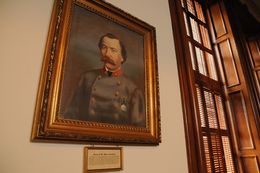 Born in Tuam, Galway County, Ireland, in 1838. Arrived in New Orleans in 1848 and later moved to Houston, Texas. Dowling volunteered for the Confederate Army early in the Civil War, became a First Lieutenant, and participated in the recapture of Galveston on January 1, 1863. On January 21, 1863, he was in command of Company F, Texas Heavy Artillery, and was ordered by General John B. Magruder to spike the guns at Fort Sabine. Dowling and his Davis Guards, instead of obeying orders, used rails of the Eastern Texas Railroad to strengthen Fort Sabine, repulsed the attacking Federal fleet, and won the battle of Sabine Pass, the most spectacular military engagement in Texas during the Civil War. Dowling died in Houston in 1867 and was buried in St. Vincent's cemetery. In May 1889, the Texas Legislature presented his daughter, Anne, a medal in her father's memory, and in 1936, the Texas Centennial Commission erected a monument to Dowling and his men at Sabine Pass. 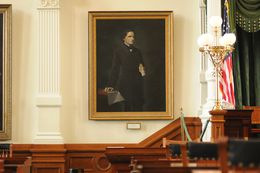 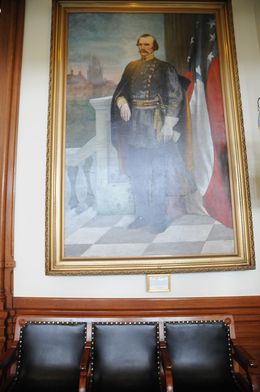 Photography by Allen Otto and additional reporting by Holly Heinrich.