• The chambers never managed to reach common ground on some issues. Abbott's ambitious 20-item agenda for the session included several measures that sailed through both chambers — most importantly, must-pass "sunset" legislation that extended the lives of several state agencies. But "bathroom" legislation to regulate which restrooms some transgender Texans can use never got a hearing in a House committee, and the two chambers were hard-pressed to strike a deal on two of Abbott's biggest priorities: property taxes and school finance.

• The House bit the bullet to end a school finance stalemate ... With just hours to go in the session Tuesday, the House voted to swallow a bitter pill — accepting changes to a school finance bill that stripped out $1.5 billion in funding from the measure. "To say I'm disappointed is an understatement," said House Education Committee Chairman Dan Huberty, R-Houston, before moving to concur with the changes the Senate made to the bill.

• ... And then called it a day without addressing property tax reform. The chambers had been expected to send representatives to iron out their differences on a bill that would have called for voter approval of property tax increases over a certain threshold. A key sticking point: whether that threshold would be a 6 percent tax increase (like the House wanted) or a 4 percent increase (like the Senate wanted). The House's adjournment meant that the Senate could either take the bill as the House sent it to them or call it a day without passing anything. They picked the latter option — something that by all appearances Abbott didn't seem to mind Tuesday night. "Our office believes this special session has produced a far better Texas than before," a spokesperson said after the chambers gaveled out.

• Lawmakers may be back in Austin sooner than you think — but for an entirely different reason. A federal court ruled Tuesday that two of Texas' 36 congressional districts are unconstitutional, and ordered that the political boundaries be redrawn ahead of the 2018 elections. Texas Attorney General Ken Paxton has three days to decide whether he wants state lawmakers to draw a new map — which would inevitably lead to another overtime round at the Capitol — or if he wants to punt the issue back to court. Regardless, two things still remain on the table: A new map could shake up multiple congressional races across the state, and the drawing of one could delay the next election cycle. (The issue surrounding Texas' political maps has been years in the making. Catch up here, here and here.)

• But for now, the Capitol is a bit quieter, and a slew of new laws are set to take effect soon. While legislation such as the "bathroom bill" and property tax reform are dead for now, don't forget about the stack of laws Abbott signed earlier this year that are going into effect Sept. 1. We'll have more soon on the new measures — and how they'll impact you — so stay tuned.

• The House Republican Caucus is meeting at 8:30 this morning to go over the procedure for nominating a speaker candidate. The meeting was requested by the Freedom Caucus, a group of conservatives in the lower chamber. Follow Texas Tribune reporters Patrick Svitek and Morgan Smith for updates.

• From Ross Ramsey: It's never the ending you expect.

• Texas A&M canceled a "White Lives Matter" rally. Are they allowed to do that? In any case, the white nationalist organizer says he might march through campus anyway.

• Good news, the Texas comptroller told state lawmakers, you have $196 million more to work with!

Amid the Confederate statues should go talk, President Trump asks, "Is George Washington next?" (The Hill)

More than 70 people signed up to speak on whether the city of Fort Worth should join the fight against the "sanctuary cities" law. (Fort Worth Star-Telegram)

The plaintiff who was raped by a former Baylor football player reached a settlement in the Title IX lawsuit she brought against the university. (Waco Tribune-Herald)

What's it really like to be an undocumented immigrant in East Texas? (The Tyler Loop) 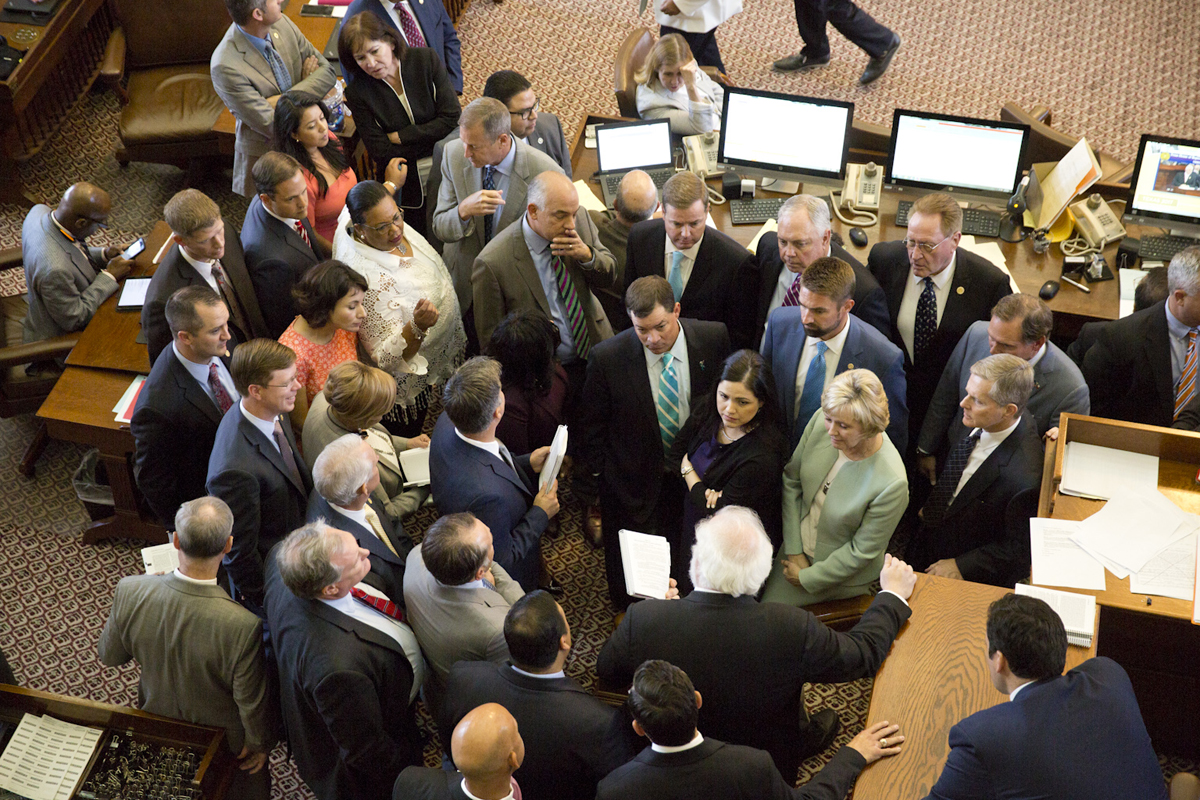 House members huddled near the dais in the lower chamber on Aug. 15. Photo by Marjorie Kamys Cotera. See more photos on our Instagram account.

— State Sen. Jane Nelson, R-Flower Mound, upon hearing the news that the House had adjourned.