A federal judge dismissed Texas Attorney General Ken Paxton's request to dub the state's new "sanctuary cities" ban constitutional on Wednesday — but the legal battle isn't over yet. Here's what you need to know:

• Back in May, after hours of debate and protest, state lawmakers passed Senate Bill 4 — a measure allowing local law enforcement to question detained or arrested people about their immigration status — and Gov. Greg Abbott signed it shortly after. Paxton, the state's top attorney, was looking to curb legal challenges to the high-profile law — so he filed a lawsuit within hours of the governor signing it, requesting a federal court declare the new measure constitutional.

• But opposing litigation was quick to follow — and the city of El Cenizo and Maverick County filed their own lawsuit soon after Paxton filed his. Dallas, San Antonio and Houston, among other local governments, joined the fight against the new law, arguing it was unconstitutional and discriminatory. Up until Wednesday, there were two separate cases on the "sanctuary cities" ban; U.S. District Judge Orlando Garcia in San Antonio heard oral arguments from both sides in the lawsuit against the state in June, and a couple days later, U.S. District Judge Sam Sparks in Austin listened to attorneys spar over the proper venue in Paxton's lawsuit.

• Immigration enforcement is up to the feds, Sparks said in his ruling Wednesday, adding he couldn't rule on something that hasn't gone into effect yet. While Paxton's lawsuit may be dismissed, the attorney general in a statement after the ruling said Sparks' decision didn't really have a bearing on the other case in San Antonio, and added he planned to continue defending the law in court there. "The health, welfare and safety of Texans is not negotiable," he said.

• So we're back to San Antonio, where a question mark hangs over the pending case there. Garcia has a little more than three weeks to make a decision before the law goes into effect on Sept. 1, and the parties at the center of that challenge want him to place the new law on hold as it winds its way through the legal system.

• The House is set to consider the Senate's "sunset" bills that would keep several state agencies afloat this morning at 9. The Senate is reconvening at 10 a.m.

• Gov. Greg Abbott signed a law legalizing cannabis oil more than two years ago. Texans may be able to start buying it in January.

• We've reported on state lawmakers' business ties with public entities and whether they constituted conflicts of interest. Now read about how one state lawmaker's links to utility districts have raised some ethical questions.

• The Texas House initially approved a measure cracking down on mail-in ballot fraud, but in doing so, they repealed another law Gov. Abbott already signed this year. 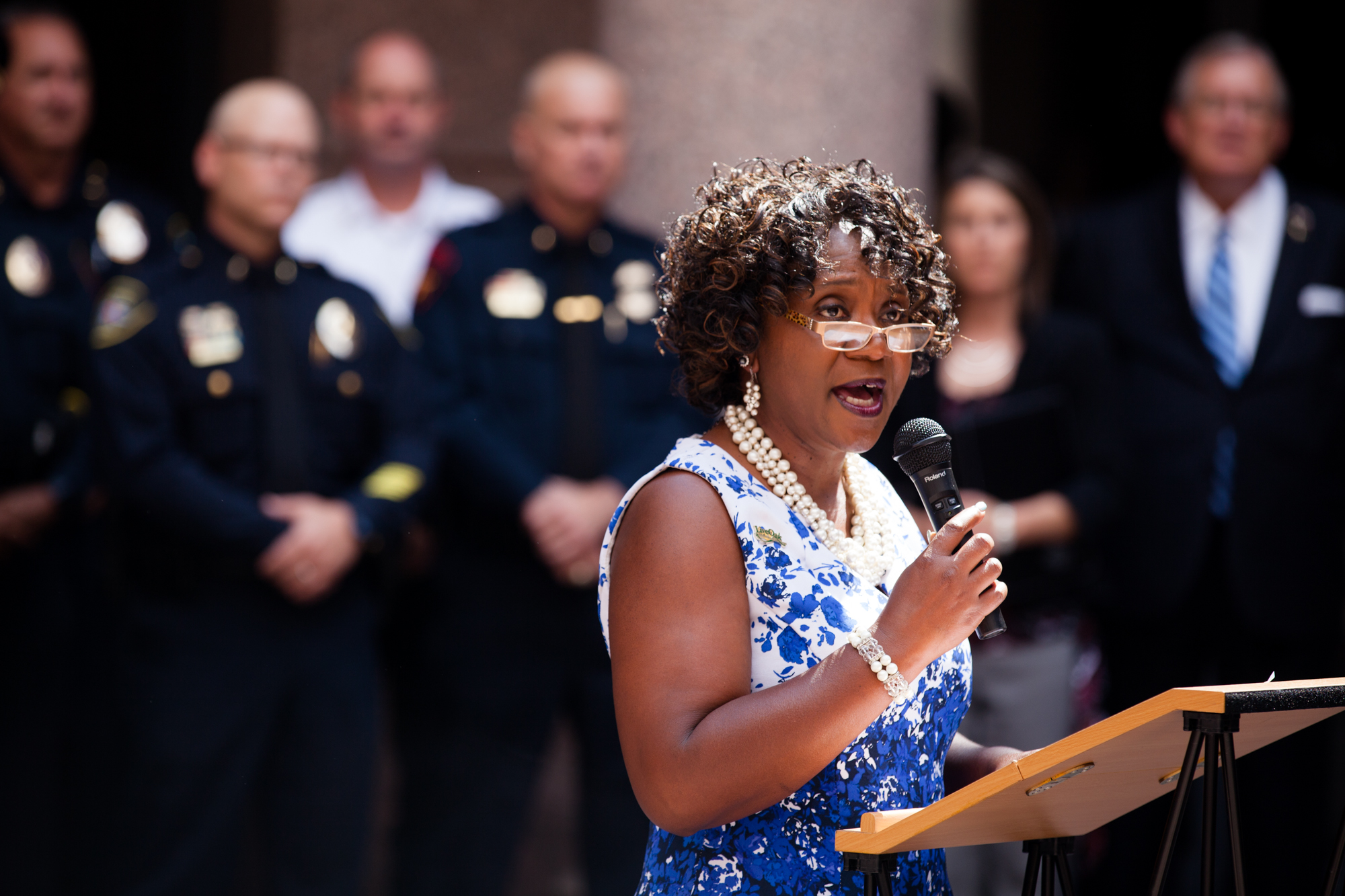 Live Oak Mayor Mary Dennis, president of the Texas Municipal League, spoke against the revenue cap imposed by Senate Bill 1, which limits local governments in providing services such as disaster response and law enforcement, at a press conference at the Capitol on Aug. 9. Photo by Austin Price. See more photos on our Instagram account.

"It’s funny. When people say, ‘What are you working on, what are you doing?’ I say, ‘I’m still trying to kill the Trinity toll road.’”

— Angela Hunt, on her 11-year fight to kill a divisive riverside toll road in North Texas.