The Senate ended their Wednesday with what Lt. Gov. Dan Patrick called a milestone — in one week, senators had passed most of Gov. Greg Abbott's special session items, and they only had to plow through several hours of debate and late nights to get the job done. But the 30-day clock is ticking, and both chambers at the Capitol still have more work to do. Here's what you need to know:

• Where the Senate's at: On Wednesday, the upper chamber put finishing touches on multiple bills, including one to restrict abortion insurance, another that would roll back cell phone usage ordinances, legislation to crack down on mail-in ballot fraud and municipal annexation reform. "No Senate in history has ever passed 18 bills in seven days," Patrick told senators as he stood at the dais, excluding the two pieces of sunset legislation the upper chamber approved to keep several key state agencies alive. But celebrations aside, a few remaining items still await action in the Senate, including a bill that would place a cap on local spending and another that would prevent local governments from enforcing ordinances on a property that weren't in place when that property was purchased. Don't forget the teacher pay raise proposal either, which was stripped from a bill on the Senate floor Tuesday night.

• On that note... City and county leaders this year have been frustrated with state officials and lawmakers for championing proposals to override local ordinances and instead create statewide rules — just take a look at the state's new ban on texting-while-driving or rules on ride-hailing companies such as Uber and Lyft. The local control theme has spilled over into the special session — and when Abbott announced he wanted lawmakers to pass measures regulating tree ordinances, spending caps and bathrooms, 18 Texas mayors requested a meeting with the governor to discuss. Abbott held his first of three meetings with them on Wednesday and is set to meet with more mayors today and next week. But there's a big question mark next to the mayors representing the state's five largest cities — and whether Abbott plans to grant their request to meet with them.

• Here's how the rest of the week is set to play out: The House will meet at 10 this morning, and they're expected to vote on its second sunset bill, one of the anti-abortion measures and tree-regulating legislation that happens to be the one less desired by Abbott. The Senate is off today, but they'll be back Friday at 10 a.m.

• It's a whirlwind keeping track of Abbott's 20-item special session agenda, but we have you covered — here's where the Texas Legislature is on all of the governor's issues. We'll constantly be updating it over the next few weeks as the special session carries on.

• Texas Attorney General Ken Paxton has a hearing in his securities fraud case in Houston today, where the date of his first trial could be announced. Follow Texas Tribune reporter Patrick Svitek for updates.

• Radio launched Lt. Gov. Patrick's political career, but now that he's mostly off the airwaves, the Houston station he owns continues to push his conservative agenda.

• Texas Agriculture Commissioner Sid Miller is clapping loudly for Trump's decision to ban transgender people from the military. Oh, and he's also wondering "why it took so damn long."

• Massive state funding cuts to the Texas higher education system never happened this year, but that doesn't mean public universities are out of the woods.

• Folks were arrested near the Texas Capitol for blocking traffic to protest the state's position on an Obama-era immigration program.

Join us on July 31 for coffee and a conversation on bathroom politics with state Sen. Sylvia Garcia, D-Houston, and state Rep. Ron Simmons, R-Carrollton at The Austin Club. 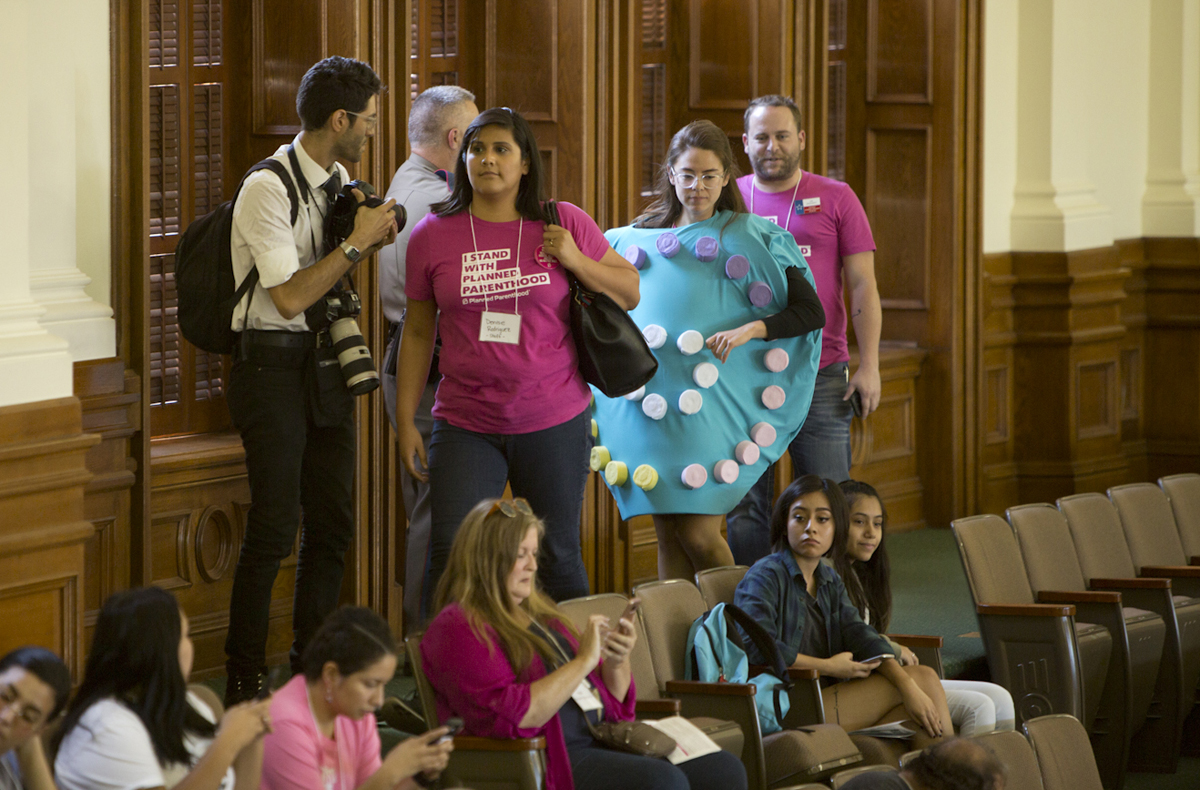 "I just wonder why it took so damn long. The United States Military is not the place for leftist social experimentation."