Texas Republicans in Congress dodged and ducked Tuesday when asked about the news that Donald Trump Jr., son of President Donald Trump, released emails showing he accepted a meeting with a Russian government lawyer to get dirt on Hillary Clinton during the presidential campaign in June 2016. Here's what you need to know:

• A quick table setter: On Tuesday morning, Trump Jr. tweeted out a statement and chain of emails between him and a Russian lawyer in the name of being "totally transparent." The emails made clear a senior Russian government official was offering documents and information "that would incriminate" Clinton. The New York Times — the first ones with the scoop — published its own copy of the correspondence shortly after.

• "When I go back to Texas, nobody asks about Russia," said U.S. Sen. Ted Cruz on Tuesday, adding he got "zero" questions on Russia from constituents during town halls he held across his home state. He also deflected questions about Trump's relationship with Russia, instead saying former President Obama's "appeasement" toward Russia was to blame. U.S. Sen. John Cornyn shifted most of his comments toward his focus on the Senate GOP's upcoming second stab at a health care reform bill, but suggested the younger Trump should testify before the Senate Intelligence Committee — a panel Cornyn sits on — in the future. The two senators weren't the only members of the Texas congressional delegation wary of weighing in on the news; House Republicans in general were reluctant to weigh in.

• Other reactions: "My son is a high-quality person, and I applaud his transparency," President Donald Trump said in a statement Tuesday through spokeswoman Sarah Huckabee Sanders. GOP strategist and CNN political analyst Ana Navarro delivered one of the more colorful takes, saying Trump Jr. "was dropped on his head as a child!" And Trump Jr. — who in emails last year said "I love it" about possibly receiving incriminating information on Clinton — told Fox News host Sean Hannity on Tuesday he would have "done things differently" in hindsight.

• Tuesday's news overshadowed a couple other big items brewing on Capitol Hill, such as the revised Senate GOP health care bill senators are prepping to unveil Thursday, or the fact Senate Majority Leader Mitch McConnell delayed the chamber's traditional five-week recess – announcing senators would keep working through the first part of August to tackle tax reform and numerous unfinished nominations, among other things the Trump White House wants before congressmen go on break.

Now, your take: In a UT/TT poll from June, 39 percent of Texas voters said the Trump campaign and Russia coordinated during the 2016 election, while 45 percent believed there was none. Another nugget from the poll showed that 81 percent of Republican voters in the state said Russia didn't influence last year's election, and 75 percent of Texas Democrats said Russia did. What do you think of the latest news on Donald Trump Jr. and Russia? Tweet us with #MyTexasTake.

• The University of Texas System Board of Regents are meeting today. Follow Texas Tribune reporter Matthew Watkins for updates.

• Today is day three of the expected week-long trial over Texas' political maps in San Antonio. A panel of three federal judges finished hearing arguments over the state's House map yesterday and started listening to testimony on the state's congressional map. Read our coverage here, here and here — and follow Texas Tribune reporter Jim Malewitz for updates out of San Antonio.

• A new executive director has been tapped to clean house at the embattled Texas Alcoholic Beverage Commission.

• From Ross Ramsey: Amid a legal trial on the Texas redistricting case, the mapmakers of the hour are the three federal judges hearing the litigation in San Antonio.

• A new study says buying electricity is getting cheaper in the state — but not for all Texans.

Despite push from Democrats, Harris County is staying out of the SB 4 lawsuit, Texas Observer

Trump supporters have a new anthem, and it came from Texas, The New York Times ($) 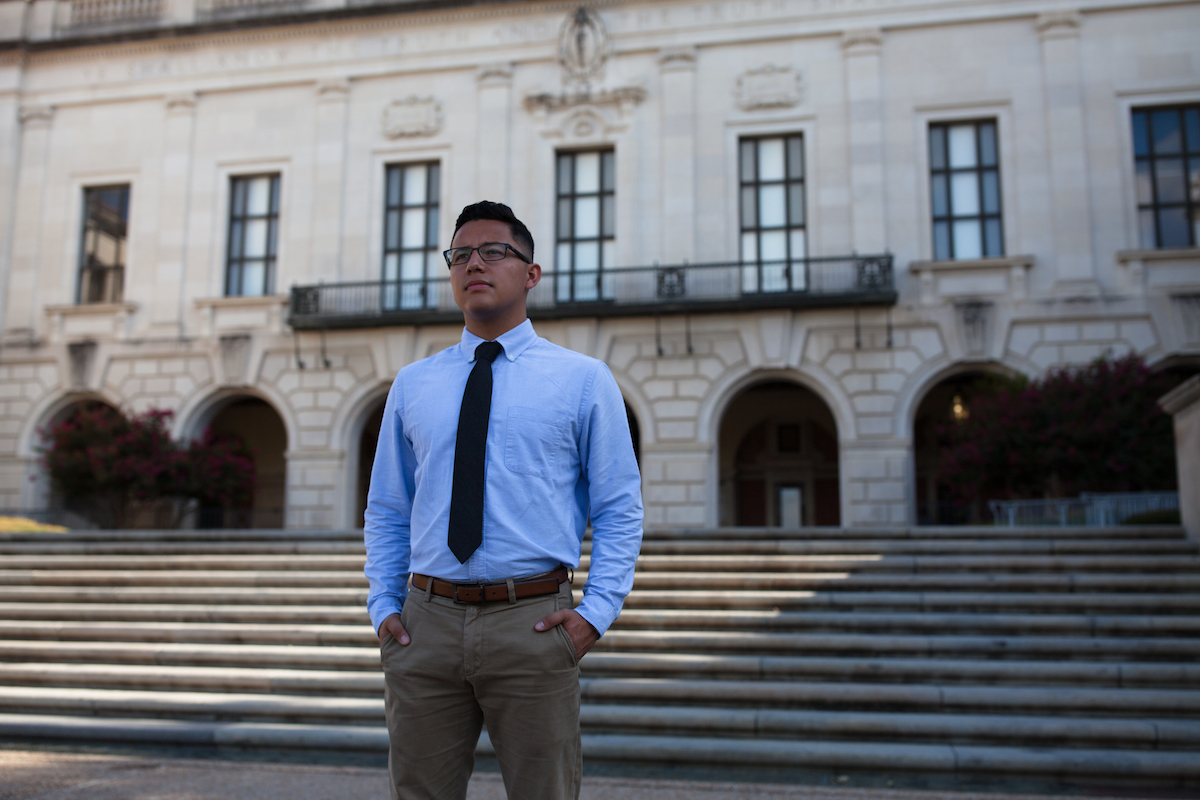 Sam Cervantes, a rising junior at UT-Austin, benefits from a state program allowing noncitizens and some undocumented immigrants to pay in-state tuition rates at public universities. Lawmakers during the regular legislative session attempted to repeal the program, but failed to do so. Listen to Cervantes explain why state lawmakers should not repeal in-state tuition for undocumented students. Photo by Austin Price. See more photos on our Instagram account.

"Despite hotly partisan rhetoric, if Texas legislators want to have the greatest chance of getting their bills into the law books, they should continue to look for partners across the aisle."

— Mark Hand, an LBJ school student at UT-Austin, and Jonathan Lewis with Thinktiv, on bipartisanship in the Texas Legislature.