Alas, the loooong holiday weekend is in the rearview. But there's lots of great reading to get you caught up on. Here's what you need to know:

• Worth your time #longreads: Lawrence Wright's opus on Texas' 85th regular session is filled with insightful nuggets and forecasts potentially rough waters as state lawmakers return to Austin for the special session in less than two weeks. In addition to taking readers on a trip down the Legislature's nutty memory lane, Wright wades into the "bathroom bill," one of more than a dozen items Gov. Greg Abbott wants the Legislature to pass during the 30-day special session. But not so fast — House Speaker Joe Straus, a critic of the proposal and leader of the lower chamber, signaled to Lawrence he wouldn't be forced by Lt. Gov. Dan Patrick to pass legislation that could leave "the suicide of a single Texan on my hands," adding, "We're under no obligation to pass anything."

• Who are "perverted little tarts?" They're female students who were suspected of drinking alcohol at parties, according to emails top Texas lobbyist Neal "Buddy" Jones sent eight years ago as a Baylor University regent. The emails were made public in a filing in one of several ongoing Title IX lawsuits against the university, but don't appear to be related to any of the sexual assault investigations. Reached by the Tribune, Jones was contrite: "Sometimes people do stupid things," he said. "And this qualifies as one of mine from 2009."

• Guess who's in the news again? From lavish trips on taxpayers' tab to claiming "hazardous duty" pay on junkets to Hawaii, the Texas Alcoholic Beverage Commission has been under fire for most of 2017. Add this to the list: TABC was rebuked after asking a court to yank all permits for Spec's — the largest liquor retailer in the state — or fine the company more than $700 million. A multi-year prosecution and eight-day administrative hearing later, there was only evidence that Spec's may have paid an invoice a couple of days late. Judges let the company off with a warning and no fines, and criticized TABC for failing to prove dozens of its allegations. To cap it off, TABC's top lawyer resigned from her post Monday. For those keeping count, it's the third high-ranking official to leave the agency since The Texas Tribune's investigations began.

• Texas plans to hand over some of your voting data to the federal government. A federal panel created by President Donald Trump to examine his claim — one with no evidence thus far — that millions of people voted illegally in the 2016 election has asked states to provide publicly available voting data. Several Republican and Democratic states have said they'll pass on providing the information — everything from full first and last names to how people voted in elections since 2006. Texas Secretary of State Rolando Pablos said he plans to comply with the request, as long as the records are public under state law. Critics are concerned with individual privacy and have questions about how Trump's commission plans to use the data. But Texas already releases much of this information under open records laws.

• From Ross Ramsey: The special legislative session in Austin is around the corner, and many Texas Democrats would rather be elsewhere. You might want to keep an eye on New Orleans, for tactical reasons.

• Here's what happened when an Austin-based writer's quest to learn his grandfather's story led to death row: He found a prison psychiatrist testing LSD on inmates.

• U.S. Sen. Ted Cruz got an earful from protesters during a July 4 ceremony in the Democratic stronghold of McAllen.

• More than 20 states allow all mail-in votes for elections. Why isn't Texas one of them?

• Hassle and significant cost matter not to one of the largest counties in Texas — at least when it comes to paper ballots.

Frustrated with red light cameras in Texas? You're not alone., Fort Worth Star-Telegram 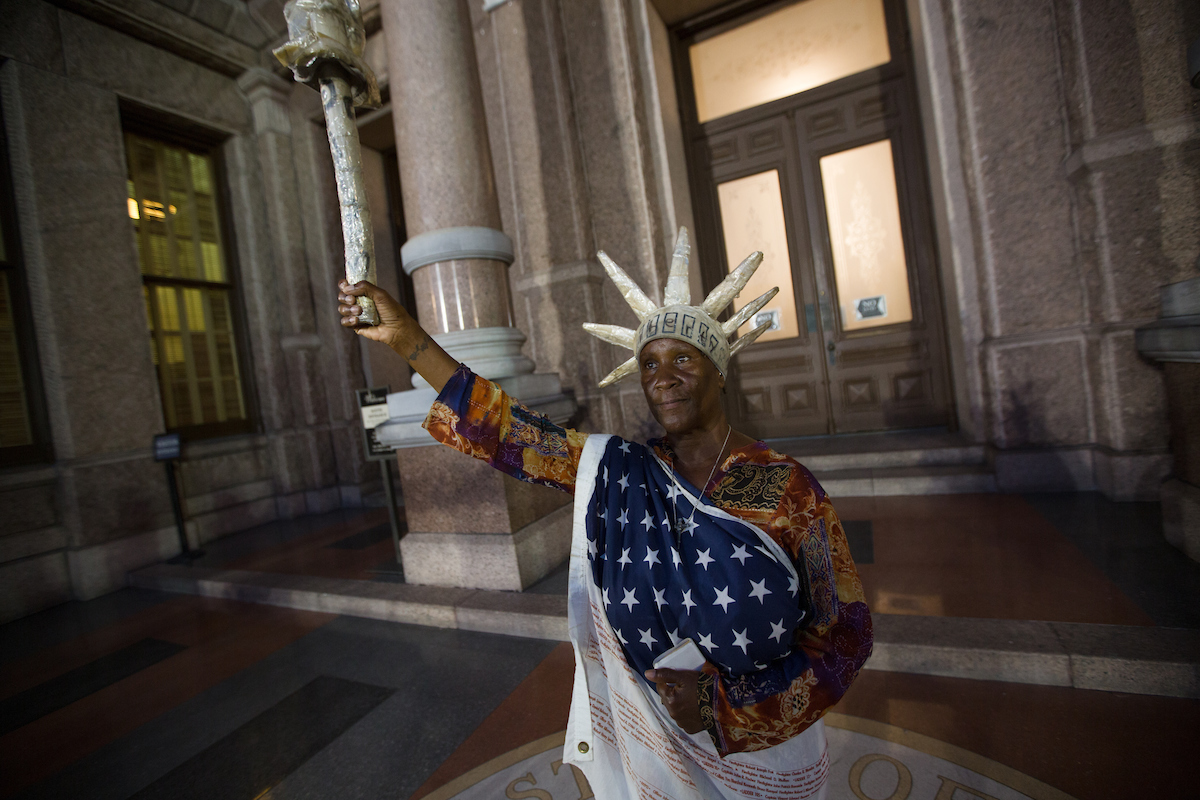 "Peace" stands at the Texas Capitol's south entrance during the Stonewall anniversary celebration on June 28. Photo by Austin Price. See more photos on our Instagram account.

"The question always comes: ‘How do I know that when I cast my ballot it’s recorded electronically?’”

— Frank Phillips, Denton County’s elections administrator, about why the county is going back to paper ballots.