Is it constitutional to redraw political maps based on partisanship? We may soon have an answer. The U.S. Supreme Court announced Monday it would take up a case from Wisconsin on partisan gerrymandering — but what could the move mean for Texas, a state entrenched in its own legal battle over redistricting maps? Here's what you need to know:

• The skinny on Wisconsin: The state drew district lines benefitting Republicans in a way that violated the U.S. Constitution, a federal appeals court ruled last year. The high court's announcement marks the first time in more than a decade it's taking up the issue, and depending on the ruling, congressional maps in as many as seven states could be affected — including Texas — according to Michael Li at New York University's Brennan Center for Justice.

• Texas has its own case to worry about. The state was dealt a blow in March when a panel of judges ruled that three of the 36 congressional districts in Texas were illegally drawn. The bruise worsened a month later when the same three judges raised concerns over the Texas map of state house districts, saying it intentionally discriminated against minorities in the state. Texas could lose the case, and with a trial on both maps set to begin in July, the state could find itself with new political maps ahead of the 2018 elections.

• What's next? It's unclear if the Wisconsin case could affect the pending case in Texas — while there's room for the high court to ultimately set a new limit on how politics drives redistricting, the justices also have to determine whether they even have the power to rule in the Wisconsin case. As for Texas, map drawing in the state could change if a ruling is made, providing critics of the current maps fresh fodder to challenge them. 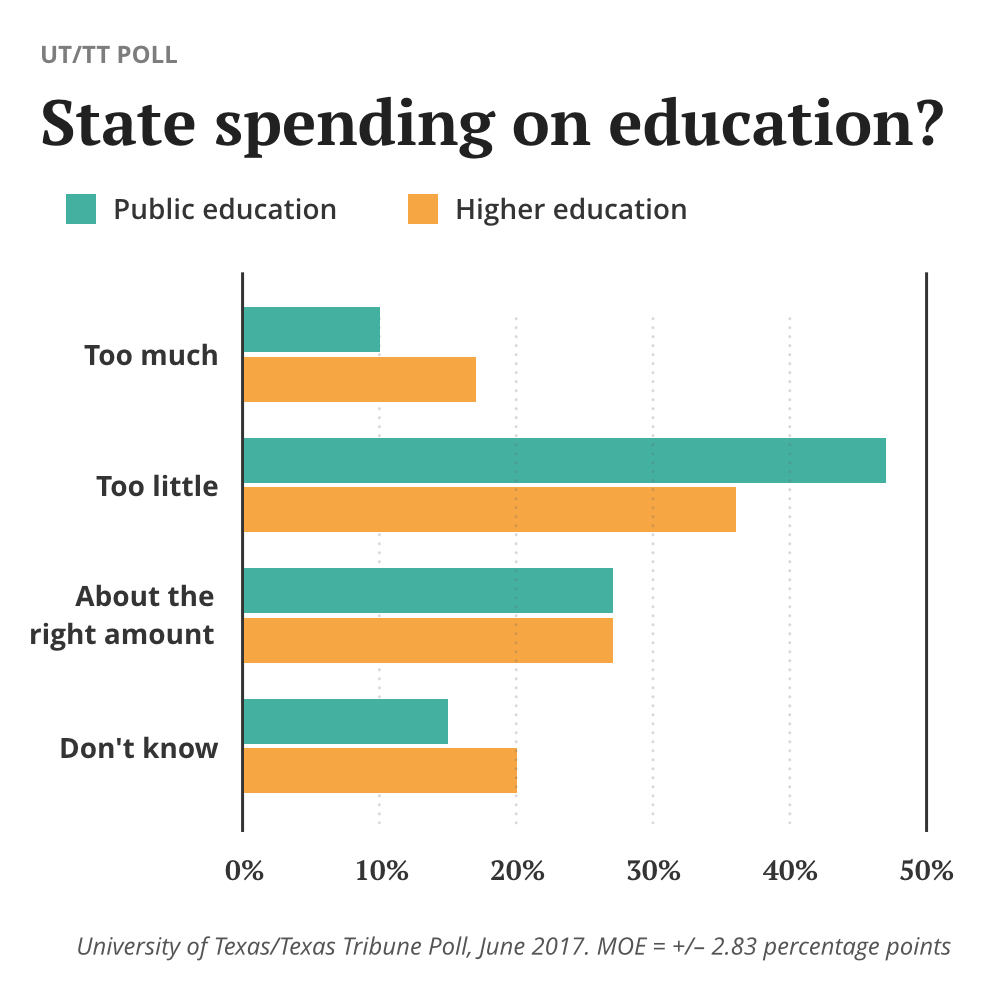 A plurality of Texas voters think the state isn't spending enough on public and higher education, while around 27 percent said the spending amount is about right in both cases, per the latest University of Texas/Texas Tribune Poll. Here's more:

• Republican voters are the most satisfied with public education funding. While 41 percent said the state spends about the right amount, 69 percent of Democrats said the state is spending too little on primary and secondary education. In a February UT/TT poll, 20 percent of those surveyed said the most effective improvement on K-12 education in the state was to increase funding.

• Remember the convention of states proposal the Legislature passed? Well, changing the U.S. Constitution isn't necessary, more than half of Texas voters said. Gov. Greg Abbott has been a longtime champion of the measure, which would allow states to meet and propose amendments to the U.S. Constitution. But none of the subgroups in the poll sided with the governor, despite the Texas Legislature adopting a resolution calling for a national convention in May.

Now, your take: Do you think Texas is spending too much, too little or about the right amount on public and higher education? Tweet us with #MyTexasTake.

• Texas Democrats are telling local leaders to hurry up and join the fight against the state's new immigration law.

• White nationalists who wanted to hold a rally at the Texas Capitol "grossly misled" state Rep. Matt Schaefer, R-Tyler, according to Schaefer.

• U.S. Sen. Ted Cruz told The Texas Tribune "of course" he will compromise on overhauling health care — but only if it's a move in the right direction.

• After it died in the final moments of the regular session, annexation reform will be back at the Texas Legislature in less than a month — this time, under a brighter spotlight than before.

• Sex offenders in Texas may get access to certain websites they're currently barred from after the U.S. Supreme Court ruled a similar law in North Carolina violated the First Amendment.

• Were you paying attention when Abbott revealed which bills he vetoed from this year's regular legislative session? Take our veto quiz to find out.

Local members of Congress react to Weslaco sailor who died in weekend ship accident, The Monitor

Texting and driving is already illegal in some Texas cities, but citations are rare, Fort Worth Star-Telegram 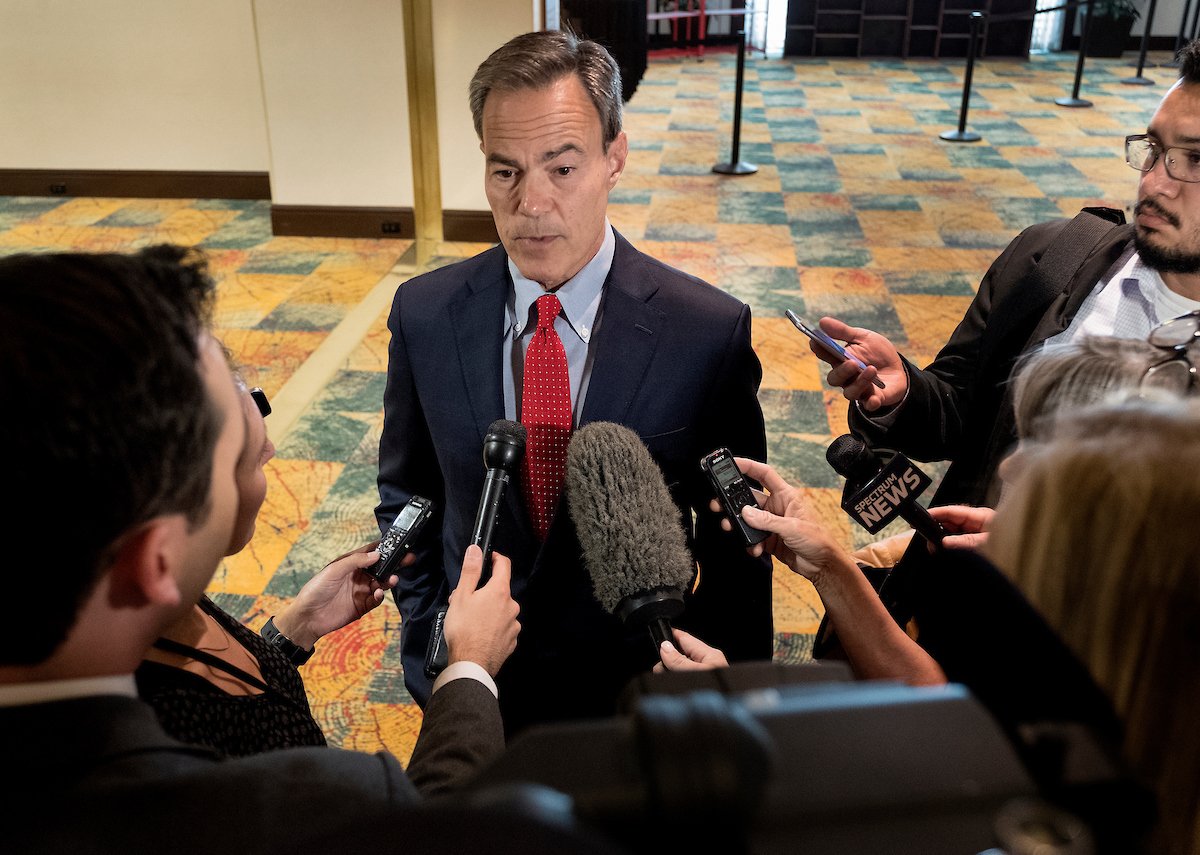 Texas House Speaker Joe Straus gaggled with reporters in San Antonio after taking jabs at the Senate on public education funding and the "bathroom bill" to hundreds of educators on June 14. Photo by Laura Skelding. See more photos on our Instagram account.

"I think we should keep working until we reach agreement, and when we reach an agreement we should vote on it. However long that takes — it shouldn't be driven by an arbitrary date on the calendar."