Wedged between the end of the regular 85th legislative session and a fast-approaching special session, Texas Gov. Greg Abbott vetoed 50 bills Thursday — the most a governor has issued since 2007 — while also signing multiple high-profile bills lawmakers sent to his desk earlier this year. Here's what you need to know:

• Why did the governor veto bills? Facing a Sunday deadline, Abbott said he mainly nixed bills that were unnecessary, costly or burdensome — or because the bill's author request he do so, out of preference for the legislation's counterpart in the opposite chamber. For at least two measures, though, Abbott said he vetoed them because the legislation was related to one of the 20 items he's already asked the Legislature to revisit in the special session starting July 18.

• Women's health services and trees were among those vetoed. Abbott said he overruled a bill that would have kept an advisory group on women's health services in the state operating because the measure did "nothing more than extend the expiration date of a governmental entity that has already completed its mission." And, amid talk about tree ordinances, Abbott also vetoed a bill that he said didn't go far enough in rolling back municipal tree regulations, among other measures.

• Abbott also signed a handful of bills into law. From legislation overhauling a future system grading Texas schools and districts on their performance, to another enforcing reports of police shootings, Abbott approved multiple bills Thursday. Other legislation the governor signed included the "Sandra Bland Act," a bill to end "lunch shaming" and a postpartum depression screening bill. 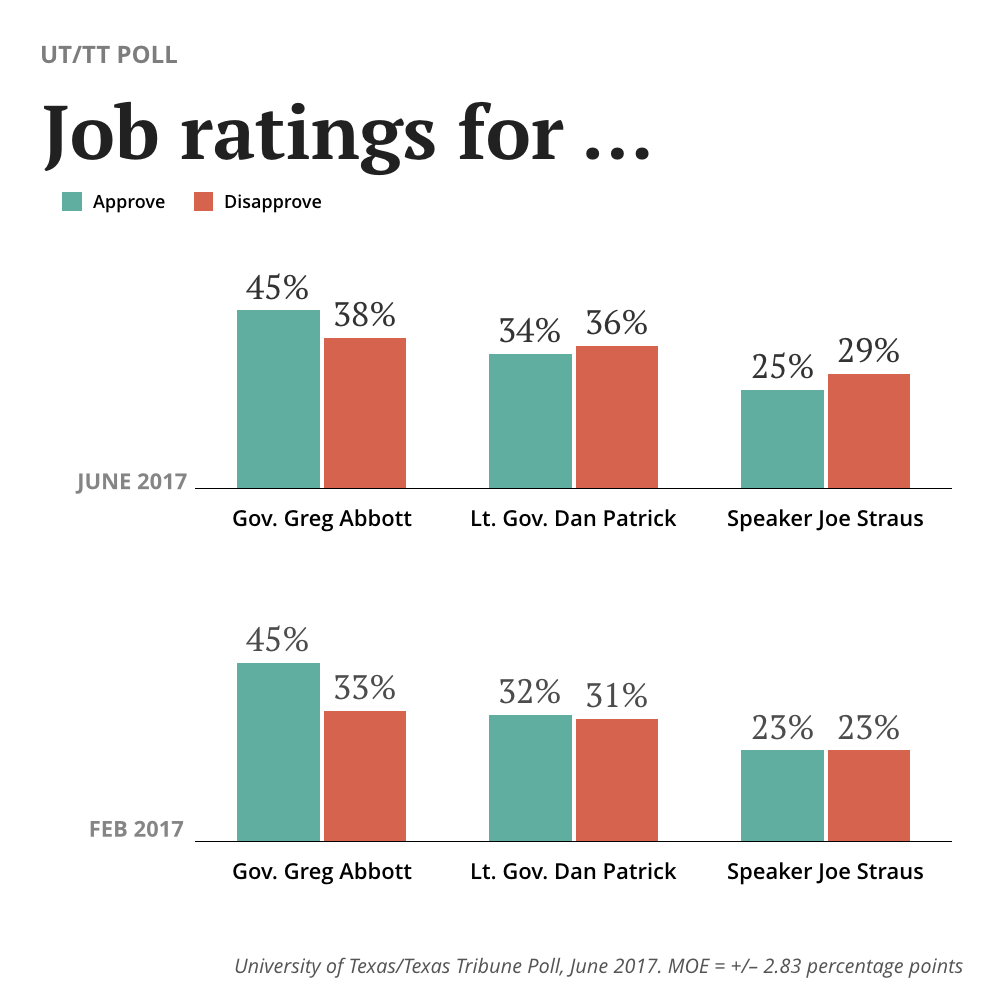 As the Texas Legislature is winding up for its special session, Abbott remains the highest rated state official among the big three, with 45 percent of voters giving his job performance a thumbs up and 38 giving it a thumbs down, according to the latest University of Texas/Texas Tribune poll. Here's more:

• Texans are concerned about immigration and border security, according the poll. Other issues such as education and health care trailed behind, while items from property rights to the environment hardly registered among those surveyed.

Now, your take: What do you think of Abbott, Patrick and Straus' job performance so far this year? Tweet us with #MyTexasTake.

• The Texas Supreme Court may rule this morning on a case involving same-sex marriage benefits in the city of Houston. Follow Texas Tribune reporter Emma Platoff for updates.

• A day after the shooting of a U.S. congressman rocked the nation's capitol, baseball brought together the Capitol Hill community.

• Gov. Greg Abbott also signed bills Thursday to allow cars to operate on Texas roads without a driver inside, to permit child welfare providers to use religious beliefs to decide adoption services and to ensure parents can see their deceased children's bodies.

• Did Texas leaders stray too far in enacting voting laws that were found to have disproportionately burdened minorities?

• Despite the "Texas Miracle," finding affordable housing is still difficult for many urban dwellers.

• The Texas attorney general is part of a bipartisan group of state attorneys general investigating opioid manufacturers' role in the nation's deadly epidemic of opioid abuse.

• Various business groups in Texas are teaming up to keep a two-way trade agreement between Texas and Mexico strong.

Pence hires outside counsel to deal with Russia probe inquiries, The Washington Post ($) 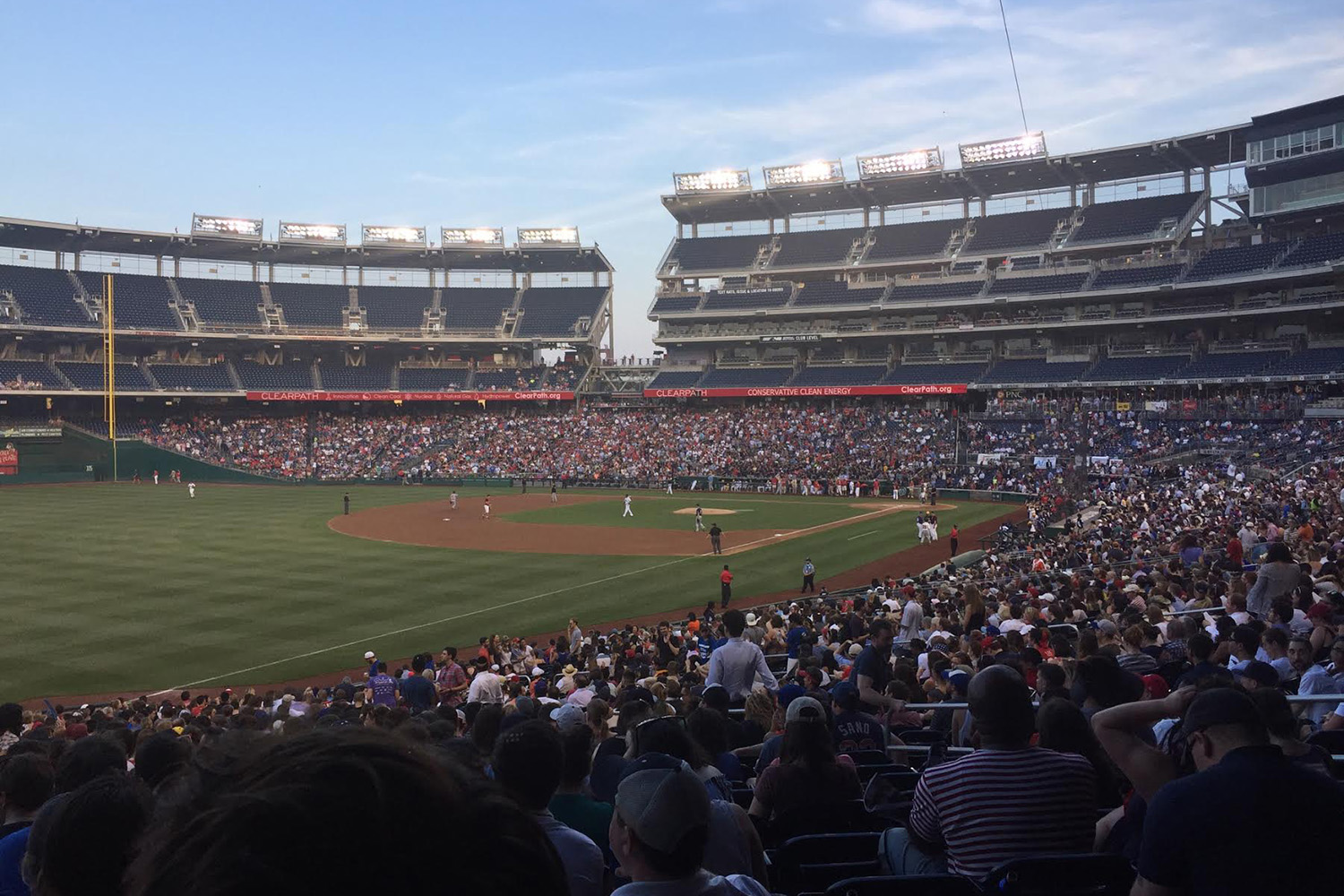 The Congressional Baseball Game for Charity at Nationals Park in Washington, D.C. on June 15, the day after a shooting at a practice for the game. Photo by Abby Livingston. See more photos on our Instagram account.

"How can one guy hold up the will of the people?”

— Mike Stewart about the annexation reform bill that died in the regular legislative session's final moments after state Sen. José Menéndez began to filibuster the legislation.