Nearly two years after The Texas Tribune and ProPublica first started trying to understand how a massive hurricane could affect the city of Houston, a lot of uncertainty remains. And, 18 months after asking for specific information about what could happen if any of the thousands of oil tanks along the Houston Ship Channel ruptured during a massive storm, the documents that finally arrived shed little light. Here's what you need to know:

• In March 2016, Hell and High Water was released. The Texas Tribune and ProPublica investigated Houston's massive oil refining complex and the effect a major hurricane could have on the area — with a damaging oil spill being one likely consequence. We asked for documents submitted by oil refineries and storage terminals along the 50-mile waterway known as the Houston Ship Channel, trying to find answers to questions like: Were companies that owned the tanks prepared? Did communities understand the risk? What arrived 18 months later was underwhelming.

• Here's what we do know. Thousands of storage tanks holding the world's largest concentration of oil, gases and chemicals line the Houston Ship Channel. If a hurricane hits it just right, more than 25 feet of water could be sent up the channel, and if even one tank ruptured because of it, hundreds of thousands of people could be affected. Other details, such as what companies are prepared for or things that residents can do to protect themselves and their property, probably won't be publicly available until it's too late.

• And as hurricane season begins, one Texas leader is already weighing in. In a Houston Chronicle op-ed last week, Texas Land Commissioner George P. Bush asked local and state leaders to urge the Trump administration to fund a coastal barrier system for Texas, adding that protecting the state's coast had become his agency's No. 1 priority this year. "We are just as vulnerable to a major storm today as we were in 2008," he wrote, "and that's bad news."

• From Ross Ramsey: In a just-ended legislative session, the "Texas Miracle" comes down to earth.

• Republicans in Congress have four issues on their agenda ahead of the August recess, but investigations into Russian cyberattacks could derail them all.

• Travis County GOP chairman James Dickey was elected the new chairman of the Republican Party of Texas by a razor-thin margin.

• Prosecutors in the securities fraud case against Attorney General Ken Paxton asked the state's highest criminal court to overturn a ruling backing his push for a new judge.

• Gov. Greg Abbott pushed back an announcement on whether he will call a special legislative session.

Mayoral runoff gets even dirtier with release of mailer, San Antonio Express-News ($) 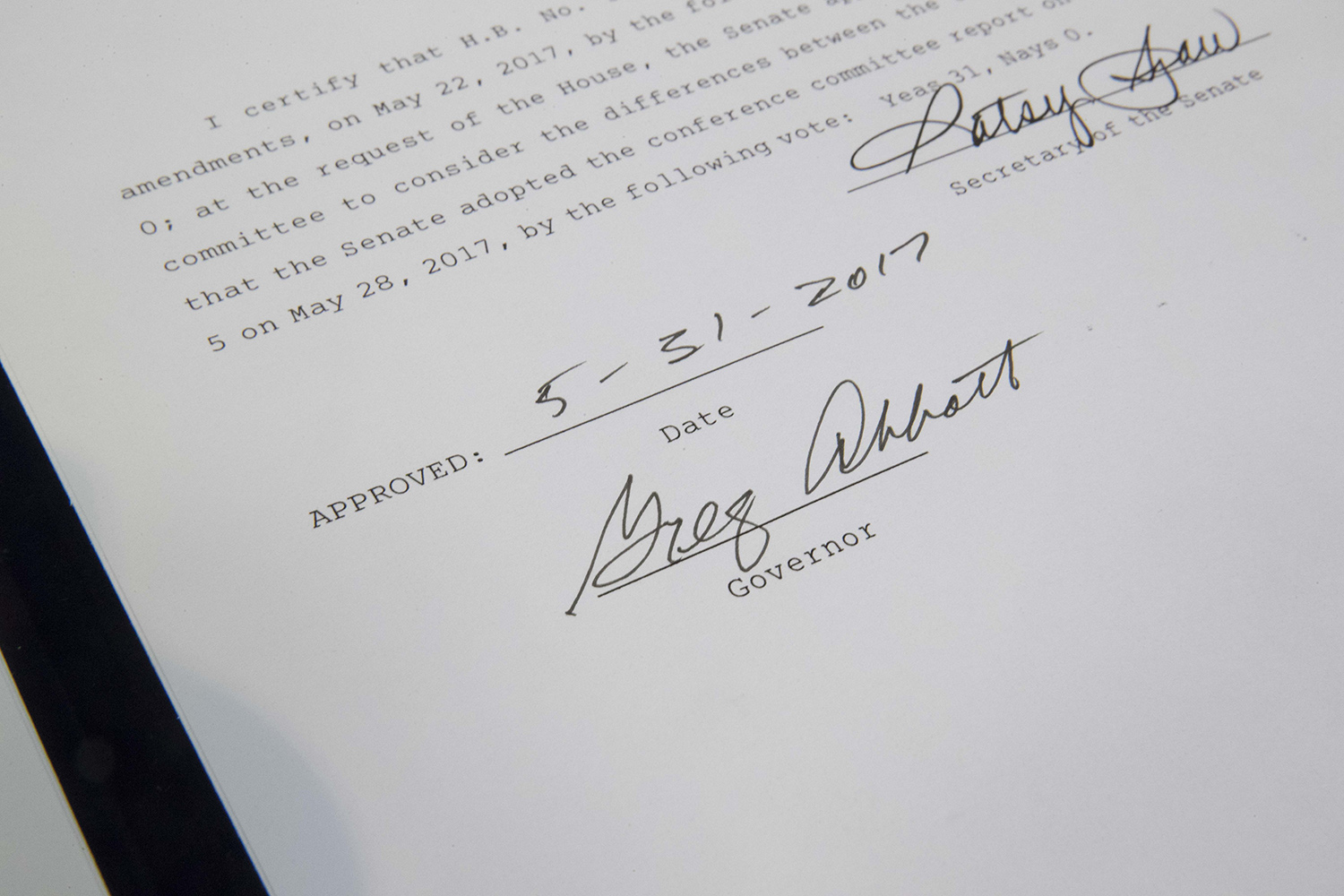 One of the several bills Abbott signed on May 31 reforming the Texas Department of Family and Protective Services. Photo by Bob Daemmrich. See more photos on our Instagram account.

"Many state politicians spent the better part of the 140-day legislative session robbing Texans of our most basic human rights, including access to safe abortion care — showing complete disregard for court rulings, medical science and people who need abortion care."