How to watch the Texas bathroom bill hearing live
A senate committee is scheduled to take up the so-called bathroom bill on Tuesday. The hearing is expected to draw hours of public testimony on the controversial proposal.

Harris County sees high number of exonerations compared to nation, study finds
In Harris County, there have been 133 exonerations in ordinary drug possession cases over the past few years, a unique finding considering low-level drug convictions rarely result in exonerations.

House school finance plan would add $1.6B extra to public ed
State. Rep. Dan Huberty, R-Houston, filed House Bill 21, which would infuse an extra $1.6 billion into the public education system over the next two years, combined with fixes to the school finance system.

Texas set to execute triggerman in San Antonio murder-for-hire case
Texas is set to execute hitman Ronaldo Ruiz 25 years after he killed a San Antonio woman for $2,000. It's the fourth time the state has set a date for his death. Prosecutors hope it's the last.

Breastfeeding protections get a hearing before House lawmakers
Bills lawmakers considered Monday would let nursing moms breastfeed virtually anywhere they choose and establish workplace protections for them so they don't have to pump or nurse in the bathroom.

Republicans expected to revise Texas "bathroom bill"
Texas Republicans are expected to offer a new version of the controversial “bathroom bill” on Tuesday with two significant changes,  according to a copy of a committee substitute obtained by The Texas Tribune.

Rep. Doggett: Obamacare repeal bill goes to U.S. House committees Wednesday
U.S. Rep. Lloyd Doggett said a GOP plan to repeal Obamacare will be reviewed by the Ways and Means and Energy and Commerce committees in the U.S. House on Wednesday.

Texas Senate to vote only on law enforcement-related bills Monday
Only bills related to law enforcement will be considered in the Senate on Monday, the first day of the legislative session when the House and Senate are allowed to pass non-emergency legislation.

More to know about the bathroom bill:

A complete history of the bathroom bill in Texas, Community Impact Newspaper

Bill would protect Texas workers' jobs over their political beliefs, The Houston Chronicle ($)

Trio of dyslexia-related bills in Legislature seeks funding, other help for kids with the reading disability, The Dallas Morning News ($)

Bring your friends and join us tonight for happy hour and conversation about the Texas Legislature at "On the Record" at the W Austin Records Room. 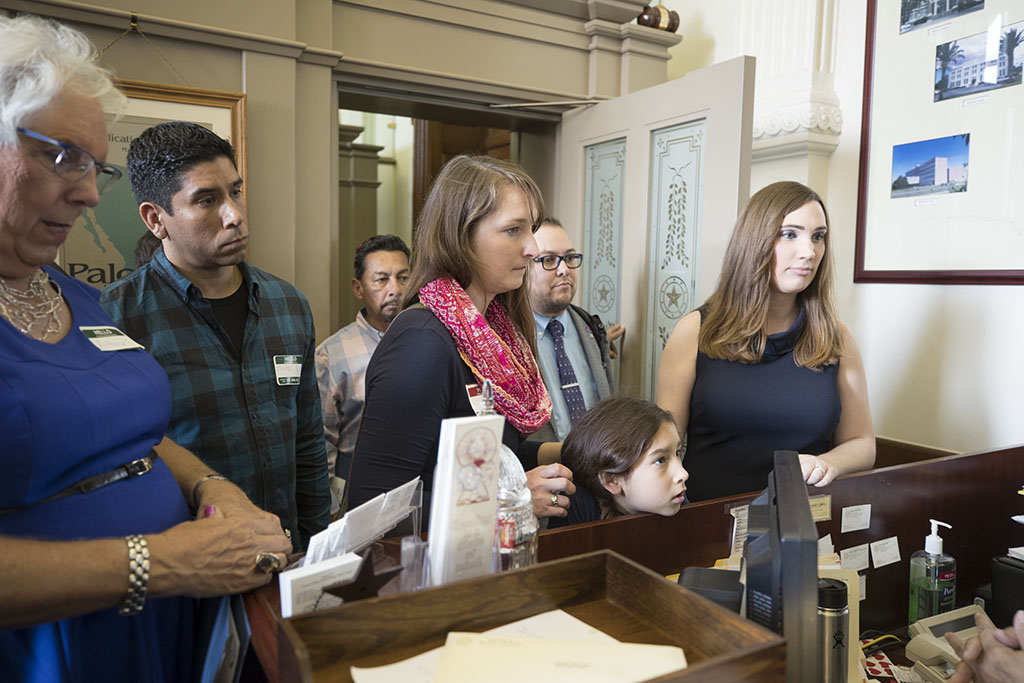 Advocates for #transgender rights crowd the office of State Sen. Eddie Lucio, D-Brownsville, after his unexpected support of the “bathroom bill” was announced Monday. Lucio, the only Democratic senator to support #SB6, was not available for a meeting. Photo by Bob Daemmrich for the Texas Tribune See more photos on our Instagram account.

"Texans deserve to be able to digitally register to vote. Bills are already filed in both the House and the Senate to allow it."

— Bryan Jones, a tech entrepreneur, about Texans registering to vote online via TribTalk