For this week’s nonscientific survey of insiders in government and politics, we asked about future threats to state revenue collections.

Revenues and budgets are on the minds of lawmakers these days after Speaker Joe Straus' "sober-faced pep talk" and worries about the fiscal implications of multiple lawsuits directed at the state.

How troubled are those waters? We began this week's inquiry by asking the insiders what should worry most the person who will be tapped to succeed John Otto as the head of House Appropriations. 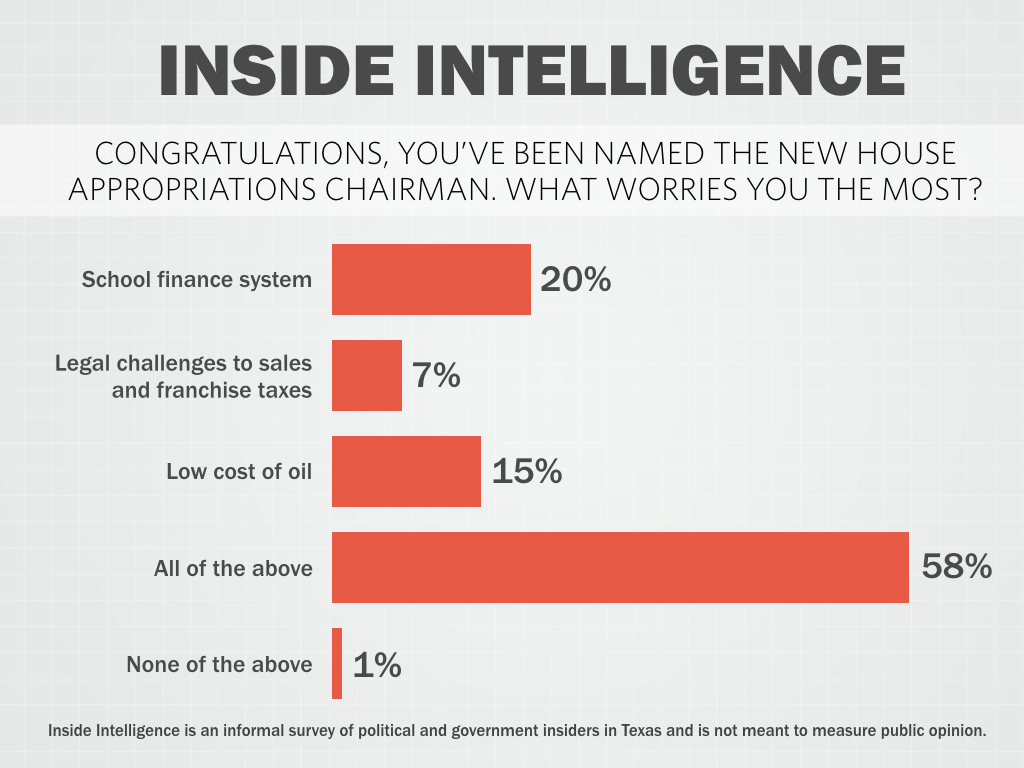 Congratulations, you’ve been named the new House Appropriations chairman. What worries you the most?

• "You only listed revenues. I'm worried most about expenses (like health care and insurance and other things that costs what they cost regardless of the price of oil or sales tax collections)."

• "It's not going to be a fun year on appropriations. But, in classic Joe Straus fashion, the budget process will conclude in an anti-climactic way with a reasonable, generally conservative, but also fairly responsible budget."

• "Oil, while very important, isn't nearly the economic driver it once was thanks to the diversified Texas economy. School finance, on the other hand, has the potential to gum up the budget like nothing else."

• "All of the above, but especially the low cost of oil. Not because oil will stay low; but rather, because the State relies heavily upon a commodity price they cannot control."

• "The person with real worries is the chair of Ways & Means. There's no way out of this without more money." 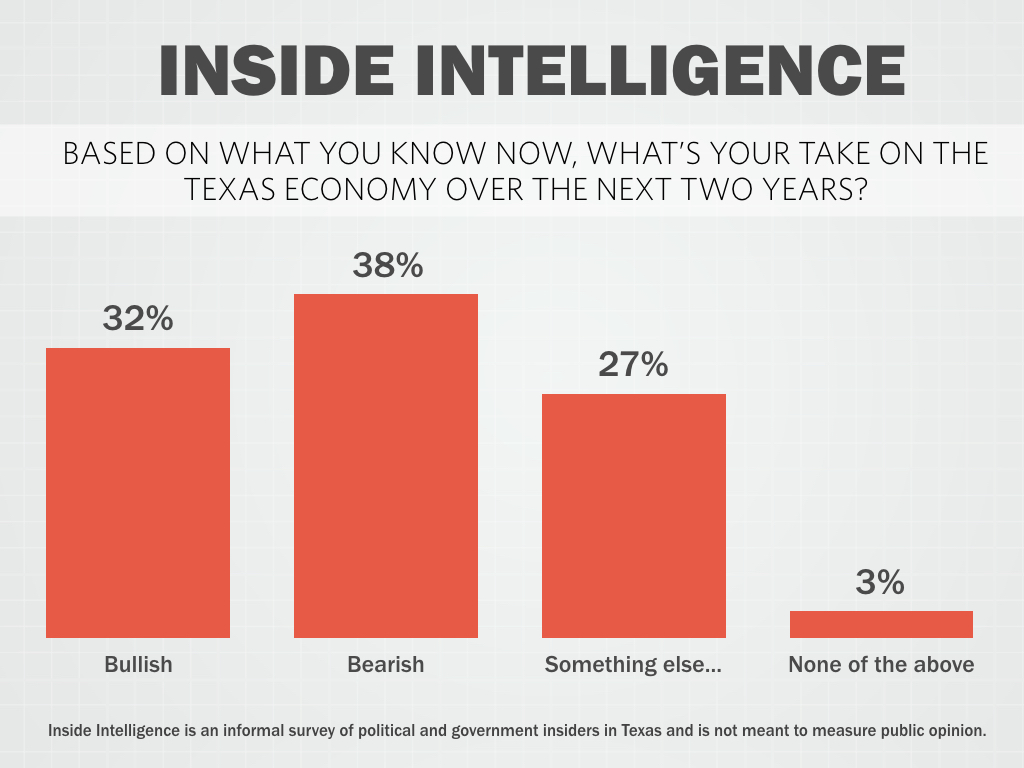 Based on what you know now, what’s your take on the Texas economy over the next two years?

• "WTI is at $41 today, which is about $20 less than a year ago. Hard to see it rising much higher. As oil and gas sputter along, eventually the ripple effects will make their way through the rest of the economy."

• "I'm fearing a natural disaster and other problems to be named later!"

• "Oil and gas are much more important to the Texas economy and revenue than many want to believe. The state's economic peaks and valleys still follow the drilling cycle. You'd think we'd be past that by now. But we ain't. If oil and gas stay down, Texas goes down — some." 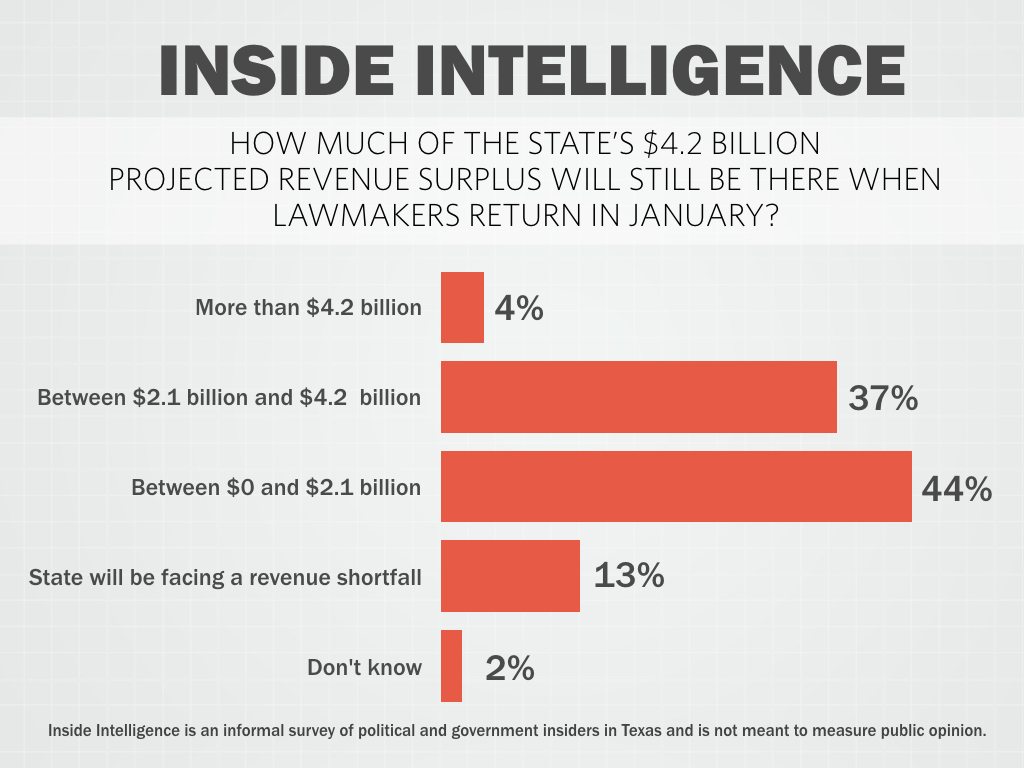 Based on what you know now, how much of the state’s $4.2 billion projected revenue surplus will still be there when lawmakers return in January?

• "The $4.1 billion 'surplus' in the October CRE includes $3.5 billion in dedicated GR balances, so the next Lege will be lucky to have any 'regular' General Revenue that's not already committed to something. 2016 General Revenue collections will be at least 2 percent short of the Comptroller's most recent forecast. Best case scenario: local property taxes for schools continue rising enough to reduce state aid, freeing up money that's already been appropriated so it can be used for any shortfalls (Medicaid supplemental, natural disasters, etc.)"

• "With zero-based-budgeting, there's no such thing as a budget shortfall. Who says you have to spend everything you spent last year plus population growth! You don't."

• "As much as we like to 'fool' ourselves into thinking we have a diversified Texas economy, we are STILL heavily dependent upon old man oil; his troubles are our budget troubles."

• "The surplus will be there, but the items for the supplemental will quickly erase that amount. The real question is, will the Legislature have the will to draw down the Rainy Day Fund?"

• "It's not really a 'surplus' in the sense of extra money. Just a cash balance, most of which is actually GR-Dedicated funds." 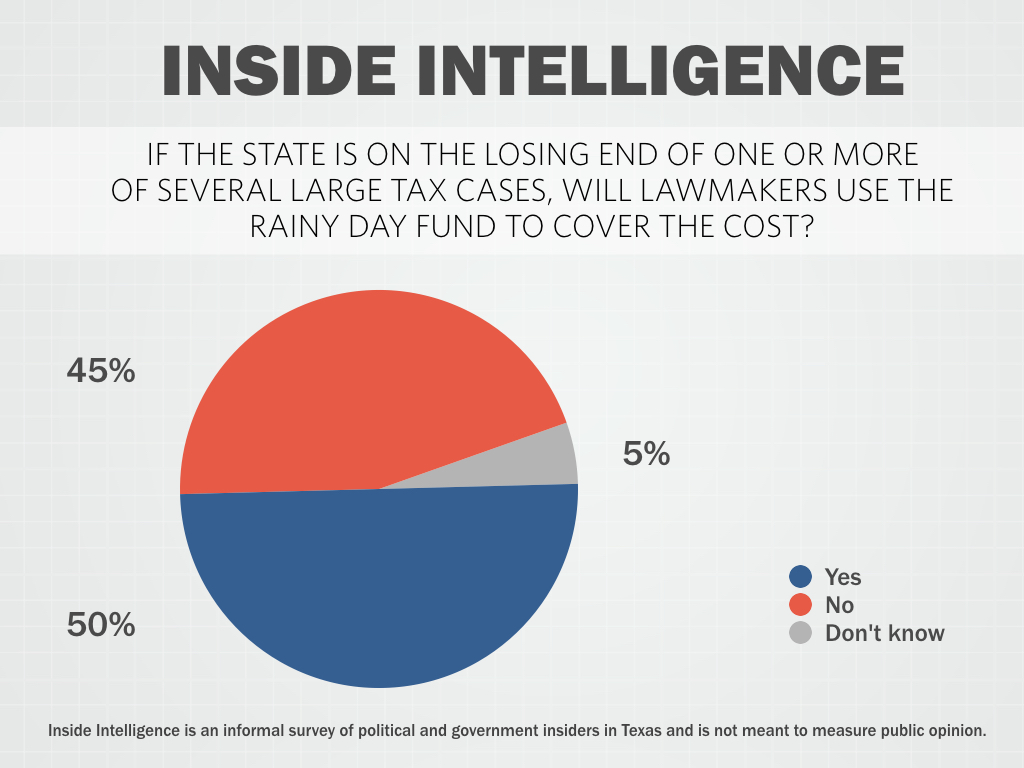 If the state is on the losing end of one or more of several large tax cases, will lawmakers use the Rainy Day Fund to cover the cost?

• "They didn't use much of it when the budget cratered in 2011, and if that doesn't tell you something then nothing will."

• "Even though it would only take 16 votes to pass, the Senate won't get 19 votes to take up a bill to spend from the Economic Stabilization Fund."

• "They won't use the Rainy Day Fund directly if they can avoid it. Look for some sleight of hand to make things look more palatable. And also some payback against the industries that brought these lawsuits."

• "Even if Noah was building an ark, they won't touch the fund."