For years, a sticker affixed to more than 170,000 gas pumps in Texas featured a straightforward headline — "Fuel Feedback?" — alongside a toll-free number, email address and instructions for consumers with questions.

But in his latest effort to remake the embattled Agriculture Department, Commissioner Sid Miller opted to give the often overlooked stickers a makeover. Under the new design released last week, Miller's name is in a larger font and is now featured prominently across the top. And near the bottom, he's added a new disclaimer likely to rub some lawmakers the wrong way.

"All motor fuel taxes are set by the U.S. Congress and Texas State Legislature, NOT by the Texas Department of Agriculture or Texas Agriculture Commissioner," the new sticker reads.

The fuel stickers are intended to notify consumers to contact the Texas Department of Agriculture if there is no state registration on the pump or if they have a complaint. The department's wide variety of duties includes checking gas pumps for accuracy.

The department unveiled its new sticker this month, partly in order to add a breakdown of how much federal and state fuel taxes are levied on each gallon of gas, as required by a bill passed last year and authored by state Rep. Dwayne Bohac, R-Houston. To keep the Agriculture Department from having to expend additional funds on the new stickers, House Bill 991 also stipulated that new stickers not be issued until the inventory of the old "Fuel Feedback" stickers has been exhausted. 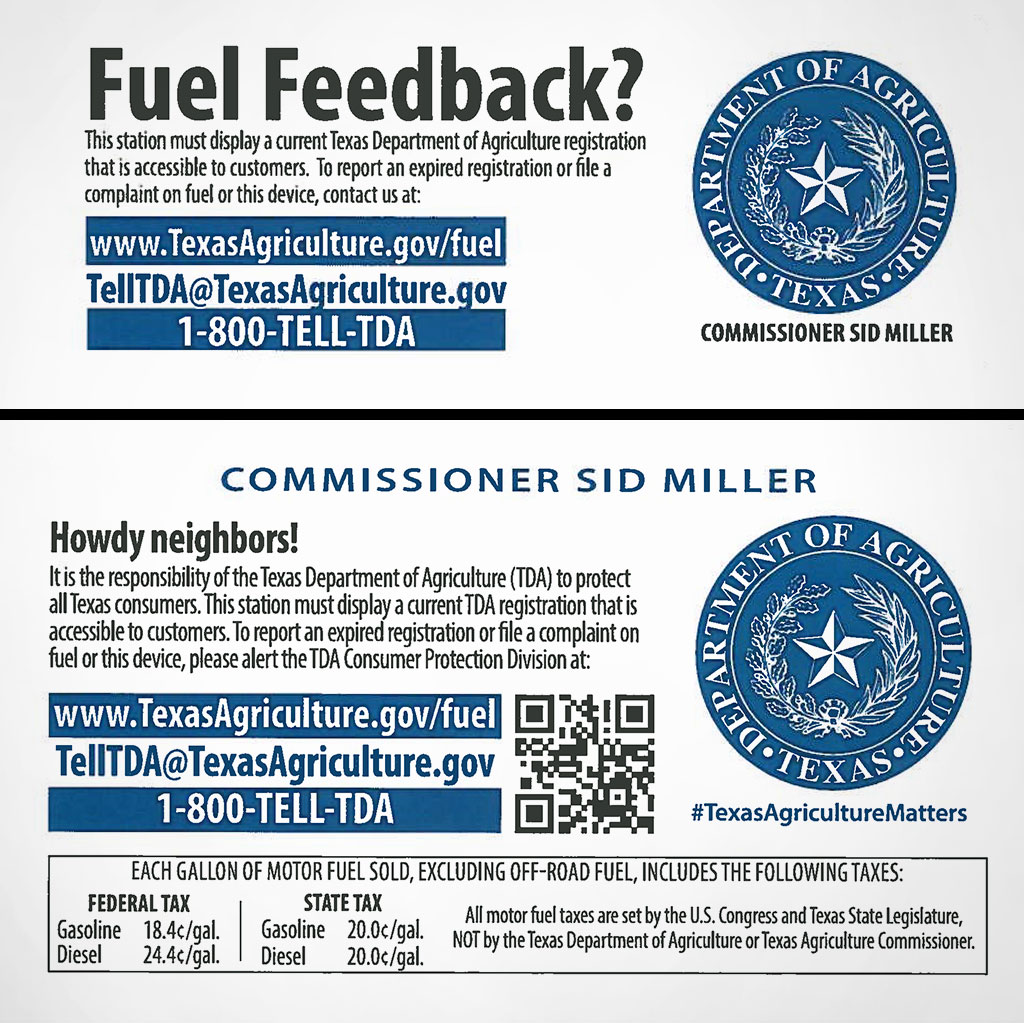 According to records obtained by the Tribune, the new stickers came with a more-than $91,000 price tag. When asked if the Agriculture Department had purchased new stickers before it had gone through its inventory of old ones, Jason Fearneyhough, the agency's deputy commissioner, wrote in an email that there were "less than 1,000" remaining.

When asked why the commissioner's name is larger on the new sticker, Fearneyhough said, "The individuals involved in the design are not currently in the office."

The new language on the sticker is unlikely to help Miller's already strained relationships at the Legislature, where he clashed with lawmakers last session after asking for a major increase in state revenue for his department. When legislators refused to approve his budget that amounted to almost $50 million beyond the department's last two-year spending plan, Miller responded by hiking the department's fees — in some cases, more than doubling them — for a long list of licenses, registrations and services it provides. Along with checking gas pumps for accuracy, the agency is responsible for licensing and certifying agricultural products, verifying that grocery store scanners work properly and checking that metal scales properly display weights.

Miller went forward with the new fees, which took effect January 2016, despite criticism from Lt. Gov. Dan Patrick and a letter signed by 72 lawmakers expressing their "deep concerns" with the plan.

The ag chief also faces a criminal investigation by the Texas Rangers, who are looking into his use of taxpayer funds to bankroll two out-of-state trips. The investigation follows complaints filed by the liberal advocacy group Progress Texas, which asked the department's investigative unit to review two state-paid trips the Stephenville Republican took in February 2015 after media reports indicating he may have traveled for personal benefit, including to participate in a rodeo and to receive a controversial injection known as a "Jesus Shot."