CRYSTAL CITY — Leaning forward on a two-seat swing beneath a shady tree, Ricardo Lopez ticked off his lofty political ambitions: First, win his re-election bid for mayor in this South Texas town. Next, swiftly resign to prepare for an all-out sprint for Texas lieutenant governor. After that, maybe focus on something more grandiose.

Why? “There’s a need for it, sir,” answered the Democrat, who just minutes earlier had shaved, slicked back his hair and put on a charcoal suit accented with a pocket square. “I don’t want to run because I want a higher position. I want to run because I can help. There’s corruption all over. There’s thousands of towns like this in America.”

Never mind that he is facing the prospect of years in federal prison, and his constituents can't miss images of him in handcuffs on the local news. Six weeks after federal agents arrested most of Crystal City's top elected officials including Lopez in an alleged kickback scheme, the relatively poor town of 7,500 still has no functioning government.

Meetings have been canceled and major decisions put off. Contracts sit unsigned, and bills are past due. Few officials — if any — are quite sure how much money Crystal City has in the bank. Only one of five councilmen is not facing the prospect of years in federal prison. It’s not Lopez.

The 40-year-old stepped down from the mayor’s post in February amid a sweeping recall effort. The petition drew more than 1,000 signatures. But Lopez, who calls the recall effort flawed, is running again. He expects to win, he told the Tribune this week in an interview outside of his squat white house.

The 90-minute conversation offered a glimpse into the psyche of a leader of what one Washington Post headline writer mused “might be the most corrupt little town in America.”

Lopez — who says he has no steady job beyond selling used cars he buys on Craigslist (Crystal City does not pay its mayor or council members) — shrugged off his legal troubles. He spoke of political affiliations not in terms of Democrats or Republicans, but factions lined up behind families. He portrayed himself as a would-be reformer who was forced out of a government riddled with corruption elsewhere.

“I’m being accused of bribery, right? And there‘s certain things people don’t know, and they’re not allowed to know yet. Why? Because there’s a big investigation,” he said. Excepting himself, “everybody who’s been in the city council has ripped off this town,” Lopez added. “I didn’t touch anything. I didn’t grab any money.”

Lopez says he did accept a brown paper bag filled with $40,000 cash last summer from Ngoc Tri Nguyen, the “8-liner” gaming room operator also indicted in the alleged cash-for-favors scheme. The money was payment for a building he sold the businessman known as “Mr. T.,” Lopez says.

He says he was initially wary of the unorthodox payment, but figured it best not to ask questions.

“There, I asked the man, 'I don’t want to even ask what kind of business you’re doing because I’m afraid you’re going to tell me something that I don’t want to hear,'” he said.

All have pleaded not guilty and are out on bond. 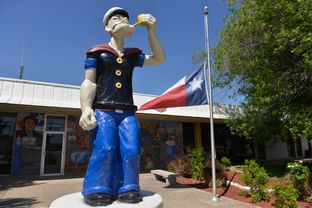 Enlargephoto by: Robin Jerstad
A statue of Popeye the Sailor Man stands at the front of the Crystal City City Hall. The struggling South Texas town calls itself the "Spinach capital of the world."

Those accused aren't talking to the news media — except for Lopez.

His resignation followed Roel Mata’s. Rogelio Mata resigned this month. Jonas was suspended, and Rodriguez faces a recall election in May, after a judge ordered the city clerk to verify signatures on a petition that sat idle for months.

Needless to say, gathering a quorum on the council these days is a pipe dream, though several councilmen dodged meetings even before the arrests.

Buck Wood, an attorney who has spent 45 years involved in ethics, school finance and election law in Texas, said last month that he’s never seen such an epic collapse in local government.

Now, Lopez wants Crystal City's votes again, a development that surprised some residents here. He filed for a spot on the ballot before the indictment but chose not to withdraw his name ahead of the deadline.

“It’s hard to believe how he can have the nerve. It’s an insult to the community,” said Richard Diaz, a former city councilman and income tax preparer who was involved in the recall effort. In a follow-up interview, he added: “I would say he’s not on his five senses, you know?”

Lopez was a latecomer to Crystal City, the self-proclaimed “Spinach Capital of the World,” and host, during World War II, of a camp that interned thousands of Japanese Americans, German Americans and Italian Americans considered “enemy aliens.”

Born in Brownsville but raised in California, Lopez moved to Austin in his 20s, working as an anesthesiology technician at two hospitals. He also gained experience in the city’s booming tech sector, he said, before moving to Crystal City some five years ago.

“I’m here because of my wife,” he said, adding with a sarcastic chuckle: “She brought me to this beautiful, gorgeous town.”

They bought a house for $7,500, where they now live with their two children. She sells chocolates and edible arrangements in town. Sometimes he helps, Lopez said, but not a whole lot. He spends much of his time searching online for cars to buy and resell for a profit, he said.

“This is what I do, instead of texting people or whatever. I look for cars on Craigslist."

(Later in the interview, he spotted two tattooed men checking out the 2002 BMW with a smashed headlight and bumper parked outside of his fence, which he said he bought for just $1,500. “See?” he whispered to a reporter, then shouted to the men: “If you want to drive it, let me know.”)

Before 2014, Lopez never dabbled in politics. But one day he read a newspaper article detailing some trouble in city hall — a mayor who resigned after a short tenure marked by discord on the council.

“And I said why not?” Lopez told the Tribune. “I’m going to run. I’m going to do something about it. Why? I don’t know. Something told me to run. And I did.”

Without campaigning much, Lopez won a May 2014 election by a few dozen votes.

The highlights of his tenure? An anti-bullying campaign he launched in the local schools topped the list, he said. He also visited the White House for President Obama’s conference of U.S. mayors and made an unsuccessful push to build a recycling center in town.

“The council didn’t listen to me,” he said of the recycling effort. “They don’t know anything about trash, and they thought it was a waste of time.”

Lopez alleges that other councilmen used city coffers as their personal piggy bank and says he tried to find out precisely what was going on.

Then the feds showed up to haul nearly everyone away.

The federal government alleges that Lopez made some specific deals with Mr. T.

It alleges that the mayor sought and received several payments from him, including $6,000 to buy a vehicle in exchange for actions that helped Mr. T set up his gaming rooms in town — waiving tax payments, closing competing gambling rooms and tainting inspections to the businessman's benefit.

The indictment lists a November 2015 phone call in which Mr. T offered to “call it square” on some of the mayor’s debts if he helped lower the businessman’s tax bill. Days later, the document alleges, Urrabazo told Lopez that he would “receive at least one” for helping Mr. T purchase some land.

Lopez denies those charges. But he says he did deal with Mr. T, who wanted to buy a small building — just around the corner form the mayor’s house — to set up an online gambling shop.

The mayor said he was renting to own the building at the time. For a few months, he sublet the space to the businessman, who one day started major renovations.

Lopez recalled telling the gaming room operator: “If you have this much money, you’re going to do online gambling, and you’re going to knock down walls, why don’t you just buy the place and leave me out of it. Because I’m the mayor and can’t be in between this stuff.”

The next day, Mr. T showed up with the $40,000, Lopez said. The Democrat says he handed $35,000 to the building’s original owner, pocketing the difference.

Lopez suggested that the payments listed in the indictment were simply related to those deals, and he showed the Tribune notarized documents purporting to be a lease agreement with Mr. T and a bill of sale.

That’s why Lopez believes the federal government and Crystal City’s voters will vindicate him. Then he’ll start campaigning for lieutenant governor.

“I would really focus, and try to find a solution for the small cities,” he said. “Corruption needs to go. It needs to stop.”