Athletics continues to be a high-dollar enterprise for Texas colleges. The eight public Texas universities that play in the Football Bowl Subdivision — the top level of college football — spent more than $525 million on athletics in the 2014-15 school year. Football is consistently the top revenue-producing sport, followed by men’s basketball. This series looks at the finances of Texas universities’ athletic departments.

When five Division 1 teams from Texas earned their way into this year's NCAA men’s college basketball tournament, they reserved featured roles in a massive money-making event. Television broadcasts generate hundreds of millions of dollars for the NCAA, which regulates college sports. Sponsors’ ads are all over the arenas. Even first-round losers earn a $1 million-plus payout for their conference.

But when it comes to the overall revenue for many participants, the money from the NCAA tournament can hardly register a blip. College basketball teams in Texas — even the good ones — are rarely key moneymakers for their athletic departments. If schools want a profitable department, there’s usually only one place to build it: the football field. And only a few universities have the fanbases and conference affiliations to succeed.

That revenue is not evenly distributed. UT-Austin and A&M's football profits have approached $100 million in recent years. Texas Tech usually turns a more modest profit. And the rest of the public Texas FBS universities, which play outside of the major football conferences, consistently lose money on their teams.

(Private schools also have to file the reports, but they aren’t subject to open records laws and don’t have to make the reports public.)

Without football profits, managing a self-sustaining athletic department is nearly impossible. Critics might complain that college football coaches’ salaries are too high at the top schools or that university leaders overemphasize the sport. But a successful football team can prop up an entire athletic department, and a struggling football team can cause a university to miss out on millions. It’s not unusual for the less popular sports, like women’s tennis, to see their expenses outpace revenues by more than 5,000 percent. At UTSA, for example, the women’s tennis team earned $1,507 in the 2015 fiscal year, while spending $275,012.

“I know there are people within any university saying we ought not to be spending money on football,” Texas A&M University System Chancellor John Sharp said. “But sports like football pay for themselves, and generate money for virtually everyone else.”

Nowhere is that dynamic clearer than at A&M. Last decade, times were tough for the Aggies. Their beloved football team went the whole 10 years without finishing a season with an Associated Press Top 25 ranking. And its athletic department was frequently running a deficit.

In 2005, the university agreed to loan its athletic department $16 million to help get its house in order. Much of that money went to upgrade athletic facilities. But in next few years the school also gave head football coach Dennis Franchione a raise, and then, after few more difficult seasons, spent $4.4 million to buy out his contract.

The athletic department was expected to begin repaying the loan in annual $1.6 million increments in 2009. But the department struggled in the first few years, and had to lay off staff. The football team then had some disappointing seasons, and a move from the Big 12 conference to the Southeastern Conference cost the department about $12 million. Officials said the school “re-advanced” the department $5.2 million during that transition, allowing the department to restarting paying the money a little more than two years ago.

Around that time, the department’s fortunes reversed. It had a popular new coach, Kevin Sumlin. And a Heisman trophy-winning quarterback named Johnny Manziel took the sports world by storm. Basketball was struggling, but the football team was so successful that the department’s bottom line wasn’t hurt. Football games were selling out. Plans were made to rebuild the football stadium, Kyle Field. And donations poured in from alumni to pay for it.

NCAA financial reports show that A&M’s football revenue climbed steadily, up to $110 million in the 2015 fiscal year (during which the 2014 season is played). Total athletic department revenue rose to nearly $193 million, up about $100 million from seven years earlier.

That amount of money, which puts the A&M men’s athletic department in the top echelon of moneymakers in the country, isn’t likely to be sustainable long-term. Almost $50 million of it came from donations earmarked specifically for Kyle Field’s renovation, officials said. But they say the school’s new "normal” for annual football revenue is now around $60 million. That’s enough to create a financially stable, profitable department, they say.

Officials say the turnaround has benefited more than just the sports teams.

The department hasn’t required any kind of subsidy from the university since 2009, officials said. And now university officials are planning to reverse the flow of cash. Jeff Toole, chief financial officer for the athletic department, said A&M athletics has committed to sending the university some additional money back to assist "with some one-time expenditures.” 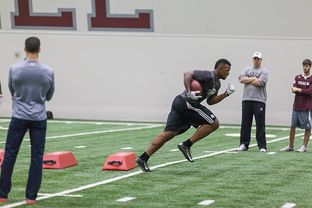 The exact amount it will send hasn’t been determined, Toole said. But the transfers will put A&M in rare company. Only a few dozen athletic departments — out of hundreds — in the country survive without some kind of subsidy from their university. Far fewer send money back to their school, though UT-Austin has done it for years.

“As we have the ability to provide funds to the university to assist in meeting academic needs while still achieving our core athletics mission, we intend to do so, as it it’s the right thing to do as part of Texas A&M,” Toole said.

Without football, the situation would be much different. A&M fans are known to be strong supporters of all their teams, showing up in the thousands even at women’s soccer games. But those other sports don’t pay for themselves. The women’s soccer team spent about $4 million in 2015, while generating about $3 million. Women’s softball spent $2 million, while earning $600,000. And men’s golf spent more than $1 million, while only bringing in $165,000.

UT-Austin and Texas Tech are in similar positions. Longhorn football is consistently one of the nation’s most profitable programs. Last year, the team turned a $94.9 million profit, compared with a $9.4 million combined loss for the rest of UT-Austin’s sports, documents show. Texas Tech generated $19.1 million profit in football, compared with a $14.4 million loss for the other teams.

Those big profits in football also pay for administrative salaries, and protect the universities from having to chip in institutional transfers to support the less popular sports. But the situation raises the question: If football is by far the sport that people on campus care about the most, why not simply focus on that and tone back the expenses for the other teams?

Athletics officials gave two reasons. One, gender equity rules require that comparable opportunities be available for men’s and women’s athletes. Colleges would violate federal law if they only devoted resources to football and men’s basketball. The other reason is that the schools say they take pride in all kinds of athletic success — not just in the revenue-generating sports.

“Each of those teams is a part of our tradition and part of our pursuit in excellence in all endeavors,” UT-Austin Athletics Director Mike Perrin said.

While few programs across the country come close to generating as much revenue as UT-Austin, the football team’s recent struggles have hurt the athletic department’s bottom line. Adding to those struggles, the team played one of its 2015 home games during a major storm. That caused a lot of stadium seats to sit empty, and missed opportunities for concession and ticket revenue. The department will have to look for ways to compensate, said Dave Marmion, chief financial officer for athletics.

“When we feel the effects of a losing season in football, is it as much as a school of a smaller budget? No,” he said. “But we do still feel it.”

Meanwhile, programs without cash cow football teams struggle to pay their bills. The UH, UTSA, UTEP, Texas State and UNT football teams all operated at a loss, even though their revenue ranged from $2 million to $7 million and far outpaced other teams on their respective campuses.

That leaves the departments searching for other sources to make up for the financial losses of the other teams. For example, at Texas State, the men’s golf team earned about $35,600, while spending about $282,000. At UH, the volleyball team generated about $15,000 in total revenue while spending about $784,000. So in those cases, the universities rely on millions of dollars from student fees and university subsidies to make up the difference.

UH sent its athletics department almost $26 million in student fees and university money in 2015, the largest subsidy among the Texas FBS schools. Texas State and its students contributed $24 million. The lowest subsidy came from UTSA, which contributed more than $13 million.

University officials say the money is worth it; college sports provide invaluable marketing and alumni outreach. But as the big budget schools keep trying to outbid one another on coaching salaries, facility upgrades and other expenses, the schools without those cash lucrative teams struggle to keep up, critics say.

Jamie Lovegrove contributed to this report.