For this week’s nonscientific survey of insiders in government and politics, we asked about your evaluation of the governor's first year in office.

At the beginning of the month, Gov. Greg Abbott released his "Report to the People of Texas," a self-evaluation of sorts of his first year in office. In response, we decided to get your take on how Abbott did.

When asked to assign a letter grade to Abbott's job performance, most of the insiders gave him either a B (36 percent) or a C (29 percent). Another 14 percent gave Abbott a D while 11 percent gave him an F. Just 9 percent awarded him an A.

We stayed with the classroom metaphor with the next couple of questions, asking at which governmental "subject matters" he performed best and worst.

A majority of the insiders gave Abbott high marks on roadbuilding and infrastructure. Nearly 40 percent thought Abbott performed well on border security while 34 percent thought he did well in managing the Texas miracle.

When asked in which subjects Abbott needs improvement, 65 percent cited ethics reform and 60 percent named affordability of higher education. Nearly half of the insiders mentioned his management of the Texas Miracle. 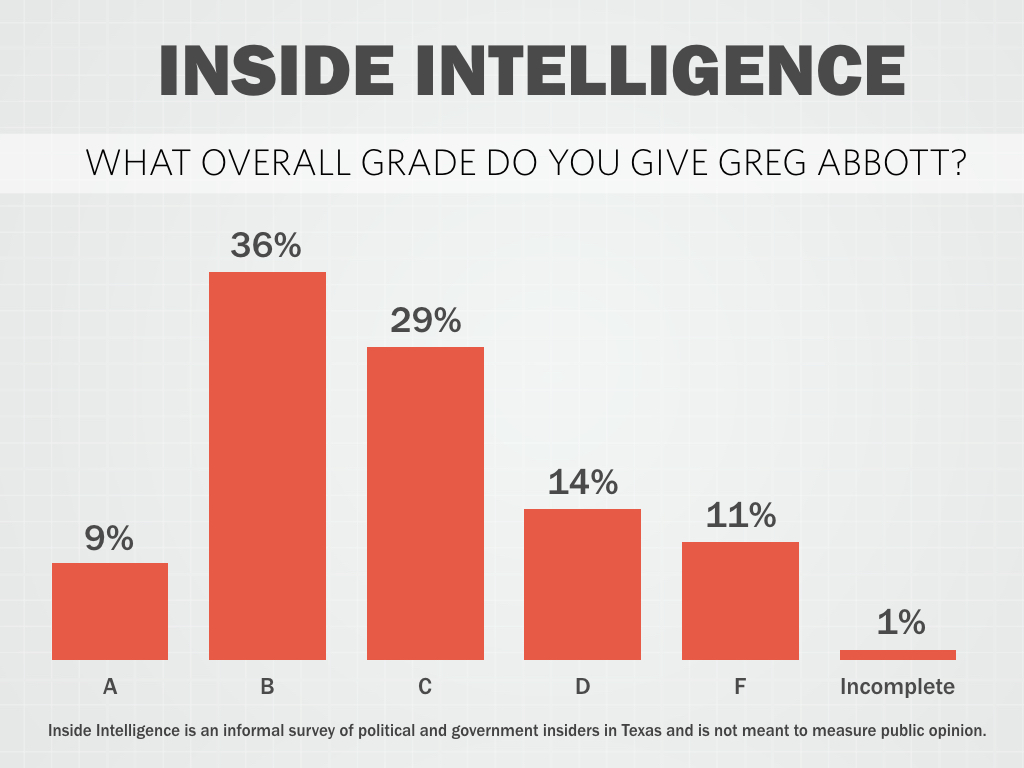 A year into Greg Abbott’s term in office, what overall grade do you give him?

• "It is evident that there is limited legislative experience on his staff. He's bounding to the right (as a candidate would) when all he needs to do is have a steady hand (as a statesman and leader would). Appointments are without appropriate due diligence. There is room for forgiveness as long as they learn from their mistakes and don't repeat them."

• "No major successes, only a few moderate stumbles. Not too shabby."

• "He's the smartest guy in the Governor's office for years, yet he keeps playing small ball and pandering to Dan Patrick's right wing. Nobody ever makes history by governing via worry."

• "Asleep at switch on many issues. Either he'll get better or we'll continue with a B-team administration."

• "I think he's gotten off track a little bit but I understand that he needs to appeal to the crazy wing of our party. I'd much rather have a sane Governor who sometimes acts crazy than a Governor who actually is crazy." 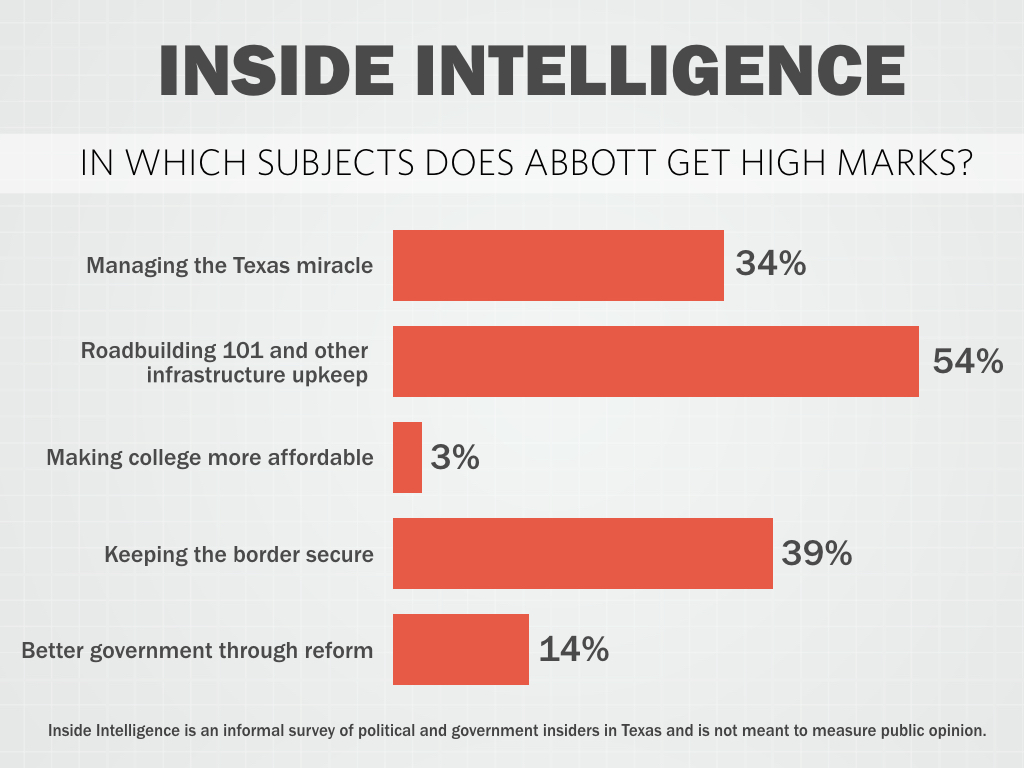 In which subjects does he get high marks?

• "The sum total of his involvement was signing the budget."

• "He really hasn't done much. The Lite Guv and Mr. Speaker are the ones in the driver's seat of Texas government. I am finding it hard to identify one subject and this is coming from an 'Insider.'"

• "Represents the State's interest forcefully and with enthusiasm at home and elsewhere."

• "I can't think of anything Abbott has really done well yet. He hasn't made (m)any major PR blunders, though, and that's worth something."

• "F) None of the above. We'd give him an 'A for effort' on ethics, but he didn't get that through because he forgot that he has to *negotiate* with the Lege, not dictate to them." 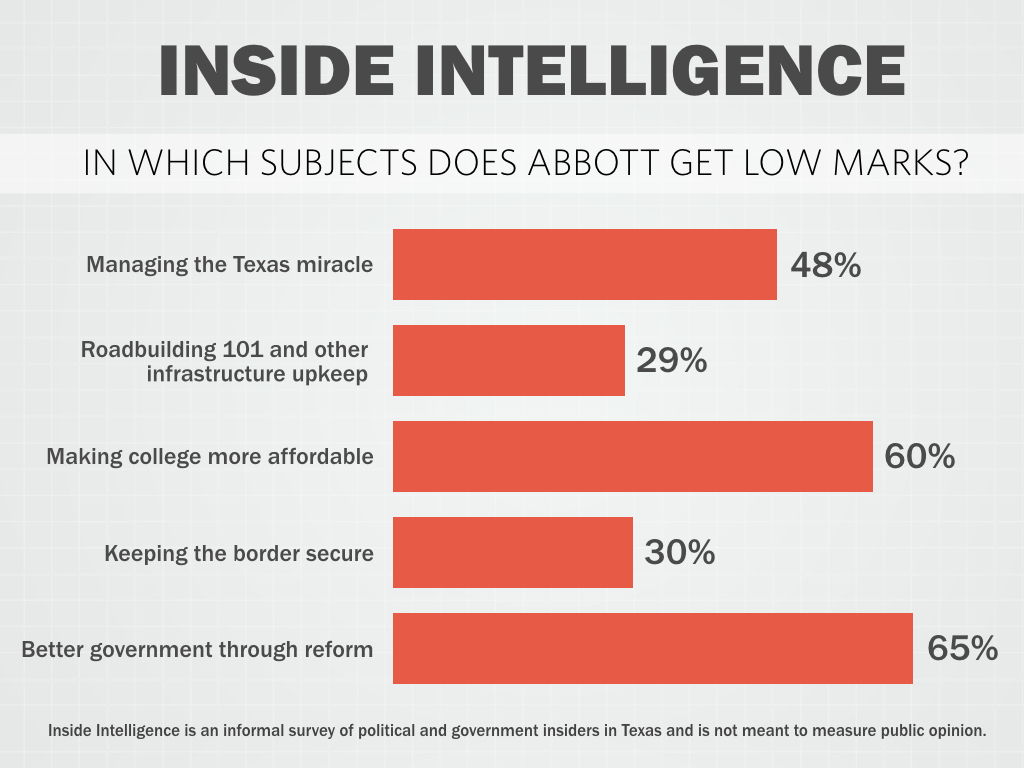 In which subjects does he get low marks?

• "The beauty of not doing much is that you can't get blame when the train goes off the rails."

• "As usual, the question makes no sense. His failure is primarily political: the ideological lens through which he has chosen to view the world is from the Limbaugh Bag of Tricks. Thought he would be better."

• "Back to the drawing board on additional funding for roads and bridges the oil glut has flat lined that idea currently. Time to revisit a gas tax indexed to the price of oil. If we had it, the state would be taking in gas tax money with $30 a barrel oil."

• "Abbott's belief-based, as opposed to experience-based, approach to the Texas Miracle is probably his area of greatest vulnerability. I fear that he's reading what the right-wing belief tanks put out as if it were factual."

• "Instead of leading, his entire agenda is based on fear of Patrick." 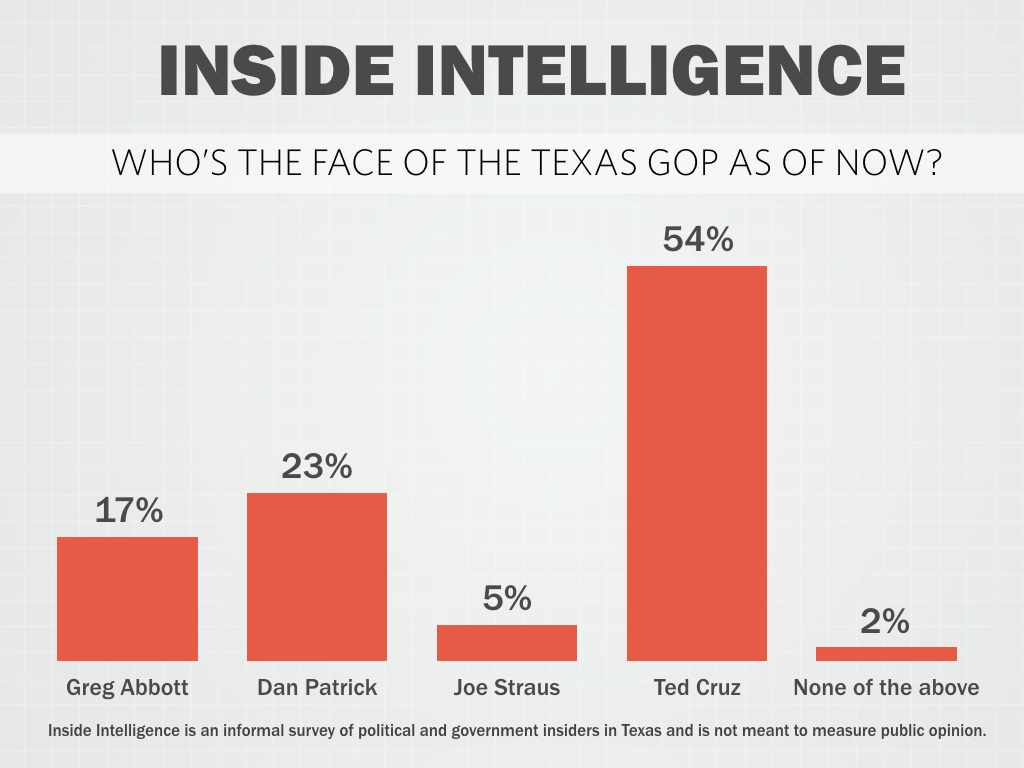 Who’s the face of the Texas GOP as of now?

• "Not a fan of Patrick, but like Bullock, he is clear about what he is for or against. Abbott panders, Cruz misrepresents and Straus tries to govern."

• "And Cruz will reach 110% name ID by March 1. Even Democrats in Canadian will know he was born in Canada!"

• "Patrick is still owning the show. It will be harder for him in the next session as the fiscal situation will be tight. Look to Joe to win out in the next session, though he may never be 'the face' of the GOP in the public sense."

• "For those of us in and around the Capitol, Dan Patrick is at the head of the train. For most Texans outside of Austin, I think Greg Abbott was the face of the Texas Republican party up until six months ago but now I imagine that it's Ted Cruz. Around the nation, I expect that Ted Cruz is first on the marquee."

• "Greg has to watch out because Patrick wants his job and he is working to be the face of the GOP. I guess that is why the Gov's fundraising machine never let off the gas pedal after the election."