For this week’s nonscientific survey of insiders in government and politics, we asked first about whether Speaker Joe Straus can breathe easy about his chances to win a fifth term as the House's presiding officer.

With several of Straus' allies choosing not to run for re-election and another couple of key lieutenants facing primary challenges, some of Straus' enemies see an opportunity to topple the Speaker.

The insiders, though, see things differently. Fully 90 percent see Straus as either definitely or probably breathing easy about his chances to hold on to the Speaker's gavel.

The next question tested the conventional wisdom that Democratic turnout spikes in presidential years, leading to net gains in the Legislature. Nearly three-fifths of the insiders predict that Democrats will gain one to three seats in the Texas House.

Another 27 percent see Democrats either not gaining any seats or losing seats to their Republican counterparts. But 14 percent predict a net gain of four to six seats for Democrats and one person ventures that the Democrats will gain seven to nine seats overall.

Several primary contests could become costly, based on the particulars of the race. For instance, the Senate District 26 Democratic contest could become another proxy war between tort reformers and trial lawyers. The GOP primary in Senate District 24, meanwhile, has attracted multiple candidates, some of whom will attract establishment support and others who will attract Tea Party support.

And there are potentially explosive House GOP primaries pitting an establishment incumbent against a Tea Party challenger and vice versa.

Nearly half the insiders believe the SD-26 primary in San Antonio between José Menéndez and Trey Martinez Fischer will end up being the most expensive non-presidential primary contest while about a quarter think the SD-24 primary will be the most expensive. Another 16 percent name the HD-8 contest between Byron Cook and Thomas McNutt.

We finished this final Inside Intelligence of the year by asking the insiders for their pick for the surprise contest of the primary cycle. We received many perceptive choices there and those responses are well worth checking out. 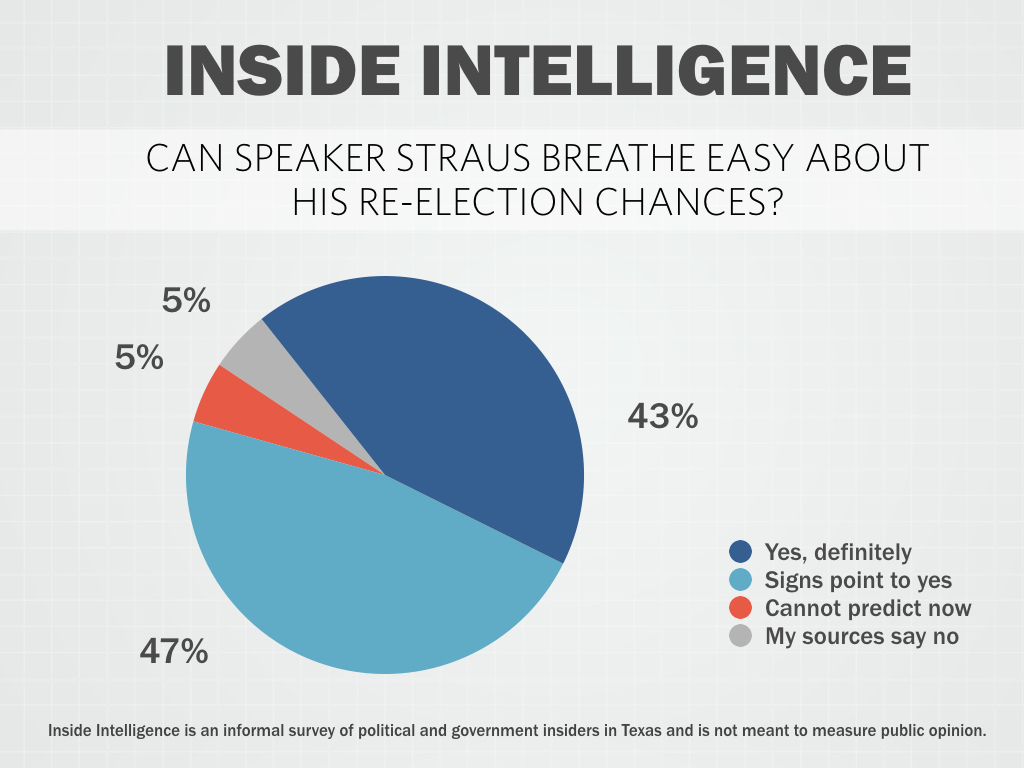 Looking at the list of House primary challengers, can Speaker Joe Straus breathe easy today about his re-election chances?

• "He won't breathe easy, but I'll cover 5-to-1 bets today that he's re-elected Speaker next session."

• "As long as right wing Republicans continue to eat their own, he can be elected Speaker."

• "Not only Straus, but all of his lieutenants should be endangered species on the ballots."

• "Bigger threat is him surviving a primary runoff." 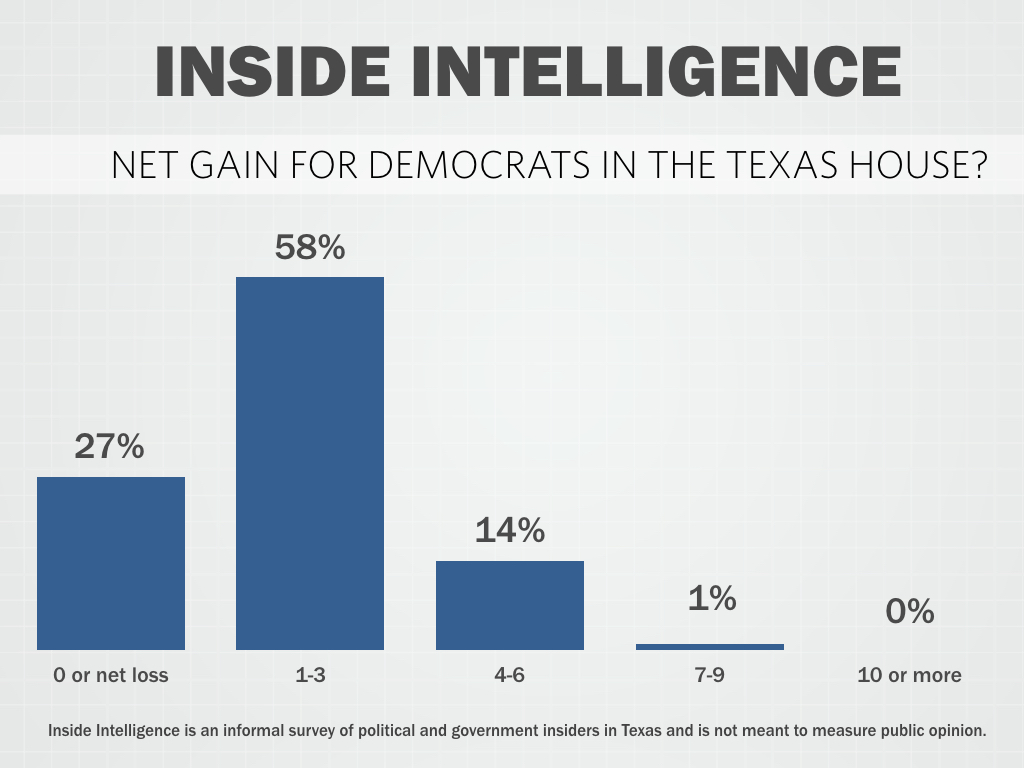 What's the net gain in the House for Democrats in the general election?

• "Presidential cycles are always better for Democrats. There are at least three seats that Republicans hold now that we won't hold next session. Some of our Republicans in most competitive GE districts having to fend of challenges from Empower Texans won't help the others. The Republican will get beat up in the primary, making what is usually a close November election more difficult for the Republican to win."

• "Any gain is assuming a lot about Democrats' ability to do anything correct, but assuming that we can, the extremities to which R's have taken themselves present meaningful opportunities in at least nine districts. Surely we can bat .500... surely."

• "So what, it's like a midget putting on high heels. You asked the wrong question. A more meaningful question would be, will the R's be over 100? That answer is, probably not."

• "The Ds have lost their energy. And I don't see Hillary getting them stoked up. She's the Jeb of the donkey party."

• "Are they still trying? God bless their hearts." 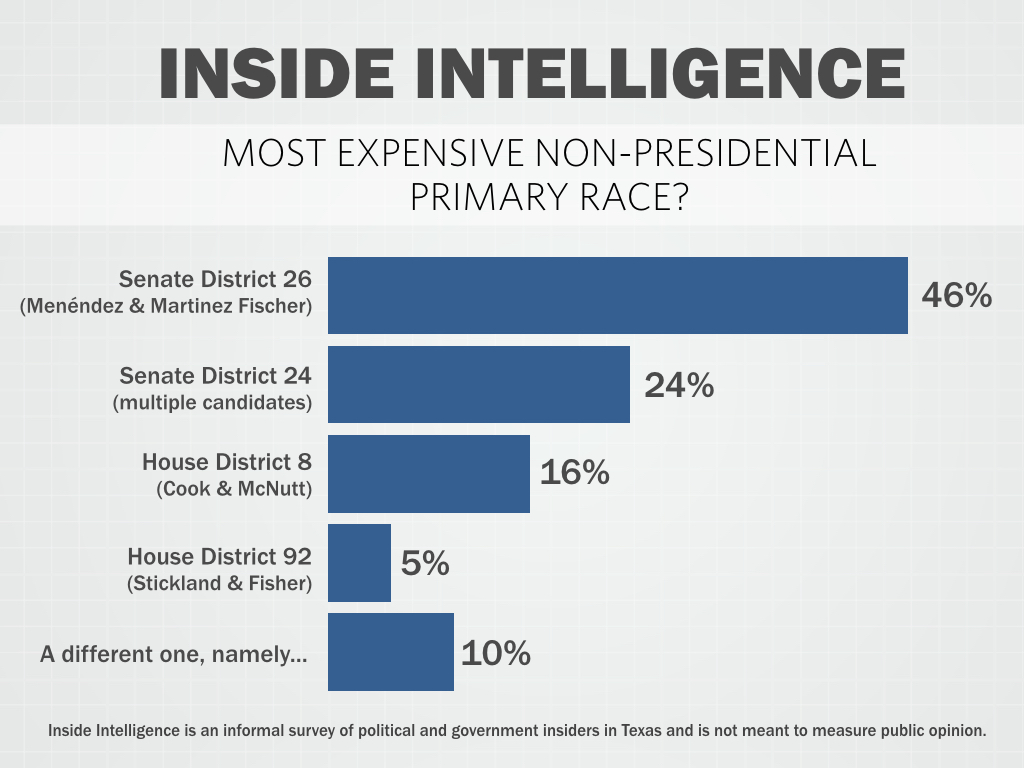 What's your pick for most expensive non-presidential primary race in terms of direct and independent expenditures?

• "Will Hurd now has a primary challenger in addition to a rematch with Pete. Look for lots of money to be dropped in this race."

• "Cook will be able to raise a lot of money and McNutt has personal resources he can use."

• "SD 24 will go into a runoff, and I'm sure a lot of money is going into a pretty safe Republican seat, but will it go to the right-leaning Tea party candidate or the more moderate, GOP-backed one?"

What's your pick for the primary race with the biggest potential to surprise the Texas political world?

• "Harris County Republican Party where Hispanic social conservative lawyer upends incumbent Paul Simpson. This will be a significant move forward toward expanding a Hispanic presence in the party."

• "RRC. It appears the industry is in for their second non-hand picked member regardless of who is elected."

• "Stickland losing handily. He wouldn't have flirted with RRC unless he knows he is going to be a loser back home. Maybe he thought his sugar daddy would pay him more."

• "Gene Green's probable loss. If one can call that a surprise. It might more correctly be termed 'an expectation overdue since 1992.'"