For this week’s nonscientific survey of insiders in government and politics, we asked about differing approaches taken by Texas' Big Three to sanctuary cities.

In recent days, Gov. Greg Abbott has been using both the bully pulpit and his authority over grants administered out of his office to pressure local officials to cooperate fully with federal immigration officials. He also has suggested that he'd like to see more conservative lawmakers elected to ensure the passage of sanctuary cities legislation next session.

Lt. Gov. Dan Patrick, meanwhile, signaled that he'd be willing to fast track sanctuary cities legislation in a hypothetical special session. Some in the conservative grassroots have been urging Abbott to call such a session, something that the governor has indicated will not happen.

Speaker Joe Straus for his part has responded to the increased talk about sanctuary cities by emphasizing the need to study the issue ahead of the 2017 regular legislative session.

The insiders split relatively evenly between Straus (48 percent) and Abbott (44 percent) on whose approach will prove most likely to succeed with just 8 percent favoring the chances of Patrick's plan. But when it comes to reading the voters, the insiders said Patrick (36 percent) and Straus (35 percent) have the upper hand with 29 percent saying Abbott is taking the right approach.

On the thornier question of how this debate plays out among Hispanic voters, three in five of the insiders said it repelled Hispanic voters while 9 percent said it attracted them. Fully 30 percent, though, would use different terms to describe the issue's effects.

Finally, the insiders were nearly unanimous in thinking that Abbott doesn't call a special session on sanctuary cities. 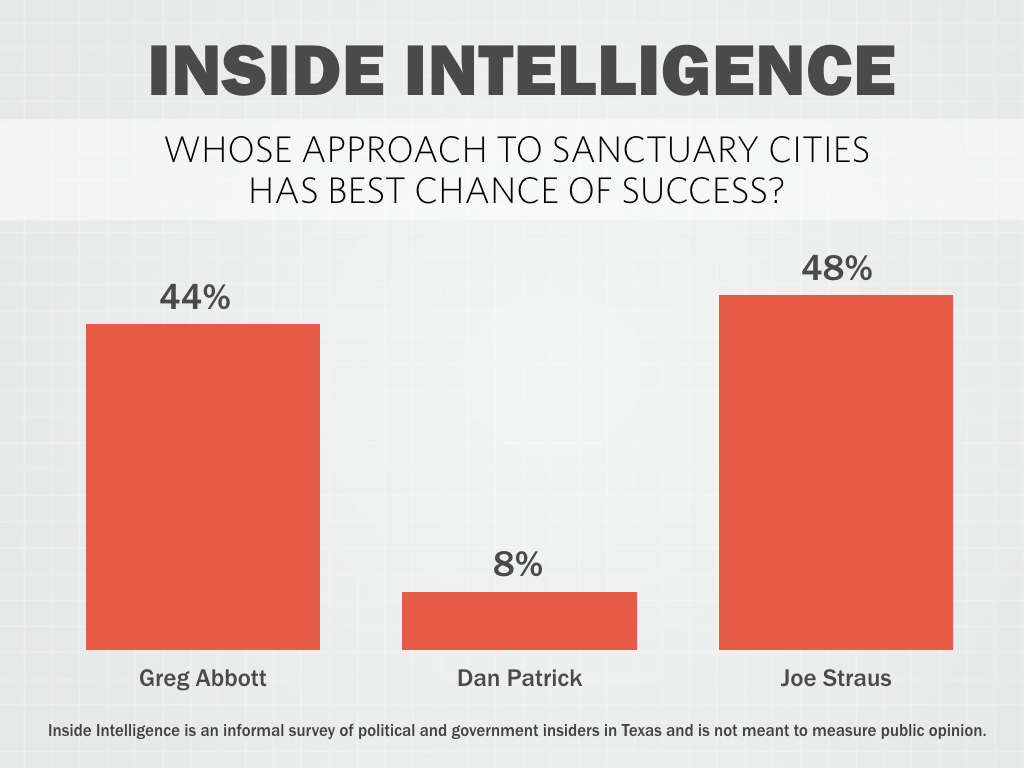 Whose approach to sanctuary cities has the best chance of success?

• "The voters are sick and tired of being manipulated by politicians — which exactly what this choice does. Fast Track would be the correct approach to motivate voters, but we are left wondering whether they really plan to fix the problem or manipulate the electorate."

• "Straus' measured, thoughtful approach makes the most sense, so therefore it's DOA with the xenophobes and hyper partisans in his party."

• "Since only the Governor can call a special session, his plan is the only plan."

• "I'm not sure what you are defining as success, but whatever it is, I'm betting on Patrick."

• "Abbott's got the right idea: just ride this thing to Republican victories. Actually doing something about it is really messy and may backfire." 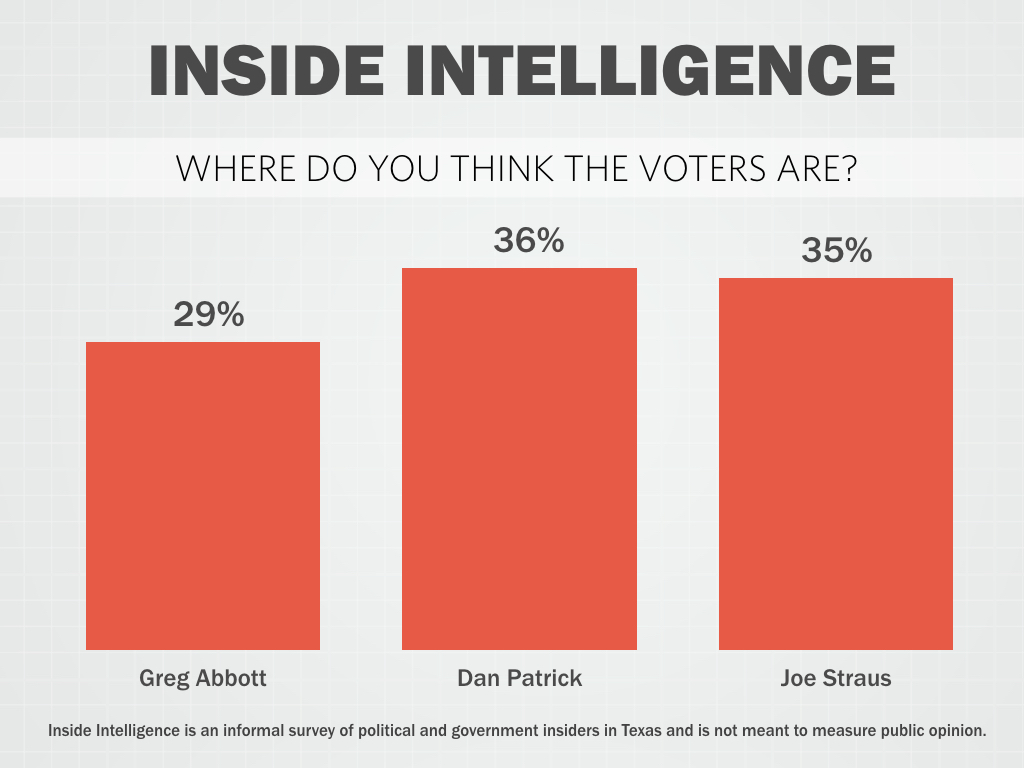 Where do you think the voters are?

• "Which voters — the large, silent majority or the loud, vocal minority?"

• "Answer is Straus for where all voters and population are. Republican primary voters are with Patrick or Abbott."

• "Abbott is the Governor. No one knows who the others are outside of their families."

• "Abbott has ability to make life uncomfortable for sanctuary city advocates, which is sufficient for now."

• "Patrick knows what voters want. He and they aren't likely to get what they want, though." 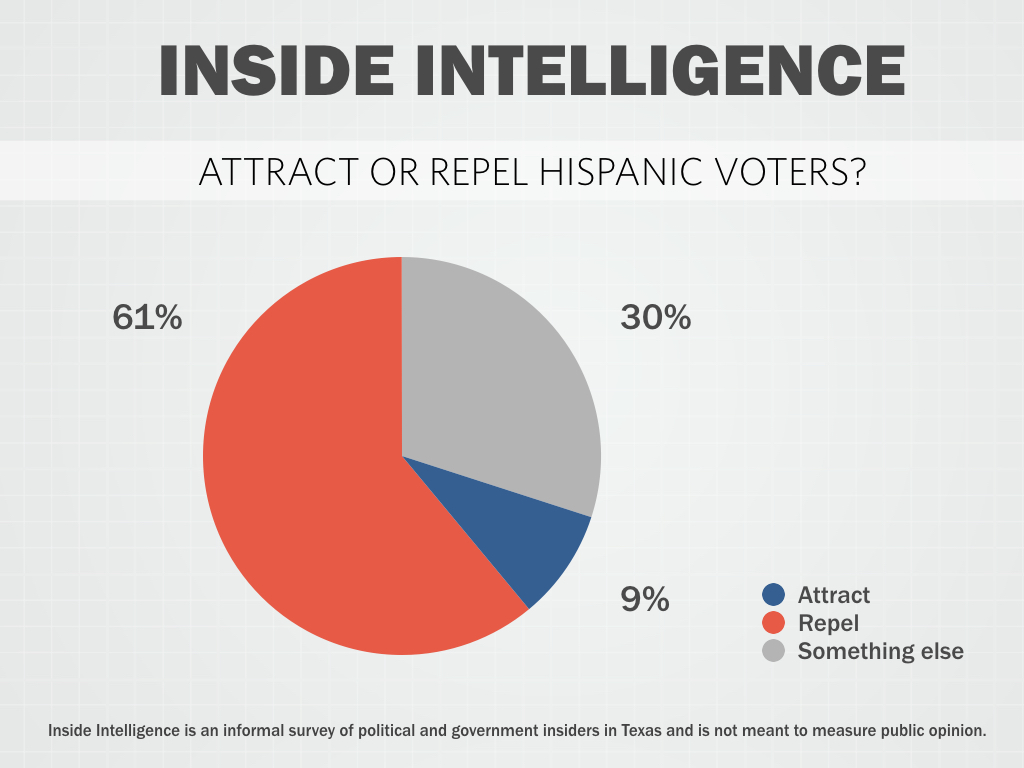 Does this debate attract or repel Hispanic voters?

• "It depends. We forget that the Hispanic voters have a wide range of perspectives. Some come from families who just got to Texas, some from families who have been here since Texas was a part of Spain, and the rest from every generation in between. Some are of Mexican descent, some of Cuban, some..."

• "Let us be clear, some Hispanic voters are absolutely aligned with the Gov./Lt. Gov., however a majority are not. This is not an issue of civil disobedience, but rather a issue of municipalities purposefully, and at times flaunting the fact, of ignoring federal law and they should he held accountable."

• "It has little effect. Most conservative Hispanics — a substantial minority of the Hispanic population — want to see the law enforced."

• "Patrick's election results speak for themselves. A bold stance attracts voters, not repels them. Patrick garnered a strong share of Hispanic votes to prove the point." 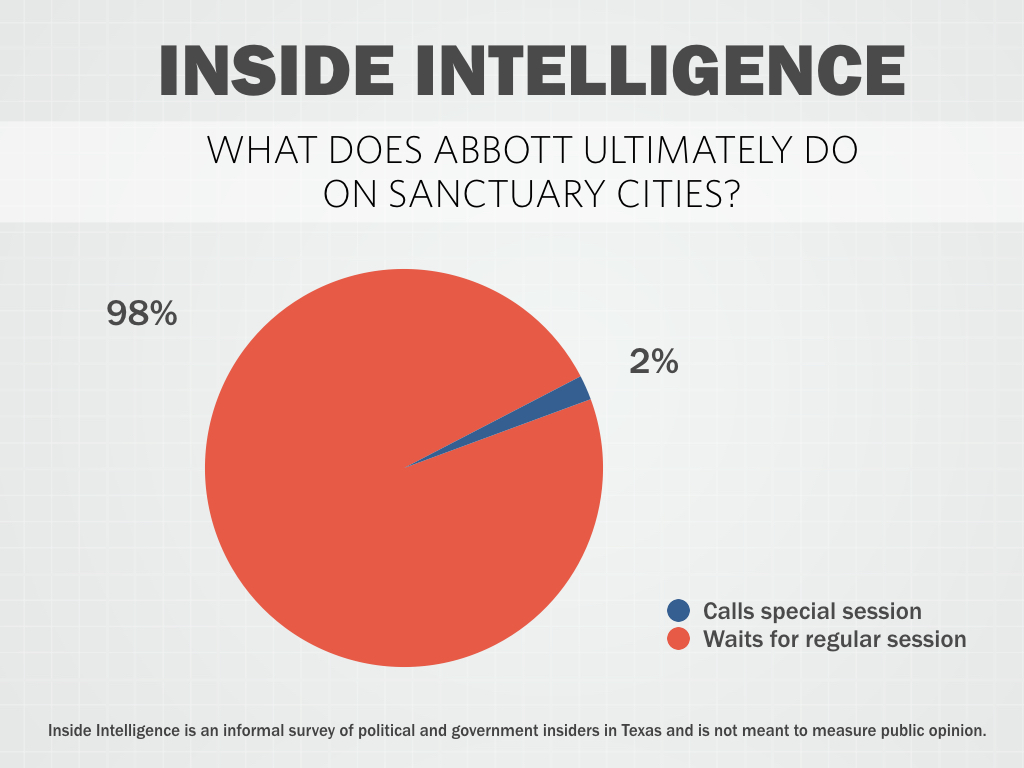 When all is said and done, what does Abbott do on sanctuary cities?

• "Ted Cruz will run on this issue in Texas."

• "Avoid controversy while manipulating voters. That's how to gain poll numbers in keeping with Congress."

• "He only calls a special session if a national newsworthy event takes place in a sanctuary city."

• "Abbott is congenitally incapable of making a decision."

• "No primary to worry about so it's a safe decision."