Decades after Tommy Henderson first asked the federal government to return land in Texas along the Red River that his family had tended since the early days of the Civil War, a funny thing happened: The feds finally obliged.

On the steps of the Clay County courthouse in late July, a U.S. Bureau of Land Management official proudly handed over — with firm handshakes, signatures and all — about 95 acres that the feds had called their own.

“You’ve been waiting a long time for this day, which is the patenting of your land, your private land,” said Steve Tryon, an agency field manager, according to a Texas Farm Bureau video recording of the meeting.

Boy, did Henderson wait. For nearly half his 62 years, his frustrating chapter went unresolved in the squabble-filled history of the Red River, the changing path of which has blurred property lines for at least a century.

The farmer can now do whatever he wants with the pasture he knows so well. He’s happy about that. But dozens of his neighbors are still in limbo amid a larger dispute with the land bureau, the federal government's trustee for millions of acres of public land and minerals. The agency says the feds own thousands of acres along a 116-mile stretch of river, including some that Texans have long considered theirs.

As the agency decides what to do with the land — a process that could take several more years — Texans are still paying local taxes on lands they can't sell and are reluctant to improve.

“Y’all just put a cloud over this land,” Henderson said of the bureau. “Y’all are ruining people’s livelihoods by clouding up this land.”

About 18 months after the confusion first grabbed national headlines and sparked fiery comments from Texas leaders, some Red River residents are wondering whether they should follow Henderson’s lead in reasserting their property rights — by filing a claim under the Color of Title Act, an obscure federal law meant to address these types of issues.

But just like the river itself, that option can prove murky.

Questions have swirled near the river stretch since December 2013, when bureau representatives arrived in North Texas to discuss updates to its resource management plans in Kansas, Oklahoma and Texas — how the land would be used for the next 15 to 20 years.

The area includes about 90,000 acres along the Red River that the agency considers public land, with perhaps a third of it on the Texas side.

The agency says its claim to that land comes from a 1923 U.S. Supreme Court decision — one that delineated the boundaries between Texas and Oklahoma and assigned the feds the patches in between.

But Texans have long managed swaths of that area. They hold deeds to the land and have diligently paid their local taxes. The bureau has not fully surveyed the area, so it is not clear precisely where the public boundary lines intersect with private lands.

The agency plans to finalize the management scheme by 2018 at the earliest, frustrating residents who want a resolution now. 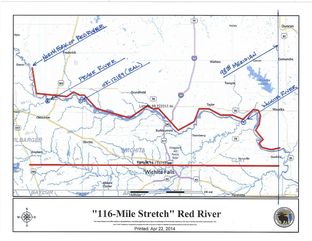 The bureau has not decided whether it will close off parts of the land or make it open to the public. But since few stretches are accessible without crossing onto indisputable private property, the most likely option would involve selling off the land.

The bureaucrats say they understand why Red River dwellers are concerned, but they have a strict responsibility to manage taxpayer resources — in this case, the land.

Meantime, said Paul McGuire, a spokesman, the bureau is encouraging landowners to use the 87-year-old Color of Title Act to secure the property.

That's what Henderson did.

The Clay County farmer has become a point man for those questions about their river land, but his case was unique.

An Oklahoma judge actually took away his 140 acres. In the mid-1980s, the judge handed about 45 acres to an Oklahoman who eyed it from across the water, and decided the rest belonged to the federal government.

(Read more details on Henderson’s case and others in Red River history.)

Around that time, Henderson applied to get the 95 acres back under the Color of Title Act, which Congress enacted to help those who bought public land from unscrupulous sellers passing it off as private.

The law allows citizens to buy back disputed land from the federal government — sometimes for very little — if they can show specific evidence “giving the appearance of having title to public lands,” as the land bureau puts it.

That includes holding the land in “good faith and peaceful, adverse possession” for at least 20 years — while paying state and local taxes or making improvements.

For years, however, Henderson heard nothing about his application. His occasional calls to the agency got him nowhere. By the early 2000s, he had mostly given up.

“I don’t think anybody understands color or title or knew what to do with it.” he said. “There comes a point in time when you feel like you’re beating your head against a wall.”

But the equation changed last year. Texas leaders seized on the border angst amid campaign season, and Henderson’s case finally got attention.

The land bureau found the nearly 30-year-old application and started work on a deal that would hand over the land for roughly $1 per acre, with Henderson being credited for taxes his family paid over the decades.

McGuire said the agency has “no institutional knowledge to know” why it didn’t process the application years earlier.

As its bureaucracy winds, McGuire said, a new staffer at the Oklahoma field office will help the agency handle any influx in applications that are otherwise “extraordinarily rare” in a region with little public land.

So far, McGuire added, Henderson remains the only area landholder to apply, and just a couple of others have sought details. 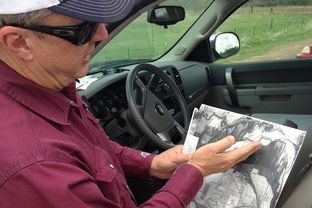 Enlargephoto by: Jim Malewitz
Tommy Henderson shows a survey of land along the Red River in North Texas.

But the process has plenty of drawbacks, perhaps enough to scare away others. Chiefly: a 160-acre limit on claims — many potentially affected landowners own plenty more — and the fact that rights to the minerals below ground don’t transfer with the land. The feds get to keep them.

“It worked for Tommy, and we’re glad that it did. But it won’t work for everyone,” said Gene Hall, a spokesman for the Texas Farm Bureau, which has advocated to for the Red River residents. “We believe that a legislative solution is far better.”

A solution probably won't come from the state.

Though Gov. Greg Abbott fired a new volley at the federal agency this month, demanding — for the third time — that it “cease and desist” its “land grab,” the Republican will not say how he plans to enforce the demands.

And Texas Attorney General Ken Paxton’s office told the Texas Tribune that he is “is concerned with the [Bureau of Land Management's] actions and the continued federal overreach of the Obama Administration” and is “monitoring the situation.” It did not elaborate.

Experts say it doesn’t look like the state has many options beyond complaining in public. Though Paxton and other Republicans seem to relish suing the Obama administration, it’s not clear that Texas could do so in a private property dispute of this kind.

“I don’t know if Texas has the standing,” said Matthew Festa, a professor at the South Texas College of Law.

Their legislation would require surveys of the entire disputed stretch, expand Color-of-Title provisions and prevent any contested lands from being included in the federal resource management plan.

Thornberry’s bill passed out of the House Committee on Natural Resources in September. In a statement, Thornberry vowed “to resolve this issue once and for all.”

Disclosure: The Texas Farm Bureau is a corporate sponsor of The Texas Tribune. A complete list of Texas Tribune donors and sponsors can be viewed here.