On any given day across Texas, truck drivers might crash their vehicles, construction workers tumble from scaffolding or refinery workers inhale nauseating fumes.

But many of their injuries will be documented poorly by employers and insurance companies. Some will go unreported entirely — as if they never happened. As a result, no one really knows how many Texans — or Americans, for that matter — are hurt at work.

What is written down about workplace injuries  — and when it's written — is more than just scorekeeping. Documentation can largely determine whether workers get medical care covered by insurance companies, or fall into whatever social safety net exists, relying on government aid and public programs to recover and support themselves.

Though the federal government typically counts about three million serious work-related injuries each year across the country, that tally represents “undoubtedly only a fraction of the true number,” the federal Occupational Safety and Health Administration said in a report published last March. Fewer than 40 percent of eligible workers even file workers' compensation claims, the agency said.

“Numerous studies provide documentation that many, and perhaps the majority, of work-related injuries are not recorded by employers, and that the actual number of workers injured each year is likely to be far higher” than federal estimates, the report said.

And for some workers, that reporting gap can be the thin line between short-lived pain and months, or years, of struggle.

Isidro Almendarez's hand injury effectively ended his career as a carpenter. The Tribune assembled his story from interviews with Almendarez, his wife, his attorney and a coworker, plus insurance documents and a photo of the injury. (A spokesperson for his employer when he was injured, Austin Commercial, declined to comment.)

After more than two decades working for Austin Commercial, most happily, Almendarez was injured in mid-December 2014. Working on a garage at the Austin-Bergstrom International Airport, his hand went through a concrete wall he was busting up with a hammer and piece of rebar.

At first the injury looked mild, mostly cuts and scrapes. A supervisor refused to send Almendarez, who speaks mostly Spanish, to a clinic or report the injury up the chain of command.

Eventually, the hand developed an infection called cellulitis, swelling up like a balloon. For six weeks, Almendarez kept working and continued to mention the injury at morning safety meetings. Each night, the pain kept him from sleeping, even if he tried to numb it with pills.

Finally, the boss relented and drove him to a nearby clinic, which refused to treat a workplace injury that hadn’t been addressed for more than 30 days, the time limit for workers to report injuries to their employer in the state’s workers' compensation system.

When the supervisor told Almendarez to fib on the paperwork — say the injury happened more recently — the carpenter did that. He just wanted treatment. 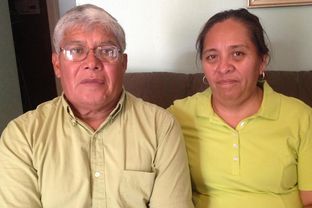 Enlargephoto by: Jim Malewitz
Isidro Almendarez sits next to his wife Irma in their Lockhart home. The former construction worker struggled to make sure his employer documented a hand injury and fought a serious infection as a result.

Shortly after he spent a week in the hospital fighting the infection, the company's insurance carrier said it would not pay benefits, arguing that the carpenter didn’t report the injury in time. In a benefits review conference the next summer, questions over when he reported the injury threatened to derail his claim.

Only after Almendarez hired a lawyer, and got his crew mates to record statements backing up his version of events did the insurer agree to grant his claim. “Everybody knows he got hurt,” said one colleague who worked alongside him for a year.

Most blue-collar workers are afraid to risk their jobs by talking to attorneys about workplace practices, said Gary Rodriguez, who represented Almendarez and was pleasantly surprised the carpenter agreed to step forward in this case.

“If I had not had a recording like that, they would have not rolled over," Rodriguez said. "They would have fought it all the way.”

Almendarez’s hand is permanently damaged, hypersensitive to heat and cold, and hurts if he does manual work for more than an hour or two. The company fired him, he says, because he could no longer do the work.

“Twenty-two years, and for nobody nothing,” he said, sitting in the living room of his small house in Lockhart. His advice to other workers who fall injured: If a supervisor doesn’t help, tell his boss and as many folks who might listen.

In its report to the Legislature last year, the state Division of Workers’ Compensation touted a remarkable statistic: Texas workers are filing far fewer claims than they once did — a 31 percent drop over the past decade.

The report offered many possible explanations for a trend that mirrors other states, including more safety awareness at job sites, stepped up watchdog efforts from state and federal regulators and new, safer technology.

But in one clause of one sentence of its report, the division touched on another factor potentially at play: “the possibility of under-reporting workplace injuries and illnesses.”

Injuries may go undocumented for a number of reasons, experts say: laborers in grueling jobs like trucking or construction may simply fail to notify their supervisors, either out of fear of retaliation or reluctance to miss work and miss a paycheck.

Or, as in Almendarez’s case, employers fail to document what they know.

Whenever a work-related injury or illness costs an employee at least one day of work, state law requires workplaces to send documentation to their insurance carrier. Workers have 30 days to report an injury to their employer.

Attorneys for laborers say they are reluctant to accept any case involving the 30-day rule — particularly those filed weeks or months after the fact, because they quickly devolve into ‘he-said, she-said’ disputes that insurers tend to win.

“From day one, the fight is on,” said Richard Pena, an attorney with offices in Austin and McAllen.

Employees “should always report an injury to their employer,” the Texas Division of Workers’ Compensation advised in a statement to The Texas Tribune.

“In order for the injury to be covered by workers’ compensation, the insurance carrier must have knowledge of the injury,” the division said. “That knowledge typically comes from the employer, but can also come from other sources, such as notice directly from the injured employee, or bills received from treating medical providers.”

And if a worksite or its insurer fails to document a known injury? The division’s only option is to investigate complaints.

Juan Boston, who lives in Humble, north of Houston, is still fighting years after documentation problems partly torpedoed his effort to claim benefits for an injury that left him unable to work.

The 39-year-old spent six years driving and unloading trucks for McLane Foodservice Inc., part of a $44 billion supply chain, until the company fired him after he could no longer do the work. This year, he sold his pickup truck to pay for surgery to repair herniated discs and other damage to his spine.

His story comes from several interviews, medical and insurance records, sworn depositions and other documents associated with his failed battle in front of state regulators and ongoing litigation.

On Feb. 17, 2012, Boston could no longer stand the pain throbbing from his lower back down his left leg. So he told his bosses that someone else would need to deliver the cargo around Houston.

He checked into an emergency room in Kingwood Medical Center, about 10 miles north of Houston, where a doctor diagnosed a sprained and strained back before discharging him, noting that Boston, who had no history of lower back pain, does “a lot of lifting at work.”

After missing two days of work, Boston — whose supervisor described him as dependable — says he told his human resources director about the hospital visit, showing him the medical records and asked if he could visit a company doctor. That director would later recall a lunchtime conversation. But he denied that Boston was formally reporting an injury.

Even though Boston missed work, McLane did not document the injury.

In Boston's mind, his hours spent hoisting 40-plus pound boxes destroyed his back. But the lack of documentation of his early conversations with McLane employees would destroy his chances of getting help.

Boston would ultimately miss three more weeks of work, and take painkillers upon his return. He paid an orthopedic doctor with his personal insurance, but nothing was filed with the company's workers' comp insurance provider until another incident in August.

In that case, a box of taco shells fell on Boston’s head, and the trucker also strained his back trying to free a ramp that was wedged. McLane promptly reported it. New Hampshire Insurance Company, an affiliate of AIG, would agree to cover a "strained" back directly from the minor mishap. It refused to cover the herniated discs (diagnosed following an MRI three months later), which the August incident alone could not have caused.

A designated doctor would agree. The more severe damage had to be pre-existing in the bureaucracy's eyes, no matter how it actually happened. The incomplete records from before made it so.

“His case is just an example of a huge number of cases, which I see, in which the same thing occurs to workers over and over again,” Dr. Stephen Esses, Boston's treating doctor, said in an interview. “One error is there forever. And the injured worker ends up spending 18 to 24 months trying to rectify what occurred in a few seconds.”

Esses supported Boston's claim in front of state regulators, who were unconvinced. He did not "persuasively establish a relationship" between Boston's work and injury, wrote one hearing officer, who also said "more persuasive evidence" showed Boston failed to report his earlier injuries on time.

(Experts say recent Texas Supreme Court rulings have made it particularly difficult to prove the “repetitive trauma” injury Boston was arguing, so his case faced some difficulties beyond reporting problems.)

Though Division of Workers Compensation hearings went against Boston, the division has opened up an investigation of the insurance company's and McLane's actions in the case — potentially examining whether the carrier knew Boston had reported injuries to McLane but did not document it.

Among the documents they might examine, this interoffice in which the insurer referred to Boston's Oct. 2012 emergency room visit:

“The records clearly state [Boston] was reporting a new accident but the insurance carrier did not file a First Report of Injury on his behalf,” the document said.

“AIG is obligated to follow and strictly adheres to Texas workers’ compensation laws,” the insurer said in a statement. “We base decisions regarding medical necessity of treatment and compensation on these laws and the facts of individual cases.”

As a last-ditch option, Boston — who is slowly recovering from his surgery and walks with a limp— has turned to Texas courts in hoping to nab some benefits.

“I don’t know what else to say,” he said in an interview. “It’s like, all this overwhelming evidence, and I’m still a liar.”

Neena Satija contributed to the report.