Editor's note: This story has been updated to include a response from DPS.

Capitol officials say a car fire this afternoon on the south side of the building is being investigated by authorities as intentionally set.

The officials, who declined to be named because they weren't authorized to speak on the issue, say authorities suspect the fire was set by someone whom they ran out of the building earlier in the day after the individual was seen poking around the speaker's offices and apartment.

The Department of Public Safety confirmed on Friday night that it is conducting an arson investigation in conjunction with the State Fire Marshal's Office.

"At approximately 2 p.m., emergency officials received reports of a vehicle on fire near the capitol, and DPS troopers and the Austin Fire Department responded and extinguished the flames," according to a DPS press release.

A DPS spokeswoman said authorities are "aware of and looking into a separate report by legislative staff earlier in the day regarding suspicious activity by a visitor at the capitol. DPS is working to determine if there is a connection between that incident and the vehicle fire." 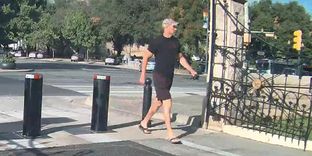 Enlargephoto by: Texas Department of Public Safety
"The State Fire Marshal’s Office is processing the scene and gathering evidence to determine the exact origin of the fire. DPS is seeking the public’s assistance in gathering information about a person of interest related to this incident - see attached photograph."