A bronze-and-granite monument celebrating more than 400 years of achievements by African-Americans in Texas should be installed outside the Texas Capitol next year, after lawmakers included $1.5 million to complete its construction in the state's $209 billion budget, supporters confirmed this week.

“It’s a grand piece, but it's eloquent and powerful, and it’s a piece that I think everyone will be proud to see it on the Capitol grounds,” said state Rep. Sylvester Turner, D-Houston. As one of the House’s chief negotiators on the budget, Turner was able to insert the rider authorizing funding into the State Preservation Board’s budget in the last weeks of the session.

The surprise funding provides the latest twist in an effort by several lawmakers going back more than 20 years to construct a monument to African-Americans on a “Capitol grounds littered with monuments to the Confederacy,” said state Sen. Rodney Ellis, D-Houston, who began working on the issue in 1993.

The original plan was to build a statue commemorating June 19, 1865, known as Juneteenth, when federal troops arrived in Texas to declare slaves free. Texas lawmakers approved a bill to establish a Juneteenth monument in 1999. But the resulting monument quickly drew criticism, largely because one of the statues bore a striking resemblance to former state Rep. Al Edwards, D-Houston, who had helped pass the original law. Some historical inaccuracies were also discovered. With more than $1 million in taxpayer money already spent, the Legislature scrapped the project in 2012 and opted to replace it with one that more broadly honors African-Americans.

“We decided we wanted something that would tell more of a complete history of the African-American contributions,” Turner said. He and other like-minded lawmakers said they were intent that anyone who visited the monument would be moved by the story it told.

Denver-based sculptor Ed Dwight, who has dozens of public sculptures around the country, including one honoring African-American history in front of the South Carolina statehouse, proposed a sweeping 30-foot-long two-sided panorama. One side would serve as a timeline, with the story beginning on the left in the 1500s with Estevanico, a personal servant to Spanish conquistadors who is believed to be the first African in Texas, and end on the right with an astronaut.

At its tallest central point, the panorama would celebrate the moment slaves were emancipated in Texas, with a man holding a torch and a woman clutching the Emancipation Proclamation. The backside of the monument would include homages to Texas’ natural resources, including cattle, cotton and oil, to recognize African-Americans’ contributions in nurturing those industries. Lawmakers involved in the project loved it. 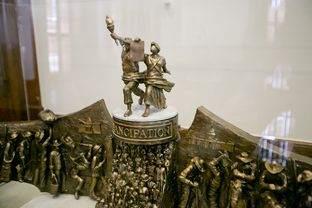 Enlargephoto by: Marjorie Kamys Cotera
A model of the monument honoring African-Americans in Texas

“It’s the first memorial in which I’ve done the story on two sides because of all the history associated with Texas,” Dwight said. “It’s kind of a remarkable story and there really wasn’t even enough room to put the whole story in.”

The panorama will be placed near the main entrance to the Capitol's south grounds, close to 11th Street.

Since 2011, the Texas African American History Memorial Foundation has raised about $750,000 toward the monument’s $2.6 million price tag, according to Austin lawyer Bill Jones, one of the foundation's founders. In the meantime, Dwight said he’s used some of his own funds to keep the project alive.

Turner said he did not receive much pushback from other lawmakers in his efforts to get the rider in the budget. Most who asked about it wanted to make sure the money would be enough to complete the project after so many years in development.

“Contrary to what a lot of people believe, this is not just for the African-Americans in Texas,” Jones said. “This is for every Texan. For everyone who wants to know about Texas and its history, this will visually provide a proper place for the inclusion of African-Americans and their role in the formation of this state.”

“It’s amazing to see the figures on the monument come to life,” he said.