After police arrested three protesters trying to block the path of workers, Colorado-based Vantage Energy, a natural gas driller, officially revved up its fracking operations on a pad site on the western outskirts of town. That effectively ended the brief but intense life of an ordinance that Denton officials say they can no longer enforce due to a new Texas law — House Bill 40 — passed in response that pre-empts local control over a wide range of oil and gas activities.

"Since the ban on hydraulic fracturing took effect in 2014, we have maintained regular dialogue with Denton City officials, presented path forward alternatives and last week followed the city's guidelines in communicating our plans to resume work on June 1st," Seth Urruty, the company's vice president of development, said in a prepared statement. "We work hard to be a good neighbor in the communities where we work and Denton is no exception."

Activists and city officials said they aren't precisely sure what’s next for the city of roughly 123,000, but agreed that its anti-fracking push — and the Legislature’s swift move to quash it — have fundamentally changed attitudes, stirring outrage and a conversation that could last for years.

“What they did with HB 40 is raising awareness, and it’s giving people a voice,” said Cathy McMullen, who spearheaded Denton’s push against fracking, the practice of blasting apart underground shale to bolster oil and gas production.

McMullen, a home health nurse, said she has fielded messages from angry residents of drilling towns across Texas, and is in some ways “grateful” that the Legislature enacted such a far-reaching law. “This is a unifying thing for communities.”

Denton will weigh its next step Tuesday evening when its City Council takes up a measure that would remove the fracking ban from its books — a debate that’s sure to turn emotional.

“It’s a big deal when you invalidate a vote,” said Mayor Chris Watts. “I think we expected something like that, and we knew fracking would begin. But this is just another step, another stage in the journey.”

The ban's proponents called it a last-ditch effort to address noise and toxic fumes that spew from wells just beyond their backyards, saying loopholes and previous zoning decisions rendered changes to the city’s drilling ordinance unenforceable.

Opponents – including most Texas regulators and lawmakers – say the policy effectively halted all drilling inside Denton, keeping mineral owners from using their property. 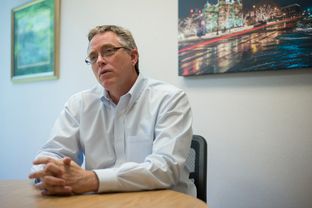 Enlargephoto by: Cooper Neill
In his City Hall office, Denton Mayor Chris Watts talks about what’s next for Denton, after the Texas Legislature overturned its ban on hydraulic fracturing.

The Texas Oil and Gas Association — the state’s largest petroleum group — and the Texas General Land Office each filed suits against Denton just hours after the votes were tallied, calling the ban unconstitutional. (Parties in those disputes both say they are now negotiating a resolution, but have not released a timeline. Whether the city formally drops its ban will affect the outcome.)

And in May, Gov. Greg Abbott signed HB 40 into law, saying Texas needed to avoid a “patchwork of local regulations” that threaten oil and gas production and private property rights.

Energy companies and industry groups support the law, whose preamble states that the act “expressly pre-empts regulation of oil and gas operations by municipalities and other political subdivisions.”

“The whole process in Denton certainly shined a light on the whole dilemma and started the process of people thinking about, how clear is the law,” Todd Staples, former agriculture commissioner and current president of the oil and gas association, said in an interview, calling the law a “balanced approach to regulation.”

“This is not an environment where everybody gets what they want,” he added.

The new law lists some areas cities can still regulate, including fire and emergency response, traffic, lights and noise — but only if such rules are “commercially reasonable.” The language also allows cities to enact some setbacks between drilling sites and certain buildings, but critics call the language vague and likely to trigger more litigation.

“It has provided some line of clarity, but in other ways it hasn’t addressed the root problem, which I think poses a high risk of continued litigation,” Watts told The Texas Tribune.

Though fracking’s resumption seemed to bring Denton full circle on Monday, Watts said that he had no regrets about defending the ban in court and before the Legislature – even if it cost the city some $220,000 in legal fees alone.

Not all Dentonites agreed.

“Minerals in Texas were never meant to be voted on, and they take precedence over surface,” said Bobby Jones, who owns mineral rights on 82 acres of land in town and was the local face of the industry’s campaign against the fracking ban last year. “I think it’s back where it used to be."

Though Vantage resumed fracking on Monday, it did so a bit later than planned. That’s because three residents – flanked by a sign displaying the language of Denton’s fracking ordinance and cheered on by a gaggle of fellow activists nearby – blocked the entrance to the company’s pad site on Nail Road for about hour, keeping some trucks from entering.

Adam Briggle, a North Texas University philosophy professor who was among those booked, said state lawmakers were “sowing the seeds of their own undoing” by overturning the local ban.

Disclosure: The Texas General Land Office was a corporate sponsor of The Texas Tribune in 2011. A complete list of Tribune donors and sponsors can be viewed here.