For this week’s nonscientific survey of insiders in government and politics, we asked about the fallout from the Jade Helm 15 controversy and who among the leadership is having the best session.

On the latter question, the insiders had a clear winner — Speaker Joe Straus. Three in four insiders said the leader of the House is having the best session. Lt. Gov. Dan Patrick and Gov. Greg Abbott, meanwhile, trailed the "none of the above" option, which was offered by 12 percent of the insiders. Patrick and Abbott were at 6 percent and 5 percent, respectively.

The next pair of questions concerned Abbott's decision to wade into the controversy over the planned Jade Helm military exercise this summer in Texas. The insiders weren't happy with the bone thrown by the governor to the conspiracy theorists. (Abbott, for his part, contends he was just acting as "a communication facilitator" between the opposing camps.) About two-thirds of the insiders thought Abbott's action both hurt his and the state's image.

And with Patrick deciding to help along a "religious freedom" bill by suspending rules to give it a committee hearing, we asked if this meant the odds are now more favorable for its passage.

No, said three in five of the insiders. 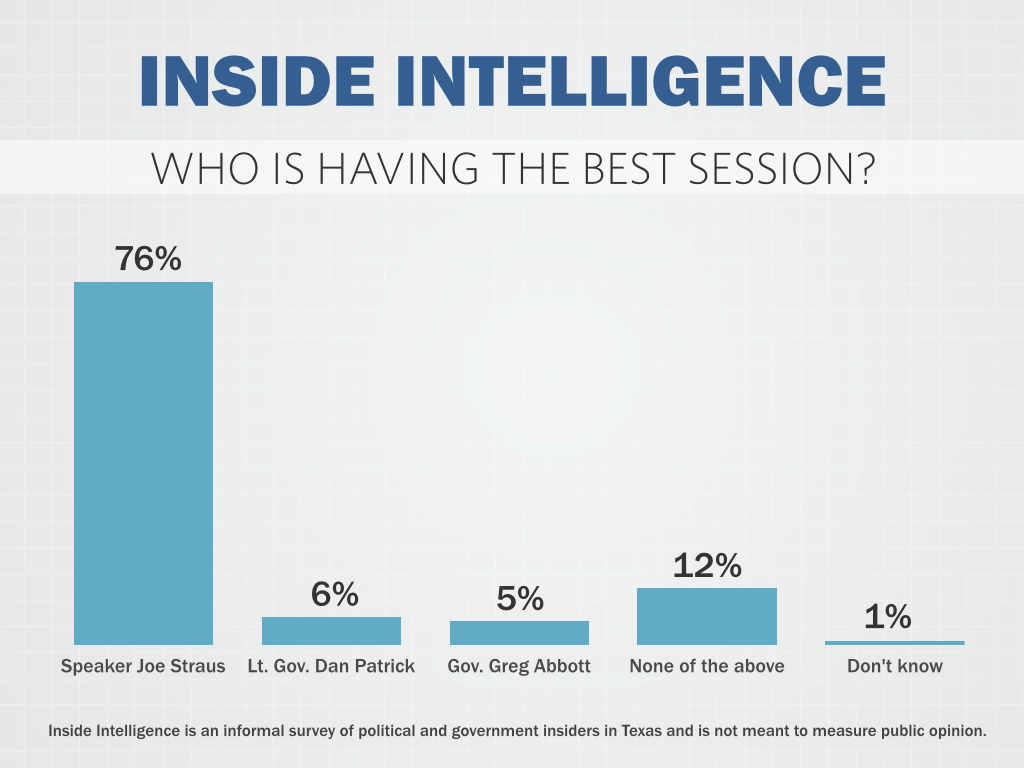 Who is having the best session?

• "Straus is killing it. Patrick overreached and now has to figure out what to do. Abbott needs to avoid those self-inflicted wounds."

• "I think legislatively it's gotta be Abbott — pre-K is moving, open carry is moving, and his ethics stuff is moving, too, whereas Patrick and Straus are thumping chests about taxes."

• "If the plan was to be completely uncoordinated, they are all doing great."

• "Straus is the master now. He's enjoying it a little too much, but Straus is as on top of his game as I've ever seen any Speaker." 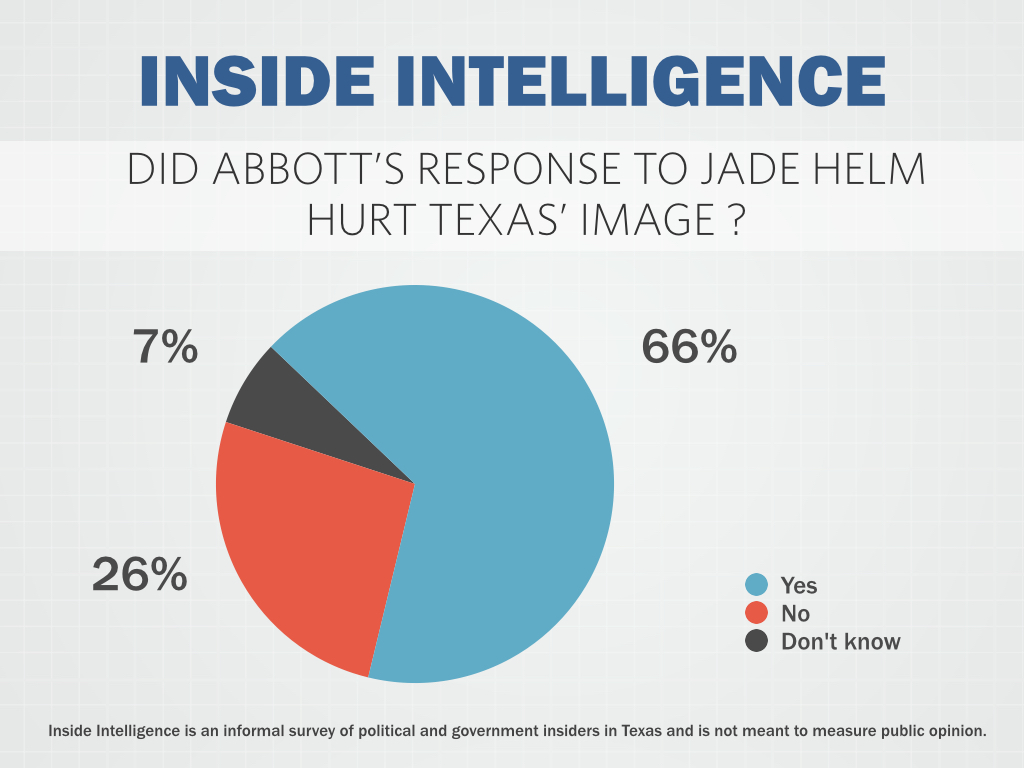 Did Abbott’s reaction to the Jade Helm military exercise hurt the state’s image?

• "It was a bush-league move that made him look weak. The Patrick threat is real."

• "Ridiculous pandering. So disappointing from a governor who, up to this point, was making Texans forget about his predecessor."

• "I can't tell you how many out-of-state friends sent links to stories about the Bastrop meeting, then about Abbott's reaction."

• "As usual with the current statewide officeholders, Texas looks foolish. But it's great fodder for comics!" 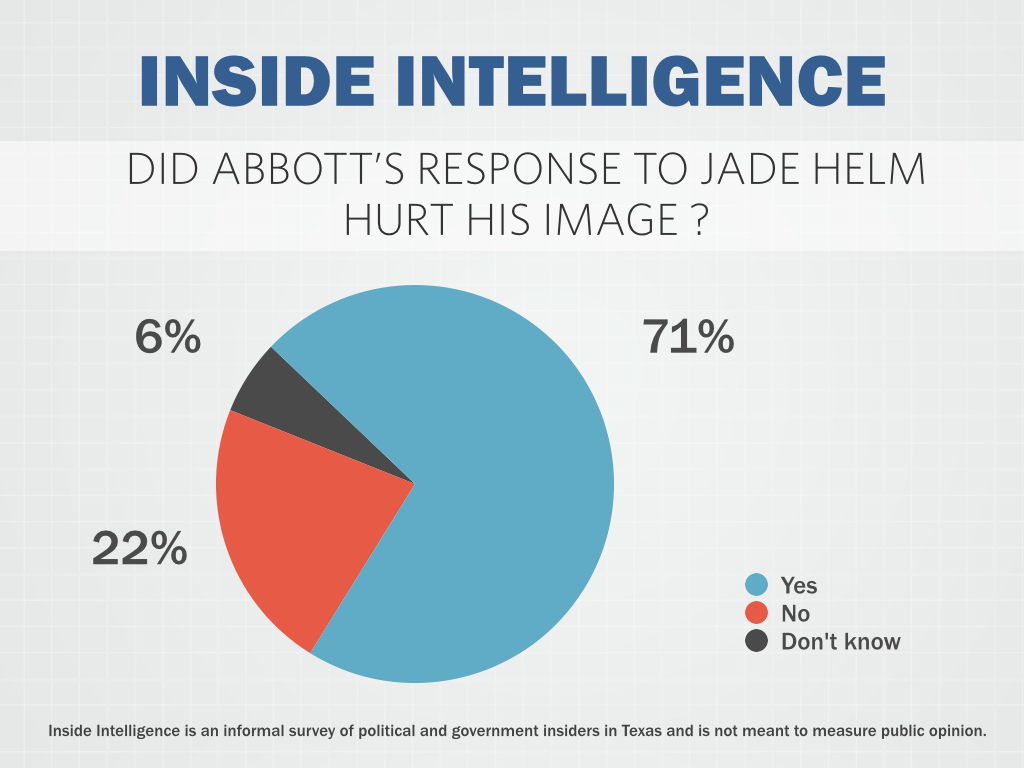 Did it hurt his image?

• "How can a former Texas Supreme Court Justice and former Attorney General take Alex Jones and his ilk seriously?"

• "The country club Republicans are feeling like wo/men with no country."

• "Maybe, temporarily. But we need to give him a break. As long as Mrs. Dan Patrick is measuring for drapes in the Gov's mansion, Abbott is going to have to get a little goofy."

• "Not with those who are already planning to vote in the next 2 Republican primaries. Elsewhere, it doesn't help." 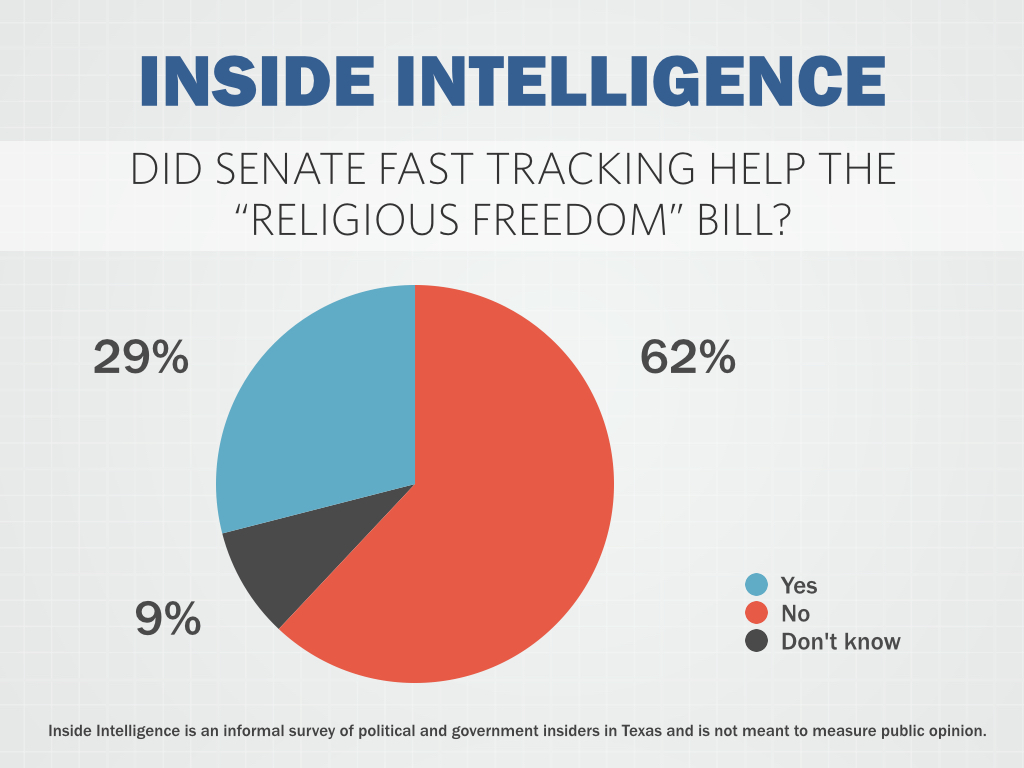 Did fast-tracking a “religious freedom” bill in the Senate last week improve its chances in the Legislature?

• "I wish we'd just focus on issues that really matter to the state, like the budget, infrastructure, and education."

• "With roughly a month left, isn't *everything* on a fast track (to death or passage)?"

• "As long as Straus is Speaker, the Legislature will be mostly ineffective for good bills, yet very good at passing BAD bills."

• "Last gasp at throwing red meat to far right. I am a Republican all the way, but this is silly."