As Republican state lawmakers move forward with legislation that would make it easier for Texans to carry guns openly, and in more places, they risk alienating black and Hispanic Texans who oppose looser gun laws at higher rates than whites.

Roughly half of Hispanics and blacks support stricter gun control laws, compared with 29 percent of whites, according to a February poll by the University of Texas/Texas Tribune. For some, the GOP’s allegiance to the gun measures highlights Republicans’ ongoing challenge to balance the priorities of the party's far-right faction with its outreach to minority voters.

“Who are they concerned about being protected from? The same people who live in my district,” said state Rep. Garnet Coleman, a black Democrat from Houston. Open carry and campus carry are not priorities for his constituents, Coleman said, and are mostly aimed at Republican primary voters. “This has to do with winning elections. This was never done for any reason than to create fear to win elections.”

Half of Hispanics approve of existing concealed carry requirements, while roughly a quarter think Texans should never be allowed to carry a handgun in a public place, openly or concealed, according to the poll. Only a third of blacks support the current concealed carry law, with 45 percent opposing any carrying of handguns in public places. When it comes to allowing concealed weapons to be carried on college campuses, half of blacks and 39 percent of Hispanics strongly oppose the measure, compared with 26 percent of whites. 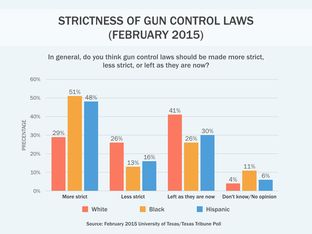 Senate Democrats — most of whom are Hispanic or black — have vocally opposed the gun measures, citing safety concerns in urban areas, the number of police chiefs opposed to the measures and impact on businesses. Both bills passed the Senate along party lines, with all 11 Democrats voting against them.

State Rep. James White, one of two black Republicans in the Legislature, said the right to bear arms goes beyond party or racial lines, saying the support he's seen among constituents for the measures is rooted in constitutional rights.

“Texas blacks especially — but American blacks in general — they are the exemplar of what a free society can do,” said White, who represents a deep East Texas district.

Nationwide, blacks and Hispanics are less likely than whites to have guns in their households, according to the Pew Research Center.

The numbers are murky in Texas, but some advocates point to minorities' low participation rates among concealed handgun license holders as proof of their disinterest.

Last year, only 7 percent of the 246,326 people who received an application for a concealed handgun license were black, according to the Texas Department of Public Safety. Blacks make up 12 percent of the state's population.

The department does not collect application data by ethnicity, so Hispanics are included in the 85 percent of white, multiracial or other Texans who received license applications. A county breakdown shows only a tiny fraction of the population in the predominantly Hispanic Rio Grande Valley requested concealed handgun license applications.

“You can see it play it out in who are CHL holders,” said Jonathan Panzer, executive director of Texas Gun Sense, which opposes the two gun measures before the Legislature. “Not only do they not like it, but they don’t even practice the rights of this.”

“Our general outreach is blind to gender, race or ethnicity,” said Alice Tripp, a lobbyist for the state organization.

Despite Republicans’ fervor to pass the two gun measures, Victoria DeFrancesco Soto, a public affairs and political science professor at the University of Texas at Austin, said gun rights are not a big enough issue among Hispanics and blacks to help the GOP win over new supporters from these two groups.

“I don’t see it as being a touch point for the GOP and Latinos. I think they have bigger fish to fry, mainly immigration,” DeFrancesco Soto said, adding that crime prevention may be a higher priority for blacks but loosening gun laws doesn’t resonate with them as much as with conservative Texans. “It’s sexy for legislators this session but ... the general population, they don’t feel as passionate about it as the lawmakers.”

“It appears we would have a natural concern about more guns on the streets just because so many African-Americans meet their demise with gun violence,” Robinson said. Blacks are twice as likely as whites to be the victims of gun homicide.

“Guns are not our favorable priorities,” Robinson said. “They’re seen as more of a nuisance.”

As the state’s Hispanic population continues to grow and spread, some Republicans say gun control issues highlight the increasing diversity in a large state where opinions are often driven by geography.

George Antuna, co-founder of Hispanic Republicans of Texas, said gun laws are an issue on which Latinos should not be grouped into a large voting bloc.

Antuna said his organization has found that Latinos living in rural areas of the state “embrace” their Second Amendment rights while urban Latinos “don’t approve as much,” often because that’s where immigrants tend to settle.

“They come from countries that don’t necessarily embrace gun rights like we do in the U.S.,” Antuna said. “It goes back to the roots and goes back to the way they were reared and what they hear at the kitchen table from other countries.”