Dilapidated parks. Walls patched with toilet paper. Rodent urine leaking into the ceiling at a state school for deaf and disabled kids. Decades-old computer and technology systems. A backlog of pipeline safety inspections. Consumers getting “screwed” at the gas pump for lack of fraud investigators.

The signs of wear and tear in state government seem to be cropping up everywhere.

It didn’t happen overnight. The deterioration in state parks, hit by a series of budget cuts and outright raids on its supposedly dedicated funding by lawmakers, has been a running plot line in the papers for several years.

Likewise, the deferred maintenance at state buildings, which could cost almost $1 billion assuming the work begins now, dates backs a generation in some cases.

But with a new crop of leaders taking the reins at state agencies, stories of neglect and bureaucratic woe are spilling out into the open more than ever — in testimony before the Legislature, interviews with the media and dry agency reports.

Newly elected Comptroller Glenn Hegar has seen it firsthand. In his earliest days on the job, he learned that a hole in the bathroom wall at the Lyndon B. Johnson building had to be patched with toilet paper. He found out a female employee had to get rabies shots not long ago after coming into contact with one of the numerous bats flying in the building. And he discovered the real purpose of a quilt on the wall of an employee’s office.

“I thought it was decoration, but, no, that’s to muffle the sound of the bathroom behind her wall, so you can’t hear people that are on the toilet,” Hegar told The Texas Tribune on Friday.

The maintenance problems are not confined to the comptroller’s office.

“We have leaking roofs that have caused damage to servers. We have elevators that don’t work,” Attorney General Ken Paxton, who recently took over the top state attorney job from Gov. Greg Abbott, testified recently. “I’ve been surprised at some of the issues that we’ve already had to deal with.”

Nowhere is the deferred maintenance more dramatic than at the Texas School for the Deaf. Its fire safety problems got so bad last year that the state fire marshal's office threatened to shut down the historic South Austin school. To keep it open, the Texas Facilities Commission agreed to patrol parts of the campus 24 hours a day to ensure buildings don’t go up in flames — a sort of human fire alarm system to replace a mechanical one that doesn’t work in a wide swath of the campus.

"We didn't see that as a necessity," Peter Maass, a deputy at the Texas Facilities Commission, said of the fire checks. "[But] we said, okay, we're not going to argue." 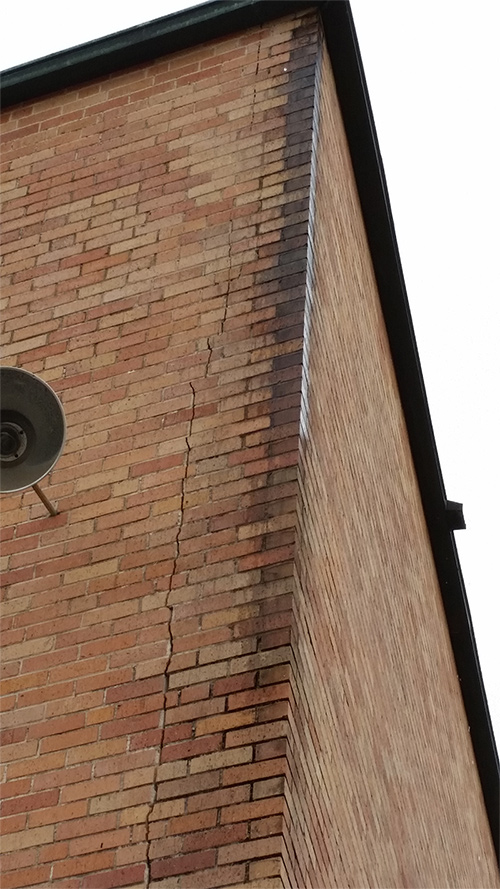 Enlarge Obtained by The Texas Tribune
A cracked wall at an auditorium on the Texas School for the Deaf campus in Austin.

Last year, after responding to a complaint about wet ceiling tiles in one building, the agency went out to investigate and found rodents on top of and underneath the building — "some alive, some dead," Maass recalled. There were raccoon, squirrel and possum carcasses in the crawlspace, along with rats and rat feces. The cost of extermination: $18,000.

Underneath one dorm, "unknown quantities of contaminated soils will need to be removed," the report said. The Kleberg Building, named after a former student and employee of the school from Galveston, "appears to have a bat problem." (Read an annotated version of the report here.)

While the Texas School for the Deaf appears to be the poster child for deferred maintenance in Texas, it’s not the only wing of state government dealing with unmet needs.

Care for the Disabled The Department of State Health Services wants $186 million for "facility needs" in state mental health hospitals. Of that, $84 million is "critical," according to the agency, meaning that it will affect "life-safety issues for patients and staff." Some buildings within mental health hospitals managed by the state are as old as 158 years. Among the others:

The agency also says that more than 600 children with special needs aren't getting the health benefits the state is supposed to pay for. It will cost $18 million just to take 150 of them off the waiting list in the next two years.

Consumer Protection  The Texas Department of Agriculture oversees the use of a broad array of weights and measures used by businesses, such as grocery store scanners and taxi cab meters. But budget cuts have crippled the agency’s ability to protect consumers, according to new Commissioner Sid Miller.

Miller said nearly 2,000 cases involving suspected violations of consumer protection laws — everything from fraud at the gas pump to pesticide overuse — haven’t been reviewed going back two years. Meanwhile, some $1.5 million in penalties that have been assessed already have gone uncollected. The agency has never inspected a single taxi cab meter.

Miller says his inability to quickly whittle down the backlog means average Texas consumer are “getting screwed” in the short term. He is asking for almost $50 million to restore funding that was cut in 2011, when the state faced a gigantic shortfall.

Oilfield Inspections The Texas Railroad Commission says it doesn't have enough inspectors to make sure oil and gas wells, as well as key pipelines that crisscross the state, are operating safely.

"The Oil & Gas Division is unable to provide the regulatory oversight with current staff because staffing levels have been flat since 2011," the agency wrote to lawmakers, requesting $8.1 million for more than 70 new inspectors.

State Parks Texas parks were supposed to have all the funding they needed when lawmakers began dedicating most of taxes generated by the sale of sporting goods back in the 1990s. But instead, the Legislature has raided hundreds of millions of dollars from the fund to balance the budget.

That has inflicted a crippling blow to many of the 95 parks in Texas and left thousands of acres of donated parkland sitting unused. Officials say the state needs $75 million immediately just to repair the buildings that are in the worst shape — including a closed pool in Abilene, failing taps and bathrooms in Garner State Park, months-long electricity outages in Dinosaur Valley State Park, and lack of air conditioning at Washington-on-the-Brazos, where the Texas Declaration of Independence was signed.

The recent pleas for more money to carry out core functions of state government and fix dilapidated buildings haven't been front and center at the Capitol. During his State of the State speech earlier this month, Abbott urged nearly every agency to cut its budget by 3 percent. He and Lt. Gov. Dan Patrick are also proposing more than $4 billion in tax cuts, saying the state can both meet its basic needs and return money to taxpayers.

But State Sen. Kirk Watson, D-Austin, says that for far too long, Texas politicians have short-changed the state of basic services under the guise of small government conservatism and "promising something for nothing."

"It's been good politics to say we can have those necessities of life in Texas, but we can do it without really paying for it," Watson said. "We obviously see the results in congestion and traffic. But we also see the results with degraded buildings, our credit rating being threatened because of failure to fund retirement systems, our parks are not being kept up."