We keyed this week’s survey of politics and government insiders off a sampling of questions originally asked in this week's University of Texas/Texas Tribune Poll.

So let's start things off with a disclaimer: the original questions were developed for a testing instrument designed to yield statistically valid readings of the mood of Texas registered voters. As is stated every week, this survey is nonscientific. So the numbers below can't be meaningfully compared to those from the UT/TT Poll, which has been featured on the main Tribune site all this week.

So with that out of the way, here's what we found:

On the question of whether voters would change behavior if a Tea Party emerged as an organized third party, only 4 percent would transfer allegiance to a Tea Party candidate. About two in five would back the Republican while roughly one in three would back the Democrat.

On the question of legislative priorities, nearly two in five insiders thought that providing public funds for transportation should be the highest priority. About a quarter listed increased funding for primary and secondary education. Lowering property taxes was identified by 10 percent, trailed by expanding Medicaid — 8 percent — and lowering business taxes — 7 percent.

On which is the best handgun carry policy to have in Texas, nearly three in five endorsed the current framework of concealed licensed carry. Another one in five endorsed licensed open carry while 4 percent supported the "constitutional carry" option. Another 17 percent thought Texans should not be allowed to carry handguns in public under any circumstances. 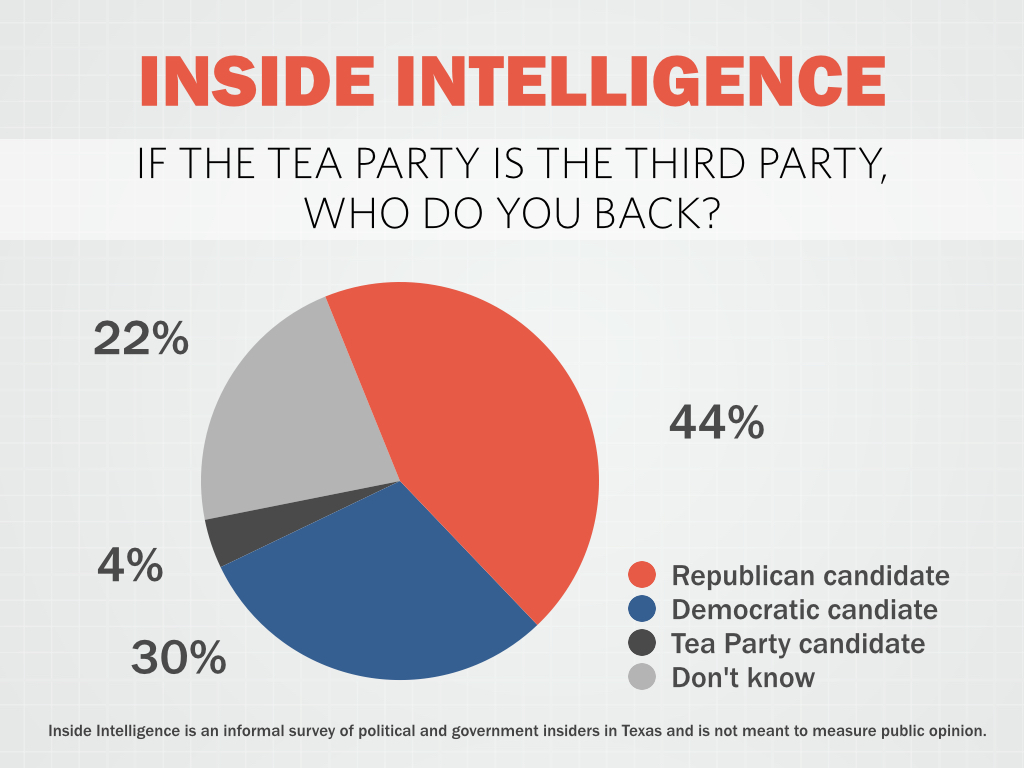 • "I'd rather focus on the candidate and his or her qualifications and experience, but I'm old fashioned."

• "What a shallow question. Believe it or not, there are still those who walk among us who consider the actual candidate — not just a political affiliation."

• "Depends on stance on issues. I lean fiscally conservative, socially liberal (meaning government needs to get out of my private life.) The way some Republicans have been trending toward more intrusion into my private life, I'm finding it hard to identify with any party."

• "I might vote Tea Party for federal, but at state level we need to keep getting things done in the same conservative manner we have been for 15 years."

• "In many cases, especially in Texas, the tea party candidate would be the same as the Republican." 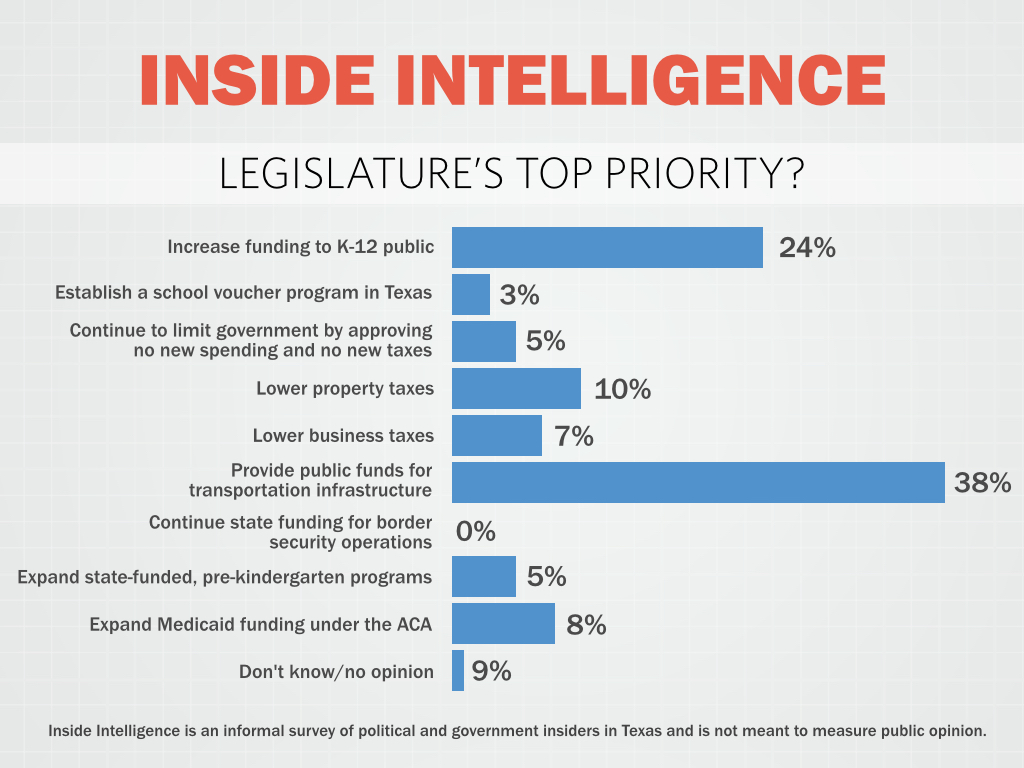 Below are some proposals that have been made for this session as the Texas legislature considers the budget for 2015-2016. Which of the following do you think should be the Legislature’s top priority?

• "Expanding Medicaid is a fiscal no-brainer. But among options that could potentially actually happen, better support for public education, including pre-K, is the clear priority."

• "Governor Abbott will use his bully pulpit to ensure his No. 1 priority, pre-K, gets funding."

• "Rural highways are in terrible repair, many without visible stripes and little signage. Urban areas are choked by traffic. Bridges throughout the state are in disrepair. This is not due to conservative policies, this is the result of irresponsible stewards of our great state. Tolls roads are NOT the answer!"

• "The state should increase funding for transportation and water infrastructure, but maintaining a small-government, low-tax government should be the overriding priority." 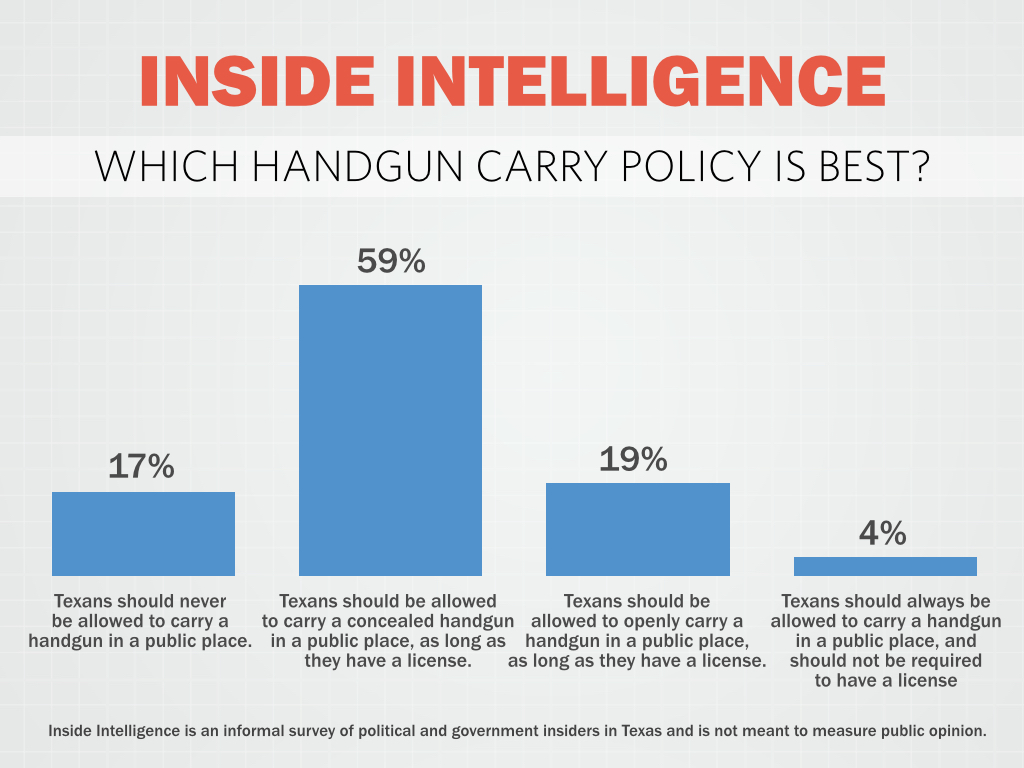 As you may know, Texas law currently allows legally licensed individuals to carry concealed handguns in public places. Which of the following do you most agree with?

• "I really liked it better when we didn't talk about guns, everyone just had one if they needed one."

• "I am a card carrying NRA, CHL guy, but no license? Why not get rid of driver licenses too?"

• "I don't see the value of open carry, which makes a lot of people nervous."

• "Am I the only person who just doesn't care, provided that folks carrying a weapon have passed a background check? No matter what happens, I won't be carrying a handgun — at least, not anytime soon." 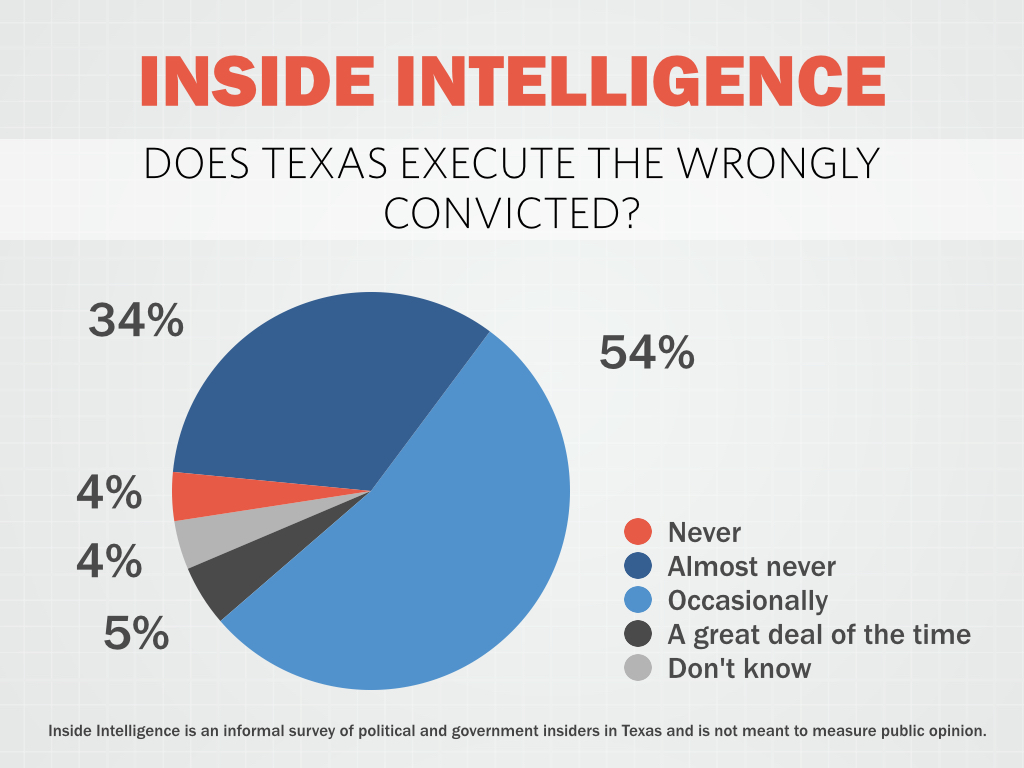 • "Isn't sending one innocent person to his death too many?"

• "The death penalty should be thrown out not because it might have a fault, but because Judeo-Christian beliefs tell us every life is precious."

• "No idea, but since humans are fallible — I’m certain innocent people are convicted of the death penalty more often than we'd admit to in public."

• "The justice system isn't required to provide justice, just due process. We know for a fact that wrongful convictions occur. Given those facts, one would think we shouldn't go so far as to take people's lives."

• "We know it's happened in the last 20 years, but I doubt it's very widespread." 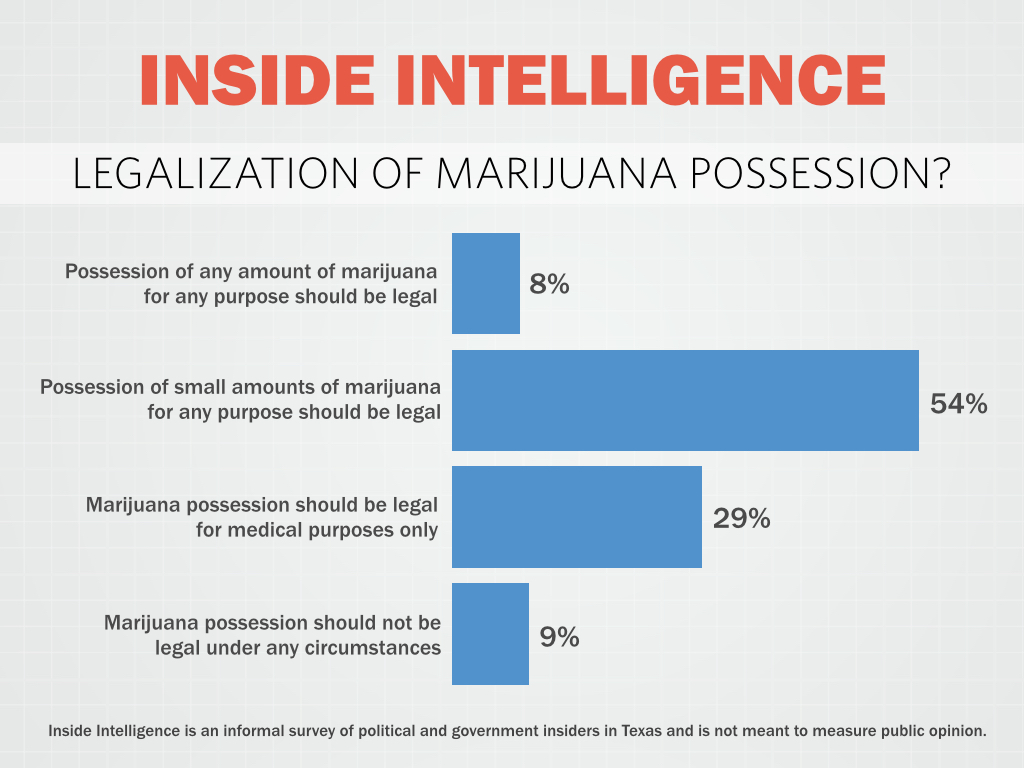 What is your opinion on the legalization of marijuana possession?

• "If you can carry a loaded Roscoe in public, what is wrong with Roscoe being loaded in public?"

• "We use other powerful drugs for medical purposes. Marijuana should be used for the same purposes and in the same ways."

• "It's only a ‘gateway drug’ because it's illegal. So if you legalize it, it's like tobacco, and I haven't heard claims that tobacco use leads to harder drug use."