With rallies touting the open carry of handguns and school vouchers bookending the week, we started off this week’s survey of politics and government insiders with questions on those two hot-button issues of the session.

Meanwhile, only 6 percent believe lawmakers will allow Texans to carry handguns openly without need of a permit.

More than three-fourths think that school vouchers will pass the Senate but die in the House, where rural legislators who have traditionally been against vouchers hold more sway. Almost one in five think vouchers will pass.

Finally, our insiders did not coalesce around a single policy approach on linking lawmakers' per diems to the amount lobbyists can spend on lawmakers without reporting it in detail. Increasing the per diem only, increasing both amounts and requiring detailed accounts of all spending had almost equal backing for our insiders. About a fourth of the insiders backed each of those approaches.

We also asked what were the big surprises coming out of the Senate committee appointments and who were the biggest winners and losers. Many listed the naming of a freshman as committee chair as a surprise. 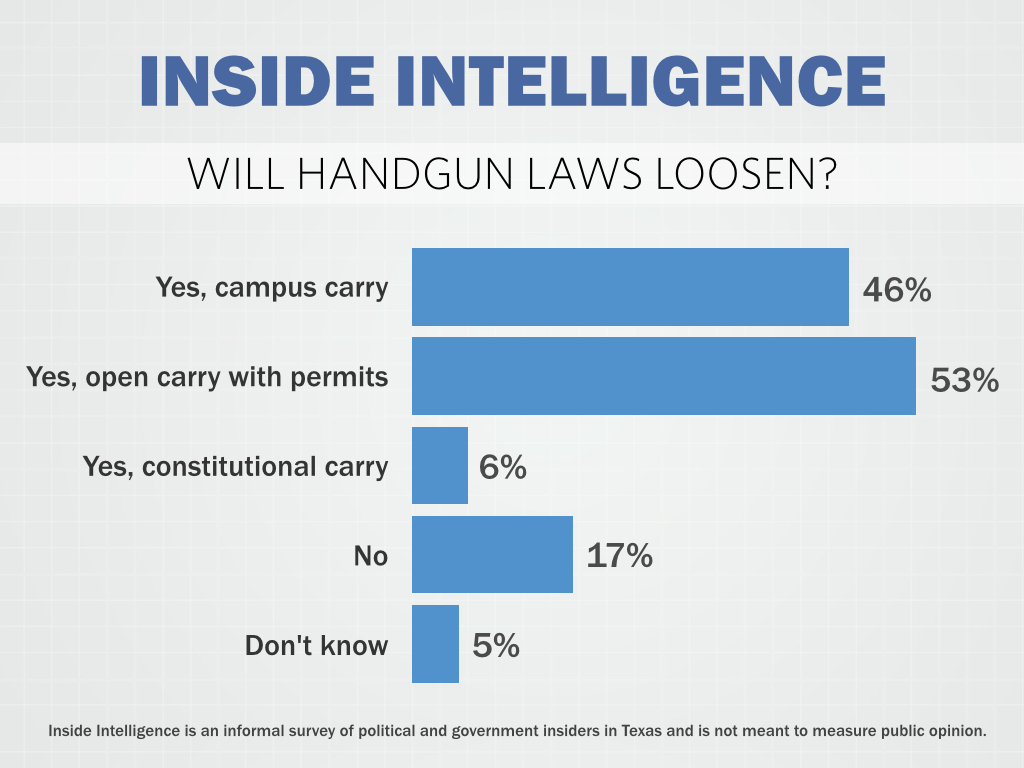 Will lawmakers broaden handgun laws this session (check all that apply)?

• "Lt Gov. Patrick has a choice to make. Who leads the Senate — him or Jonathan Stickland? The bullying tactics aren't just coming from the gun nuts. Their friends at the Capitol are also willing to push past the limits of acceptable behavior."

• "Open carry will still be limited where businesses object."

• "We have open carry — people who get to do it are called cops!" 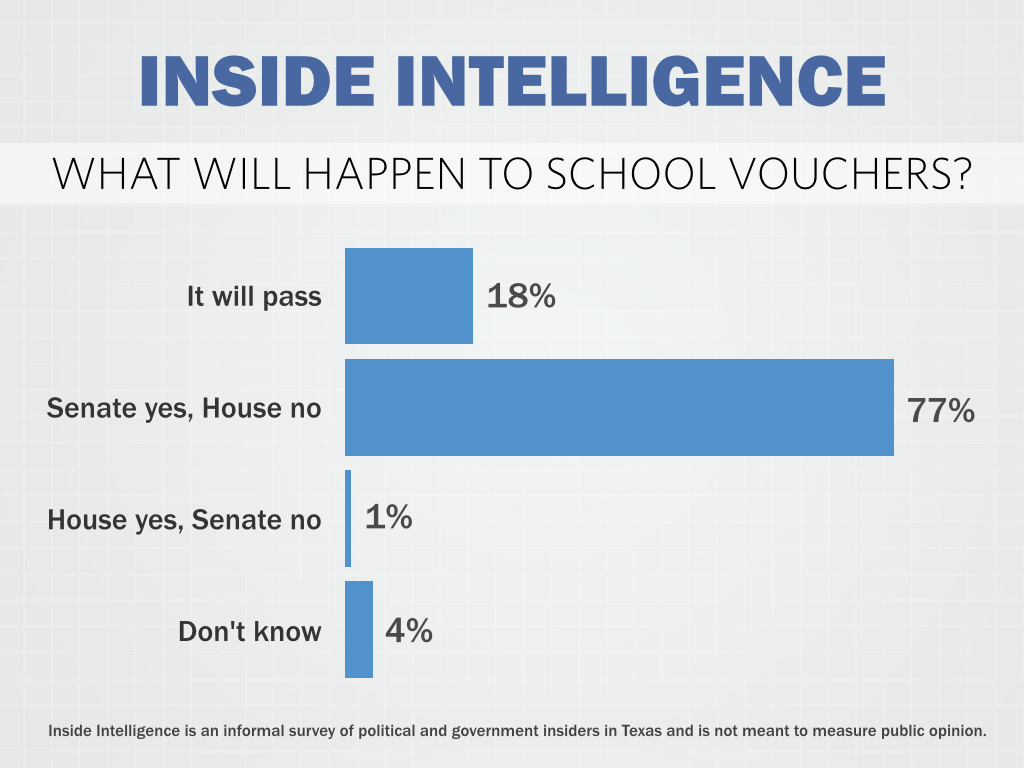 What is the prognosis for legislative approval of public vouchers for private schools this session?

• "If tax relief gets done then vouchers on anything other than a small scale will not be a top priority. DOA in the House."

• "Based on Lt. Gov. Patrick's passion for the issue, there will be significant gains in the House; time to stop protecting the educational industrial complex."

• "At some point, the issue of the current bill being a ‘camel's nose under the tent’ creating a multi-billion dollar expense and, raising the issue of significant new state taxes, down the road will give people pause. Taxes trump vouchers."

• "And will be part of early childhood and comprehensive education budget that will be historic for first term Governor Greg Abbott." 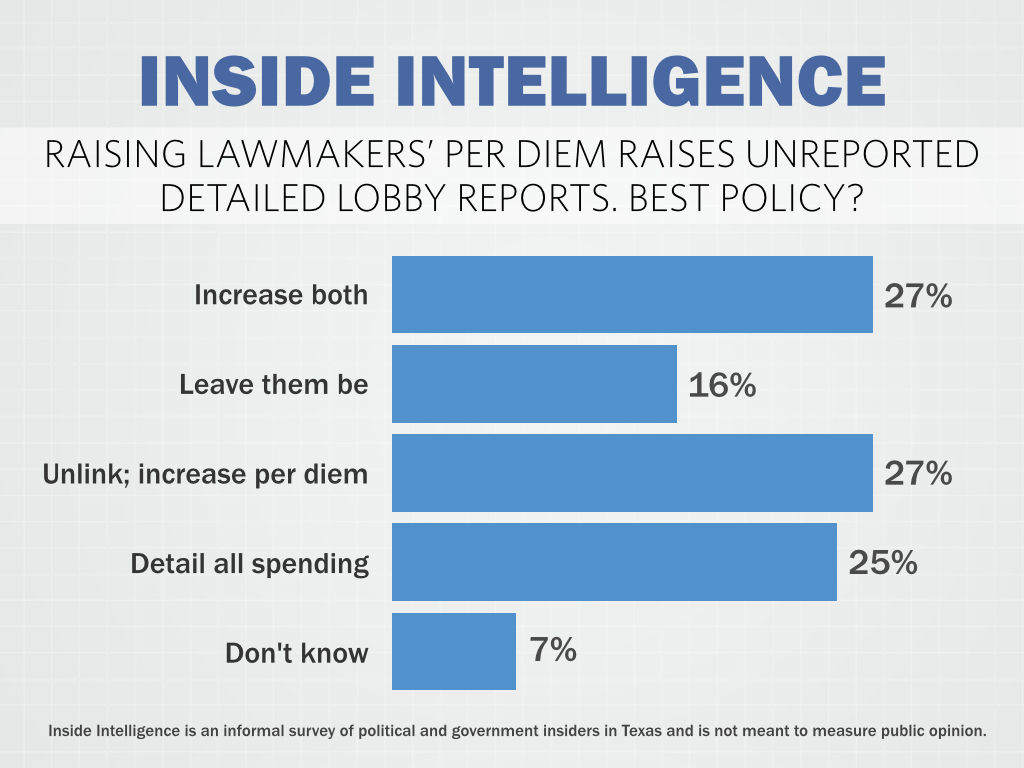 A raise in legislators’ per diems this session would allow lobbyists to spend more on lawmakers without reporting it in detail. What's the best overall policy?

• "The key is timely reporting. Let the people have access to who's accepting what (or who's paying what to whom) — they're smart enough to vote out rotten apples who abuse the system. No, seriously, they are..."

• "Where's the Tea Party on this issue? For all the rants they make on guns and government transparency, they sure are suspiciously silent on this issue."

• "I am always amused to see this question arise; necessitates an answer based on implication, bribery is against the law, is and always has been."

• "Lobby reporting is simply a game of gotcha. The detailed reporting threshold is lower on a real basis than it was 10 years ago. What's the big deal?"

• "Senator Estes proved that just showing up might be 80 percent of life, but it's 0% of getting appointed a chair in the Texas Senate"

• "A freshman chair? WTF? Does the new senator even know about the secret restrooms located next to the copy room and across the hall from the elevator behind the chamber?"