A new governor is now installed and we started off this week’s survey of politics and government insiders with a question about Greg Abbott’s top priorities.

More than half think border security will make the governor’s list of emergency issues, if there is such a list; 26 percent predict Abbott won’t designate any items for early consideration. Transportation and contracting issues got some votes, but open carry only moved 6 percent of the insiders.

How much will oil cost next September? You’d have to sign off on such a prediction if you were the state comptroller. Most of our insiders guessed the barrel price of West Texas Intermediate will be between $50 and $70 on that date. None think it will be over $90; 2 percent think it will be below $30. Wait and see.

The House has presented its base budget — the starting point for fiscal debate — and most of the insiders expect lawmakers to spend more than that document’s $98.8 billion in general revenue recommendations.

We asked what kinds of spending were most likely to increase from the base numbers; transportation led the way, followed by border security and public education. 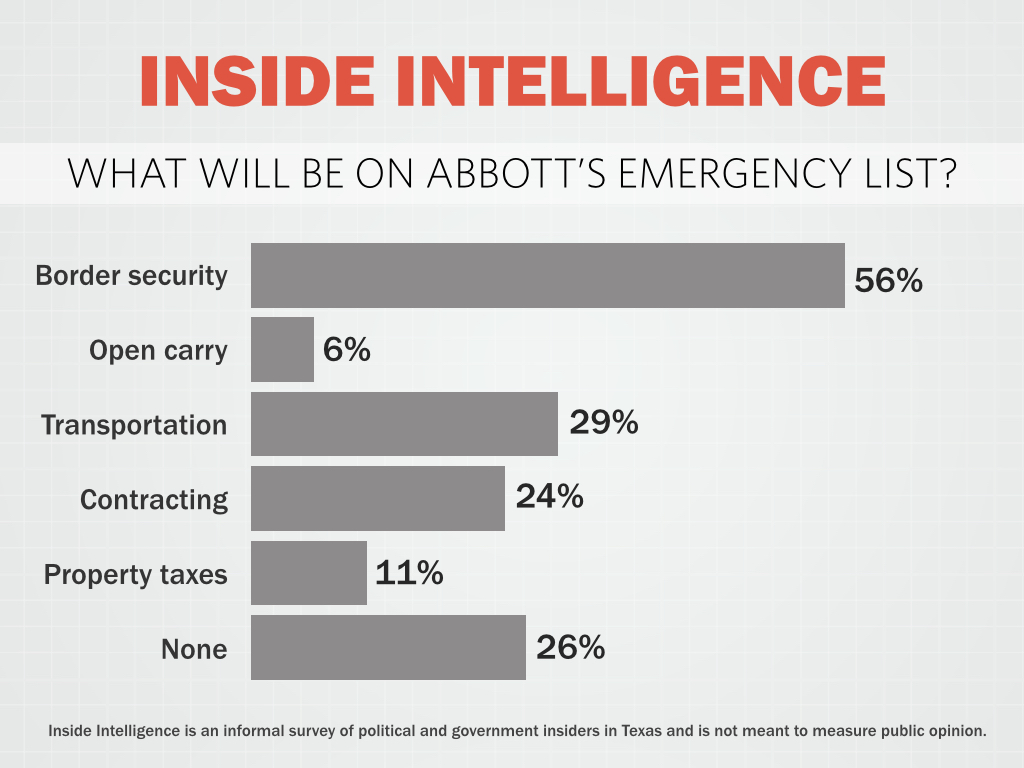 Which topics are likely to make Gov. Greg Abbott’s list of emergency items? (Choose all that apply)

• "The assumption is that he has to designate emergency items. I don't think he has to or will. But if he does, it'll likely be property taxes, border security, and public education. At least judging by his speech yesterday..."

• "I believe GA will be very conservative (safe) with his emergency issues. Transportation is the only issue which is relatively safe."

• "After the news coverage of the HHSC and DPS contracting issues, that one seems to fit the bill. "

• "If Abbott declared border security an emergency item it will clearly put him in league with Patrick against Straus. " 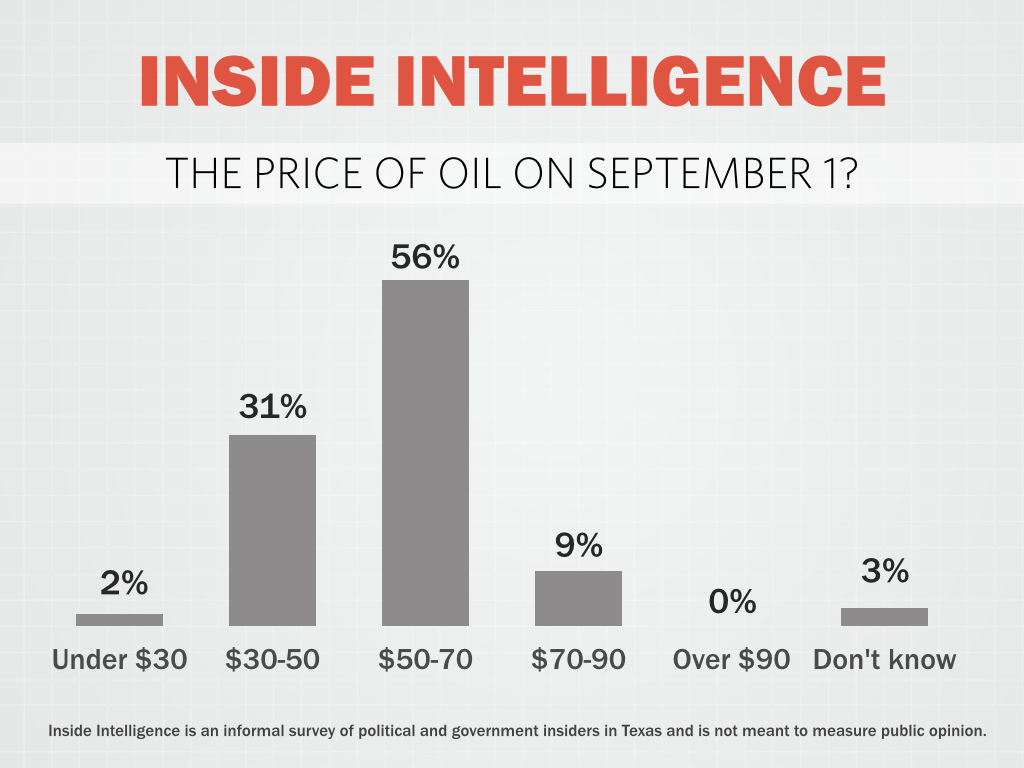 Take a turn on the revenue estimator hot seat: What will be the price of a barrel of West Texas Intermediate on September 1?

• "If I had any credible way of predicting the price of oil, would I be a lobbyist?"

• "The average price the past ten years is about $83, but during those years — especially the early years — we didn't have today's volatile environment around the globe driving down the price. I would expect the price to come up slightly. One thing's certain: the recent heyday(s) of $90-100+ are gone for the foreseeable future. "

• "It will be heading up or up by the last quarter of this year. The dictatorial thugs in South America need to sell their oil at a higher price to feed their 'people'. Unrest is not a good thing. Another question that needs to be asked is how long and how much pressure do we want to keep putting on Putin and Iran. That is a part of the equation many people are not addressing. "

• "I am cautiously optimistic that oil will get just above $50/barrel." 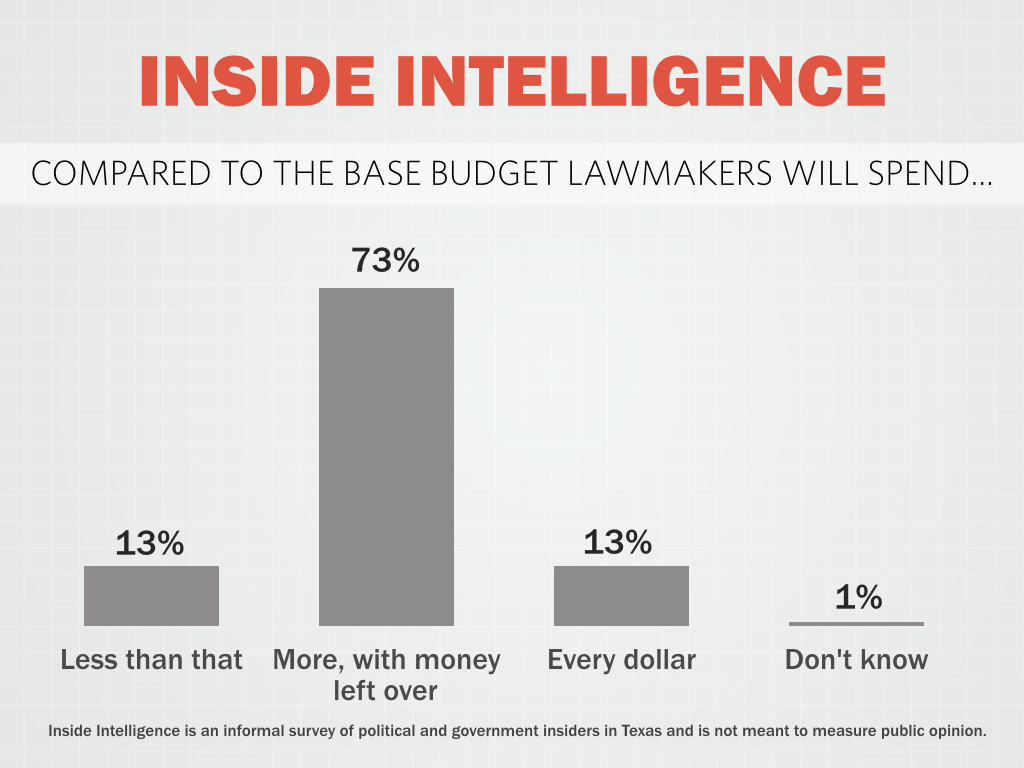 The Texas House released a base budget which spends $98.8 billion in GR, leaving billions of available dollars on the table. Budget writers will spend...

• "The low price per barrel will sober up all the extraneous spending talk."

• "The House will pass a budget using every dollar and the Senate will strip it back."

• "Not only will the constitutional spending limit force the Lege to leave money on the table, but the Senate will insist on bragging rights about low spending and go even lower than the House."

• "They'll spend more than the House base budget, but there will be 9 or 10 billion left for tax cuts or putting in the bank."

• "Significant tax savings will be passed by the Texas Legislature"

• "The issue of tax cuts is real, it was not a campaign gimmick...the '...lots left over.' will go back to the taxpayers." 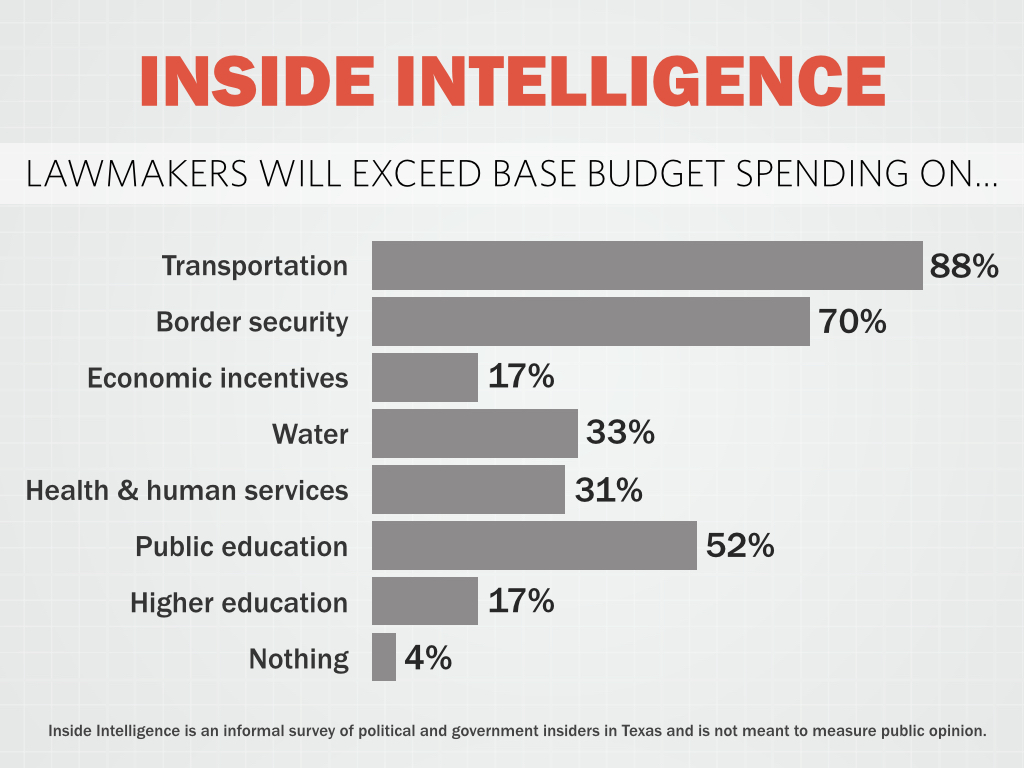 Lawmakers will spend more than the base budget amounts on... (Choose all that apply)

• "They *have* to spend more on HHS; transportation, border security, and education are priorities of voters, so they'll get additional funding (not a whole lot more, but more than the baseline)."

• "They will spend more on transportation but only after seeking the safe harbor of a constitutional amendment dedicating motor vehicle sales tax. They will also, just because it has become a habit, intentionally under-budget Medicaid."

• "Also on prisons. If the additional money isn't in the budget by the end of the regular session, it'll have to be added by end of fiscal 2017 (supplemental)."

• "Things will go in only one direction this session - toward preventing being primaried."

• "They'll spend more on transportation because everyone wants it and the Speaker has promised an end to diversions. It won't be enough, but it will be an accomplishment box they can check. They'll spend more on Health and Human Services, not because they want to, but because it just costs more and their ability to cut it is low."