ADDISON — Scott Turner has never been the type to take things slow.

In high school and college, he was known for his fast feet, a talent that led to an eight-season career in the NFL despite naysayers telling him he was too small.

“The Lord gave me a great gift to run,” Turner said with a smile during a recent interview at his North Texas office.

Since a 2004 leg injury forced him to end his football career, Turner, 42, has continued to show an inclination toward picking quixotic goals, regardless of the obstacles in his path.

Now, with one term in the Texas House under his belt, Turner is making a play for the powerful position of speaker of the Texas House, even though the odds are stacked against him.

“I believe I’m a true conservative leader, a servant leader that has the heart and the ear of the people in the forefront,” Turner told radio host Glenn Beck this month.

Turner is the latest Republican House member to vie to unseat House Speaker Joe Straus, a San Antonio Republican who has held the office since 2009. Like previous challengers, Turner has argued that Straus is not conservative enough to lead the House in deep-red Texas. Yet it's the members of the House who will decide the race, and more than 70 members of the 98-member House Republican Caucus have backed Straus' re-election, touting conservative measures passed under his leadership and questioning whether Turner is prepared to take over the reins.

“I really do appreciate Scott and what he stands for,” said state Rep. Ron Simmons, R-Carrollton. “He and I agree on most of all the issue, but I don’t think any freshman, including myself, is ready to be speaker of the House.”

Turner dismissed questions about his experience, arguing that Texans aren't being properly represented under Straus.

"It is what I think is necessary," Turner said. "I think the House could benefit from a different kind of leadership."

Waging a campaign for one of the most powerful positions in Texas politics was not something Turner ever imagined doing while growing up in Richardson. He has described his upbringing as difficult, in part because of his parents’ divorce when he was about 8, but also one that was centered on a goal.

He attended J.J. Pearce High School, where he excelled at football and track. He went on to the University of Illinois, where he played both sports and studied speech communications. After graduating in 1994, the defensive back signed a three-year deal with the Washington Redskins.

Soon after the start of his professional career, Turner created a motivational speaking company, delivering speeches to various groups during the off-season.

“One thing you learn from the NFL, if you listen to the veterans, is that the NFL stands for ‘Not For Long,’” Turner said. “So you have to make a decision that no matter how long my NFL career lasts, I want to have something to fall back on.”

After playing for the Redskins, Turner spent four seasons with the San Diego Chargers. He was cut from the team in 2001 and didn't play for a year before getting picked up by the Denver Broncos. At training camp in 2004, he tore his hamstring tendon while running. After 8 years and 101 games, his career was over. 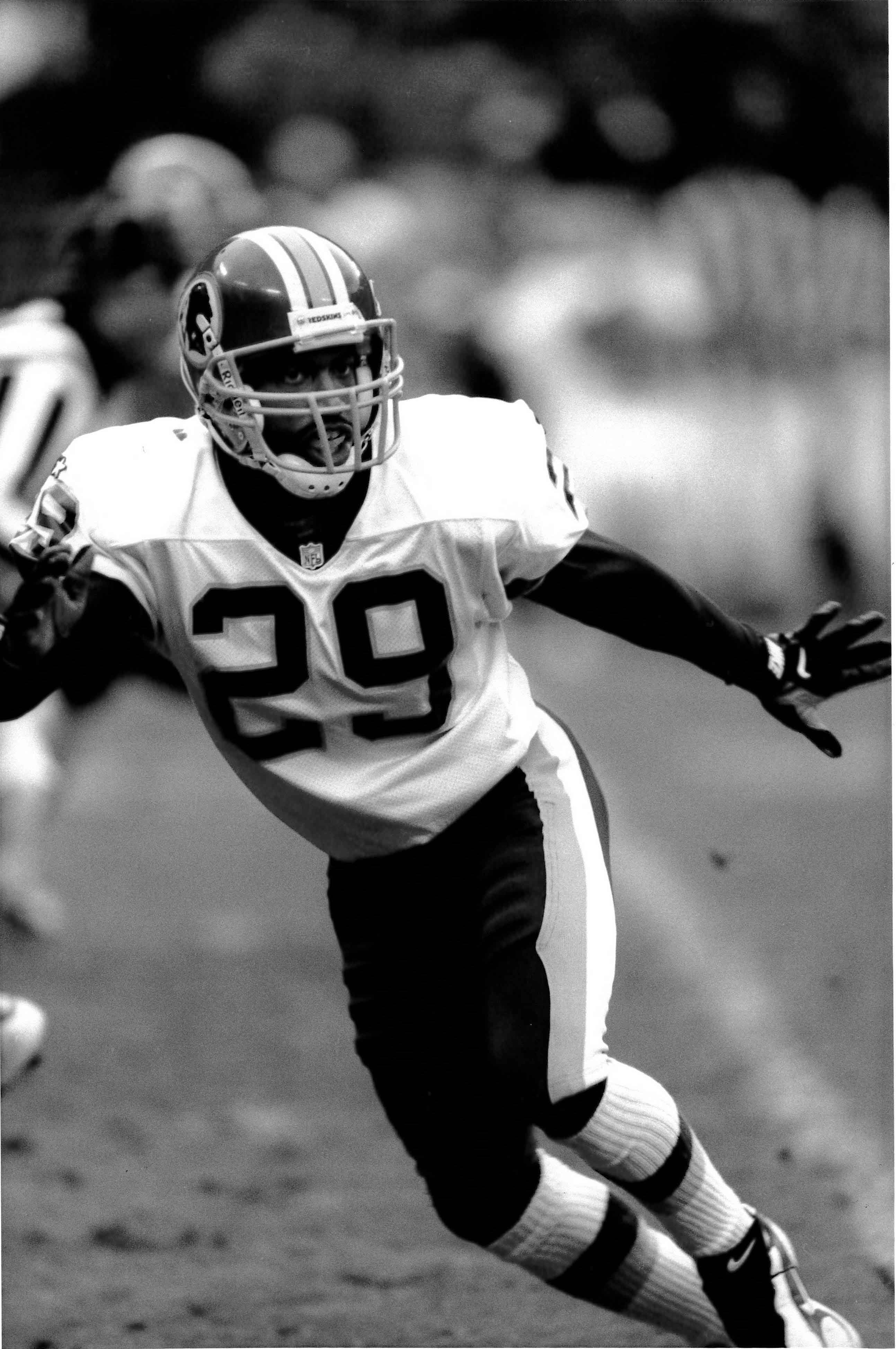 Enlarge photo by: Washington Redskins
Scott Turner played eight seasons in the NFL before a 2004 leg injury forced him to end his football career.

Turner said he also endured multiple concussions during his professional career. Though he did not take part in a recent class-action lawsuit filed by ex-players against the NFL related to the league’s treatment of concussions, he agrees it’s a cause for concern.

“That’s why we try to teach the younger football players proper technique and how to tackle, how to hit, how to block and how to protect themselves so that the next generation of players will not suffer from the cognitive issues that those who have gone before them have,” Turner said.

Turner said he could not say for sure how his own injuries have impacted his health.

“Sometimes I get a headache. But do I attribute that to a concussion?” he asked and then shrugged. “A lot of people get headaches. But I will tell you that I’ve been very fortunate that I’m able-bodied, I’m able-minded. I still have my senses about me.”

Just before his football career ended, Turner began his first explorations into politics, an area that he said he was motivated to explore by his Christian faith and an interest in being a "servant leader." He took an unpaid summer internship with then-U.S. Rep. Duncan L. Hunter in California. After he officially left the NFL, Turner took a full-time job on Hunter’s staff.

In 2005, Turner launched a campaign for a congressional seat in a special election in the San Diego area. Though he drew praise for his speeches on the campaign trail, he came in eighth among Republicans, drawing less than 2 percent of the vote.

The next year, Turner moved back to Texas, where he continued his motivational speaking and took a job at Systemware, a content management software company where he is currently director of business development and corporate chaplain. (This year, Turner launched a new venture, a custom men's suit business.)

He ran a 2012 campaign for a newly drawn state House seat encompassing fast-growing Rockwall County and part of Collin County. He easily won the Republican primary and coasted to victory in the general, drawing 85 percent of the vote against a Libertarian candidate.

In his first session, Turner aligned with a coalition of Tea Party Republicans that frequently butted heads with Straus. He said he began considering a bid for House speaker after the end of three special sessions held that summer.

“I found myself contemplating that there are things that I think can be done in a different manner,” Turner said. On Beck's show this month, he cited school choice legislation and a ban on sanctuary cities as areas in which more conservative measures might pass with him as speaker.

Straus has said he believes the Legislature has focused on the issues that the majority of Texans care about, such as education, water and infrastructure spending.

While speaker’s races are common, the Texas House hasn’t held a contested record vote for speaker since 1975. In every session since, the winner of the race was clear before the vote, prompting all other challengers to drop out to avoid forcing supporters to back a losing candidate. But Turner has made clear that he intends to require the House’s 150 members to cast a record vote on the first day of the session and state their preference.

"I don’t think 'Oust Straus' is the right message," said state Rep. Matt Krause, R-Fort Worth, a Turner supporter, referring to a slogan adopted by some conservative activists. "It’s pro-Scott Turner. It’s just his incredible attributes of leadership, of communication, of articulating a vision."

But Straus supporters have accused Turner of being a puppet of Tim Dunn, a Midland oilman and the main financial backer of Empower Texans, a conservative group that has vigorously opposed Straus since he became speaker in 2009. Empower Texans President Michael Quinn Sullivan has suggested his group plans to score votes for Straus negatively in its scorecards on members' conservatism next session. The grades are often used against Republican incumbents by primary challengers.

“House members know now, and going forward, that Texans are expecting a record vote on leadership,” Sullivan said. “What happens in Austin no longer stays in Austin, with more and more Texans understanding the implications of what used to be considered just inside baseball."

Last month, state Rep. Charlie Geren, R-Fort Worth, and other Straus supporters also came out for a record vote on speaker in hopes that it would showcase Straus’ lopsided support and the failure of Empower Texans’ efforts against him.

“We need to be looking at what’s good for this House and, therefore, what’s good for the Legislature and the state, not some third-party group that has their own agenda,” said state Rep. Jim Keffer, R-Eastland, a Straus supporter.

Turner said he’s an “independent thinker” and took umbrage at the notion that others are controlling his campaign.