Rick Perry leaves office after 14 years as governor next month, so we asked our insiders in politics and government for their impressions of his time at the top of state government.

Eight percent think he’s the best governor ever, and another 39 percent rank Perry above average. Five percent say he is the worst governor in the state’s history, and 25 percent rank him worse than average. About one in five called Perry average as Texas governors go.

Perry has made no secret of his interest in running for president in 2016, although he says he will not make a decision about that race until sometime next year. That said, 77 percent of the insiders think his current post is the last public office he will hold.

We asked the insiders for their take on the governor’s failures and accomplishments, as well as for comments on the questions above. A full set of those responses is attached. Here’s a sampling: 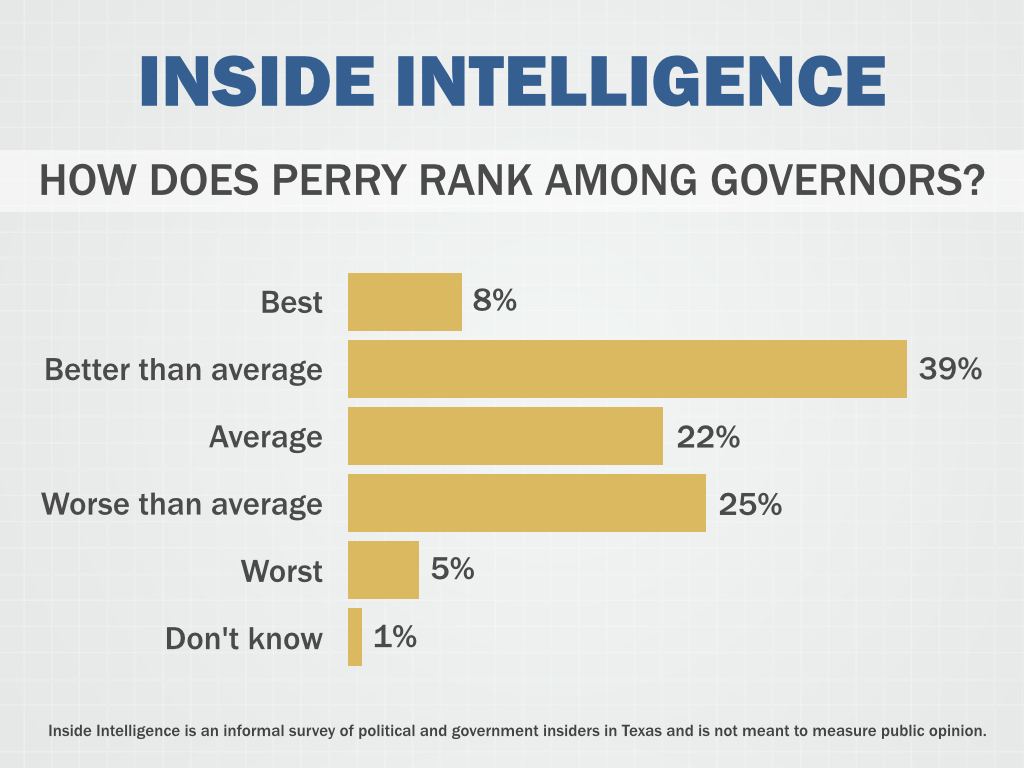 How would you rank Rick Perry among Texas governors?

• "Bigger and badder. Definitely transformative, but not in healthy ways. "

• "The man won gubernatorial elections in 2002, 2006 and 2010. Only fourth governor in Texas history to serve three terms. Texans kept voting for him, sending him back to the Governor's Office again and again and again. He must have been doing something right."

• "Tough question: He had a significantly longer period of time to succeed or fail so it's tough from the perspective. He was arguably more corrupt than modern governors. He succeeded on many front -- especially public safety and homeland security issues and economic development (despite the graft). He was a failure in most legislative respects -- very contentious relationship with the Lege and few real successes within that body. He's most noteworthy for things like 'oops' and 'get on down the road' and the clouds of cronyism and an official indictment... so I guess I gotta say 'worst'. "

• "Clearly the best of the modern era. A visionary leader who charted a course for economic success unparalleled by any of his predecessors."

• "Austin hates him, but the people of Texas clearly loved him."

• "He concentrated on his own political advancement while completely neglecting the long-term interests of the state."

• "He came in with strength--calling on the Legislature to include ZERO-based budgeting in their next budget to deal with a $10 billion shortfall. And he's going out with strength--adding a strong pro-LIFE bill to special sessions to offset the Speaker's success in burying them during the regular sessions."

• "I agree with precious few priorities pushed by Perry, but it's hard to argue with longevity. Clearly voters stayed okay with him for years."

• "Longevity does not equal excellence. "

What do you think has been his biggest achievement?

• "Economic 'reform.' He focused on taking government processes that frustrated the private sector and cut turn around time down to a third. This is what got the country ignited about doing business with Texas. It was an attitude of lets fix this and get you an answer ASAP. "

• "He was the first to identify the tea party movement and take advantage of that wave. He was also the best 'Yell Leader' for Texas. "

• "Homeland security - by far. He stands tall when hurricanes hit and disasters strike."

• "Named every single current gubernatorial appointee and had input on probably every managerial hiring at every state agency. "

• "Surviving- he reads the battleground well and adapts. From Democrat to tea party/secessionist, he can change stripes and ruthlessly attack his opposition. "

• "Entrenching Texas into the 'red' column"

What do you think has been his biggest failure?

• "It's a toss up ... either the Trans-Texas Corridor or not having enough influence with God to get the rains falling during the drought."

• "It’s a toss up between crumbling infrastructure, poverty, and sky high insurance rates."

• "Education in Texas has slipped tremendously especially at the university level. The inability to manage a surplus and direct it toward higher education is a failure."

• "Reckless pursuit of Trans Texas Corridor and the HPV vaccine will go down as political miscalculations."

• "What he has done to some of the state agency's rep. And how far on debt he has taken Texas "

• "His politics have prevented the state from receiving billions in federal dollars. This has cost us money and mostly because of politics. Governing should be what is best, not what makes you look best."

• "His near-total lack of leadership in preparing the state for future road, water and education needs." 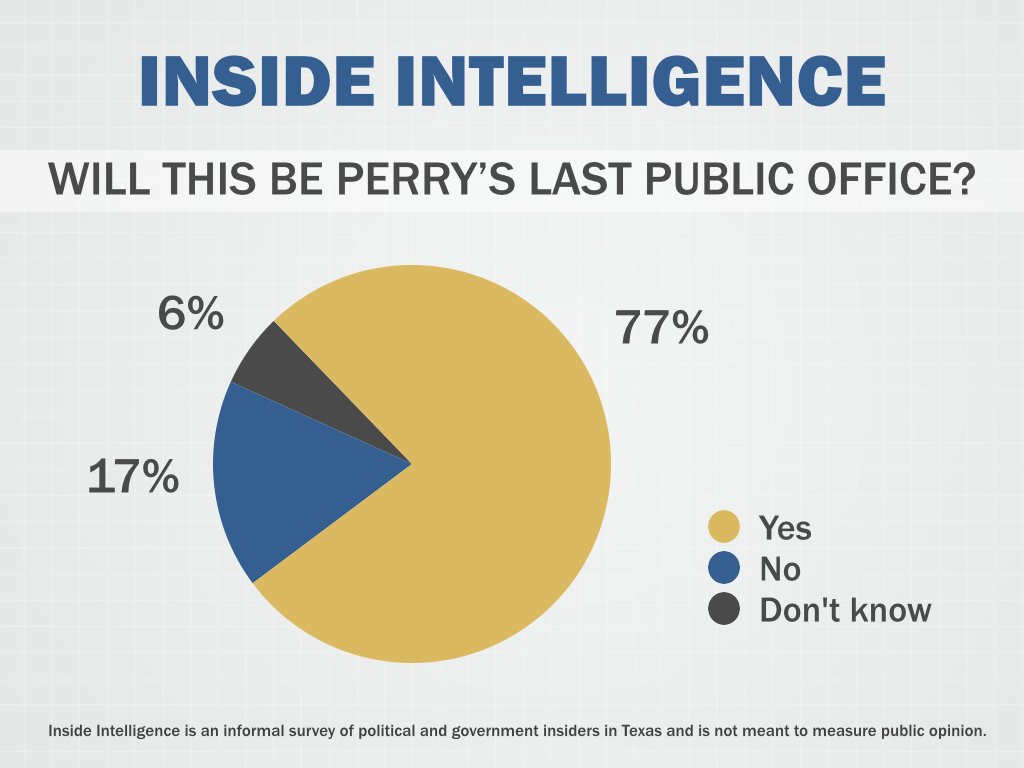 Do you think governor is the last public office Rick Perry will hold?

• "A republican presidential administration might appoint him to something. "

• "He will go make 'serious money' and be the next Rudy Giuliani (that's not a complement). "

• "If he runs for President, he will be a leading candidate. Whether or not things break his way -- it's too early to tell."

• "Maybe the last elected office but probably not the last public office. "

• "I don't know whether he'll be president, Vice President, a cabinet secretary or university president but he will hold some public job."