Two issues that figure into any discussion of the state budget — college tuition and the border surge — figured into this week’s survey of insiders in politics and government.

A slight majority believes the schools, and not the Legislature, should set tuition, and think the best way to control tuition rates is for the state to put more money into its colleges and universities. Cutting costs and regulating tuition increases tied for the second most popular controls.

And what about efforts to get the federal government to pay for that policing? The vast majority of our insiders — 86 percent — don’t think that’s going to happen. 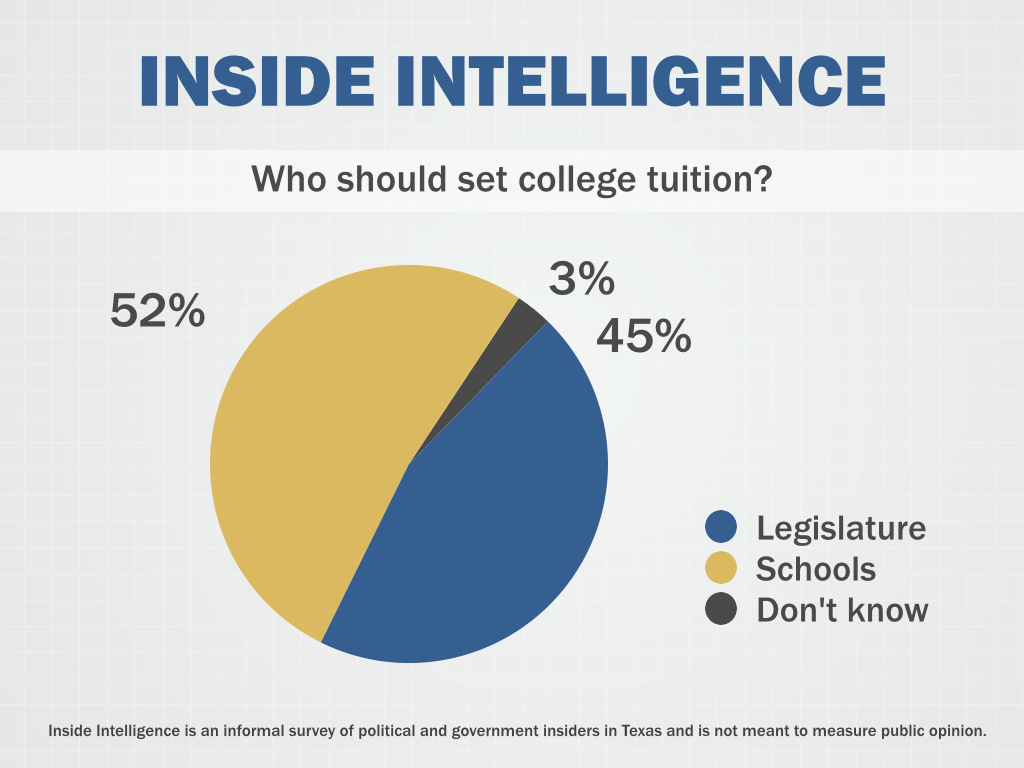 Should the Legislature set tuition rates at state colleges and universities or should the schools continue to control that?

• "State Colleges and Universities were given the opportunity to control tuition rates and they were not able to handle that responsibility. Their greed has put our state economy in jeopardy and therefore, as much as my free-economy self hates saying it, it's time for the lege to rein them in."

• "The problem isn't deregulation. The problem is university presidents who create unnecessary layers of administrative employees and non-teaching faculty. Flatten the bureaucracy and put professors back in the classroom."

• "The increased tuition rates set by universities and colleges doesn't bother me near as much as the overall decline in state support to these public institutions of higher learning. While the total dollar amount appropriated by the Lege might be higher than in the past, as a percentage of the universities' overall budgets it continues to decrease. For example, in the mid-1980s, the state provided 47 percent of UT-Austin's total budget; today it's less than 15%. This is one (but not the only) reason why colleges and universities need to raise tuition--to compensate for the lack of state support."

• "When the legislature cut back funding for higher ed, it lost the 'moral' leverage to put a lid on tuition. "

• "The legislature represents the people (supposedly) and is more in tune with the pain of continuing rising tuition. The schools just want more money." 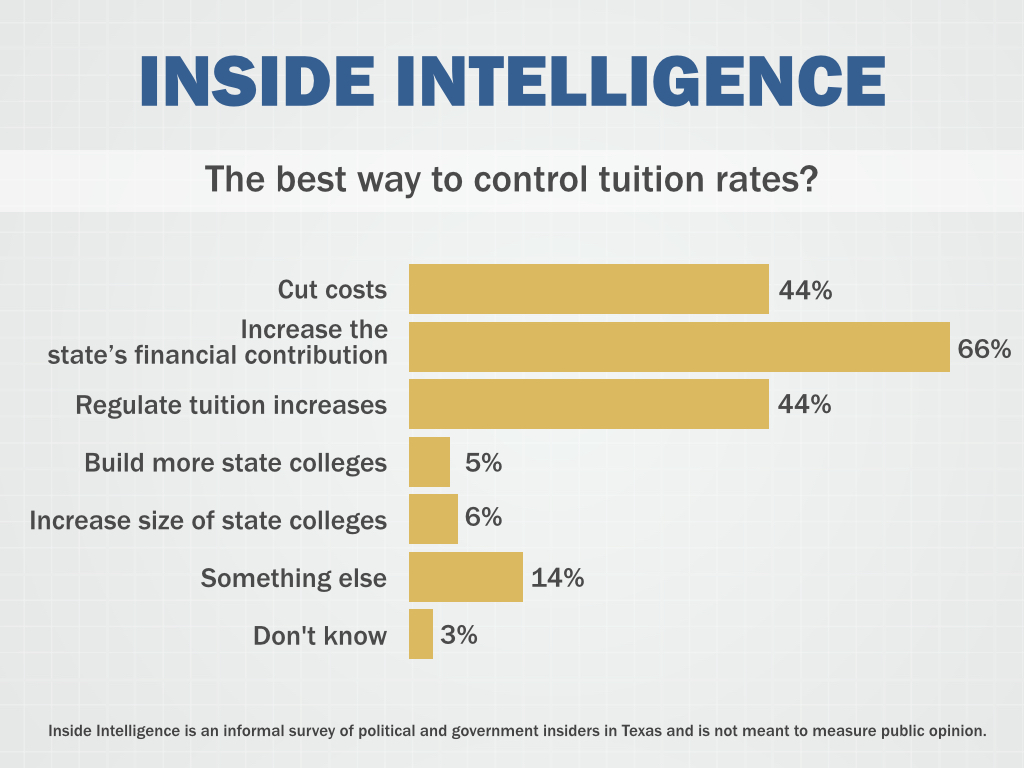 Which is the best way to control rising tuition at state colleges and universities? (Choose all that apply)

• "We've moved from state-supported to state-affiliated in terms of funding...must move the pendulum back or we're going to be in the same place we are with property taxes. We want more and more services and don't want to pay nuttin' for 'em!"

• "It's OK to let the tuition rise, as long as scholarships increase along with it. Kids with wealthy suburban parents should pay full freight, and kids from families struggling to get by should go free. It works for Harvard."

• "We have made a big deal about the cost of college when it is not. If you want it go get it. Find the money. If you don't want it that bad then you don't want it that bad. Stop crying about it. Part deux: if you want to put it on the schools give them incentives to eliminate ridiculous programs and courses that might offer very little to the student, the school and society. Do we need classes like 'The Linguistics of Tolkien's Middle Earth'“?

• "Get rid of the notion that college is 1) for everyone, and 2) a job training program. College isn't there to prepare you for a job or career. It's there to teach you how to think critically, write well, and broaden your horizon. Too many worthless degrees. Cut (not eliminate) those programs and you're off to a solid start. "

• "More funding needed at the staff and faculty levels and for students, but administrative overhead and salaries could use a look."

• "The best way to control costs at state colleges and universities is to trust prospective students and their parents to individually factor cost in and compare that to the value provided to make the best choices possible. This is to say, let the markets work as there are no shortages of higher education consumers and producers." 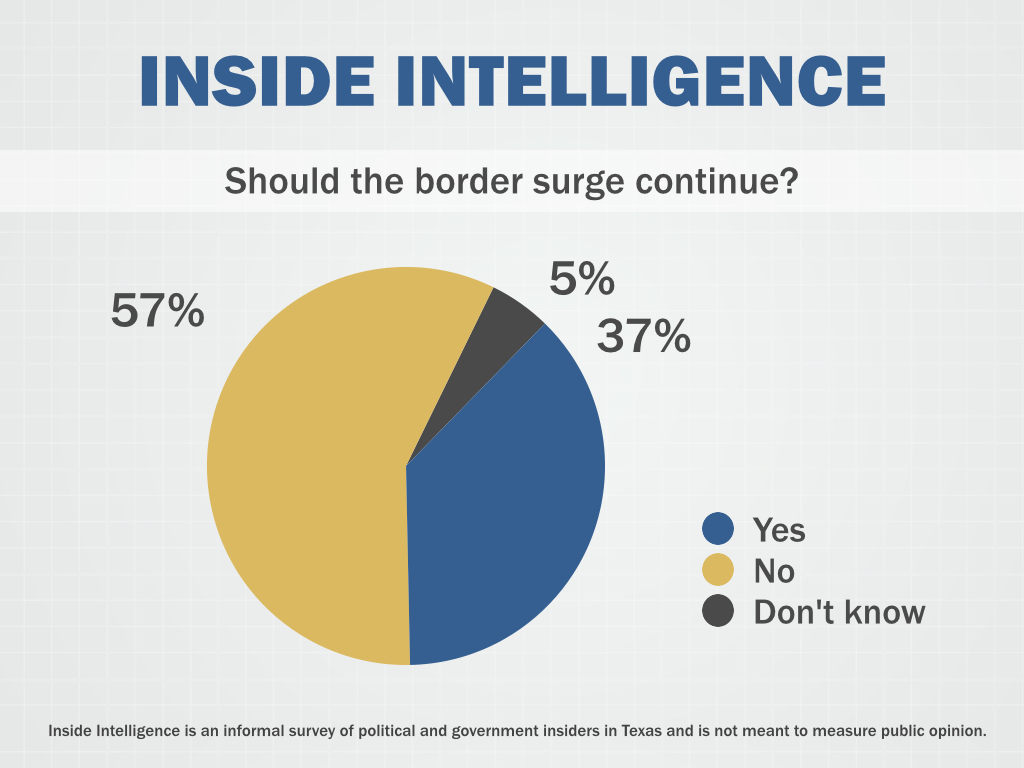 Should Texas maintain the surge of state police and National Guard troops on the Mexican border?

• "As Mexico steps up their efforts to prevent entry and to apprehend illegal immigrants who have entered Mexico, as well as US law enforcement's recent efforts to break up smuggling rings, the border surge may no longer be necessary."

• "Wish there had been an option for 'Should we have sent them in the first place?' "

• "Texas *should* not do it; it's the job of the federal gubmint. But since the Obama Administration selectively enforces laws, someone has to step up to the plate and protect the homeland."

• "It's creating real problems both in the National guard and DPS. Serves no real purpose except political."

• "The president has made this necessary, both politically and to deal with a real problem."

• "Enough already. Local communities elsewhere in the state need their troopers back, and the National Guard troops are nothing but window dressing--they can't do anything while there."

• "The question to be answered is what should border security look like in the future. There is a vast amount of technology coming out of the war theater that can make the effort to secure the border more cost effective and efficient." 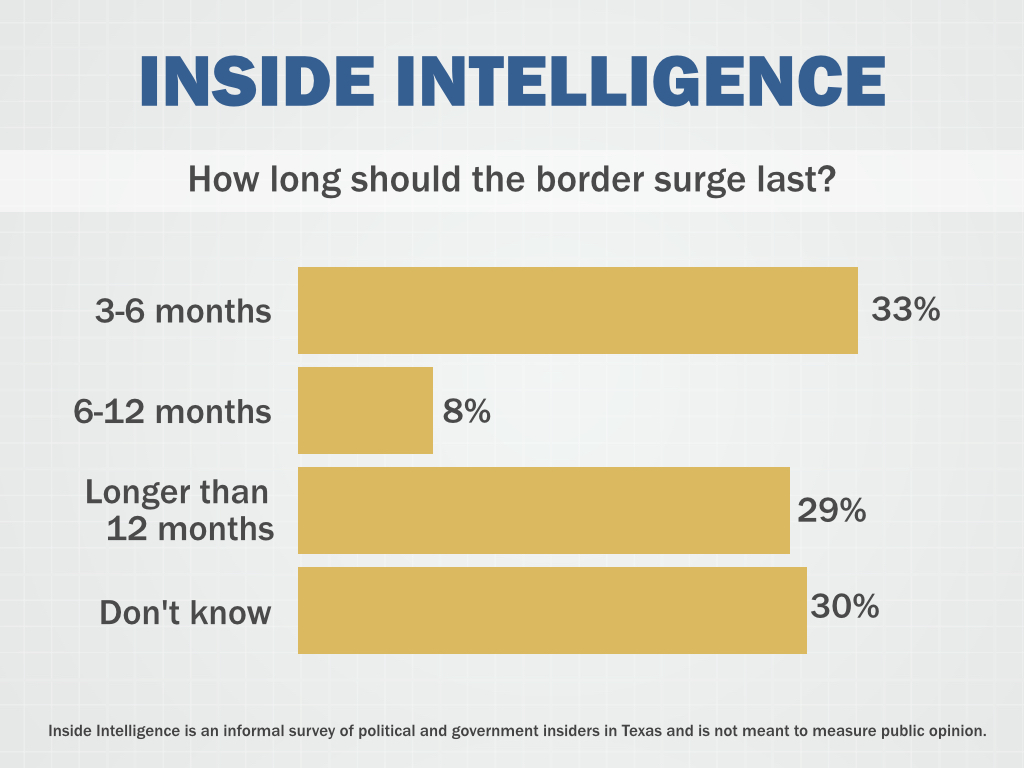 How long should that border surge last?

• "It should last until it's clear that it's no longer needed."

• "The federal government has enough border patrol. There is no need to Texas to spend money on the border. Use these resources for education."

• "As long as it takes, and send the bill to the federal government. "

• " As long you want to pretend it matters"

• "Until there are no more illegal crossings. "

• "If it works, it should last as long as necessary. To paraphrase General Patton, 'let's not pay for the same real estate twice'" 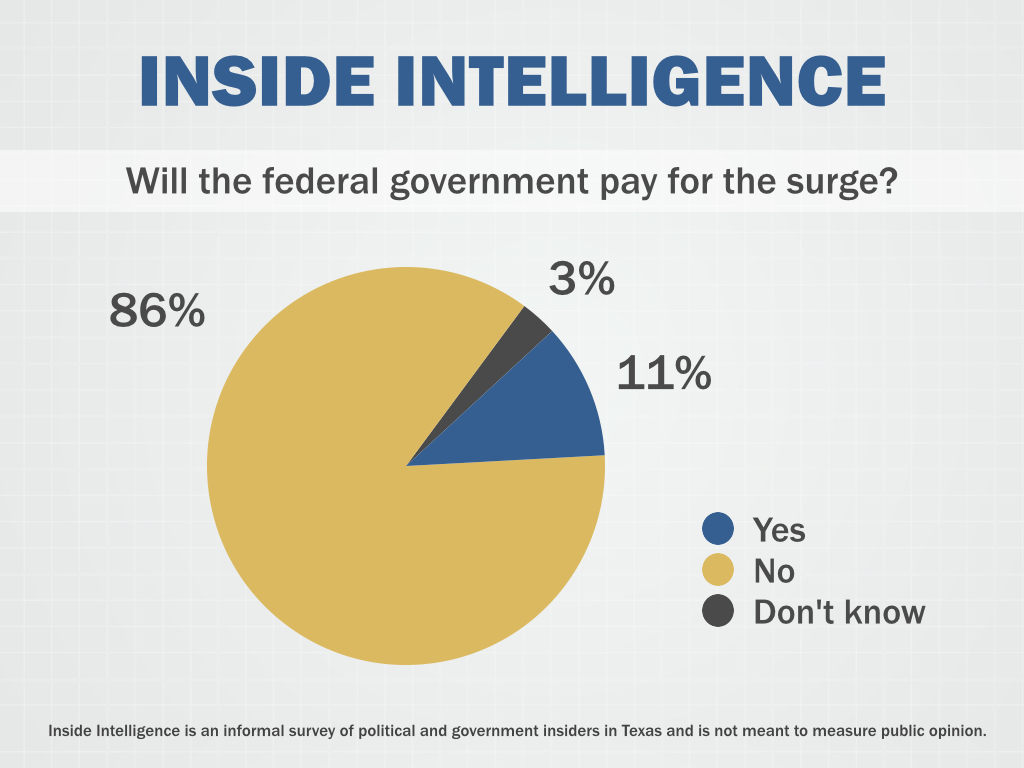 Do you think the state can convince the federal government to pay for the border surge?

• "If the Obama administration was concerned about border security, they would have taken action."