We started with the surplus: 72 percent of the insiders think some of the money should go to transportation; another 64 percent would spend some of it on public education. Nearly half put water on their list of things the money should be spent on, followed by paying down state debt.

Two thirds of the insiders think the state’s business margins tax is in for a revision, but only 3 percent think it will be abolished. And three out of five expect some sort of property tax reform either to appraisals (10 percent), to caps on increases (21 percent), or to both (30 percent). 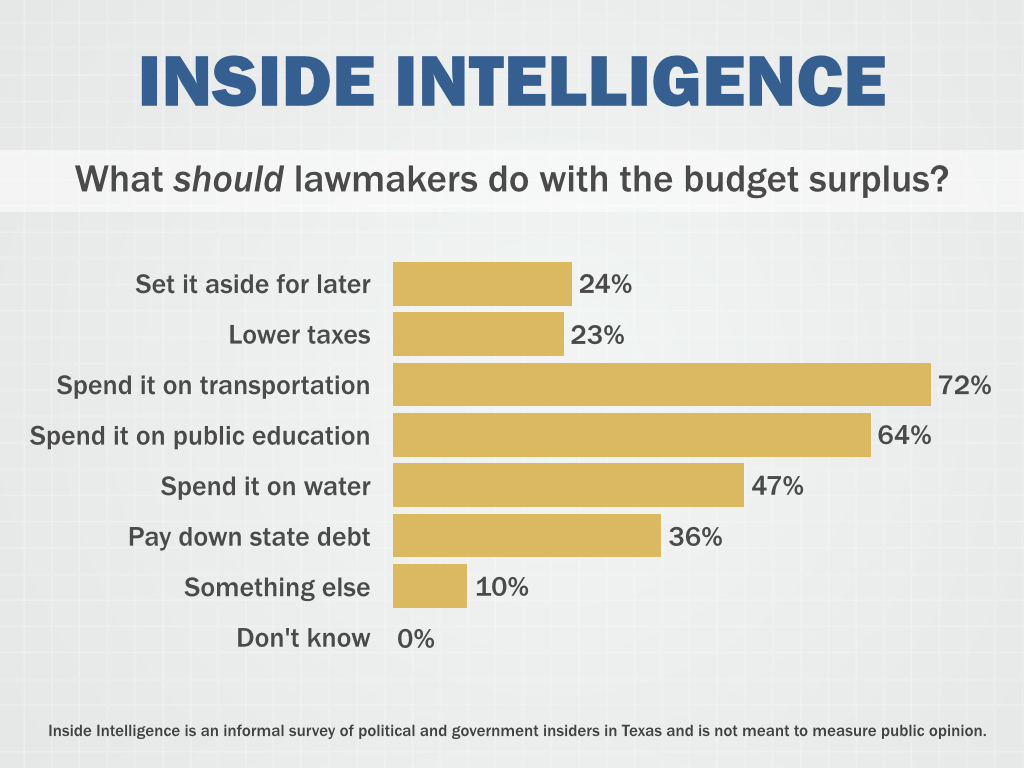 What SHOULD lawmakers do in 2015 with the expected budget surplus?

• "Use it to provide health insurance!!"

• "Don't admit it, but save some for the school lawsuit."

• "State employee retirement which has been underfunded for years"

• "Some attention ought to be paid to both higher education and public education this session."

• "They will go for headlines and not priorities, but they don't get it..."

• "Want to know how I know this list was not created by a right-thinking person? There's no option to return the surplus to the people." 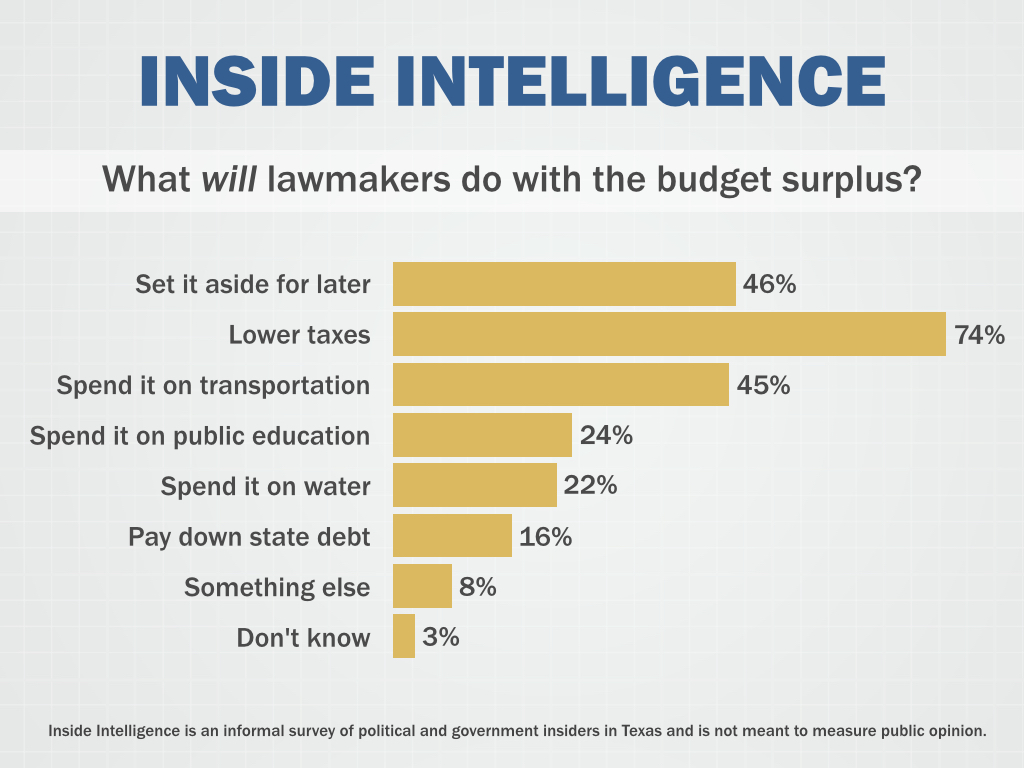 What WILL lawmakers do in 2015 with the expected budget surplus?

• "With oil prices dropping (and everybody knows the so-called 'Texas Miracle' had everything to do with oil and gas and nothing to do with the governor or legislature), the decline will provide an excuse for setting some aside and cutting taxes."

• "The question whether or not there will be tax cuts, it's how much and who benefits"

• "Plummeting price of oil will scare off strategic surplus spending."

• "Lowering taxes is great direct-mail material and let's not forget that the campaigning will start in less than 11 months."

• "They'll do tax breaks nobody will notice and pay down debt that costs almost nothing." 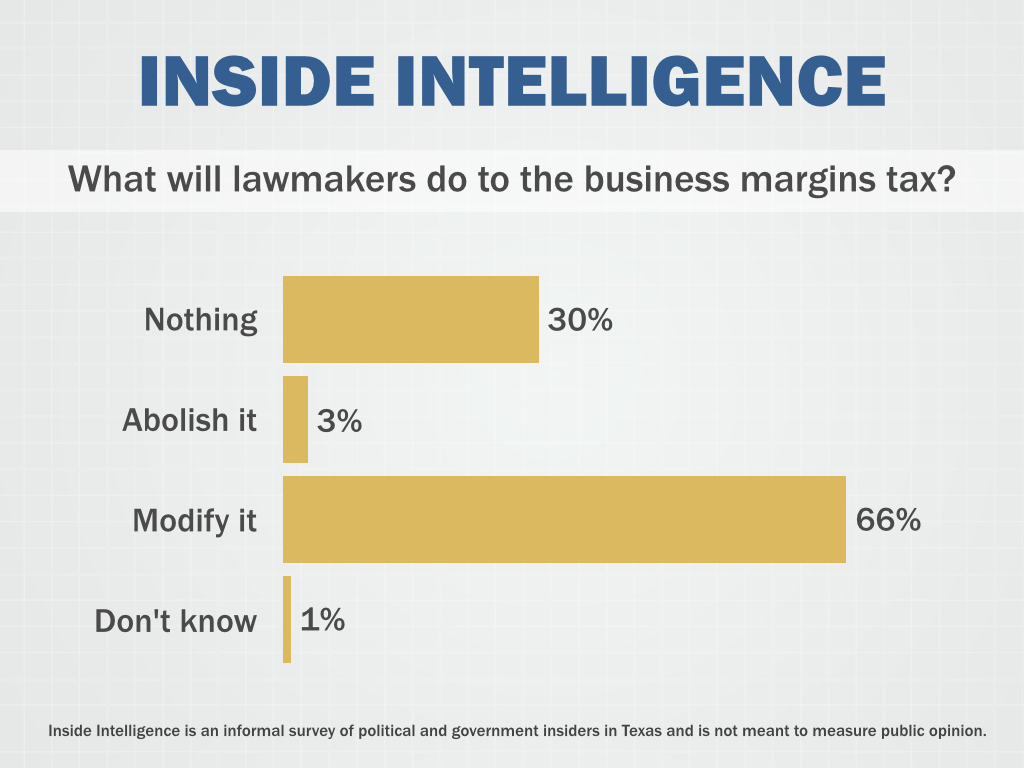 What do you think the Legislature will do with the business margins tax in 2015?

• "If they can afford it and lower oil prices don't give them the yips they could abolish it, but they will probably only reduce the rates."

• "There will be a lot of talk about abolishing it but no agreed upon course of action. "

• "Yap yap yap talk talk talk and nothing in the end, maybe some window dressing" 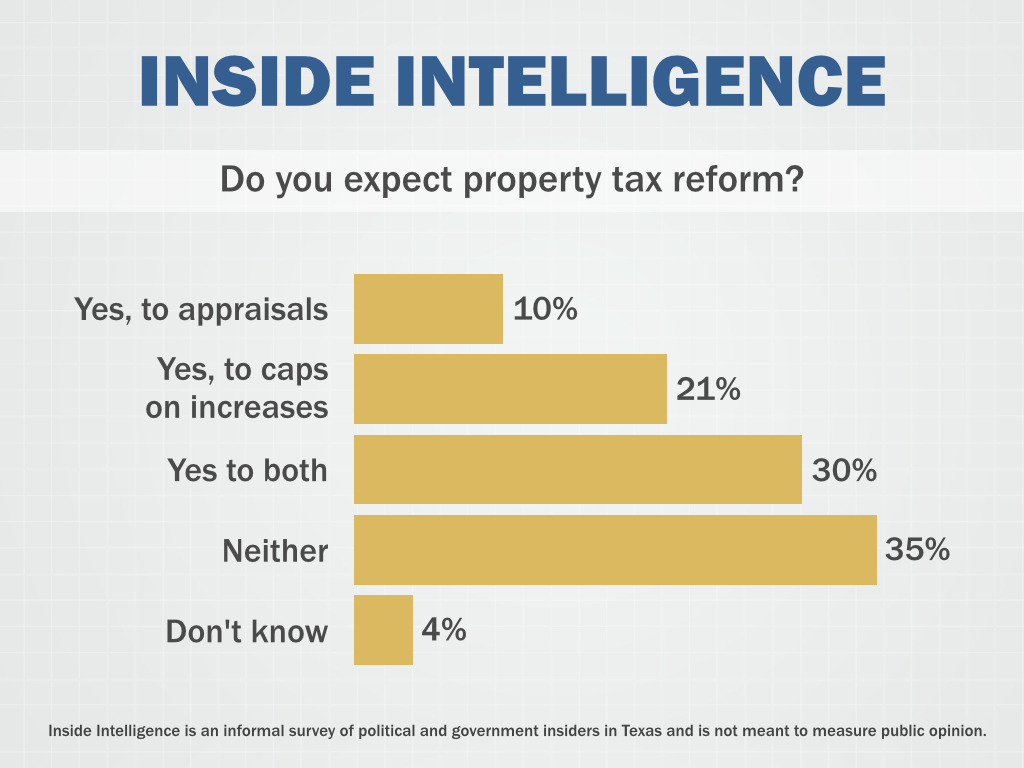 Do you expect major property tax reform this session?

• "Hopefully something to get downtown office buildings on the rolls at closer to real market value. Plus increasing the school tax homestead exemption. And giving local governments the option of a flat-dollar-amount homestead exemption, instead of (or along with) a percentage exemption. It's been a hot issue in the Austin mayoral race. But bad things could happen too, like a lower appraisal cap or stricter rollback rules."

• "Appraisal caps may be irresistible, even if inadvisable. Common folks back home want that."

• "Too complicated, too many moving parts and too many with a stake in the outcome. While the system is archaic to be sure, our process and institutions are simply not built to deal with it at a meaningful level."

• "It's Patrick's #1 issue (well, behind Border Security...and education) so I expect the Senate to do something. I think the House is also likely to do something, but the trick question is whether the House and Senate will agree on what the property tax reform might look like."