WEST – Side-by-side, Texas Gov. Rick Perry and Bohuslav Sobotka – the prime minister of the Czech Republic – dipped their shovels into a mound of Central Texas dirt and gently flung it forward.

Officially, under Thursday’s clear skies, the chief executives broke ground for a new gymnasium about 20 miles north of Waco. But to the roughly 100 folks gathered here, the colorful ceremony represented far more. It was about a town’s rich traditions and effort – still going after 19 months – to pick up the pieces wrought by disaster.

“Community is what helps us through tragedies. It’s those shared experiences — that shared pain – where we find solace and strength,” Perry told those standing where Sokol West gymnasium and Lone Star Hall – the backdrops of many town memories  – stood before an explosion at West Fertilizer Co. plant blew a hole through town, killing 15 people, wounding more than 200 and leveling homes and businesses. “This is a community that has responded appropriately, strongly, proudly.”

Of the roughly 300 homes damaged in the blast, 115 were demolished. Many buildings are still under construction, or will be soon.

“The rebuilding of West is a marathon, not a sprint,” said Mayor Tommy Muska, his oft-repeated post-disaster refrain.

That effort includes rebuilding the gymnasium, which will once again house the Sokol Gymnastics Association of West, one of 34 North American clubs that seek to uphold the “sound body, sound mind” credo of a movement born more than 150 years ago in the Czech lands. Sokol (which means “falcon” in Czech) involves training in athletics – particularly gymnastics – and family oriented activities. 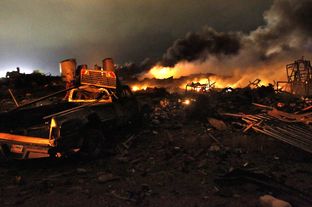 Enlargephoto by: Mike Stone / Bay Area News
A vehicle near the remains of a fertilizer plant burning after an explosion in West, Texas, near Waco.

“Sokol wasn’t just a gym,” said Israel Veselka, whose five children – the oldest is 21 – have all participated at various times. It was a social center, he said, where the kids would gather to do crafts, watch movies and play games.

Before the blast, the West group had about 60 members. Without a permanent home, the group’s numbers have since dipped a bit.

“This is a historical moment,” Veselka said after watching a high school history club dance traditional Czech waltzes and listening to Perry, Sobotka and others speak of resilience and rebirth.

“This community has an amazing soul, and it’s been on display for some time since the tragedy here occurred,” Perry said.

Sobotka through, a translator, praised the town for its “courage" before tapping an oversized gavel onto the gymnasium's cornerstone engraved with the Czech message "Byli jsme a budem" – "We were, and we will be."

Some of West's courage emerged right on this spot that April 17. After Lone Star Hall’s roof collapsed and the gymnasium’s windows blew out, this briefly served as a staging area for the injured – before a gas leak prompted ambulances to move them down the road.

Charles Hutyra, who lives five miles southeast of town, said he was among those who rushed in after hearing the blast, and helped wheel elderly folks away from the nearby nursing home before it blew.

“It was a pretty bad mess,” said Hutyra, who lost two hunting buddies in the disaster.

The $1.2 million needed to rebuild the gymnasium came from insurance money and a hodge-podge of donations, including help from the Czech republic’s government. If the town raises enough money, it will build an addition to replace Lone Star Hall, where half the town’s weddings or receptions took place, folks here figure.

That's where Emil “Sonny” Fridel, 91, met his wife Pearl in 1945 when he returned to the states after serving in the U.S. Army.

“There was a pretty girl sitting there and we danced a time or two,” he said while sipping coffee at the Village Bakery, known around Texas for its kolaches. “I came back a month later, and there she was.”

They married two years later and stayed together until Pearl’s death three years ago.

When the blast tore up that hall of memories? “That was tough,” Fridel said.