For this first episode of Inside Intelligence after the general election, we went for commentary over statistics, asking our insiders in politics and government what surprised them most about the results and what directions the voters seemed to be giving about the coming legislative session.

Finally, with state Rep. Mike Villarreal saying he will run for mayor of San Antonio and will not serve the legislative term he won last week, and with state Sen. Leticia Van de Putte spending a few days mulling that same race after losing her bid for lieutenant governor, we asked who would win a head-to-head between the two. The insiders favor Van de Putte; 74 percent said she would win.

As always — and especially, this week, what with the open questions about the elections — we collected verbatim comments along the way. A full set of those is attached. Here's a sampling:

• “Be a pundit: What (if anything) about the general election surprised you the most?”

• “Turnout. Shockingly bad. The canary in the coal mine. A backlash is coming.”

• “How badly Battleground Texas did. A big nothing burger.”

• “The Democrats did worse than before. Didn't know that was possible.”

• “Despite their pedigree, their press clips, their confidence and their 8-figure budget, Battleground Texas has no clothes.”

• “I am surprised at what a dismal failure Battleground was, no matter which metric you use or that they decide to use this week.”

• “Republican gains among the Hispanic vote.”

• “The fact that Democrats turned out almost 300,000 fewer voters. Tell me again, what did those consultants get paid all that money to do?”

• “Biggest surprise was the utter ineffectiveness of Battleground Texas. All that money and they lost voters, carried counties the Ds would have carried anyway, and managed to bungle things enough that Abbott won Bexar County.”

• “That Wendy Davis underperformed Tony Sanchez, That Greg Abbott won 44% of Hispanics, That the GOP will have 98 members of the House, That Will Hurd won TX-23”

• “Be a pundit #2: Looking over who got elected and what they said on their way to victory, what do you think will be the top one or two issues of the session (other than the budget)?”

• “The budget and don’t forget the budget”

• “On campaign rhetoric alone, I guess they'll be spending time getting answers on that damn ISIS prayer rug some unknown person found in an unknown spot. Apparently the polls reflect that's a bigger concern than sitting in traffic, providing great education or even having a nice ice-cold clean cup of water in the summer.”

• “Whether to spend the surplus.” 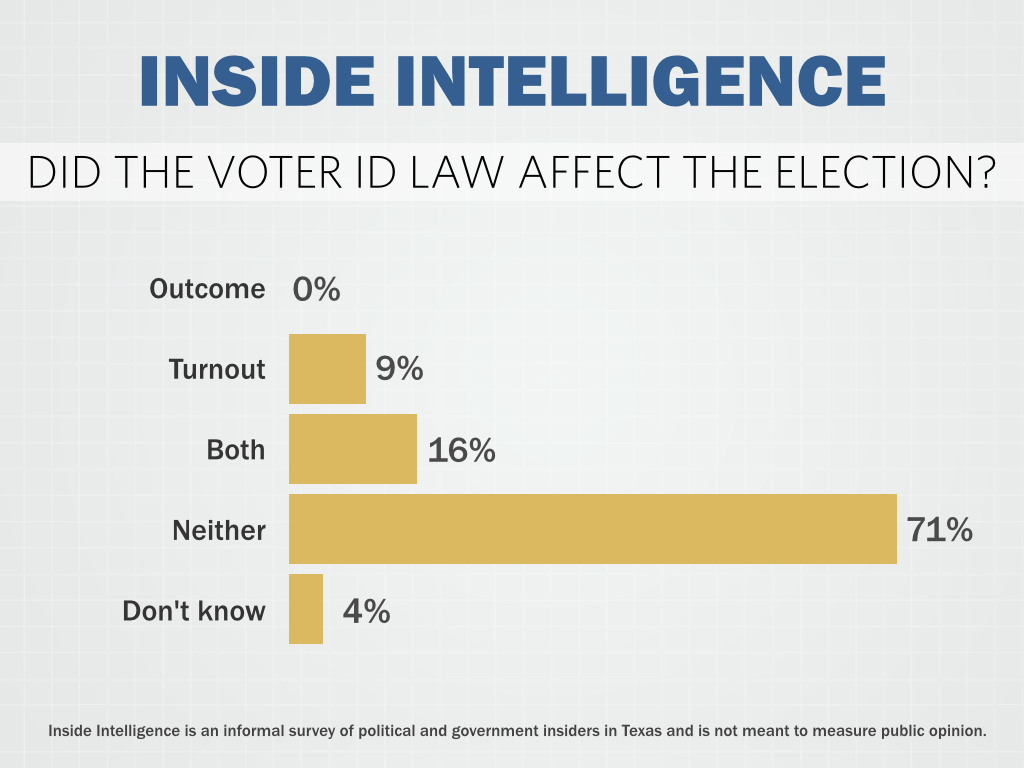 • “Do you think the voter ID law had any effect on either the outcome or turnout in the general elections?”

• “I think that for new voters, the confusion between voter ID and not using an ID to going back to requiring a voter ID may have kept some people home, but not enough to change an election.”

• “The impact was minor, though not zero, but the election was decided on a lackluster campaign and low turnout.”

• “Dallas is as corrupt as ever. Lacking poll watchers.”

• “Voter ID is now settled. After the elections of 2013 and 2014, the claims of opponents of voter ID have been debunked.”

• “The stupidity of the discussion and the silliness of the issues is what depresses turnout.”

• “No effect. None. Nada. Zilch. Anyone using this as an excuse for Election Day results is a Democrat compiling a list of everything to blame other than bad candidate, bad message.”

• “Be a pundit #3: Do you think Republican candidates would have done as well as they did had more voters turned out? Put another way, would Democrats have done better than they did?”

• “Different types of Republicans (i.e. more traditional types) would have been elected in primaries and Dems would have had moderately better results but still would have lost all statewide elections.”

• “For the past 15 years it’s been a 60-40 split benefiting the Republicans. Democrats have been out of touch with the general public. They don't seem to understand what it is the voters want out of politicians. Leaning so far to the left is only going to isolate the Ds and make them a niche party - that doesn't win elections. I'm not saying the Ds need to move up on the dial, become more mainstream, but at least find out what it is the voters really want out of their government.”

• “Texas is conservative state. D's with a national message will always have a problem here.”

• “Come on. Do you think Texas would have beaten Oklahoma if Texas had scored more points. The outcome of every election is determined by turnout. Part of what you do to win elections is to get your voters to turn out and convince the other side's voters not to bother. More voters could have meant more votes for Democrats or it could have meant the Republicans victory margin would have increased to 30 points. There is simply no way to spin this to support the Democrats. They lost it fair and square.”

• “Democrats would have done better.”

• “Maybe the results would have been a few points closer but no change in results.”

• “It would not have mattered”

• “Phrased a third way, 'could Democrats have done any worse?' I think the answer to that is no.” 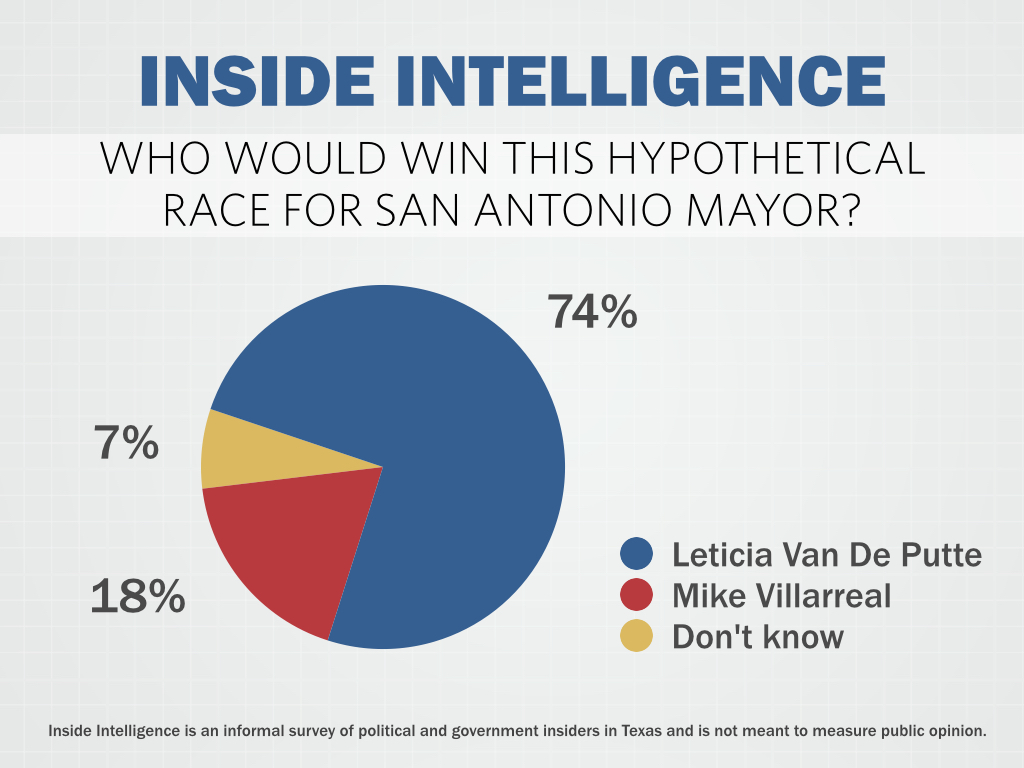 Bonus pundit question: Who would win a race for mayor of San Antonio between Leticia Van de Putte and Mike Villarreal?"

• "Everybody's money is on Van De Putte but Villarreal has a better record and is a good campaigner. Its a mistake to cut him out. "

• "Higher name ID and longer history serving the needs of the city. She can point to her wealth of experience and examples of solving problems. She'd make a great mayor."

• "Mike actually has a good grassroots network, at least in his own district, that presumably he has been trying to replicate citywide since he announced his intentions months ago."

• "He's got most money people lined-up and has been working it hard. "

• "Not even close, really. She is really the archetype for a SA mayor. Mike's advantage would be in his organizational skills, which are formidable."

• "Van de Putte has been a tremendous positive force for the San Antonio community in the legislature for more than two decades. Villarreal is thoughtful but has been much less impactful during his legislative career. Van de Putte is everyone's friend and she connects with people in a way that underscores compassion mixed with pragmatic problem solving. Villareal is more philosophical, a deeper thinker, but Van de Putte can hold her own with anyone on any issue as she has repeatedly demonstrated over the years."

• "It would be best for San Antonio if neither of these inadequate candidates is the ultimate winner. "