With a new set of officeholders coming into every one of the executive positions on this year’s statewide ballot, we asked our politics and government insiders about how things are going and what is likely to change with new people in charge.

The insiders expect the executive branch and the House to be the bright spots in state government when new people take over; 73 percent expect the new state Senate to be the dark spot. 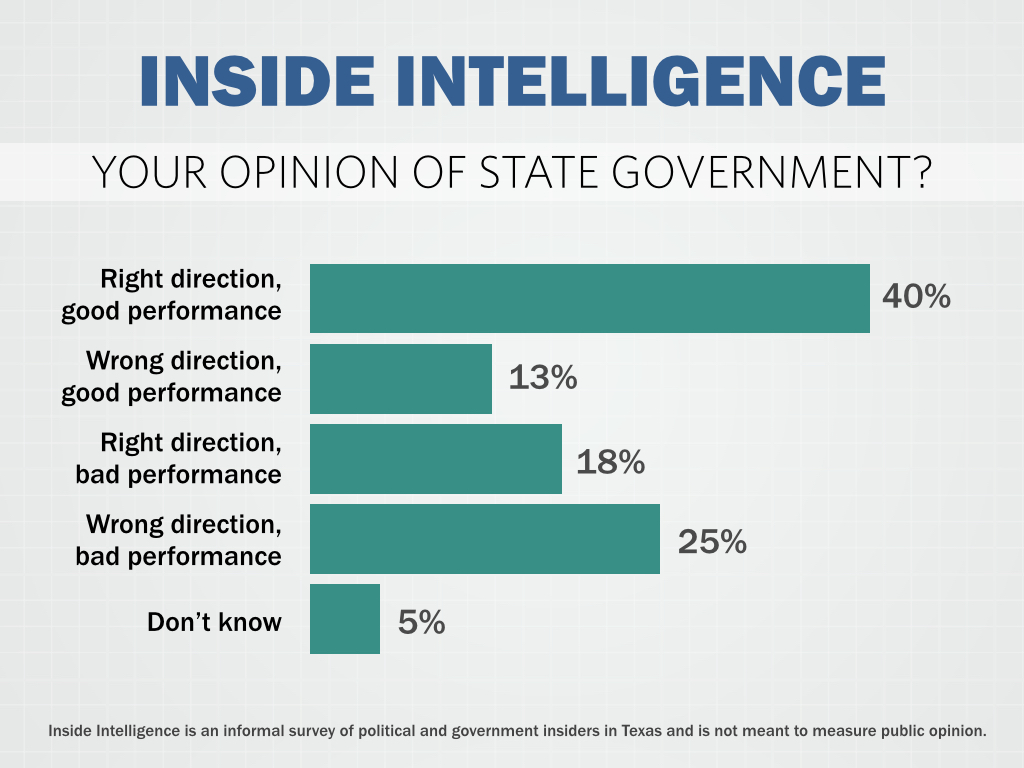 What do you think about the direction and performance of the state government right now?

• "The state must be doing something right because all these folks keep moving to Texas. But when I think about issues folks care about, I'm left with the impression the state could/should do more. For example, road congestion across the state is horrible. We need new roads and we need to better maintain existing roads. Why aren't we building new roads to keep up with growth? Why don't we have funding for them today? Why didn't our leaders foresee this need? State Prop 1 is a drop in the bucket, but it at least acknowledges the issue. What about public education (performance and cost), energy, water, property tax relief, etc. "

• "Government Performance: more or less is operating professionally and to the best of their abilities. As far as direction goes - they can only do what the Legislature tells them to do and that is a mixed bag."

• "Verbal contracts allowing political cronies to get millions in taxpayer dollars, toll roads everywhere but regular roads in horrible and dangerous conditions, state parks are struggling and in disrepair, average state employee salaries still at $51k (since about 1990) but top level salaries have skyrocketed, college and university tuition is out of reach for most Texans, cost of living and percentage of taxes for average Texan is huge for a 'low tax state' -That was just a start."

• "Roads, water, health care and education are just being kicked down the road. State debt has almost tripled in last 12 years, but he local guys get accused of not having their fiscal house in order."

• "Economy is good, but not enough investment of our amazing fortunes in education, infrastructure, and health (including mental health) care." 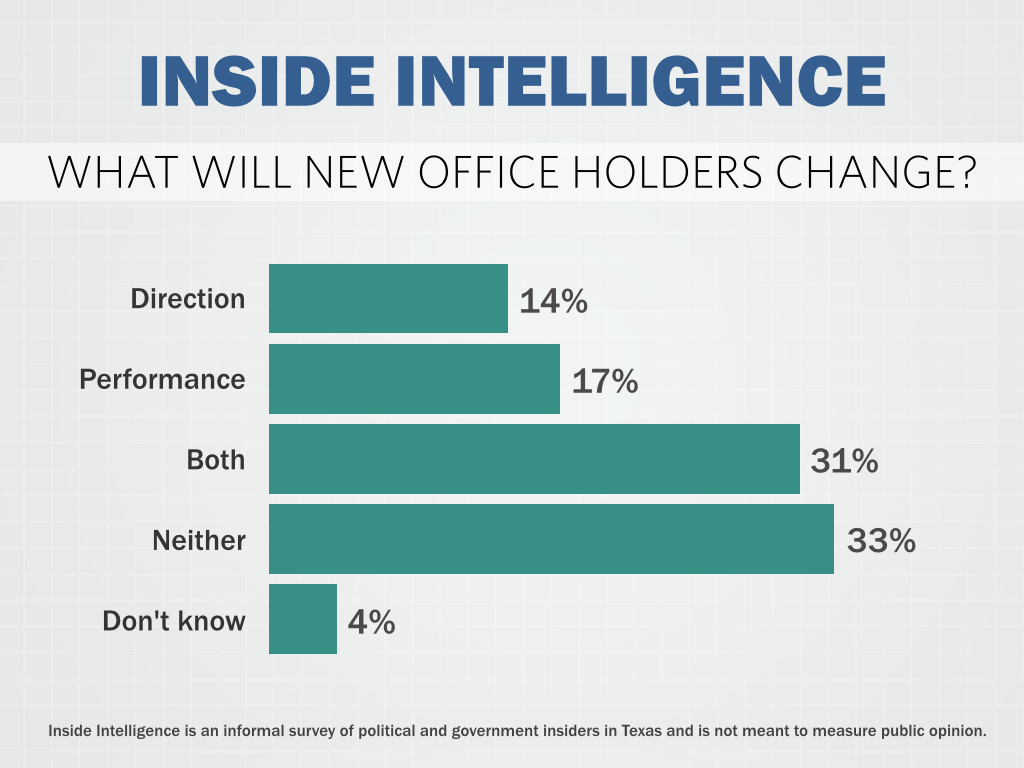 Do you expect direction or performance to change significantly (for better or worse) when new officeholders take over in January?

• "Seems like with the influx of Tea Party members, they are likely to be disinclined to make the investments the state needs to maintain its economic prowess."

• "This is Texas, 'pardna'. Bidness will continue to get bidness done at the capitol. Officeholders sometimes get in the way." 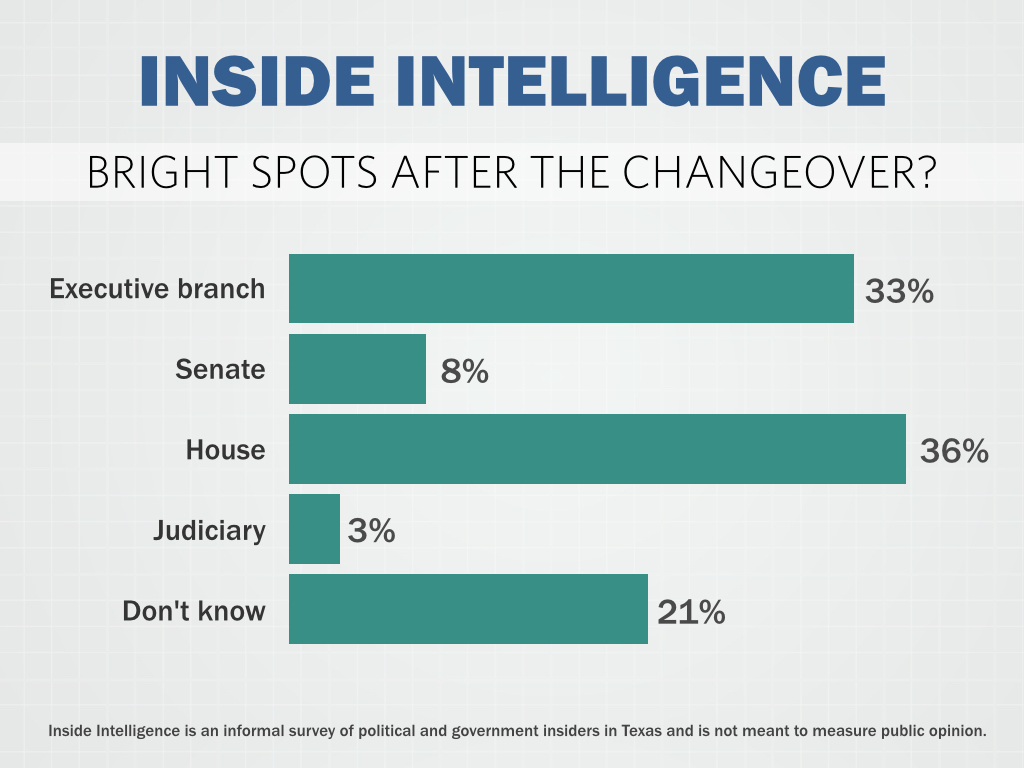 The bright spots after the changeover?

• "For the Tea Party, the bright spot is the huge number of Tea Party senators. For the pro-business folks, it's the adults in control in the House. For Democrats, it's 2018 and beyond."

• "The House becomes the voice of reason. HAHAHAHAH!!!!"

• "There will be big changes in philosophies and personalities. It will be interesting to see how each of the new officeholders direct the agencies and the state, but also exciting to see fresh faces and ideas emerge." 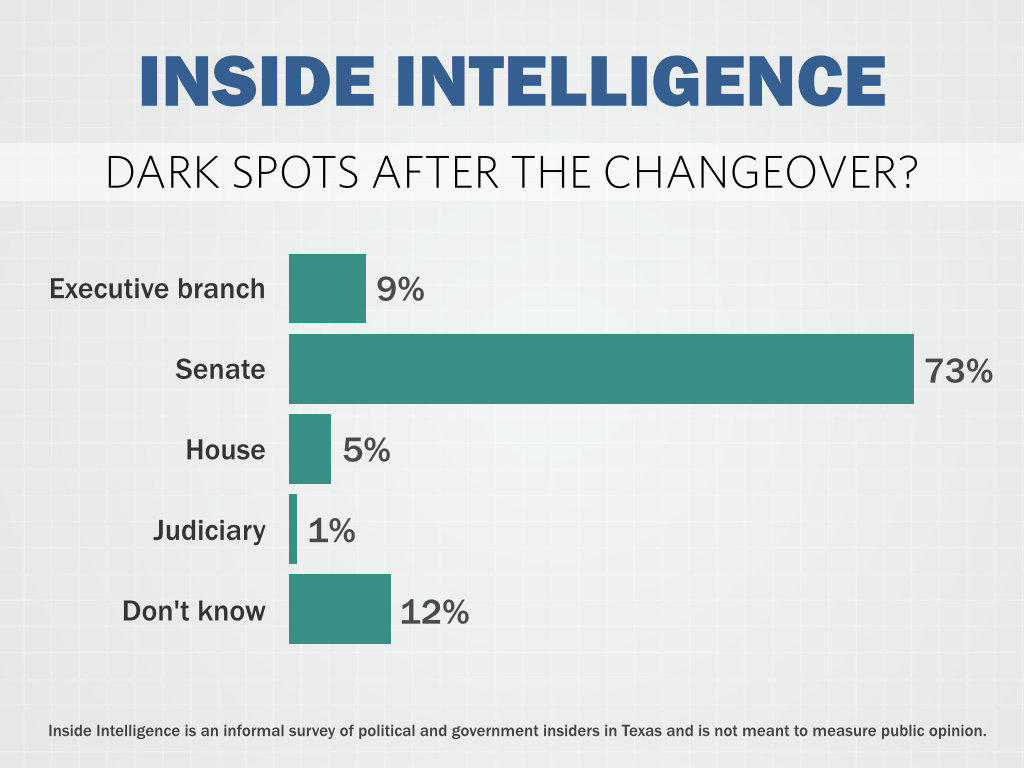 The dark spots after the changeover?

• "This Session will be Speaker Straus' to fashion. Hang on to your wallets!"

• "It won't be long before the Senators are swinging like monkeys from the rafters like the House members. "

• "In DC style, the Senate is poised to go from fixin' to fightin'. What a waste of time and resources."

• "The AG's office will be in a leadership/legal turmoil. "