We went to the insiders this week with the big question of the season, now that early voting is underway: What’s gonna happen?

In our search for conventional wisdom, we did not ask the insiders how they plan to vote but who they think will carry the day.

Not surprisingly, they foresee a Republican sweep in Texas in 2014.

Only small percentages predicted Democratic winners in any of the seven non-judicial statewide contests; the best performers among the Democrats (or the worst among the Republicans, if you prefer) were Leticia Van de Putte, the San Antonio senator running for lieutenant governor, and Mike Collier, the Houston accountant who would like to be the state’s next comptroller. Their opponents are Republican Sens. Dan Patrick of Houston and Glenn Hegar of Katy. 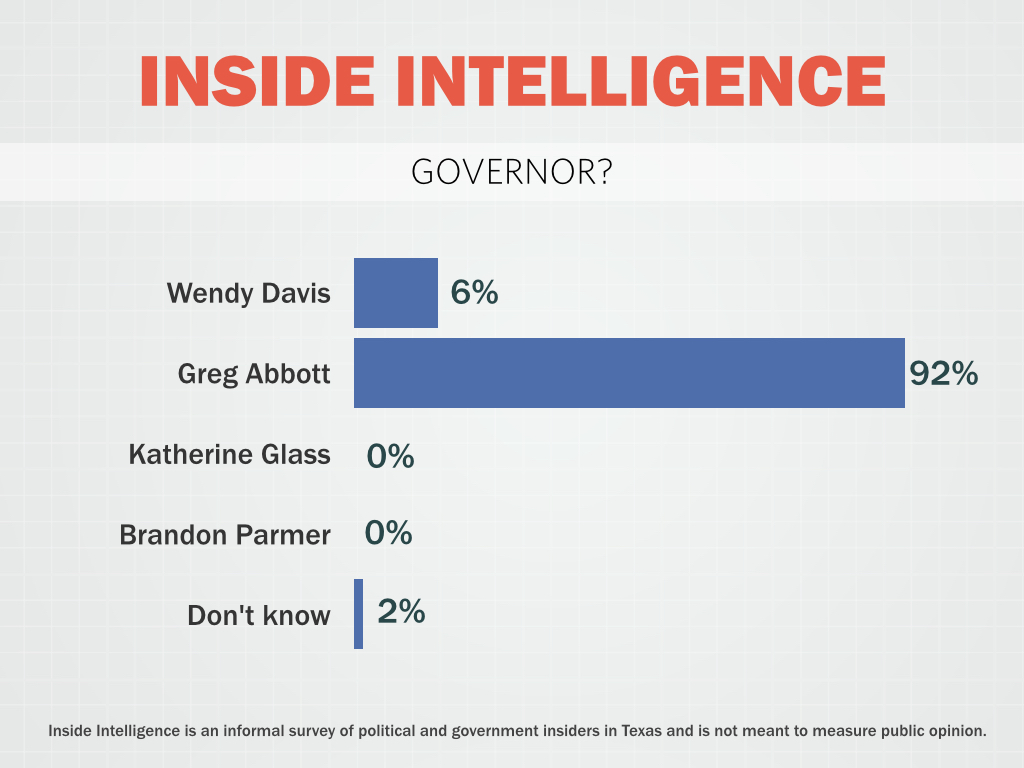 Who will win the race for governor?

• "It's not going to be as close as Democrats would like to think - not this time at least. "

• "What will be Battleground's excuse? It surely won't be lack of money. "

• "Abbott never had to run the race he and his team were prepared to run. Davis and her team ran a race that they'd like to forget. "

• "Another repub sweep. For all of her star power on the East and left Coasts, Davis has run a terrible campaign."

• "You could've saved us time on all of these questions by offering a straight-ticket button--after all, that's what most voters are going to do!"

• "Its a Republican sweep and the Democrats and their allies in the media will respond as if it was somehow unfair -- but its just democracy. Democrats keep trying to win by changing the messenger -- Tony Sanchez, Trial Lawyer Bell, Trial Lawyer White, Wendy Davis -- but the problem isn't the messenger its the message. Texans are not going to vote for big spending, pro-trial lawyer, liberal, abortion on demand candidates, no matter who they are. " 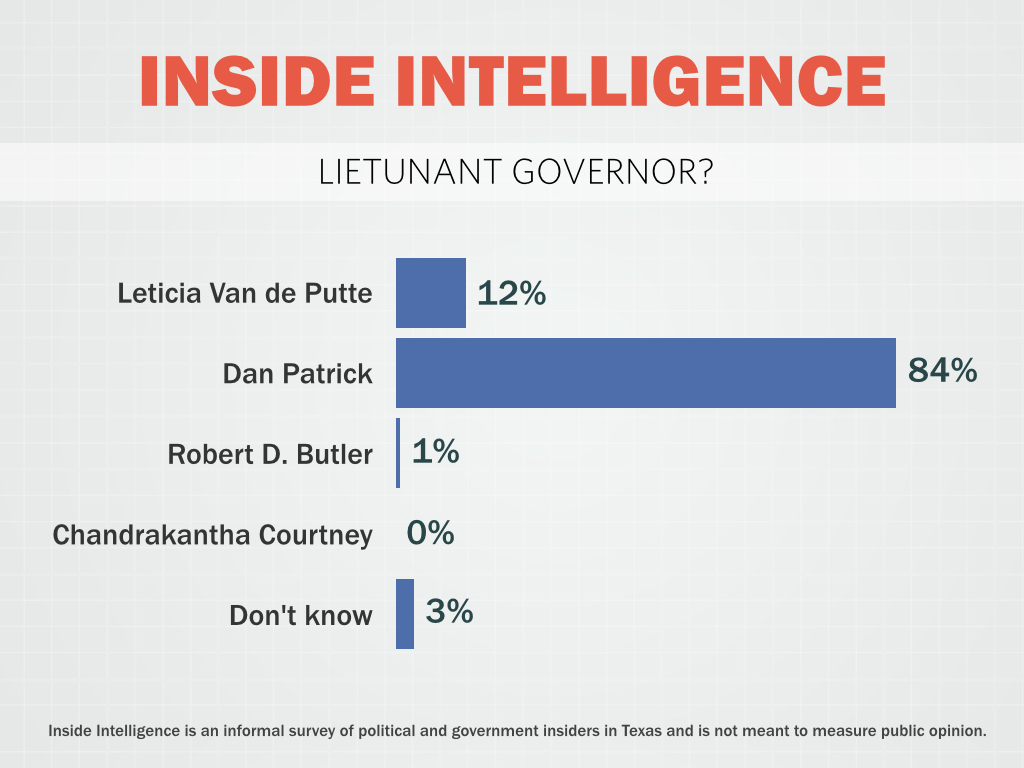 Who will win the race for lieutenant governor?

• "Note to Battleground TX and Hollywood liberals: Next time, study where the levers of power reside in Texas before picking a candidate to fund."

• "Even though the polls show a double digit lead for Dan Patrick, I can't bring myself to check the box beside his name even though this is just a survey. "

• "I'd much rather discuss A&M football on a Monday at the office. "

• "Van de Putte's inability to build any fire and momentum is the biggest surprise and disappointment of the cycle." 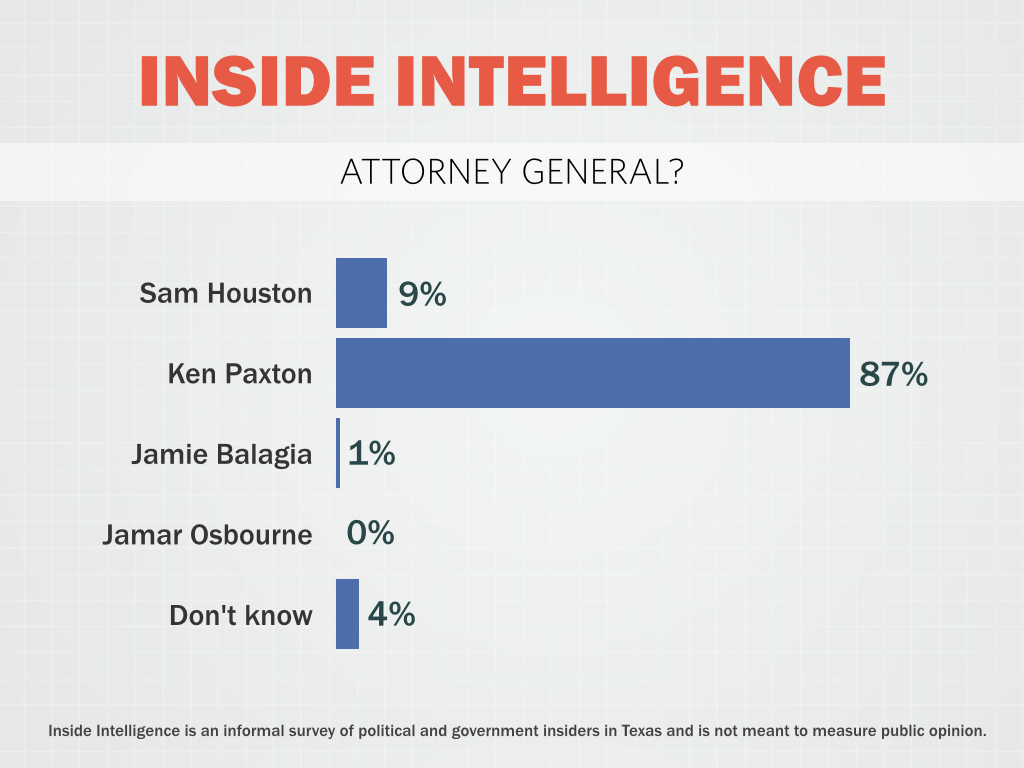 Who will win the race for attorney general?

• "Not sure who will be happier when Paxton wins: The TEA Party or the Texas media who gets to write about his lingering ethics issues."

• "Anybody voting for Paxton is seriously delusional; an electorate that puts party first over felonious activity needs a serious gut check. "

• "Biggest victory by the most unqualified candidate for this job in recent history. D stands for dead. " 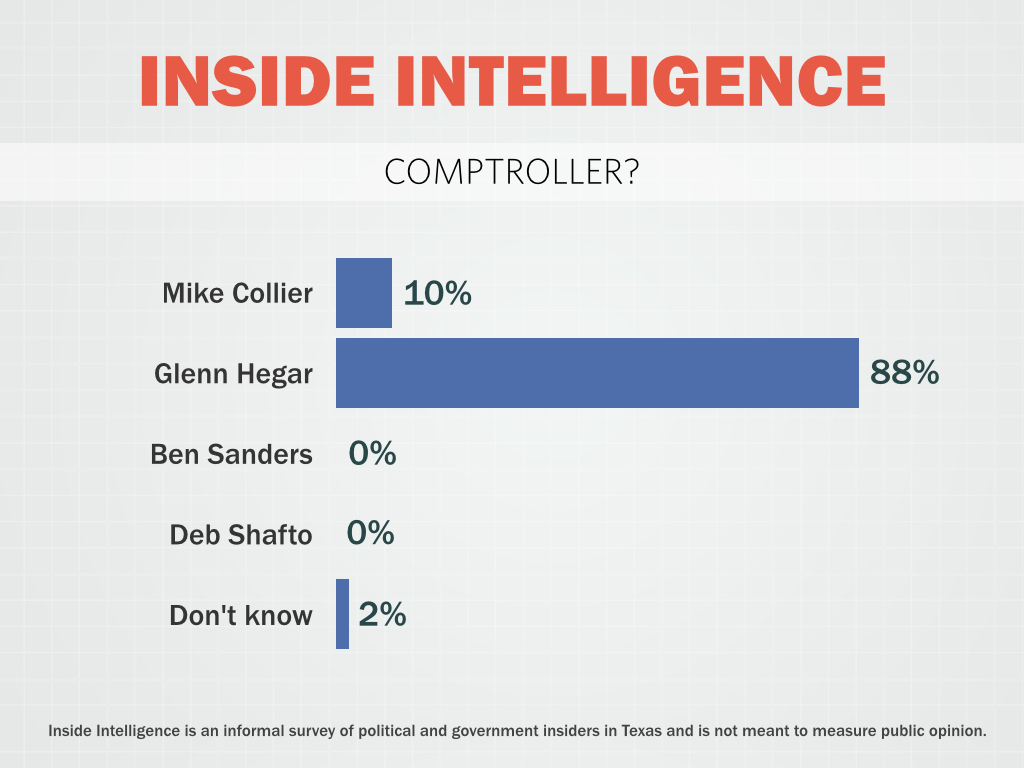 Who will win the race for comptroller?

• "Best qualified candidate on the ballot for either party. "

• "Let's be honest here: Hegar is a political hack with no experience handling multi-billion dollar budgets while Collier is actually a CPA and knows how to crunch numbers, but we find ourselves in a position where, once again, the electorate puts party first over common sense. " 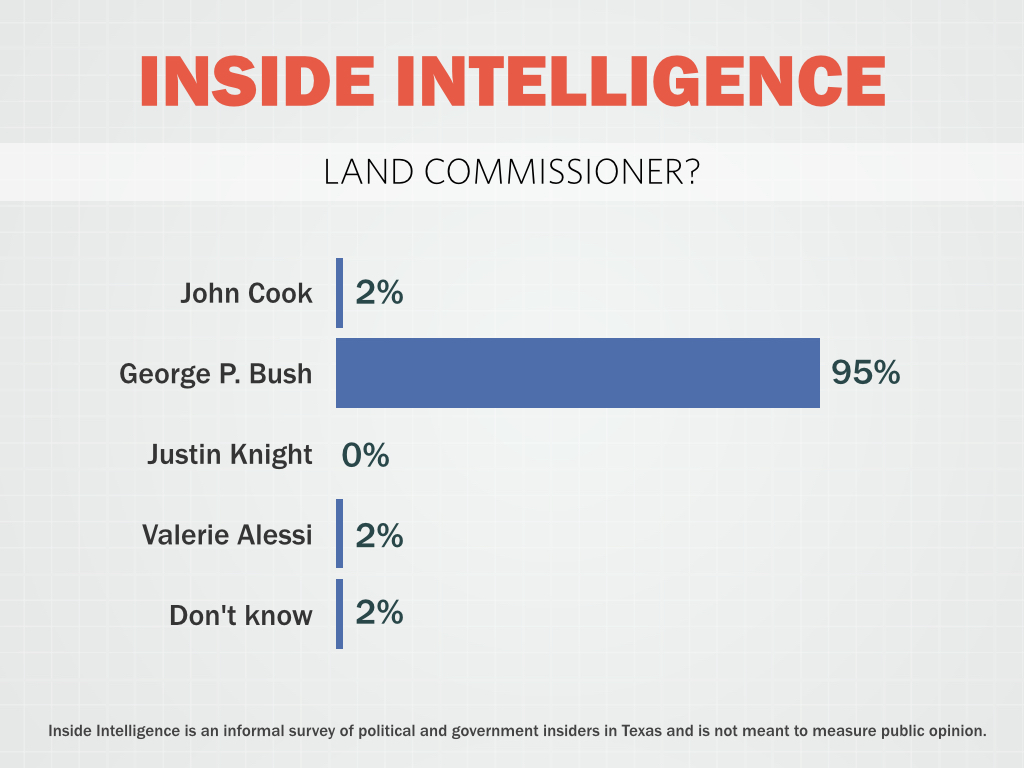 Who will win the race for land commissioner?

• "Didn't George P. already win this seat back in March?"

• "George P was affable enough until he refused to endorse his own father for President. Thanks for the reminder that there is craven. And then there is Bush craven. "

• "Actually like this guy; he's got the money and prestige but he also brings some class sometimes missing from our candidates and definitely a more practical approach as a Republican-Wish he and Straus did more together; maybe they will!" 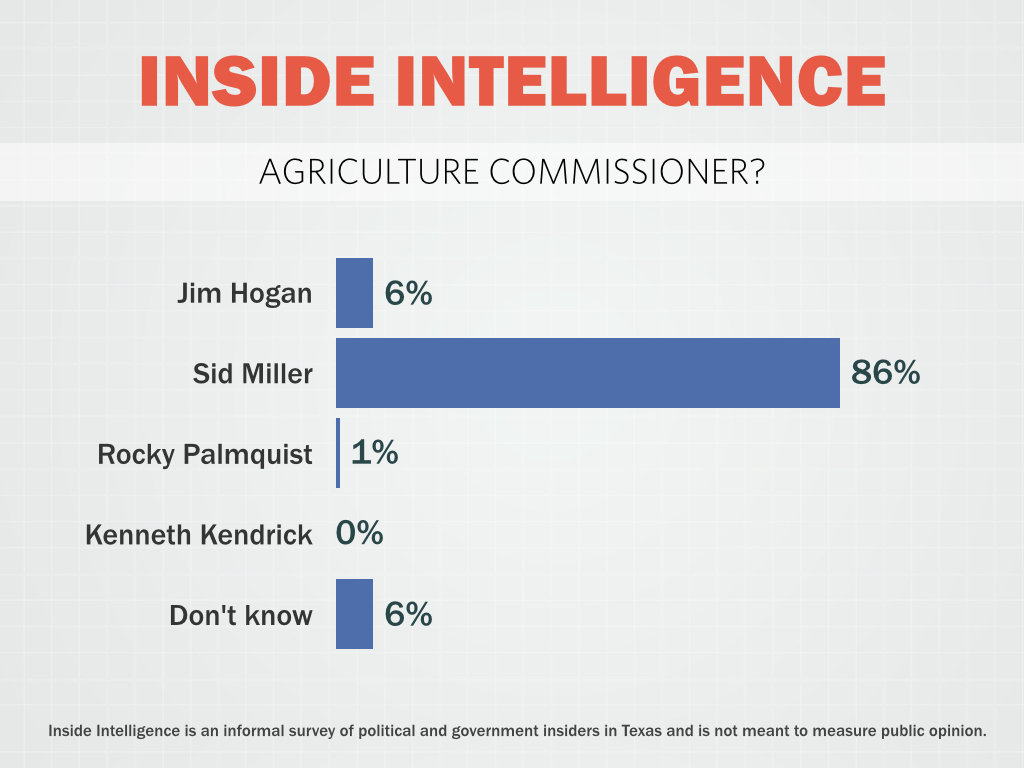 Who will win the race for agriculture commissioner?

• "Sid Miller: Because traditional animal husbandry is between one heifer and one bull."

• "Really? He hasn't really campaigned on the issues and when he does, he doesn't understand what the office is responsible for and appropriations."

• "Finally an Ag Commissioner who can actually drive a tractor." 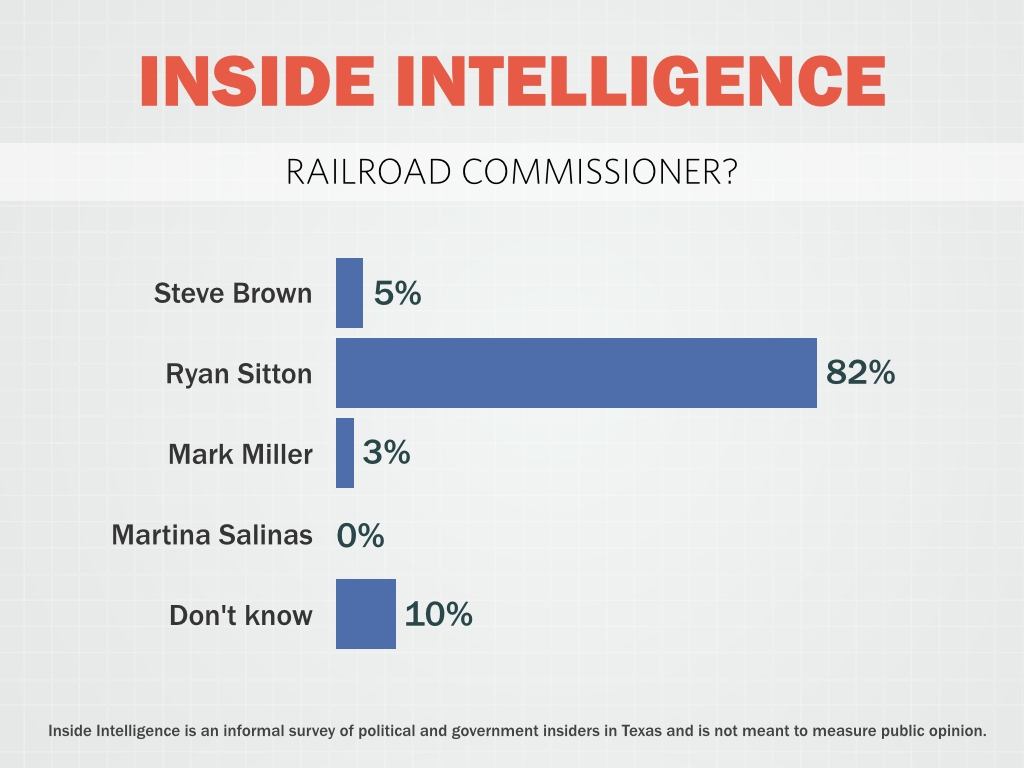 Who will win the race for railroad commissioner?

• "We have railroads? Do they transport oil?"