The uproar over a new television commercial from gubernatorial candidate Wendy Davis prompted this week’s questions for our insiders in politics and government.

Start here: The same number of insiders — 37 percent — characterized this as “just another campaign ad” as called it “fair, hard-hitting.” That said, another 24 percent consider the commercial “offensive, out of bounds.”

As always, we asked for comments along the way and a full set of those is attached. Here’s a sampling: 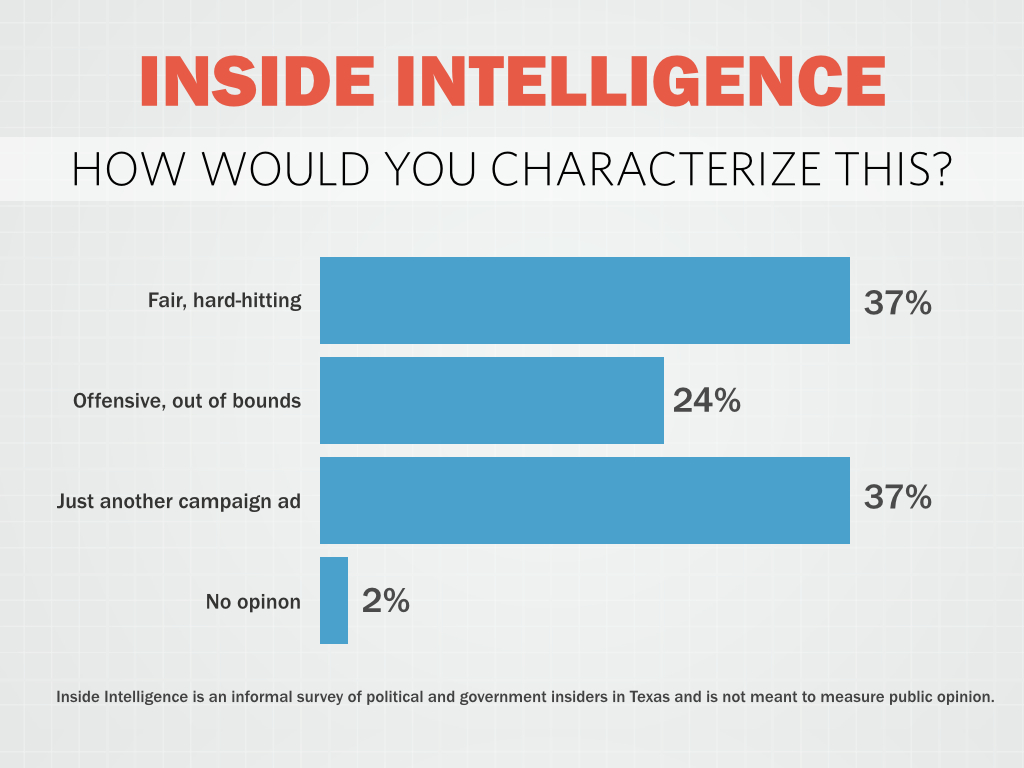 How would you characterize the commercial?

• "This ad evidences a political tone-deafness about Texas voters that has plagued Wendy Davis since her filibuster."

• "The ad poses a legitimate question about Abbott's hypocrisy. The potential for this attack was recognized by Abbott's team, which was ready to call 'foul' on any mention of Abbott's disability. The ferociousness of the Abbott response carried the day with the media, successfully casting the ad as out of bounds. It was not."

• "It's fair, if accurate. It's hard to know how accurate it is without researching it. Most people will probably disregard or discount it."

• "I am sad to acknowledge the answer. Politics and campaigns have been taken hostage by a bunch of mean, hateful operatives who see nothing as 'out of bounds'. "

• "It is a campaign's job to spin any issue that could be harmful to their candidate. The Abbott War Room deserves an award for dominating the media and social media cycles. What should've been an ad against Abbott, turned into a case against Wendy. This cycle has exposed the Democrat's lack of talent in their political consulting sphere. "

• "Everything Davis states is factual. The Abbott camp may not like the facts, but his record is indisputable. During his time as a judge and AG, he has worked to close the courthouse door on many, shredding the Constitution in the process."

• "Abbott uses his wheelchair in most of his campaign ads. What's the difference?"

• "One can't snicker at 'Abortion Barbie' and then be offended by this. I wouldn't have used that image, but it isn't out of bounds."

• "I'm not sure I understand the manufactured rage about this. We see commercials that routinely suggest that candidates hate America, kill jobs and babies, and raise your taxes more often than they breathe air. How is this ad any different?" 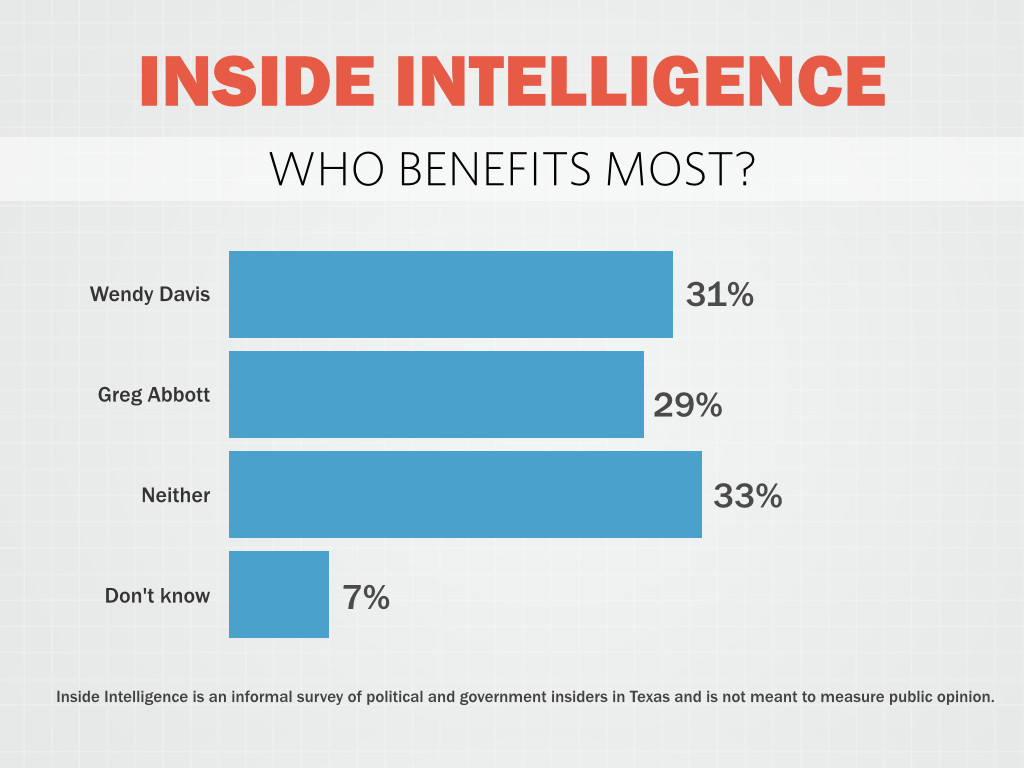 Who will benefit most from the ad?

• "Outcome of the race is not really in doubt, only the margin."

• "And the Dems were already concerned about low voter turn out on their side. This does not help them."

• "Most voters are not as hardened to this type of attack as your audience. "

• "Wendy Davis and the Democrat campaign this cycle has been about turnout, claiming that 'Texas is not a red state, it's a non voting state'. Negative ads are designed to depress turnout and the Davis campaign is running almost exclusively a negative campaign. Just another example of how the Davis campaign says one thing but does another."

• "Texans have a history of turning out in bigger numbers because of such lies told in campaigns."

• "The negative play around the ad probably makes little difference with the voters, but it has hurt Davis with the national press in a meaningful way. The national press viewed this as a Hail Mary effort by Davis and an admission by her campaign that she is losing the race by a large margin. " 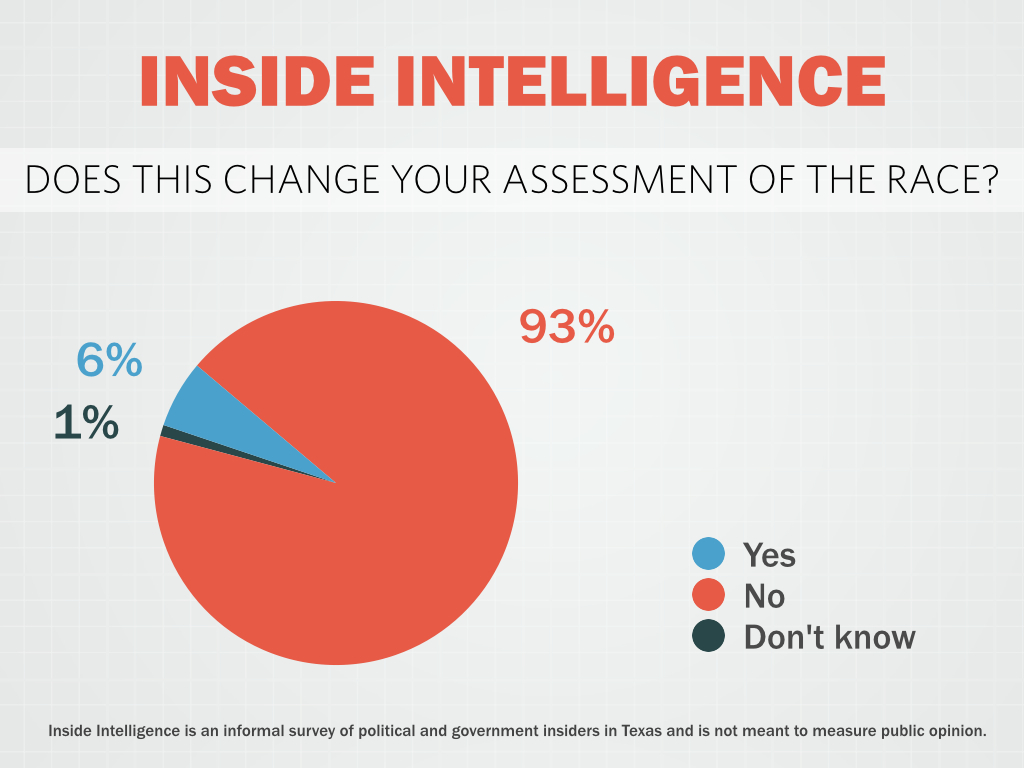 Does this change your assessment of the race for governor?

• "Davis is still going to lose but the pundits on Left (Beckel, Mother Jones, MSNBC....) will now blame it on this instead of the fact that Texas voters don't like where she stands on the issues. Clever?"

• "Any insider that still believes there are independents out there who are still undecided should find a new line of work."

• "Yes, if this is sign of things to come from the Davis camp. This is the most fight they've shown in 12 months."

• "Slightly - the fact that Republicans and the Abbott campaign responded quickly and aggressively means they sense the potential for this turning what seemed to be a positive into a negative for their candidate. "

• "It means Abbott likely up by more than people think and Wendy's team is really more nasty than I thought."

• "It got ugly in October just like it always does. " 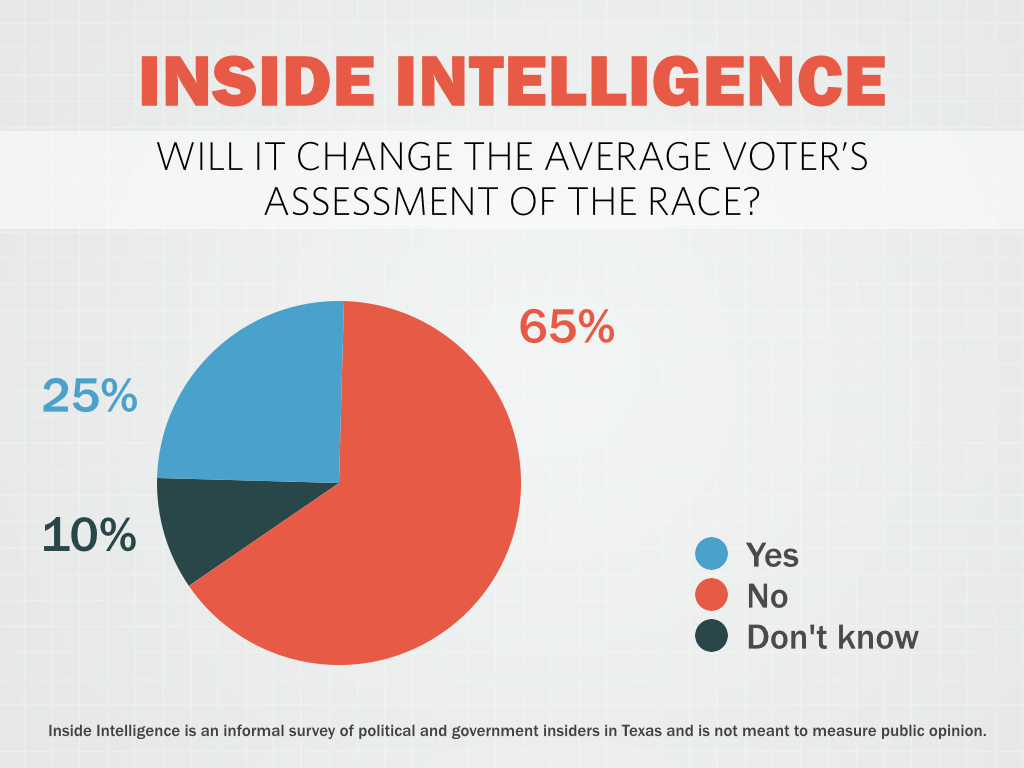 Do you think it will change the average voter’s assessment of the race for governor?

• "No effect. To change the average voter's assessment, average voters would have to be paying attention. And they ain't. This is a non-story except for the one-half of one percent of the population that live, eat, and breathe politics."

• "Most people will probably disregard or discount it."

• "The average voter will vote by party, not by candidate."

• "As a longtime teacher of political marketing, one ad rarely changes a race, but every now and then o ne does and this has some potential as it is getting much play in the free or earned media which magnifies the impact."

• "Again there is this big disconnect; not enough money and quite frankly I believe the folks outside of Austin are just not mad...the economy is great; folks have jobs; money coming in - life is pretty good in Texas."