The closest race for Texas governor in the last 20 years was George W. Bush’s 7.6 percentage-point win over Ann Richards in 1994. The biggest win — or worst loss, depending on your politics — came four years later, when Bush beat Democrat Garry Mauro by 37 points.

If you look only at the two major parties, Rick Perry won his three full terms as governor with margins of 18, 9 and 13 percentage points, respectively. But in a couple of other contests at the top of the statewide ballot, the Republicans have increased their margins over Democrats in each election during the last two decades.

It’s a steep hill the Democrats are climbing this year. It’s not that they can't win — just that they're working against a deeply ingrained voting pattern. Republicans not only swept every statewide election starting in 1996, but their margins have been growing steadily. 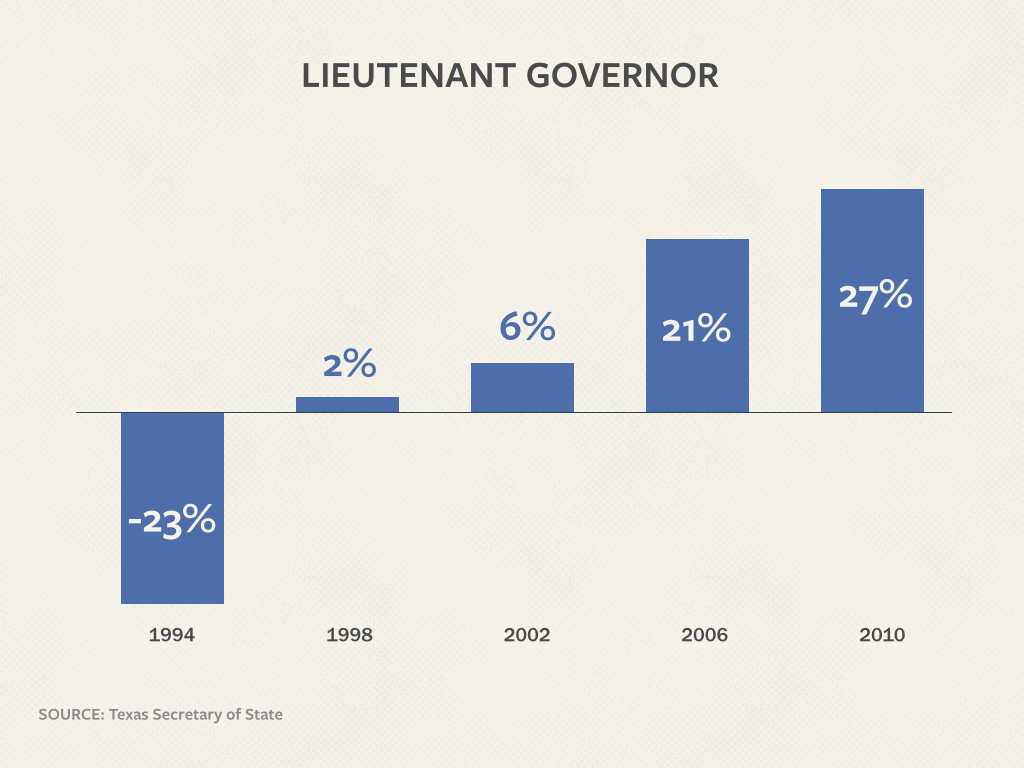 The margins in the top four state races on the ballot every four years — when state offices are on the ballot — have increasingly favored the Republicans. The average Democrat outdid the average Republican by 9.2 percent in 1994, when Bush was winning the governor’s race as his Republican ticket-mates were losing the races for lieutenant governor, attorney general and comptroller.

In 1998, a Republican sweep year but one with remarkably close races for lieutenant governor and comptroller, the average GOP win margin in those top races was 12.4 percent — more than a 20-point swing in four years and a number driven up by the wide margin in the Bush-Mauro race.

Four years after that, the gap had widened to 18.7 percent, even though Perry mustered only 39 percent in a re-election campaign that drew challenges from Democrat Chris Bell and independent candidates Carole Keeton Strayhorn (now Keeton) and Kinky Friedman. The two independents combined for more votes than the Democrat in that peculiar election. 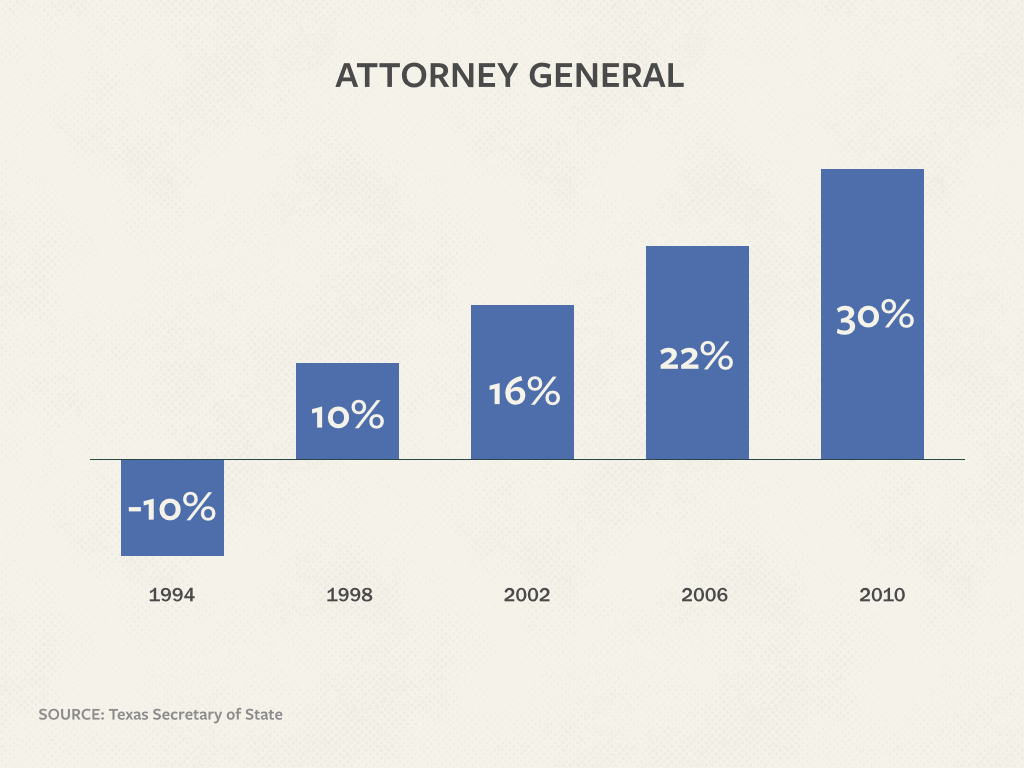 The Republican advantage reached 23.3 percent in 2010, in spite of the fact that Democrat Bill White ran stronger than any gubernatorial candidate from his party since Richards’ unsuccessful re-election bid.

Democrat Wendy Davis has never been on a statewide general election ballot, but her Republican opponent in this year's race for governor, Attorney General Greg Abbott, has won his three elections for that office with margins that were better than the candidates above him on the ballot in all but the 2002 race. 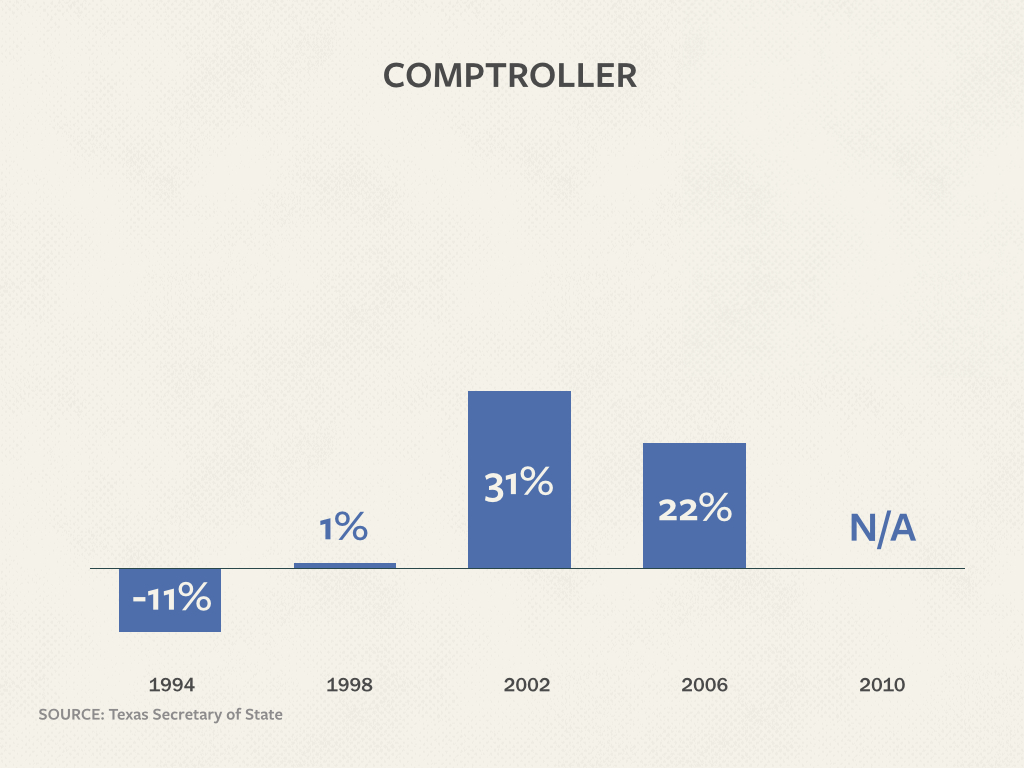 Democrats have received at least 40 percent of the vote in three of the last five elections for governor; White got 42.3 percent four years ago — a recent high mark. But their candidates have lagged seriously in statewide races a couple of notches down the ballot. In 2006, none of the Democrats running for lieutenant governor, attorney general or comptroller broke 38 percent; in 2010, the party didn’t even field a candidate for comptroller. Republican Comptroller Susan Combs coasted to re-election with 83.2 percent of the vote.

As they say in the mutual fund ads, past performance does not guarantee future results. At the least, when the votes are counted on Nov. 4, you’ll be able to see the results in context — whether they're breaking the historical trend or adding to it.