We leaned on the news for our questions this week, asking our insiders in government and politics about recent events — and future ones — that might have political import.

Most of the insiders — 73 percent — do not think an October surprise, if there is one, would affect the results of this year’s elections. Ebola is driving headlines in Texas at the moment, but not elections: 80 percent do not expect the handling of that crisis to affect any elections this year, while 16 percent said local or state elections, or both, could be affected.

Three in five insiders said Gov. Rick Perry will never go to trial on the indictments handed down earlier this year (his lawyers are currently challenging the charges).

Finally, we asked about the same-sex marriage lawsuits going on in the federal courts and 47 percent of the insiders said that law will remain legally unsettled a year from now; 27 percent think those marriages will be legal in a year and 24 percent think they will be illegal. Only 2 percent checked the box next to “Don’t know.”

As always, we collected verbatim comments along the way and a full set of those is attached. Here’s a sampling: 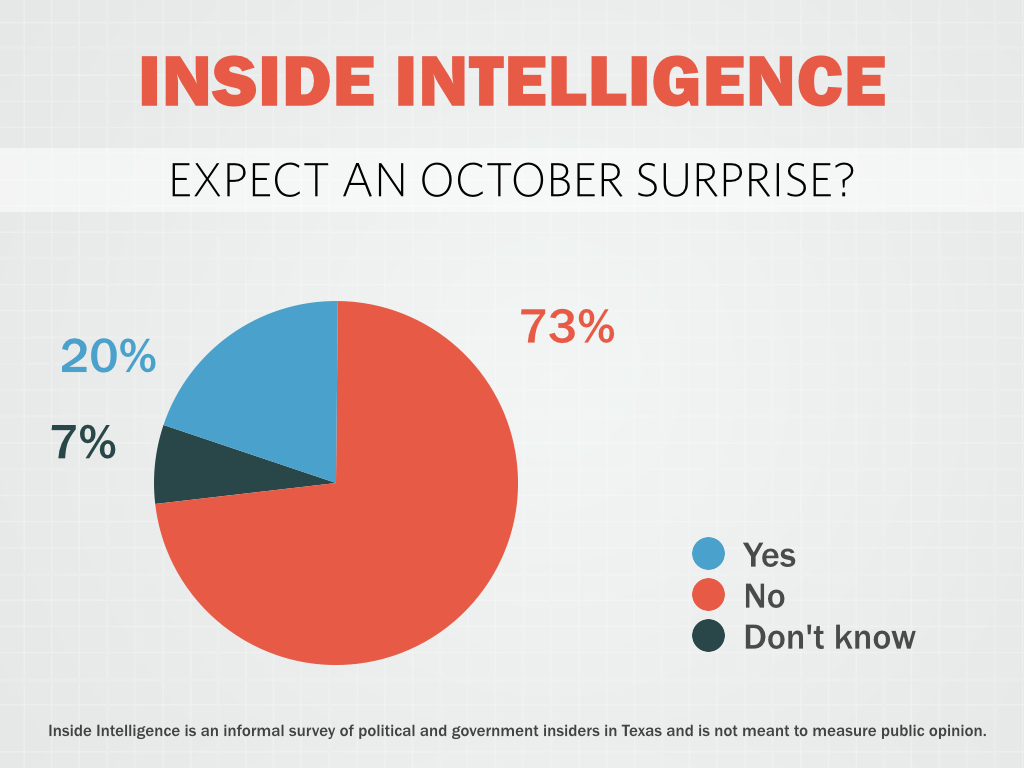 Do you think this year's election results could be affected by an October surprise?

• "There is so much noise with the Ebola, Middle East, Somalia, economy, government gridlock and sundry Washington scandals that a surprise cannot get through. "

• "Voters are more savvy so the tactic is less effective."

• "It's the beauty of Octobers and elections - there can always be a surprise of some sort and often what is expected or routine for some is a surprise for some one else."

• "Seems like there's always something lurking out there . . . but it would have to be a big something to make a difference."

• "Could be, sure. But the efficacy of October surprises is not as great as once was before the time of instant communications. It used to be a surprise could be rolled out and the opposing candidate would have no time to respond. With the expansion of 24 hour news, social media and around the clock campaign operations, campaigns can respond to almost anything." 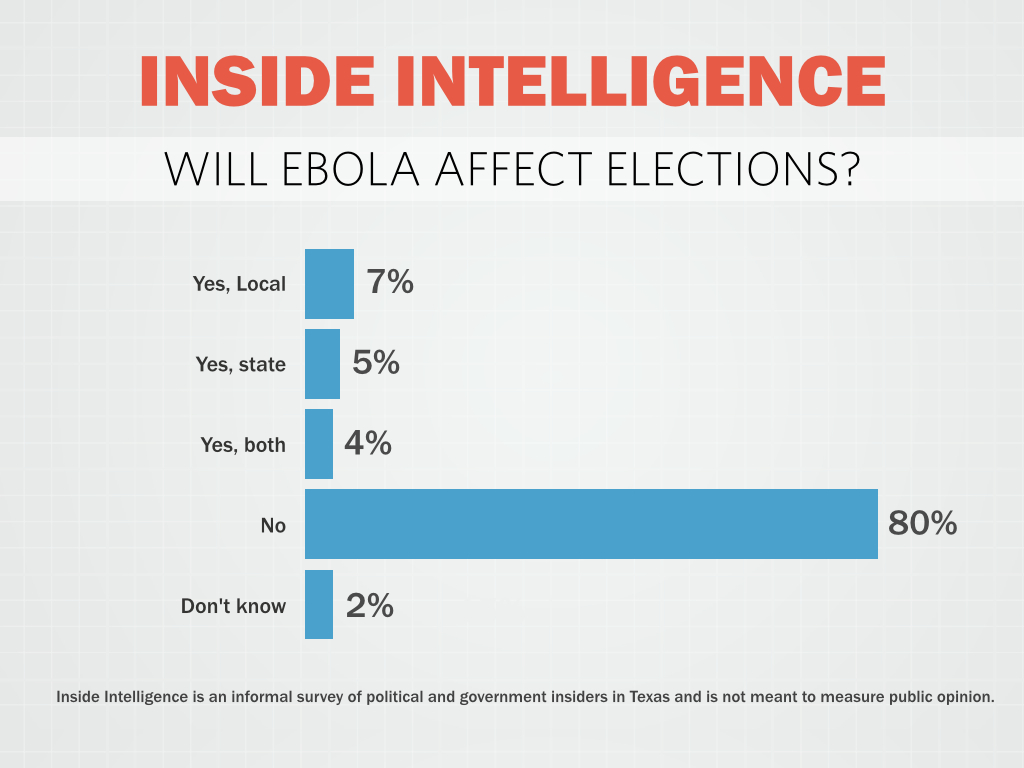 Will government officials’ handling of Ebola in Texas figure into this year’s elections?

• "Already has. The Washington DC gridlock and general incompetence has negatively impacted the public's confidence in governments ability to do anything."

• "Dallas' Mayor and County Judge are DISASTERS! It should cost the Democrats."

• "Maybe in Dallas but not beyond."

• "What could possibly go wrong with Texas' handling of a deadly and highly contagious virus, with no known cure?"

• "It seems the elected officials were all over it. To the extent there was any issue, it was within the hospital itself, where information was not properly shared." 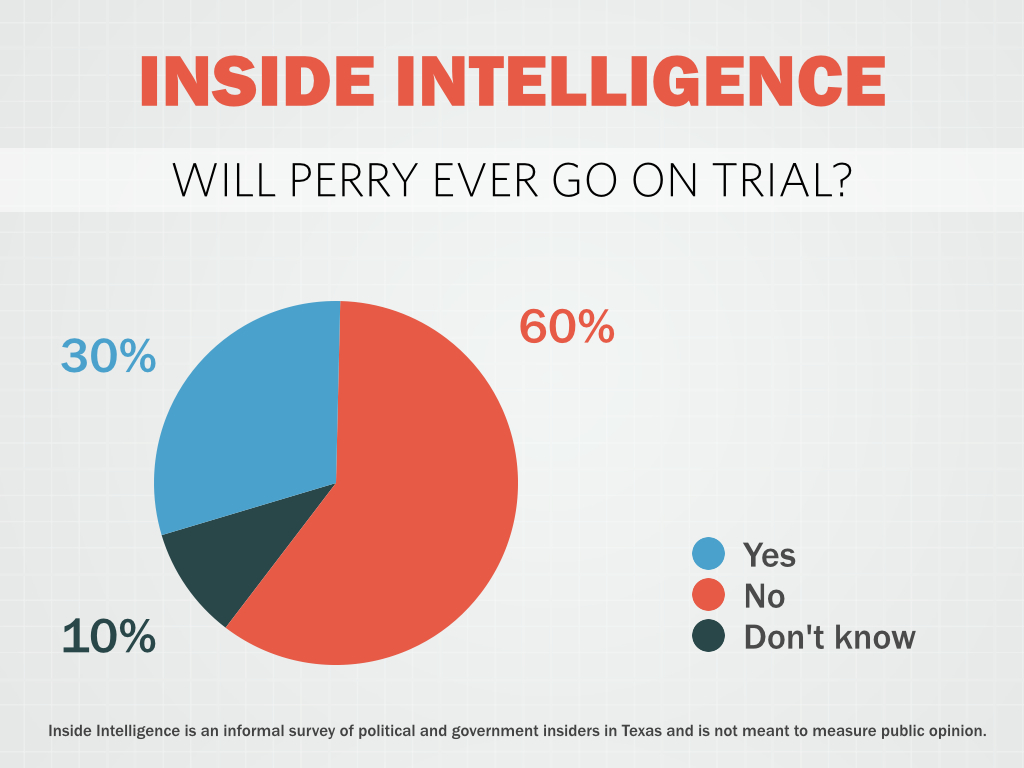 Will Rick Perry ever go to trial after his indictment earlier this year?

• "What's the incentive for the State to drop its charges? If it does, it effectively proves Perry's point that it was all political."

• "Somehow, the battery of lawyers who have been retained should be able to get him out on some technicality."

• "A trial in Travis County is possible, and even a conviction. Will that conviction be upheld - No."

• "Nobody in the elected class, including judges, thinks a trial is a good idea. They'll try to get it taken care of without a trial." 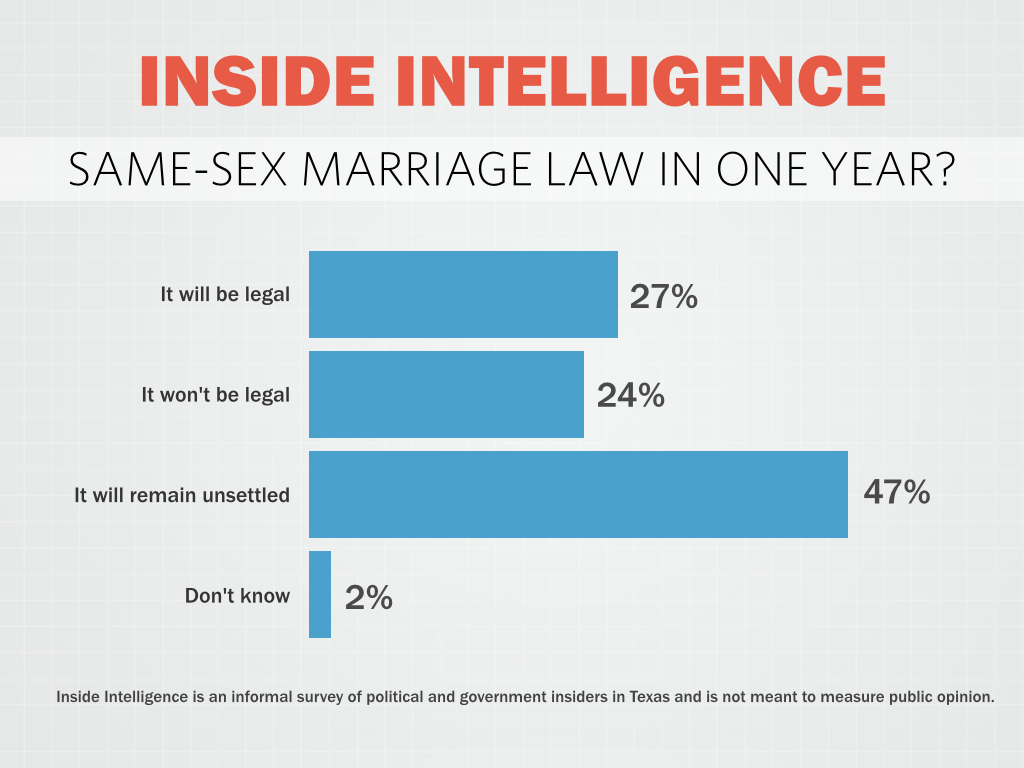 What will be the law on same-sex marriages in Texas a year from now?

• "It should always be illegal as it is an illicit disgrace to the sanctity of marriage. Society should not have to accept or tolerate sinful behavior. If someone chooses to make bad choices then they should ensure the consequences of those. Everyone else should not be expected to embrace, recognize or fund their behavior."

• "The 5th Circuit is reviewing briefs now on Texas law and constitution. That court is less activist than the others that have rammed the issue in other states--AGAINST the will of the people."

• "Like it or not, gay people in Texas having a legally binding union is Inevitable."

• "The 5th Circuit will overturn the Texas law but the Supreme Court still will not have taken up the issue. "

• "US Sup Ct will legalize it for all states, but a year from now it might remain unsettled."