MENTONE, Texas — On a recent afternoon, leaders of the V.V. Water Company visited Loving County officials to talk about how they could help the West Texas county meet its growing water needs.

Loving County, which has 95 residents, according to a 2013 Census Bureau estimate, making it the least populated county in the lower 48 states, has a public water supply system. But with the Permian Basin’s flourishing oil and gas industry, county officials expect that they will need more water to accommodate growth.

Loving County Judge Skeet Jones said it would not take much construction to affect the county’s resources. Just in the unincorporated community of Mentone, he said, three houses are being built.

“If a family of four moves into each housing unit,” Jones said, “that’ll be 12 people that will increase our population nearly 13 to 14 percent.”

Joe Carter, managing director of the V.V. Water Company in Beeville, said the company had met with leaders in area counties about building a pipeline to bring in water from Val Verde County, hundreds of miles south of the Permian Basin.

“Things of this magnitude need to have a special effort,” Carter said. “We’ll be spending a lot of nights in Loving County and places nearby.”

Carter is among those spearheading the company’s latest attempt to secure customers for the rich groundwater supply in the Edwards-Trinity Aquifer in Val Verde County, where Del Rio and much of the Devil’s River are, and pipe it to 13 sparsely populated Permian Basin counties. With the drought now plaguing the state, plans to tap water-rich areas to benefit drier regions are growing in popularity, but critics say such endeavors hurt the ecosystem of the region losing water.

Previous efforts by V.V. Water to supply larger cities like San Antonio and San Angelo fell through amid skepticism and opposition from various environmental groups and local governments, many of which are vowing to fight this venture as well. But this time is different, the company says, because it is trying to entice area oil and gas companies as customers to help lower the potential cost for the small communities. 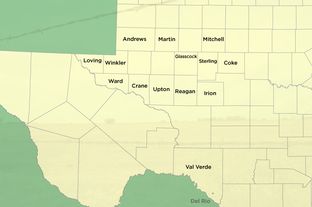 Under the latest proposal, the 13 Permian Basin counties would form a transportation authority to borrow money based on its ability to sell water to commercial and residential customers.

In 2013, the city of San Angelo rejected a V.V. Water proposal to bring in water from Val Verde County.

San Angelo Mayor Dwain Morrison said it was less expensive for the city to continue providing its own water. Plus, he said, since V.V. Water did not have any pumps, wells or financing, the city doubted that the terms of the contract could have been fulfilled.

“About all they had was a real pretty little brochure,” Morrison said. “I think what we would say in West Texas is, ‘It’s all hat and no cattle.’”

Carter said the company had since secured a “substantial number” of leases with landowners in Val Verde County, and some oil and gas companies in the region were considering proposals to become customers, making the pipeline affordable for homeowners in these communities. V.V. Water is also looking into applying for a state loan or grant from the Texas Water Development Board, he said, to further lessen the burden on residential customers.

While Carter declined to disclose a projected cost or route for the pipeline, he estimated that 8 to 16 billion gallons could be withdrawn each year, “depending on demand.”

Citing a May hydrogeological study, he said that there was ample water to support the pipeline proposal without harming the sustainability of the Edwards-Trinity Aquifer.

The study was limited to the part of the aquifer within the county lines. A study of the entire watershed is being done by the Southwest Research Institute.

Environmental advocates say such projects do not take into account the overall impact of such pumping. Laura Huffman, the director of the Nature Conservancy of Texas, said that pumping groundwater from the Edwards-Trinity Aquifer would harm Devil’s River because of the connection between the aquifer and the river. Huffman said that could affect the area’s wildlife, and further endanger threatened species, such as the Devil’s River minnow.

If aquifer water is diverted to a water well field, less water flows into the lower Rio Grande, said Ron Green, who is leading the Southwest Research Institute study. A third of the Rio Grande’s water comes from Val Verde County, he said.

But Carter said the well field that would feed the potential pipeline would draw water downstream, “at the very last point before it goes out onto the river and evaporates.” Because of that, he added, points upstream would not be affected.

Some Val Verde County residents are concerned that proposals to export groundwater could hurt their future supply.

“If we had our way, we would not have anybody coming in here and exporting our groundwater,” Mike Wrob, a Del Rio councilman, said. “But that’s not really realistic. All we can hope to do is regulate it so not too much is taken.”

The city has hired lawyers to draft legislation to create a Val Verde Groundwater Conservation District that they plan to submit to lawmakers this month. Unlike much of the state, Val Verde County has no entity to regulate groundwater pumping, stoking fears that such a project could easily drain the resource.

“Without one, it is kind of open season right now,” Wrob said.

The absence of a groundwater conservation district also creates uncertainty over exactly how much groundwater would be available, and for how long.

Carter said the existence of a conservation district would not create certainty. As long as more is flowing in than is taken out, “how much water will be in the aquifer and for how long is simply a matter of math,” he said.

Mayor John Jacobs of Robert Lee, a city in Coke County, one of the 13 counties that would get water under the V.V. Water proposal, says the region needs the pipeline. He is uncertain just how long his city, which about 1,000 people call home, will have water.

For more than five years, the city has been under water restrictions. It pipes in water from a town 11 miles to the east, but officials know it is only a matter of time before that water runs out.

“I hope it goes through,” Jacobs said of the pipeline. “But too many things have to come together. I’m afraid it’s going to be a long while.”

Carter said the company could begin piping water to Mentone by 2016. But between intense opposition and legal hurdles, many within the industry believe it will be no less than five years before the first drop of water is transported.

“Giving water to someone is like giving life to someone,” Carter said. “The vitality of these communities is essential to the entire state.”

Disclosure: The Nature Conservancy of Texas is a corporate sponsor of The Texas Tribune. A complete list of Texas Tribune donors and sponsors can be viewed here.