Fresh off of a State Auditor’s report on mismanagement of the Texas Enterprise Fund — that grants had been made without applications and that oversight of beneficiaries’ promised performance was spotty at best — we asked our insiders in politics and government about the fallout for the program and for anyone who might have had anything to do with it.

Most said that in spite of the troubles, the state should continue to use economic development funds to lure business and jobs to the state. About a third said the TEF audit could lead lawmakers to kill the fund and others like it; 46 percent said it would not.

The insiders were split when asked whether the news would affect Gov. Rick Perry’s political future, with 41 percent saying yes and 49 percent saying no. And most said it would not affect any of the current statewide races, although 29 percent said it could affect the race for governor.

We collected verbatim remarks along the way and a full set of those is attached. Here’s a sampling: 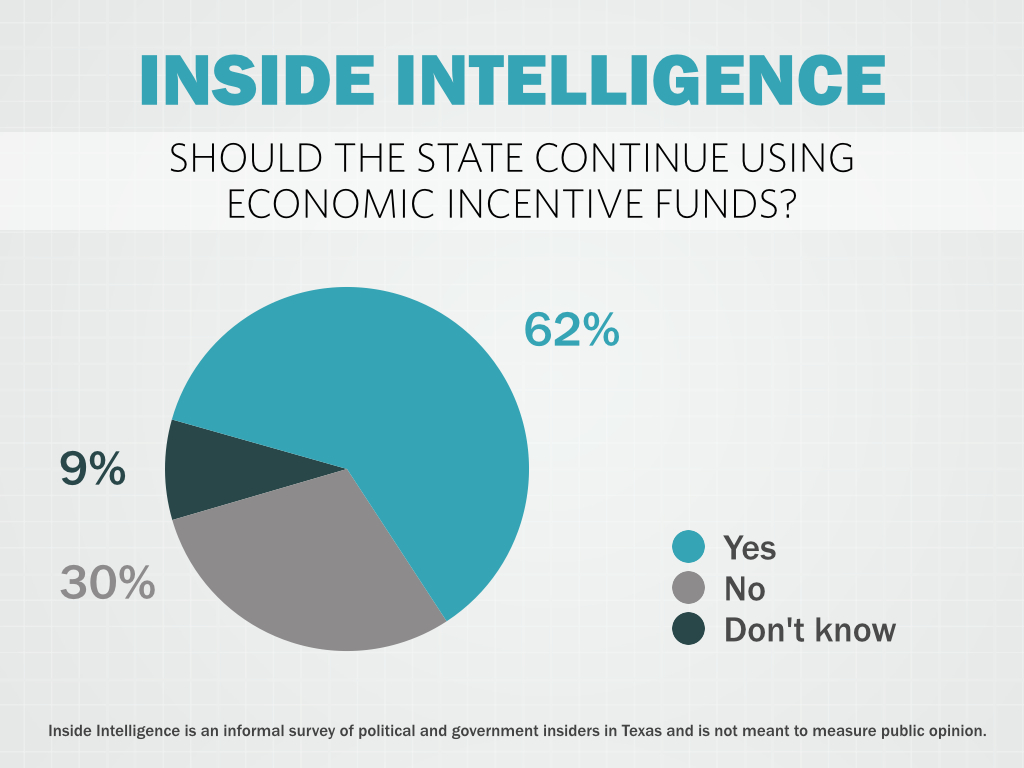 Should the state continue to use incentive funds to promote economic development and to lure companies to locate or expand in Texas?

• "Bet the ranch that other states will continue to do so (see e.g., Tesla and Nevada). Texas HAS to continue to play the game if it wants to remain competitive in attracting new companies to the state."

• "But there should be an independent board that oversees the fund. No more cronies holding the checkbook."

• "Texas leads the nation in job development. Why change what appears to be working."

• "Only if there will be oversight, measurables, and accountability"

• "But it should be very limited and require written contracts. There may be instances where it is necessary to compete with other states. The primary incentive should be some type of tax abatements."

• "Governor Perry's administration of these economic development funds has made Texas look like a banana republic, minus the meticulous paperwork."

• "Yes but should be run through special board or an agency like Comptroller's office with direct legislative oversight."

• "It looks too much like 'pay to play.' Yes. But the programs should be monitored and evolved to focus on what incentives work best and to broaden measures of success beyond direct jobs created to include indirect jobs, capital investment and secondary economic impacts."

• "I say film incentives only. We lose many film projects to other states." 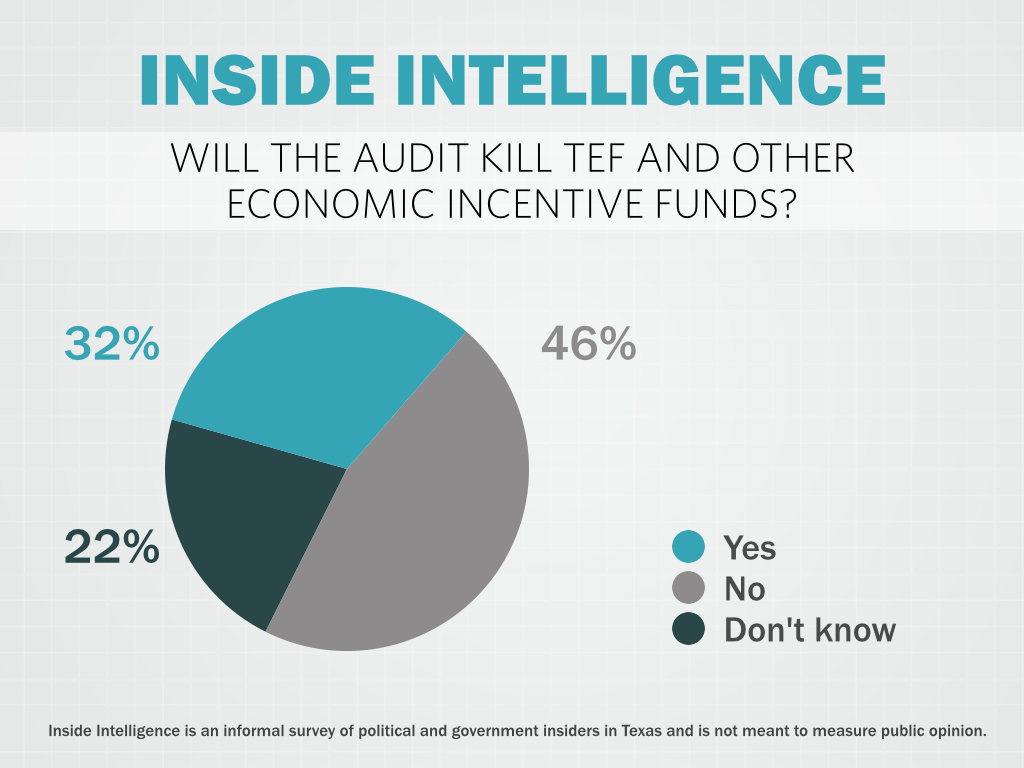 Will the state auditor’s findings about mismanagement of the Texas Enterprise Fund lead lawmakers to kill that program and others like it?

• "It will unwillingly force the legislature to enforce a set of minimum standards on the process."

• "The report will be one of several forces that will combine to kill the program."

• "The Enterprise and Emerging Tech funds were in trouble anyway. Hopefully the skepticism will extend to Chapter 313 school property tax abatements, which cost the state multiples of what's wasted on the high-profile funds."

• "Some will certainly try, but if administered properly, TEF can be a great asset to the state."

• "Too many vested interests, but a Tea Party/Dem coalition could do it. That would be a shame as the state needs some tool to compete with other states or stimulate a new, cutting edge business. Oversight with measurable policy objectives is the key. #ThisIsWhyWeCantHaveNiceThings"

• "Legislature will likely take its cue from Governor Abbott. He's now extremely vulnerable on this issue because of his AG rulings, and if he's smart, he'll kill or trim back both incentive programs." 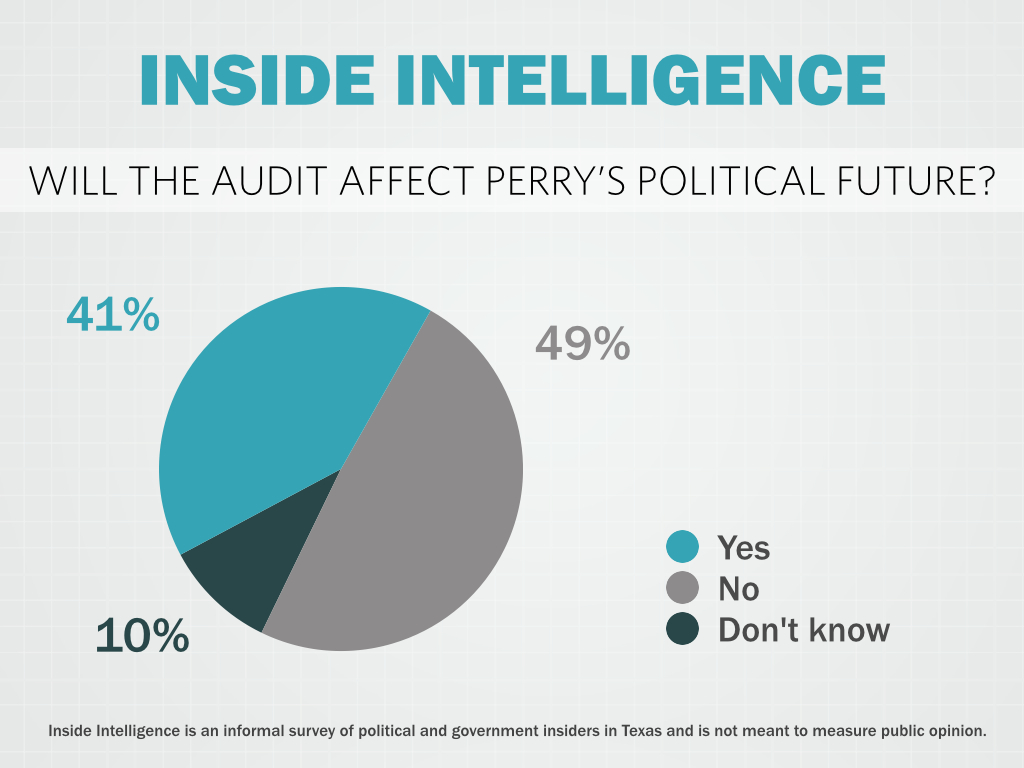 Will the state auditor's findings about TEF have any effect on Rick Perry’s political future?

• "That ship has sailed. No one outside of Austin has any idea what TEF is or does."

• "Further confirmation that Governor Perry's rein has been shockingly under-reported and under-investigated. There is blood in the water."

• "The Auditor's report suggests an astounding lack of concern for taxpayer funds and an administrative inefficiency that is fairly breathtaking. Perry's Republican presidential primary opponents, should Perry run and he seems to be pointing toward it, will very reasonably use this against him."

• "Perry's credential as a presidential nominee is his claim to have run, or managed, a large enterprise. (Unlike Sens. Obama, Cruz, Rubio, Paul.) This is how he has managed -- corruptly."

• "He has already sunk his own political future and doesn't need any more help." 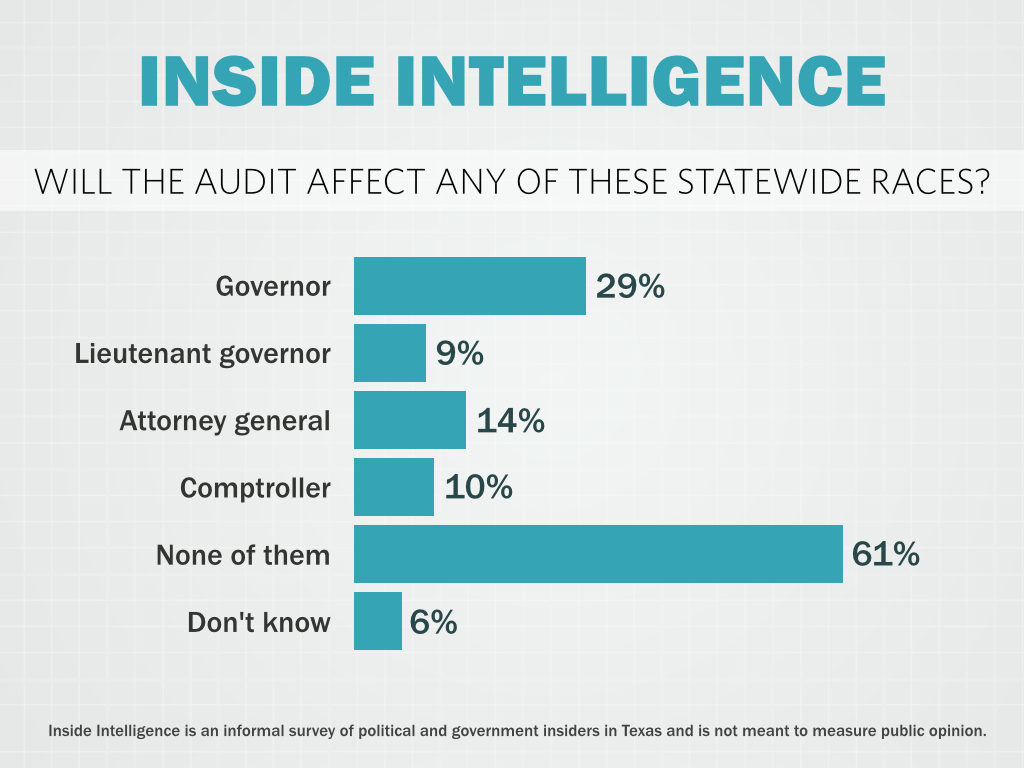 Will the state auditor's findings about TEF operations have any effect on any of these statewide races this year?

• "Early voting starts in two weeks. Voters already know who they are voting for. This issue does nothing for anyone."

• "The list should include all of those in the legislature who voted to create and fund these programs, and those who voted against bringing additional transparency. That said, only insiders and corporate types are going to care about this."

• "In the end, the report won't change the outcome of any election. It will just provide some bilious fodder for campaigns."

• "Every candidate will agree that more oversight needed and none will suffer from it."

• "If Davis was unable to get traction on CPRIT against Abbott, how can this TEF issue make any waves at all?"

• "Ugh the statewide elections are already over, nobody has told you?"