A federal judge in Corpus Christi heard closing arguments in the lawsuit challenging the state’s voter ID law this week and could rule any time. That case is expected to be appealed either way and could eventually land in the nation’s highest court. In the meantime, we asked our insiders in government and politics about the law.

Who benefits from it? Republicans, according to 59 percent of the insiders, while 19 percent said neither party benefits and another 16 percent said both parties do.

We collected verbatim responses along the way and a full set of those is attached. Here’s a sampling: 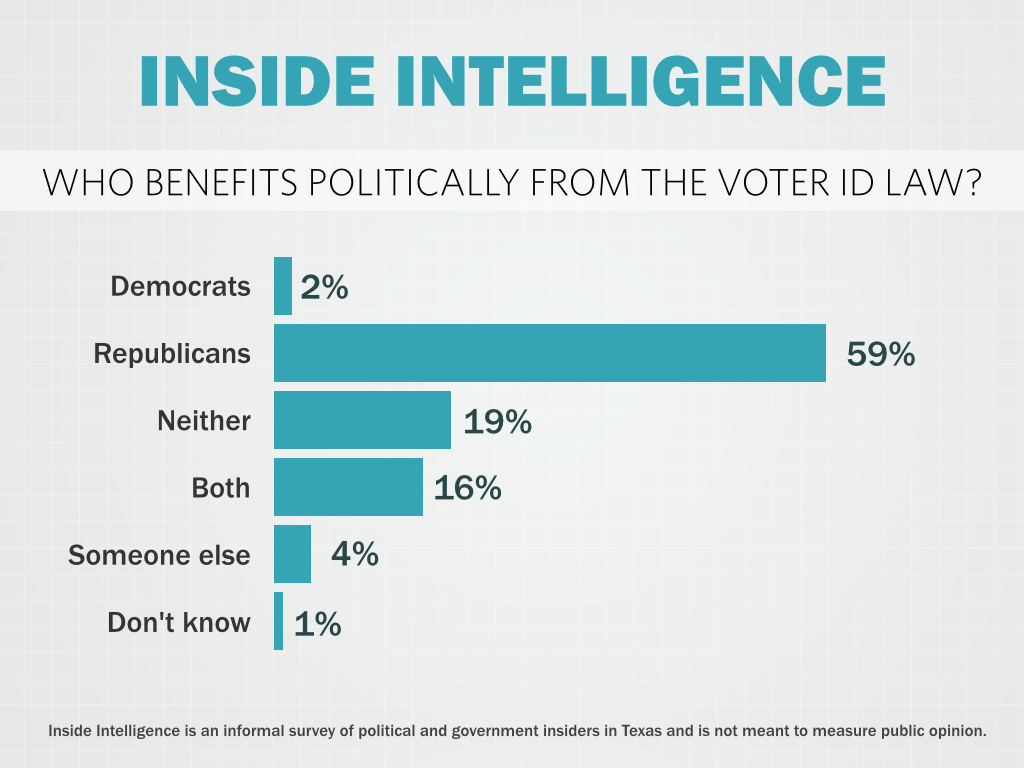 Who benefits politically from the state’s voter ID law?

• "No question - the populations that Democrats are most interested in mobilizing are among the least likely to have the most common forms of government-issued photo IDs."

• "Voters want to know that elections are fair. The party that champions the issue will earn the goodwill of the voters."

• "Everyone has the confidence that all election returns reflect the choices of legally registered voters."

• "The purpose is NOT to benefit a party, but to bring integrity to elections."

• "The issue benefits both. RS get to say 'We're protecting the ballot box!' Ds get to say 'They're suppressing the vote.' Good hollow rhetoric for each side."

• "Increasing public confidence in elections is beneficial to everyone."

• "In the beginning the Republicans benefit. Over time it will level out. There is no reason you shouldn't have to show an ID and there probably would have been much less push back if it had been rolled out over one or two election cycles." 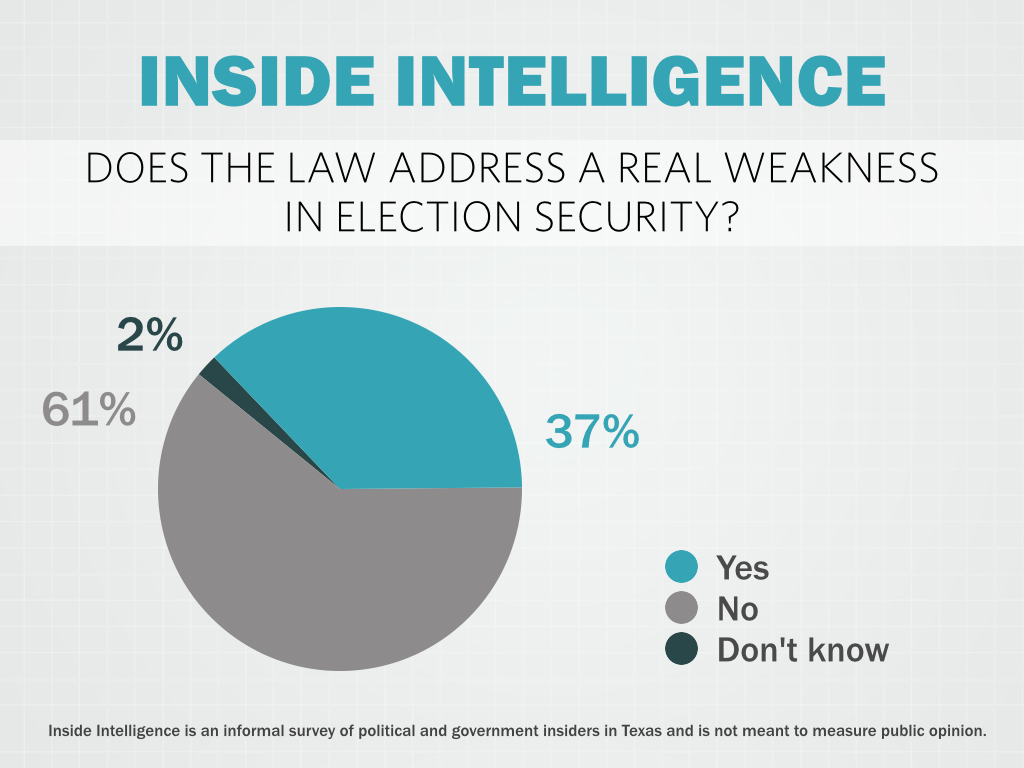 Do you think the law addresses a real weakness in election security?

• "Without requiring photo identification, it is easier for those who wish to undermine the system to do so."

• "But it makes it more efficient and can protect against future misuse."

• "Yes, but at about the same rate as preventing 18 year-olds from buying beer."

• "How else do you prove who you are without a photo ID?"

• "Indeed. Voter fraud is a real issue. Anyone who's worked the polls or done poll watching can vouch for that."

• "Your question implies that our elections are insecure. That isn't the case, unless you wish to focus on the threat posed by digital manipulation of the ballot box."

• "The real security weakness is in mailed ballots."

• "While I doubt the problem was epidemic, I am confident there were abuses. There no doubt will continue to be abuses, but this makes it harder."

• "Rand Paul is right. Voter ID is a racist power grab by people who know their ideas will not secure an electoral majority." 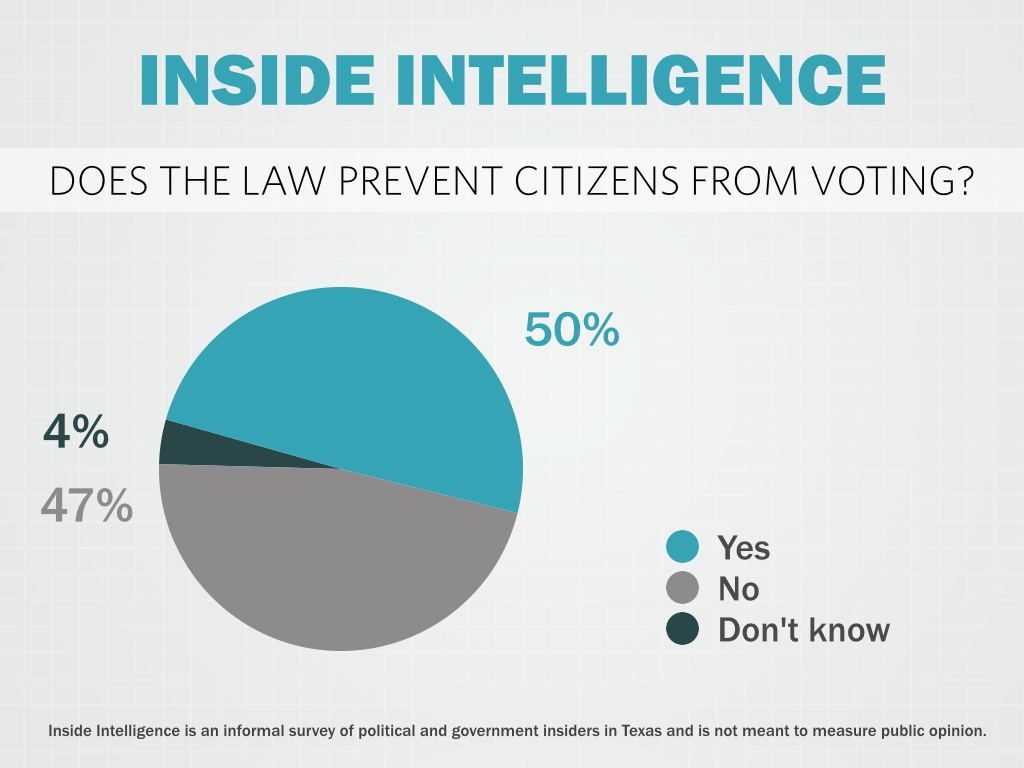 Do you think the law prevents legitimate voters from voting?

• "Absent the occasional octogenarian featured on the local news, Texans have grown used to having to provide positive ID in any number of settings (pharmacies, airports, payday lenders...), what's one more?"

• "We don't know yet. But it's hard to imagine good faith reasons why Republicans in the Texas legislature have opposed proposals like allowing college IDs as acceptable forms of voter ID, and even printing a voter's picture on their voter registration card."

• "Most of the 'legitimate' voters are sitting at home watching American Idol."

• "I think that people who are registered to vote, likely have ID, and it is unlikely that they feel intimidated by the process of having to show their ID. You must show ID to cash a check, use a credit card, catch a flight, receive healthcare at a doctors office/hospital/clinic, have healthcare paid for by insurance (private insurance and Medicaid). I think that it is a common part of our everyday lives."

• "Yes. I know republicans don't want to believe it but there actually are some people who DO NOT have a photo id! And yes, they live, work and conduct business without a photo id - they do not fly, they have had an account at the same bank for DECADES and they are well known in their communities." 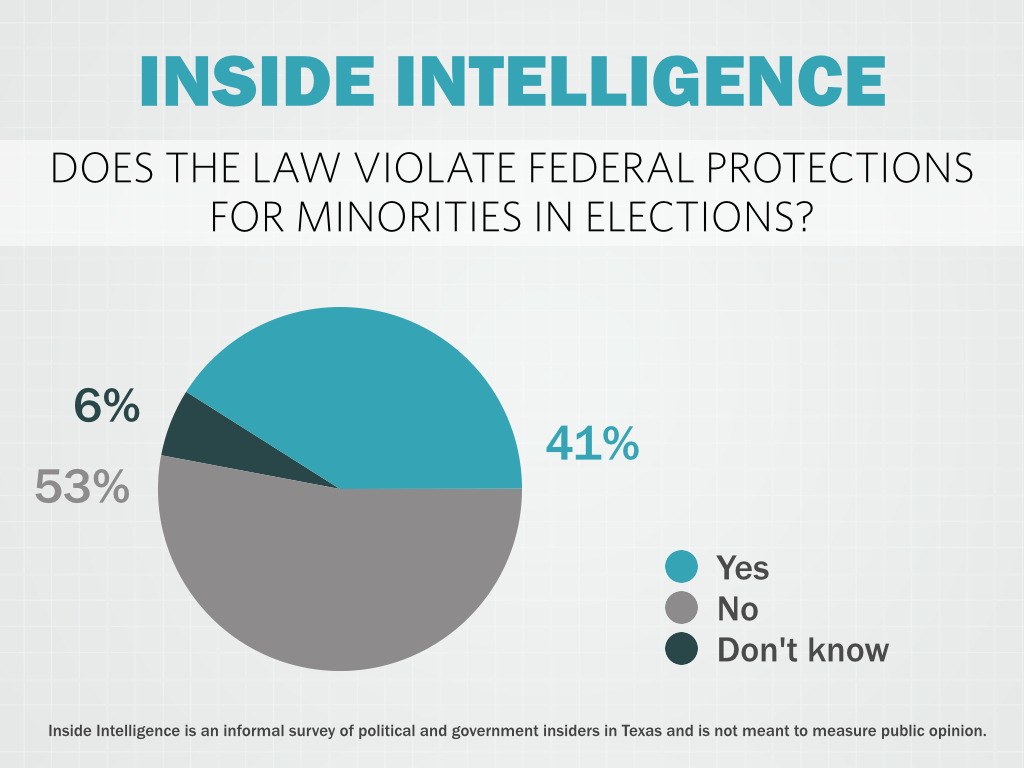 Do you think the law violates minority protections in the federal Voting Rights Act?

• "Unless it is coupled with an effort to prevent minorities from obtaining IDs available to all Texans, how can it?"

• "Race is NOT the issue. Voter integrity is and it benefits everyone."

• "Well of COURSE it does, that was the intention of the law! It was a 'legal' way to suppress minority voting!"

• "The law upholds minority protections by ensuring their vote is not diluted by the vote of those who are not eligible to vote." 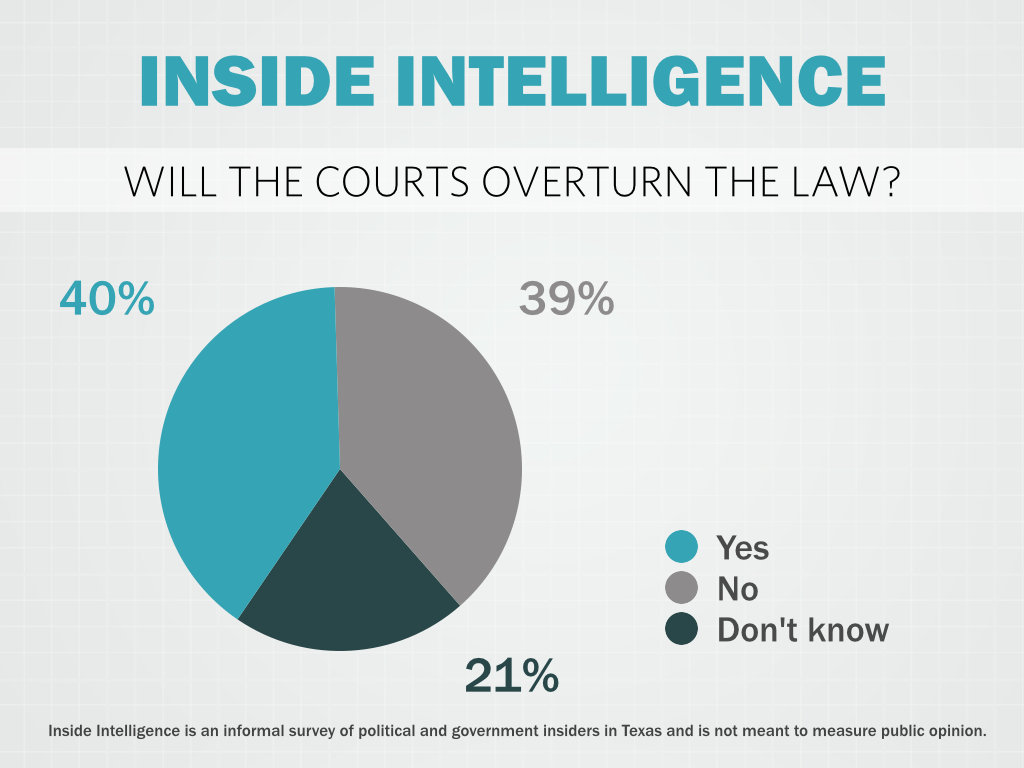 Do you think the federal courts will overturn the law?

• "It won't be impossible to find a crack-pot district court judge to overturn it in the first instance, but the law will ultimately stand."

• "I learned long ago to not predict an outcome with a federal court."

• "One thing we all have to acknowledge is that the majority party is fairly sloppy when writing these laws. Almost everything they do gets overturned."

• "Maybe the district court will throw it out. Then the 5th Circuit will reverse. And the Supremes will go 5-4. One way or the other."

• "This particular court may try to overturn it. Venue shopping trip may have been successful."