We're entering the season of political debates, so we queried our insiders in politics and government about those perennial campaign events.

The “debate debate” that seems to precede these affairs prompted us to ask whether a candidate’s willingness — or unwillingness — to debate has any effect on voters’ choices: 55 percent said it does not.

Finally, we asked the insiders to rank different ways to get to know more about candidates and debates came in second — behind one-on-one interviews and ahead of town hall appearances and news stories. TV commercials, by the way, came in last in that ranking.

As always, we collected verbatim remarks along the way, and a full set of those is attached. Here’s a sampling: 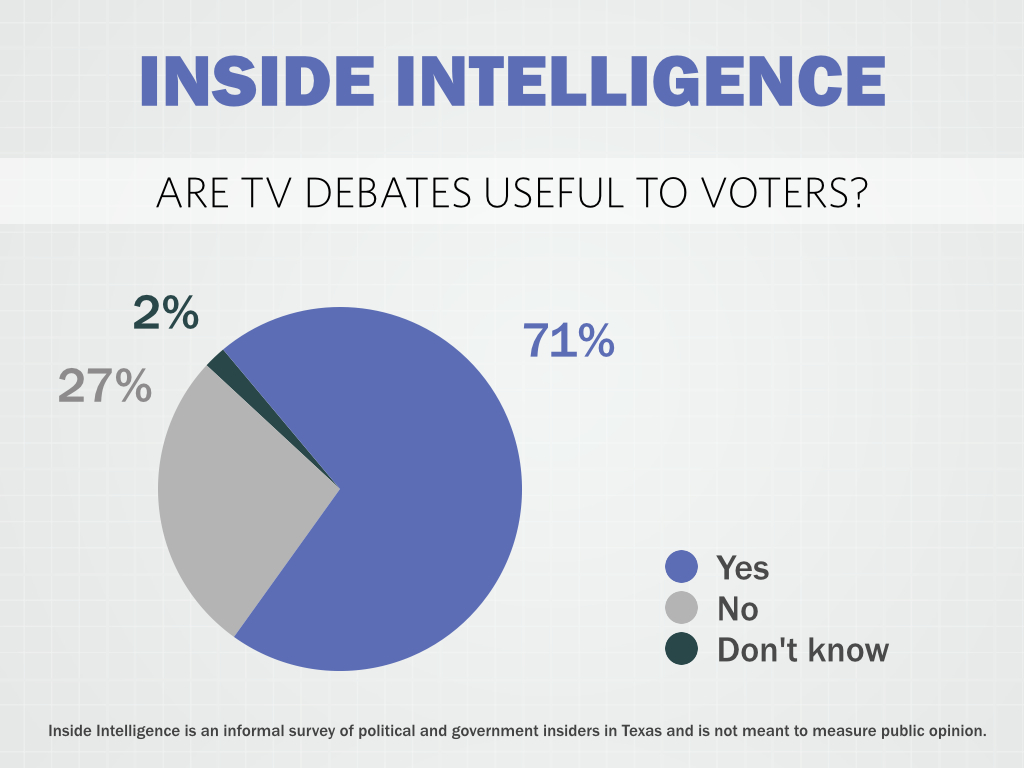 Are televised debates in high-profile political races useful to voters?

• "They could be useful to voters if the moderator's intent is not to instigate, but to facilitate a debate on issues Texas voters care about."

• "It helps for the voters to see the candidates in other than a political ad, and in situation where the candidates are responding to questions without a script. For the candidates it is an opportunity for either leaving a very positive impression on those viewing the event, or making a major mistake. That may assist voters see how the candidates will function in day to day governance."

• "A cage match with sharp objects would be a better use of time and generate higher ratings. The only people who watch are partisans who have already made up their minds. Real people are watching Honey Boo Boo, Duck Dynasty, and replays of the 1973 Super Bowel highlights."

• "Why risk an 'oops moment' and give your opponent life if your the front runner. Debates are for those currently in second place."

• "While many voters may not tune into the debate, they will most likely hear about it through social media and press coverage. It is a core element of democracy..."

• "They are a circus performance held for the gratification of the media. The public doesn't watch and doesn't care."

• "No, they're not useful to serious voters, because today's debates don't allow a candidate to fully explain his/her position or challenge the other feller's. Sound bites don't educate serious voters."

• "Outside of the political class NO ONE CARES. There is a normal world out there where people live their lives. It does not involve political people. In that world the important things have more to do with the kids getting up and going to school, dad/mom having a bad day at work and what our parents are doing. They don't care about 2 boring people arguing while a bunch of arrogant press sit around acting like they know everything and are above it all. One day the normal people will rise up and both the political people and the press out of work." 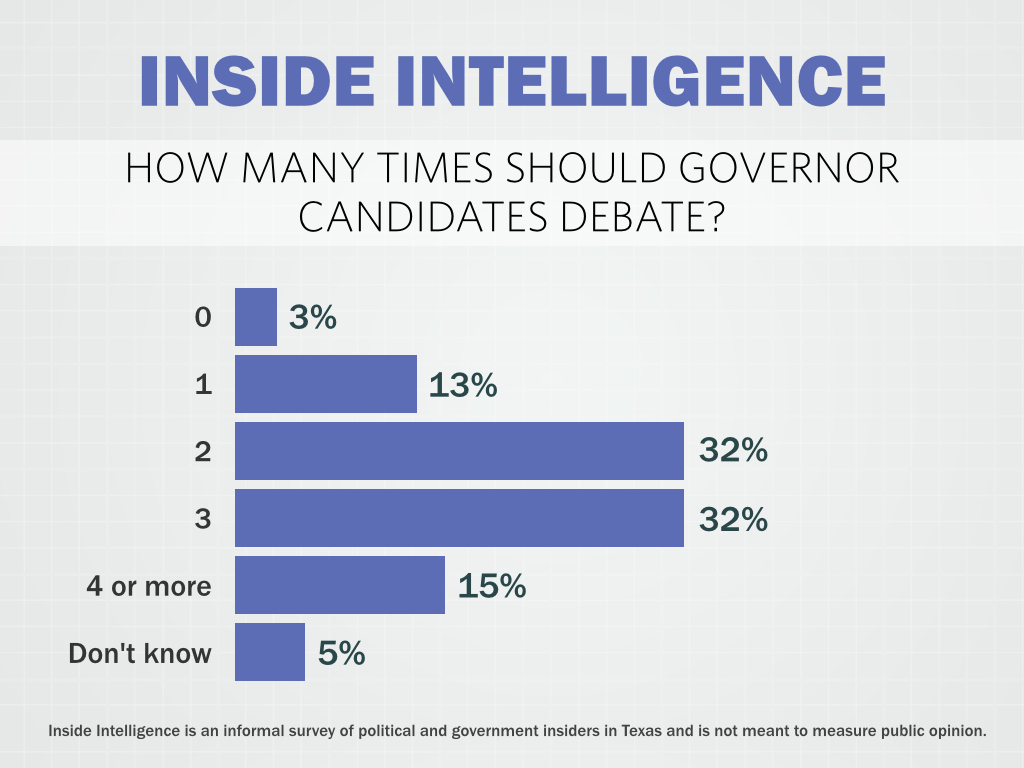 How many statewide televised debates should there be in the race for governor?

• "An hour long debate should provide enough time for each candidate to separate themselves from the other. The problem is that the only people who actually watch the debates are those who already know how they are voting."

• "This state has 26 million people in it. The person who governs it must be up to the task. We deserve to see our candidates prove themselves in intellectual combat over the course of at least four encounters."

• "Two and only two. Anyone who says the more the better is simply a wonk and glutton for (political) punishment." 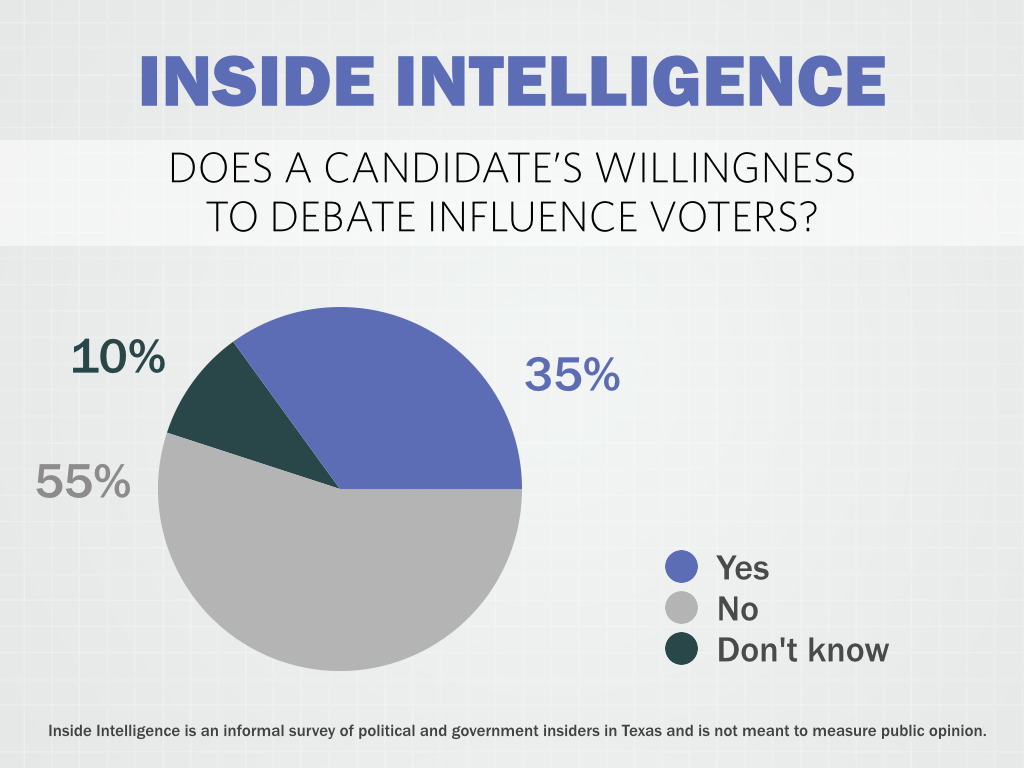 Does a candidate's willingness or unwillingness to debate have any effect on voters' choices?

• "Voters may tune in if there is a debate, but won't care if there isn't one."

• "If the voters are engaged. I hate to bring it up but remember Ted Cruz's duck that used to follow Lt. Governor Dewhurst around?"

• "If a tree falls in the forest...nobody cares about this outside the Austin bubble."

• "It could add to their opponent's narrative on the candidate but for the most part these negotiations are very inside baseball and don't move poll numbers."

• "It probably doesn't, but it should. It's understandable why the leader in the polls might not want to risk tripping up before an audience of voters, but if he or she wants to be the leader of the people, then that person should have enough courage and confidence to face potentially tough situations."

• "A candidate's ability or inability to debate is not a relevant qualification for the job. It's not part of the job description. He or she doesn't face weekly questions like the Prime Minister in England."

• "Debates (like newspaper editorials) are relics of the political past. Candidates have proven they can win without showing up for either. Few votes (if any) will be swayed by - what the political media believes to be - the big debate scheduled on a (high school football) Friday night in the Rio Grande Valley. Few people will see it. Even fewer will read about on Saturday." 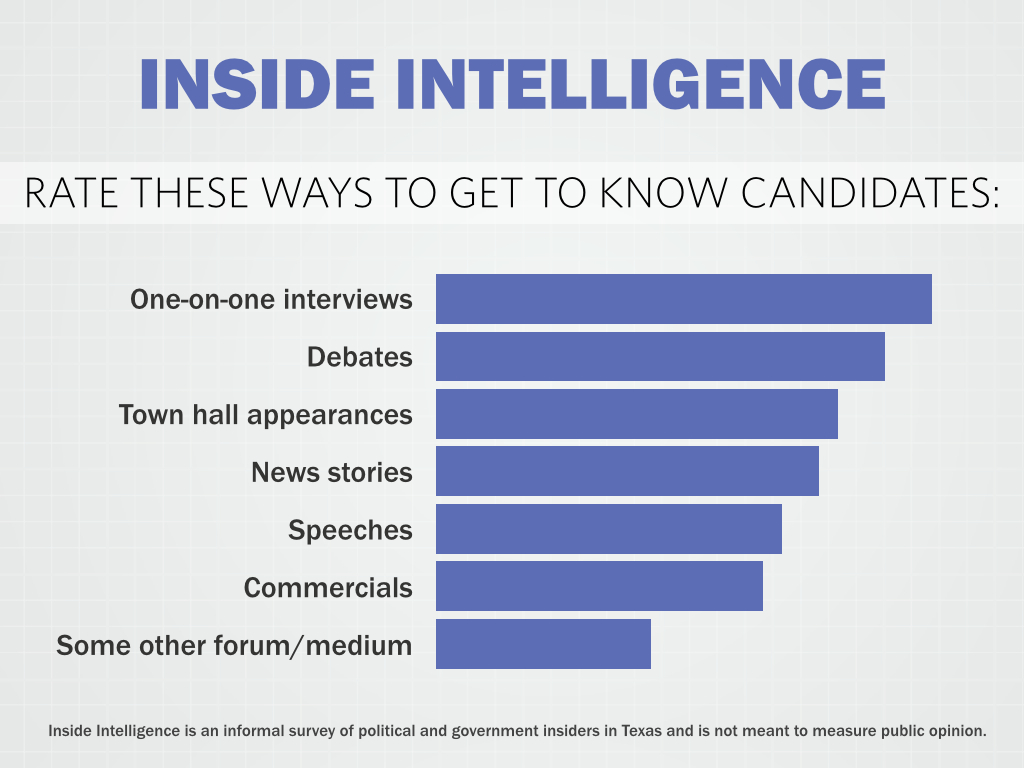 Rank these different ways to get to know more about candidates:

• "How voters can be informed, people cry a river of tears about being busy, not time to vote, cannot find the info, BS, it is there quit being lazy, and as I said earlier, maybe we need to teach civic engagement in school, no, not that crap about anti all of this and protesting, I mean why you should be engaged, what happens if you are not, how important it is, how little time it takes to vote and be informed."